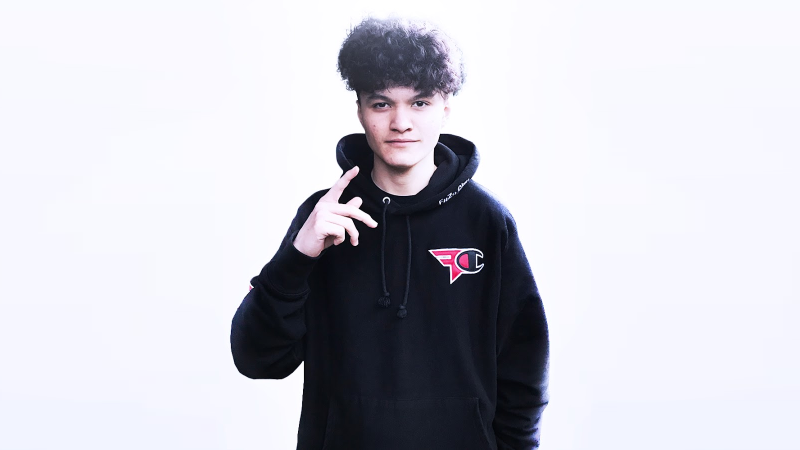 Photo: FaZe Jarvis
To sign up for our daily newsletter covering the latest news, features and reviews, head HERE. For a running feed of all our stories, follow us on Twitter HERE. Or you can bookmark the Kotaku Australia homepage to visit whenever you need a news fix.

Jarvis Khattri, a YouTube content creator for the esports organisation FaZe Clan, received a lifetime ban from Fortnite earlier this week after releasing a video of him cheating in the mega-popular battle royale shooter. This has since given way to discussion about the severity of the punishment and whether content creators whose livelihoods depend on these games should be banned at all.

In the offending video, which has since been deleted but can still be viewed via third-party uploads, the 17-year-old Khattri demonstrated use of an aimbot, a hack that allows players to fire off quick headshots with pinpoint accuracy. These kinds of cheat programs have been prominent and controversial in online shooters for decades. Khattri wasn’t taking part in any kind of official tournament or competitive play and didn’t link viewers to where they could purchase the hack. He did, however, know enough about the risks of using the cheats to open a new account rather than use his main one, and he repeatedly tells viewers not to use aimbots and worries about being banned during the video. Still, shortly after the video was shared with his two million subscribers, Khattri was hit with a lifetime ban from Fortnite developer Epic.

Khattri took it upon himself to announce the ban to his subscribers in an apology video released on November 3. It’s a fairly standard apology, during which he tells his fans to pay attention to the game’s rules so that they don’t receive the same punishment. He begins to choke up when he gets to the part about not being able to play Fortnite again—at least not as a career. “I just wish I could have known how badly I was messing up, because I would never have ever thought of even making those kind of videos if I knew that this could have actually happened,” Khattri said before breaking down in tears.

“Jarvis is an entertainer and content creator who streams and makes YouTube videos for his fans,” an official FaZe Clan statement given to Kotaku reads. “He’s doesn’t play professionally. He’s a 17-year-old individual who made a poor decision while creating content and even warns several times during the video to never use the aimbot technology. He continues to reflect on the repercussions of his actions and the serious error in judgment. FaZe Clan continues to support Jarvis in all areas of his career and believes unequivocally that he is a well-intentioned young man and his actions though clearly wrong were not malicious in intent.”

Khattri has been absent from social media since the announcement and was not available for comment.

Most responses to Khattri’s punishment were unsympathetic, but some people think that a lifetime ban is excessive, especially given that he’s a content creator. Tyler “Ninja” Blevins shared his thoughts on the matter during a November 4 stream. In Blevins’ mind, Khattri should have been given a suspension of six months to a year by Epic because his career ostensibly depends on Fortnite. Sure, most of Khattri’s content revolves around this one game, but there must be other games a significant amount of his two million subscribers would be interested in, especially when he has the backing of the popular FaZe Clan brand. While third-party stat tracker Social Blade only has estimates of his earnings, his videos regularly get millions of views. The kid is probably gonna be fine.

“There are lines, man,” Blevins says in a series of clips collected by Daily Clips Central and first reported on by Green Man Gaming. “There’s a difference between a content creator who has millions of subscribers, hundreds of thousands of followers, that gets banned from what literally makes him money, and some kid who is just a piece of shit, has absolutely zero following, has zero money that comes from Fortnite. It’s different. The stakes are different.”

After being called out by his Fortnite teammates for the obvious favoritism this shows to players who happen to be popular, Blevins reiterated his belief that content creators and average gamers are part of separate, distinct classes that need to be treated differently when it comes to punishments. He also noted the disparity between Khattri’s lifetime ban from Epic and the arguable slap on the wrist Logan Paul received from YouTube for filming a dead body in Japan, a comparison that’s mind-numbingly irrelevant—these are two different companies handing out two different punishments for two very different actions, after all.

Ninja isn’t the only one to compare Khattri’s punishment to that of others. FaZe Clan co-owner Richard “Banks” Bengtson compared Khattri’s punishment to that of Fortnite pro Damion “XXiF” Cook. Earlier this year, Cook was caught teaming up with other players in solo play and given a 14-day ban, but was still allowed to compete in the Fortnite World Cup. He and his partner Ronald “Ronaldo” Mach were booed by the audience when they appeared on the screen, with celebrations erupting as they were eliminated. The fact that punishments in the competitive world are shorter than those of people who play the Fortnite for fun is a strange contradiction, since the former is done with millions of dollars on the line while the latter’s stakes are drastically lower. Similar to Ninja’s sentiments, Bengtson wrote, “Fortnite is a huge part of [Khattri’s] life and I just don’t see the punishment (destroying a 17 year old kids life) fitting of the crime.”

When asked about Khattri’s future with Fortnite, FaZe Clan said they are looking to negotiate with Epic on getting the ban reduced or removed. Epic has been quoted in several outlets as saying, “We have a zero-tolerance policy for the usage of cheat software.” The developer did not respond to Kotaku’s request for comment.

“FaZe Clan is deeply saddened by the devastating impact this had had on Jarvis’s life,” the statement concludes. “But we remain hopeful and stand ready to work with Epic Games in any way possible to come up with opportunity that allows Jarvis to play again at some point in his life. Given Jarvis’s young age and his all-consuming passion and love for Fortnite, we believe a fair compromise can be reached.”