If you’re on the hunt for a new 4K flatscreen TV to hang on the wall, you’re thinking far too one-dimensionally. YouTuber Theremin Hero (aka Greig Stewart) rightfully realised that four screens are better than one, and hacked together this spinning LED-wrapped cube that provides a dizzying way to play classic retro games.

Be forewarned: if you’re easily prone to motion sickness, you might not want to stare at this creation for too long, because all those Christmas cookies you’ve been devouring could make a return appearance.

To save himself weeks and weeks of endless soldering, Stewart started with six pre-made displays from Adafruit, each featuring a 64×64 array of multicoloured LEDs. That’s just a resolution of a little over 4,000 pixels on each side, which is far less than even the ancient CRT standard-def TVs you grew up playing the NES on. 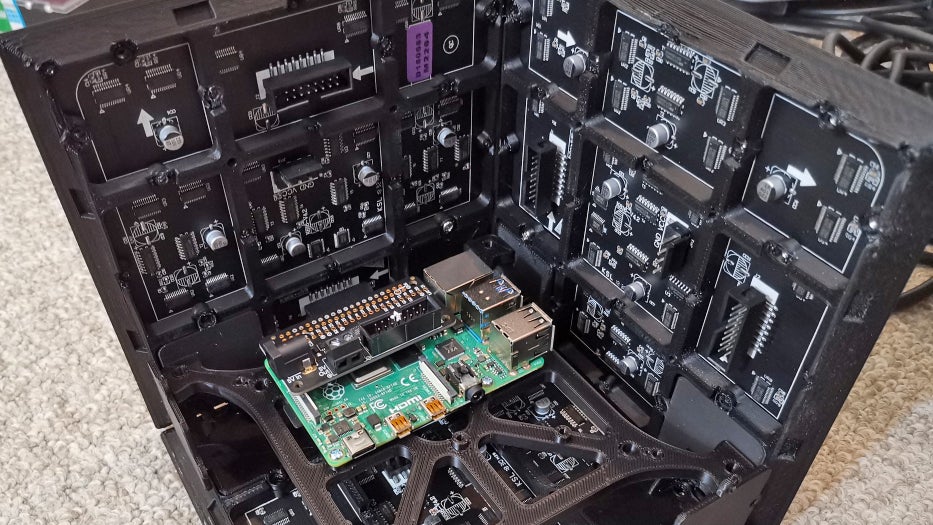 To make up for the limited resolution, Stewart set out to come up with a way to display a game across four of these screens at once, similar to how the giant screens in sports stadiums are created. He started by designing and 3D printing a custom structure that turned four of these displays into a cube, which was then placed atop a powered spinning lazy susan whose speed could be manually controlled using a set of foot pedals, leaving a player’s hands available for using a gamepad.

Believe it or not, the complex hardware wasn’t the most challenging part of this hack. You might not realise it, but while playing a classic side-scrolling 2D adventure game like Super Mario Bros. or, in this case, Castlevania, your character remains locked to the centre of the screen while the backgrounds and other characters scroll past. That wasn’t the effect Stewart was after, he wanted the player’s character to appear as if it was walking all the way around the cube, from screen to screen, as it progressed through the game.

To de-scroll the NES version of Castlevania, Stewart modified a Javascript-based NES emulator so that he could calculate our hero Simon Belmont’s position in the level, and then offset what part of the level the emulator was actively displaying on each screen. That makes it sound a lot easier than the modifications were, but Stewart has shared a handful of gameplay demos to his Twitter account that show off exactly how the hacked emulator now works.

Eventually, Stewart hopes to automate the spinning cube so that it tracks the character’s position in the level, removing the need for the player to manually control its speed. But if they take out the spinning altogether, they might have actually created the next fitness craze, requiring players to chase their character around the cube in order to see what perils lie ahead.