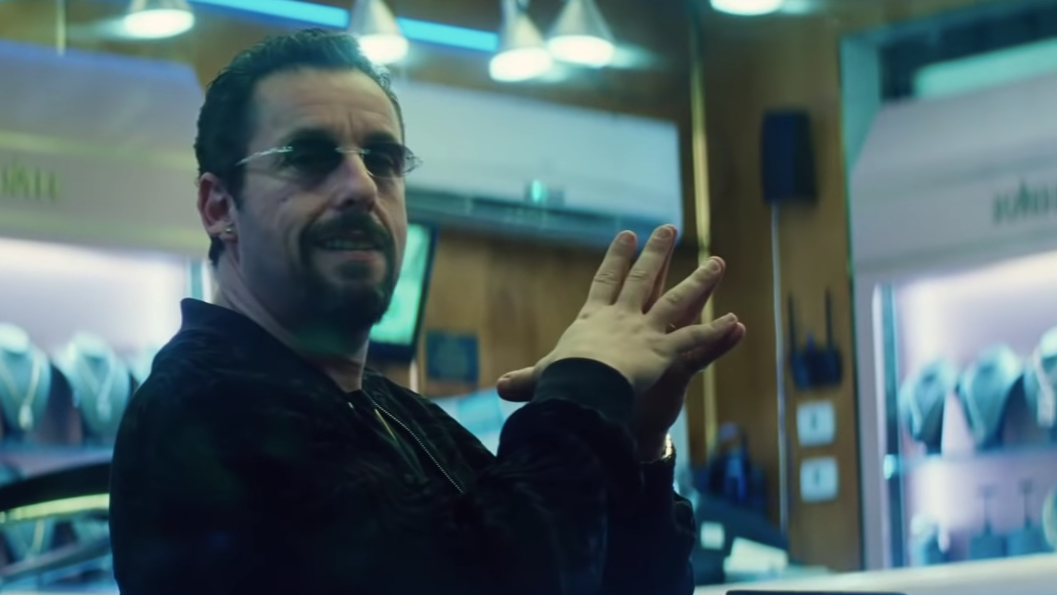 The experience of watching Uncut Gems left me feeling like I was teetering on the edge of a cliff, not knowing when I would fall. I cannot recommend this movie highly enough. Yes, I’m talking about the Uncut Gems with Adam Sandler in it.

There’s an artist I like named Bruce Nauman who has an interesting video installation called “Clown Torture.” It was on view at the Art Institute of Chicago while I was working as a cashier in their cafe. It’s siloed off to the side, the entrance shrouded in darkness, but walking past, I could always hear it. From outside, all you can hear is screaming.

Once inside, “Clown Torture” is installed on at least a dozen monitors, playing out of sync with each other. It’s a video of a man dressed as a clown alternately laughing and crying. It’s played extremely loudly. Standing in that room feels like being assaulted. I only went inside once, joined by a curator who told me that every year he likes to see how long he can stand to be in the installation. The longest he made it was 20 minutes.

There are moments of Uncut Gems that feel exactly as anxious-making as “Clown Torture,” and I mean that as a compliment. This movie is a character study of Howard Ratner, played by Adam Sandler, who sells jewellery to rappers and sports stars in New York’s diamond district. Ratner’s main problems are self-inflicted. He simply cannot stop scamming people. Throughout the entire movie, he is beset by calls from people who say he owes them money. They show up in his shop, they follow him to his home, they beat him and steal things from him to try to make small dents in his debts.

We see Ratner’s modus first hand in Uncut Gems. First, he buys an uncut black opal that he believes is worth at least a million dollars, and plans to auction it off. He ends up showing it to Kevin Garnett, the actual real basketball player Kevin Garnett, to impress him. Garnett gets obsessed with it, believes that the black opal will improve his basketball, and tried to buy it off Ratner on the spot. Ratner refuses but ends up agreeing to let him hold on to it for a couple days. As insurance, Garnett gives Ratner his Celtics championship ring to hold on to while he was the opal. After that exchange is over, Ratner immediately takes the ring and gives it to a pawn shop so he can use the cash he got for pawning it to place a completely ridiculous bet on Garnett that night.

The scenes that are most chaotic are when everyone needs something from Ratner simultaneously. Ratner has one volume for speaking: yelling. In his jewellery shop, clients have to buzz in, and then are loudly buzzed in return. The cacophony that occurs in that tiny shop is almost unbearable. It’s “Clown Torture.” It’s just constant—the buzzing, the yelling, the often physical fighting. There’s one scene where the buzzer on the door stops working, so while three different people are trying to get three different things from Ratner, he’s troubleshooting the door, the buzzer going off every millisecond. The kind of person who can live, let along thrive, in that sea of anxiety is a stronger one than I.

By the end of Uncut Gems, I felt out of breath. I’m not sure if I liked or was rooting for Ratner by the end. He has alienated everyone in his life in pursuit of incredibly selfish goals, but Sandler plays him with a real human vulnerability, absolutely disappearing into Ratner’s dysfunctions and his humanity. Ratner is always after the next big score. The desire to make it big has completely consumed Ratner as a person, is eating him up from the inside, but I don’t know if he’s wrong. Doesn’t everyone want to hit the jackpot?