Before GoldenEye On N64, There Was This GoldenEye Game

GoldenEye for the N64 is a bona fide classic. The game was groundbreaking, one of the first truly good first-person shooters on a console and its multiplayer mode is still beloved to this day. But, two years before this classic game was released, another version video game version of GoldenEye was released. It wasn’t as good as Rare’s N64 classic but is interesting in its own ways.

When bits of this art are activated, they create the illusion of animation and movement. Nintendo released similar games back in the day and Kingdom Hearts 3 includes some mini-games that are inspired by these small handheld games.

These are, supposedly, somewhat rare devices. In the video about you can see the person playing this game is wearing gloves to, presumably, protect the device from being damaged.

Two devices were released. One, seen above in the video featuring the gloves, is held like a traditional controller and features Bond running to the right. Players have to dodge enemies and eventually drive a tank, like in the film, to defeat the bad guys and save the world. The background on these handheld LCD games don’t change, so for some reason, all of this is happening on a single dirt road. The 90s were wonderful.

Speaking of the 90s, look at that device and the colours. I love how brightly coloured the buttons and controls look and I really love how Bond is just staring at you the whole time. No pressure, he’s just watching you closely and judging everything you do.

A second handheld LCD game based on GoldenEye was released around the same time. This one seems to be even rarer or at least there is less information about it online. This version of the game is known as the “Grip Games” variant or the grip version. It was shaped more like the handle of a pistol than a controller. It also featured a different game. This time Bond was running upwards and firing at bad guys with his pistol. Eventually, you reach the end and have to shoot down the GoldenEye satellite. 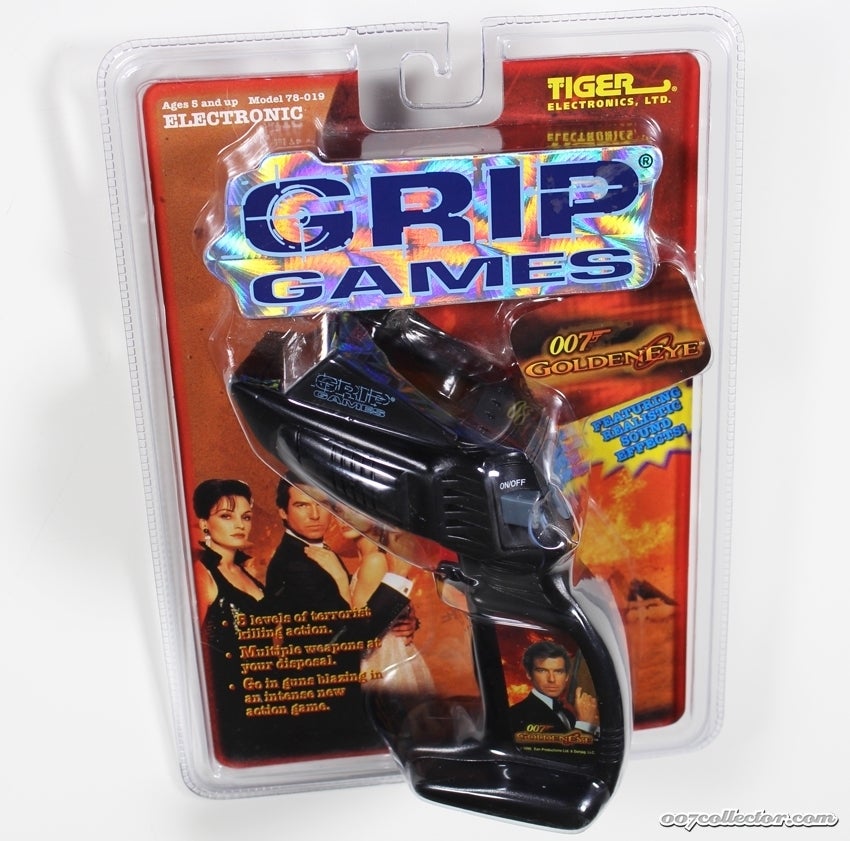 The manual for this version of the game has been uploaded to the internet if you are curious about how to play this LCD game from the 90s. If you instead want to play one of these games, you can try to track one down via eBay or you can visit the Internet Archive, where someone has kindly uploaded an emulated version of the game. It doesn’t have the background art and I had issues getting it to start, but it’s free and doesn’t involve shipping a 90s handheld to your home.

Of course, two years after these LCD games were released the world received the N64 GoldenEye game which was better in basically every way. But it didn’t have Bond staring at you the whole time as you played. So was it really the better game?