Moxxi’s Heist of the Handsome Jackpot, the first of four major DLC expansions planned for Borderlands 3, is an odd duck with regard to the way it’s made me reconsider the game’s main campaign. While I very much enjoyed Borderlands 3 and believe this is a fun and necessary continuation of its looter-shooter adventure, the main villains and conflicts consistently felt like cheap detours compared to Handsome Jack. This opinion was only strengthened by the DLC’s inclusion of a pseudo-return of the previous instalment’s corporate douchebag.

The narrative of Moxxi’s Heist revolves around the titular Handsome Jackpot, a floating space casino built by Handsome Jack sometime between his ascent to power and violent death in Borderlands 2. Mad Moxxi, the franchise’s ever-present and lustful clown bartender—the phrase “clown bartender” makes slightly more sense in context of the Borderlands universe—is planning to rob the place now that Jack is dead, and so she enlists the Vault Hunters of Borderlands 3 to assist in her heist. What follows is a madcap and vaguely Las Vegas-themed romp through the spacefaring casino, full of the same hit-or-miss humour for which the Borderlands series has come to be known.

Although Handsome Jack is dead and a new villain has taken his place at the top of the casino’s hierarchy, his presence throughout Moxxi’s Heist is constant and undeniable. Various audio and video recordings still dispense his sneering rants about money and status, golden statues line every hall and avenue, and a giant hologram projection of his masked face looms over the entire complex. This is a welcome return to form for someone like me who spent an ungodly amount of time with Borderlands 2 while waiting for the third instalment, and I relished each new bit of negging from Handsome Jack during my time with Moxxi’s Heist.

That said, Handsome Jack’s proximity to the action also serves to highlight just how weak Borderlands 3 was in the antagonist department. Borderlands is at its best when the villain is capitalist greed rather than a pair of livestreaming weirdos, making even this brief taste of Handsome Jack enough to overshadow any emotion the Calypso twins managed to evoke in me during the main campaign. The popularity of broadcasting to the world on platforms like Twitch and YouTube has definitely helped way too many narcissists embed themselves in the zeitgeist, but until PewDiePie or Ninja build a literal cult on that foundation, the big bad in real life will always be capitalism’s need to commodify every aspect of our lives. That was a cultural critique that Borderlands 3 largely put on the backburner, at least until the release of Moxxi’s Heist. 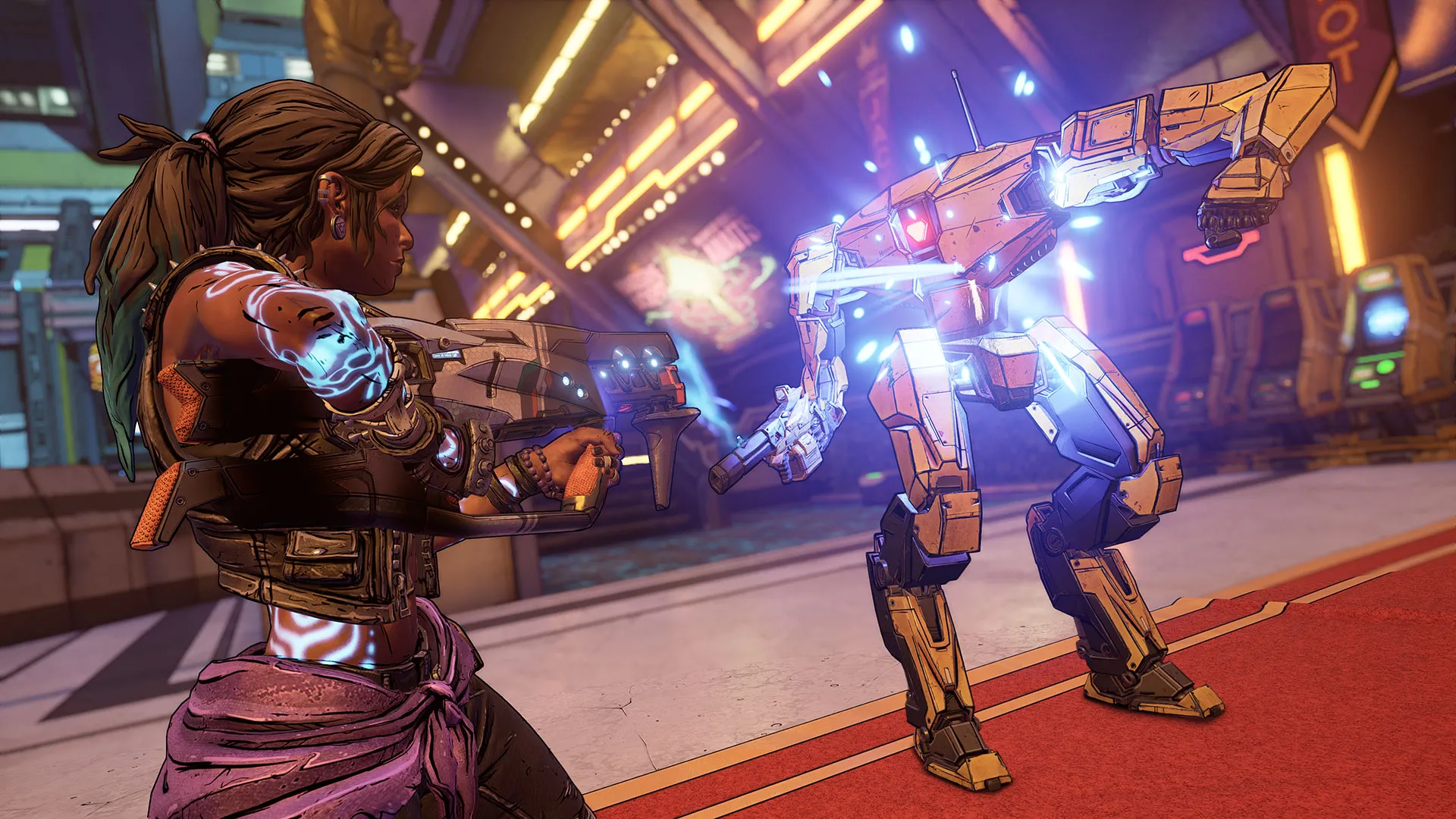 Upon arriving at the Handsome Jackpot, the Vault Hunters learn that the space station is now less of a casino and more of a prison. Handsome Jack’s death sent the facility into lockdown, trapping visitors within its confines for the last seven years. Of course, that didn’t put an end to the gambling under the casino’s new de facto leader Pretty Boy, and folks have continued to accumulate debt as they hunt for the next big payout, the most unfortunate of which have their names emblazoned on a digital “loserboard” that proclaims to the world how much they owe the house. While it doesn’t drive the point home as hard as it could, Moxxi’s Heist is a fascinating look at parts of the Borderlands universe that actually got worse once Handsome Jack bit the bullet.

Take, for example, Timothy Lawrence. Previously a playable character in Borderlands: The Pre-Sequel, the Handsome Jack body double returns in Moxxi’s Heist desperate to escape from the Handsome Jackpot, both because being locked up in a casino for seven years sucks, and also because his physical resemblance to the most ruthless arsehole the galaxy has ever seen has made him a target for the disgruntled masses that said arsehole screwed over. The normally friendly Timothy is also prone to egotistical outbursts, a side effect of gene-splicing with Handsome Jack’s DNA that’s particularly distressing for the character as he attempts to distance himself from his past. In the finale, Timothy is forced to cut off his own hand—a cybernetic implant that allows him to access various facilities around the space station—literally separating one of the last few pieces of Handsome Jack’s legacy embedded in his own body. It’s incredibly on-the-nose in a way I’ve come to expect from the Borderlands franchise but still manages to provide a bit of surface-level thoughtfulness between the dick jokes.

Overall, Moxxi’s Heist is an enjoyable addition to Borderlands 3. While it doesn’t introduce any major gameplay changes, the set pieces, storylines, and characters are so fantastic that they make the main campaign look a little dull in comparison. I was initially hesitant to jump back into the game after spending a decent amount of time away from it, but I found myself almost immediately engrossed by the narrative, thanks to the return of sorts by Handsome Jack. He may not be the true antagonist of Moxxi’s Heist, but Handsome Jack’s legacy of corporate corruption and capitalist greed has left an enduring mark on the world of Borderlands. My only hope is that this is just the beginning of the franchise’s efforts to refocus its ire on the plutocrats who have ruined its universe and not whatever weird thing the kids happen to be doing in the real world.