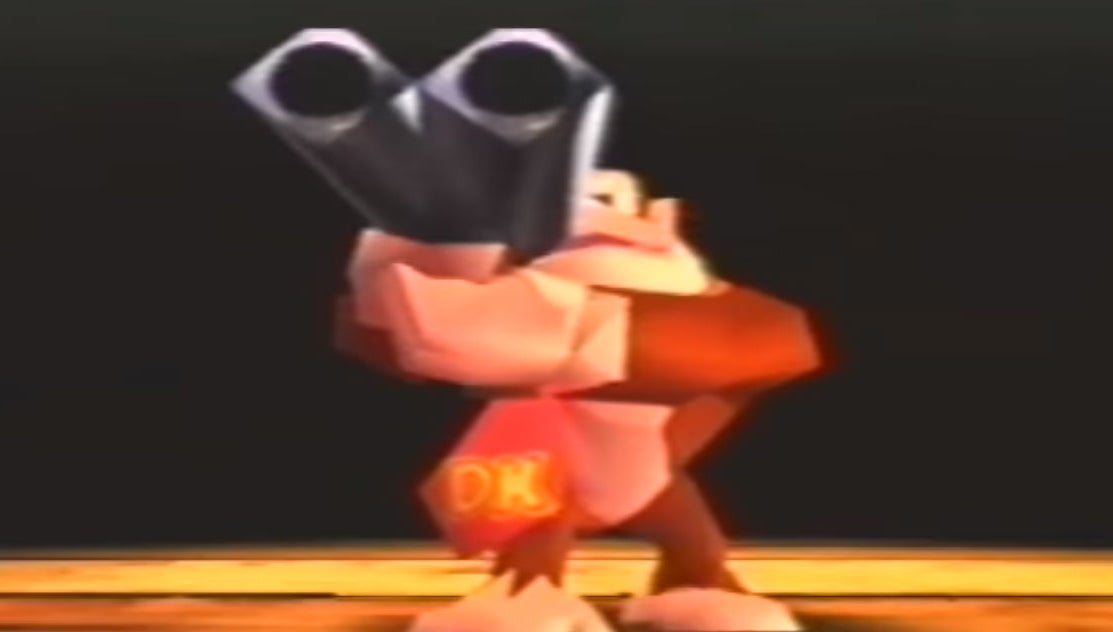 Donkey Kong with his trusty shotgun (Image: <a href="https://www.youtube.com/watch?v=wur1OxnYUzo">Snides</a>)
To sign up for our daily newsletter covering the latest news, features and reviews, head HERE. For a running feed of all our stories, follow us on Twitter HERE. Or you can bookmark the Kotaku Australia homepage to visit whenever you need a news fix.

Donkey Kong 64 stood out from the rest of the banana-obsessed Donkey Kong bunch. The DK Rap is, of course, its most memorable and meme-able element, but we cannot—and indeed, should not—understate the fact that Donkey Kong also had a freaking gun. The coconut gun could fire in spurts, and if it shot you, it would hurt. Once upon a time, though, there were no coconuts. It was just a gun.

In a Donkey Kong 64 retrospective on GamesRadar, creative director George Andreas reflected on the coconut gun’s origins. The game was in development at British studio Rare, but original Donkey Kong creator Shigeru Miyamoto had stopped by to check in on progress. By that point, the game had plenty of standard Donkey Kong activities in place: You could swing on vines, collect bananas, and all that Funky Kong jazz. But also, there was a gun.

“It wasn’t a textured gun that you might expect but a realistic shotgun with bullets flying out and with horrifying sound effects,” Andreas told GamesRadar. “You get so used to things being in development, even if it is a placeholder, and I completely forgot that it was in there. I’m shooting beavers, turned to my side, and see this look of horror on Miyamoto’s face!”

Upon seeing this, Miyamoto did not emit an outraged shriek and call for the game to be cancelled immediately. Instead, he began to draw on a piece of paper. In that moment, he produced the coconut gun. “It had leaves on it, and he handed it to me,” said Andreas. “I looked at it and said ‘Oh yeah, that’s cool, we’ll put that in,’ and the coconut gun was put in after that.”

While game development was not as well documented back then as it is now, some footage of gun made its way online, firing coconuts in one case and regular ammo in another. Regardless, it’s jarring to watch beloved children’s video game character and hip hop luminary Donkey Kong murder cartoon rats with a realistic gun. I’m beginning to think Miyamoto might have been onto something.

The full GamesRadar piece is worth a read, especially the section about the DK Rap and how it was intended to be a joke but was definitely not received as one at the time. Now, it’s a beloved meme, so I guess the scrappy underdog, successful and beloved video game composer Grant Kirkhope, won out in the end.