Every Final Fantasy game has had special meaning to me, even the more controversial ones like X-2 and XIII. While they have their flaws, their incredible production values and Square Enix’s desire to innovate on the series makes every iteration feel like a brand new experience. As much as I wanted to, I didn’t get to FFXV right away, because life got in the way. That might have been a fortunate thing, from what fellow gamers have told me, as there were lots of fixes and updates that made the experience all the better. When I finally did play, my reaction was mixed. There was a lot I loved, but a lot I felt confused by as well. Then the ending changed everything. 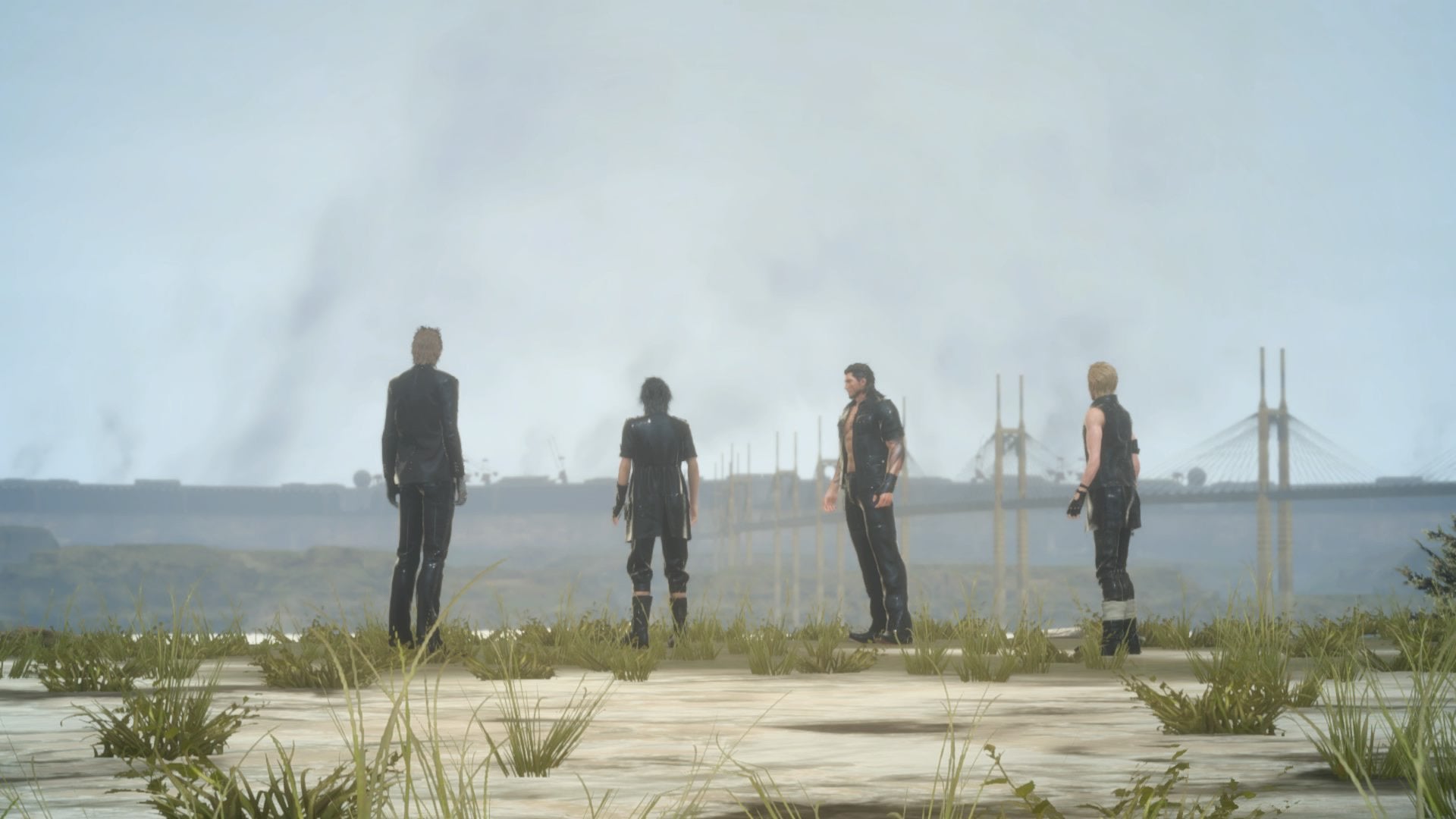 Before I started Final Fantasy XV, I watched the tie-in movie Kingsglaive as I’d heard it was indispensable to understanding the game’s backstory. I didn’t mind that so much, as the CG is beautiful. What I didn’t know was how much more external media I would have to watch and play to know what was going on. This included an anime called Brotherhood, DLC for the game, and a beat-em-up game in the FFXV universe. Because I missed them, the first time through, I actually didn’t fully understand the story for big chunks of the main game.

The opening, four friends pushing a stalled car, felt abrupt. What was their relationship? How did they get so close? Every Final Fantasy game I’d played until then consisted of a party of people meeting each other for the first time, then embarking on a journey together as they learned new things about each other. They don’t always get along, but that’s also part of what makes their story arcs so gripping. This was different, and different isn’t necessarily bad. But I was frustrated to learn that these questions are answered not in the game but in the anime, which I’d missed. 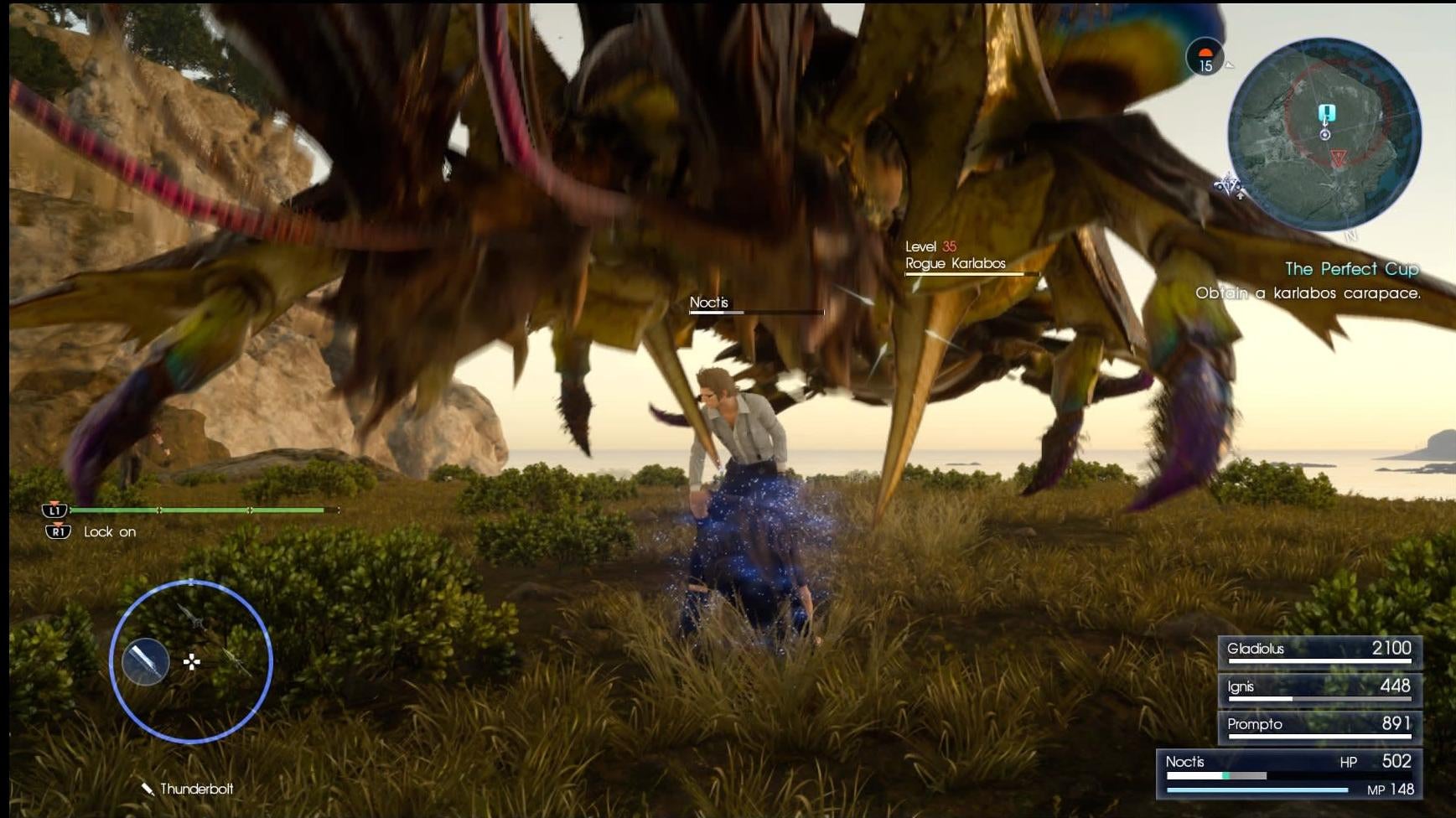 Fortunately, I got sucked into the gameplay. FFXV has some of the best combat in the series. It is fun, addictive, and action packed. Any qualms or questions I had about what was actually going on was lost in the frenetic battles. Any lack of relational development between the four friends was made up for in their cooperative battles and friendly banter. While sidequests felt like a mix of repetitive fetch quests and monster hunts, it was ok as long as I could listen to retro FF music in the car on the way there. 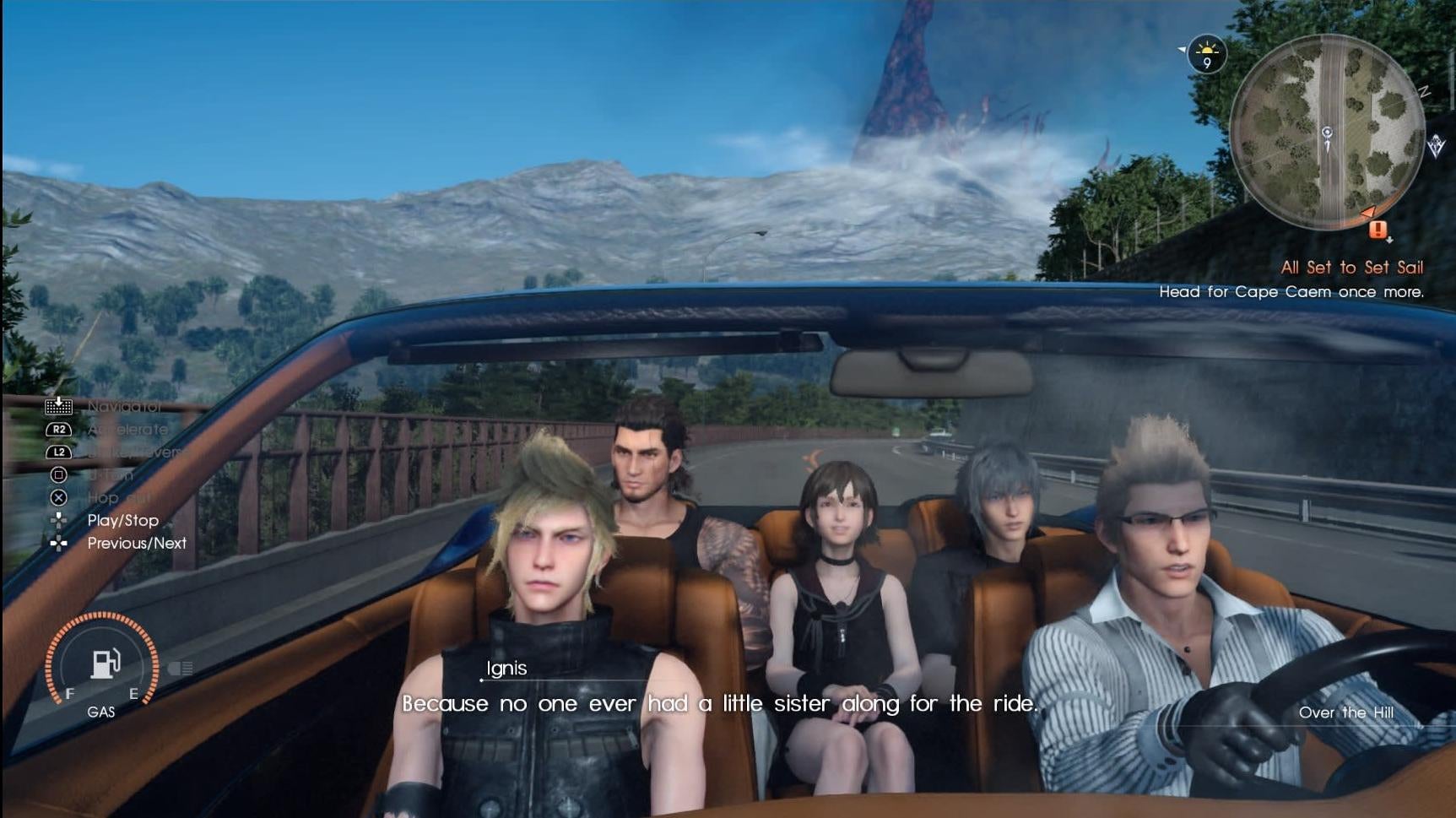 FFXV gives us a world under constant siege, and yet its best parts are when you can chill, relax, explore the world, and hang out with your buddies. I love all the different kinds of food you can cook, although thanks to the huge XP boosts you can get by staying at hotels, my campfire outings were limited. The gorgeous visuals, fun gameplay, and familiar music made me nostalgic. You don’t really need to progress the story unless you want to, and even then, until the chapter where the party leaves for Lestallum, you can just enjoy the open world.

It’s when the story starts to take focus that I started losing interest, which is a strange feeling to have in a Final Fantasy game, since I usually play them for the stories. 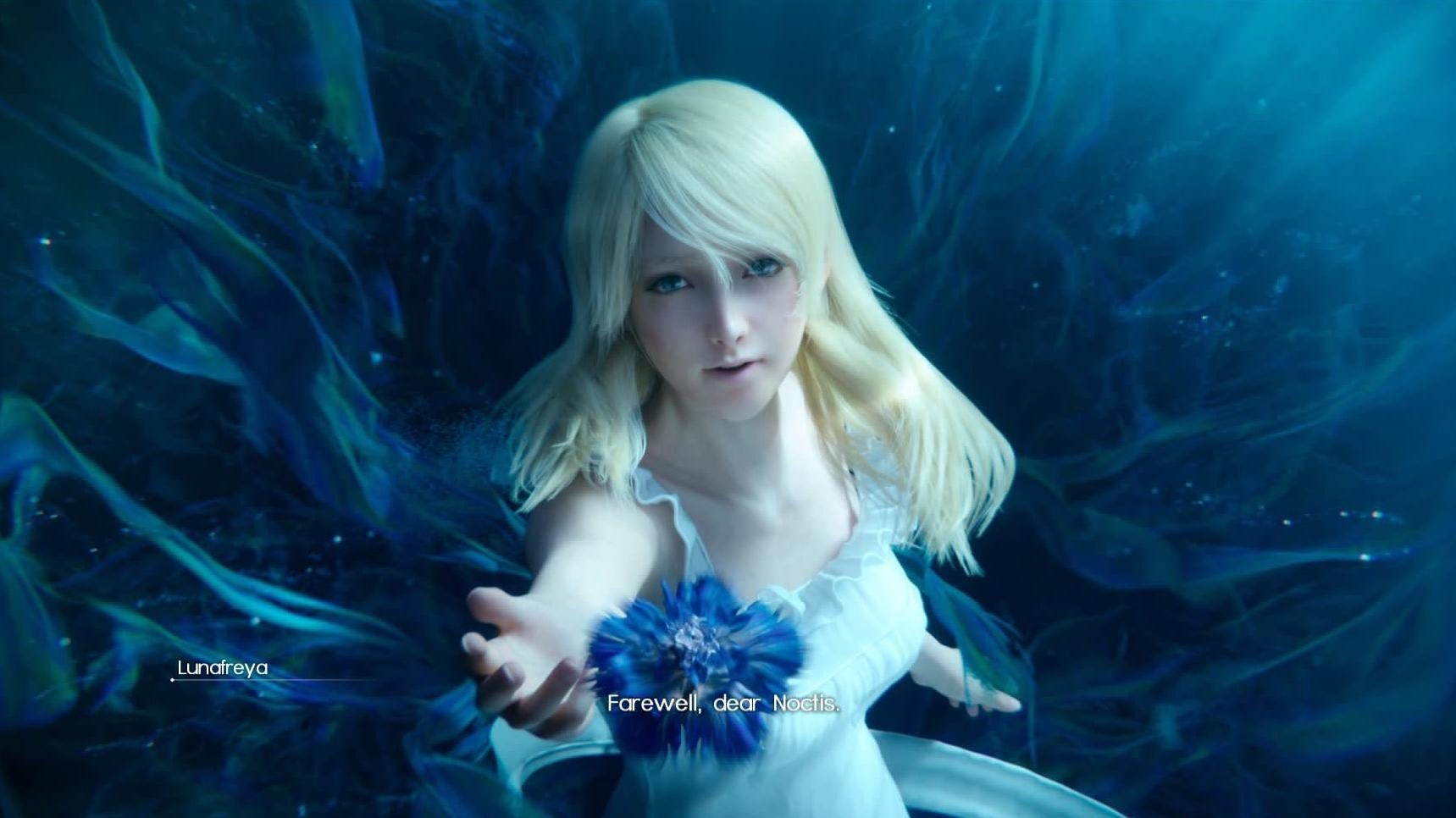 Once your party gets to Lestallum, there is an epic fight against the Leviathan that I really enjoyed. But the climax of that battle confused me as I actually misunderstood the part where Ardyn kills Noctis’s fianceé Lunafreya. The knife Ardyn uses is so small that I assumed a Phoenix Down or Cure spell would patch up her wounds. (I just played FFVIII, where an ice lance impales Squall and he shrugs it off in the very next scene.) Lunafreya also talks for a while after her knife wound, and seems to be mostly ok. If anything, Noctis appears to be in worse condition than her. Then they have a flashback slash dream together and I actually thought, oh cool, she’s going to finally join the party. Or not, based on the way she’s talking to me?

After waking up, Ignis tells Noctis, “She has passed,” which completely caught me off guard. Rather than feeling sorrow, I felt like I’d missed something. The emotional beat hadn’t landed. After finishing the game, I did read theories that Lunafreya’s summon was the thing that actually killed her since it drained so much energy from her. But then, why did Ardyn even bother with the knife?

On top of that, I didn’t even realise Ignis had lost his eyesight until some of his dialogue implied as much. I couldn’t believe that they wouldn’t show such an important event for a main character and I later learned it was in the DLC for Ignis. I don’t mind paying more for a DLC—well, maybe I mind it a little—but I wish I could have known that beforehand. 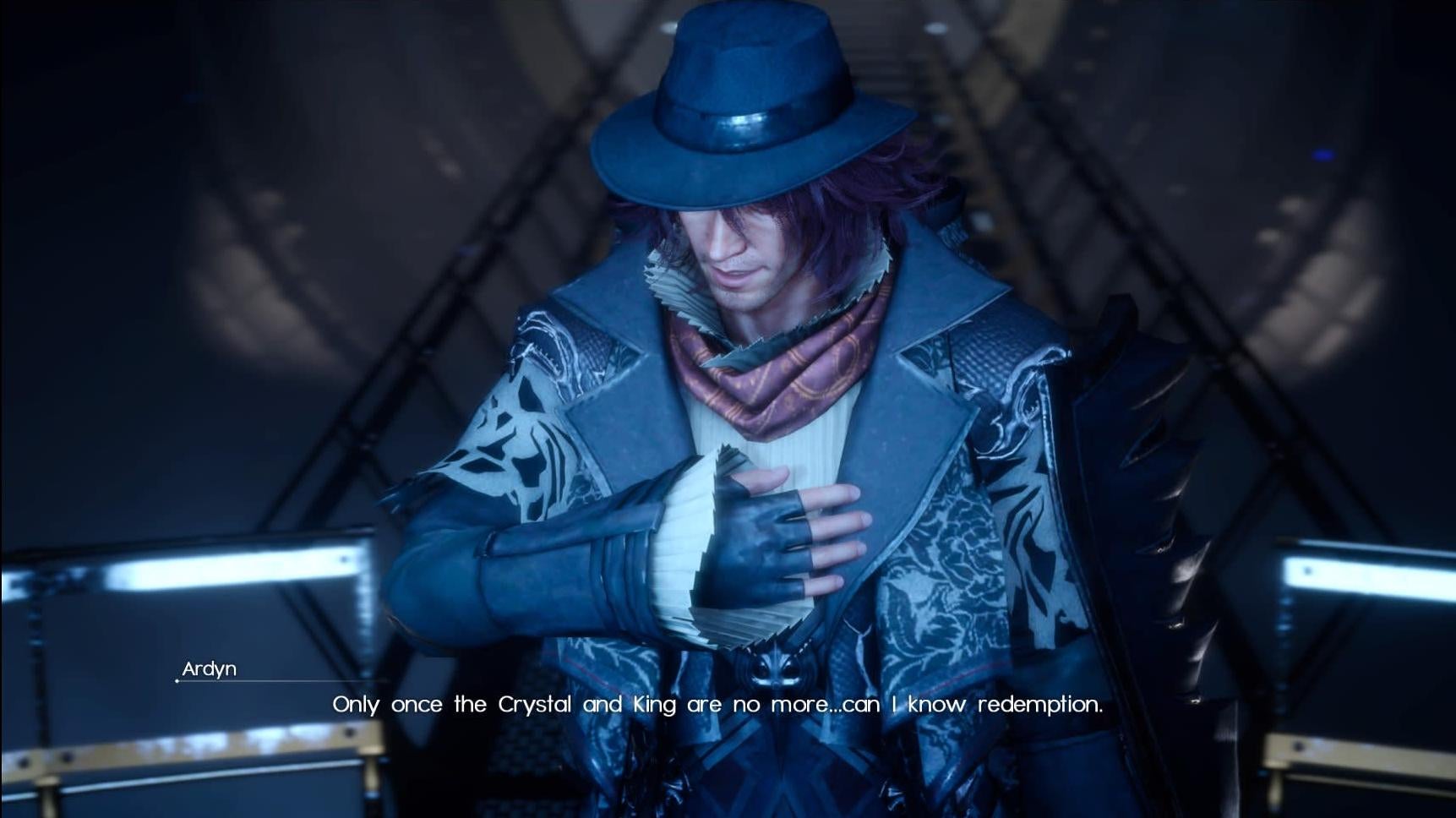 From there, Ardyn plays his role as the archvillain and he has a tragic backstory that, once again, gets filled out in the DLC. Ardyn has been alive two thousand years and has been badly wronged by the gods. He was supposed to be the True King and had fought off a terrible epidemic known as the Starscourge by absorbing the disease from those who were infected. His gifts as a healer gave him renown and he believed it to be granted to him by the Astrals, which are kind of like their gods.

But then the Starscourge, begins to take control of his body and mind, becoming a curse. Through a series of betrayals by his brother, he loses his power, the Astrals’ blessings, and the woman he loves. He’s locked away for thousands of years, with his brother erasing his record from the history books. Niflheim released him so they could exploit his powers. Even then, he didn’t want to get involved, but use of the demonic powers warped his mind. Now, all he seeks is revenge on his brother’s family line, which is represented through Prince Noctis, since Ardyn succeeds in killing his father. 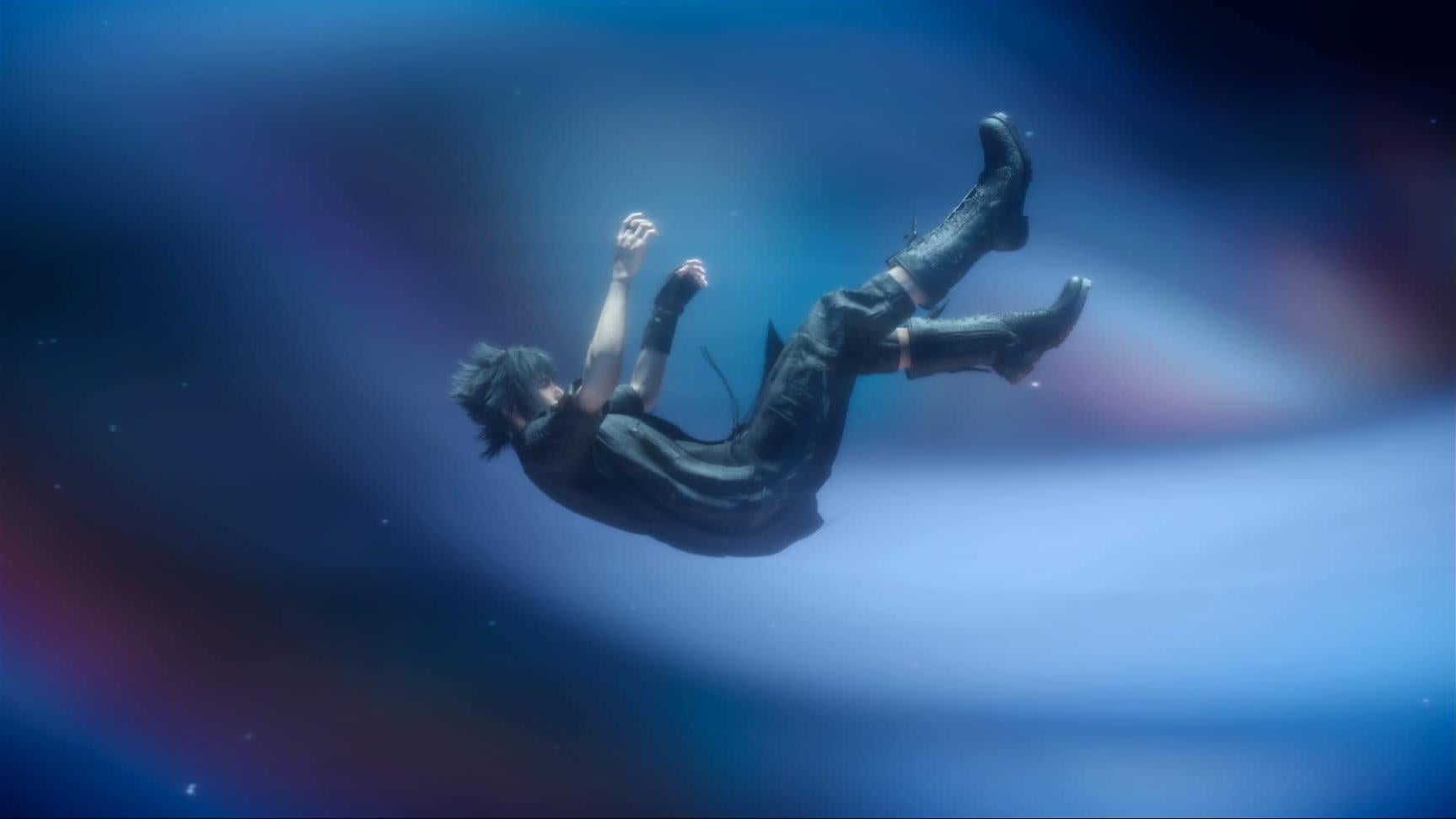 Noctis proceeds to face his destiny and meet the Astral Bahamut. Bahamut tells Noctis he must sacrifice his life to end the Starscourge once and for all. “Many sacrificed all for the King; so must the King sacrifice himself for all,” the Astral Bahamut states, then sucks him inside the crystal for ten years. During that decade, Ardyn becomes so consumed by the Starscourge that he mutates people into monsters and plunges the world into an eternal night. In a tribute to Final Fantasy VI, this ravaged future of Eos is called the World of Ruin.

Noctis emerges from the crystal a decade older. I was actually pretty excited about the World of Ruin. Everyone’s aged. Everyone’s been doing their best to survive. These scenes could have had so much gravitas. As they go to Insomnia to face off against Ardyn, I loved this edgier atmosphere. I actually wish there was more to this part of the game, kind of like the second half of Final Fantasy VI. 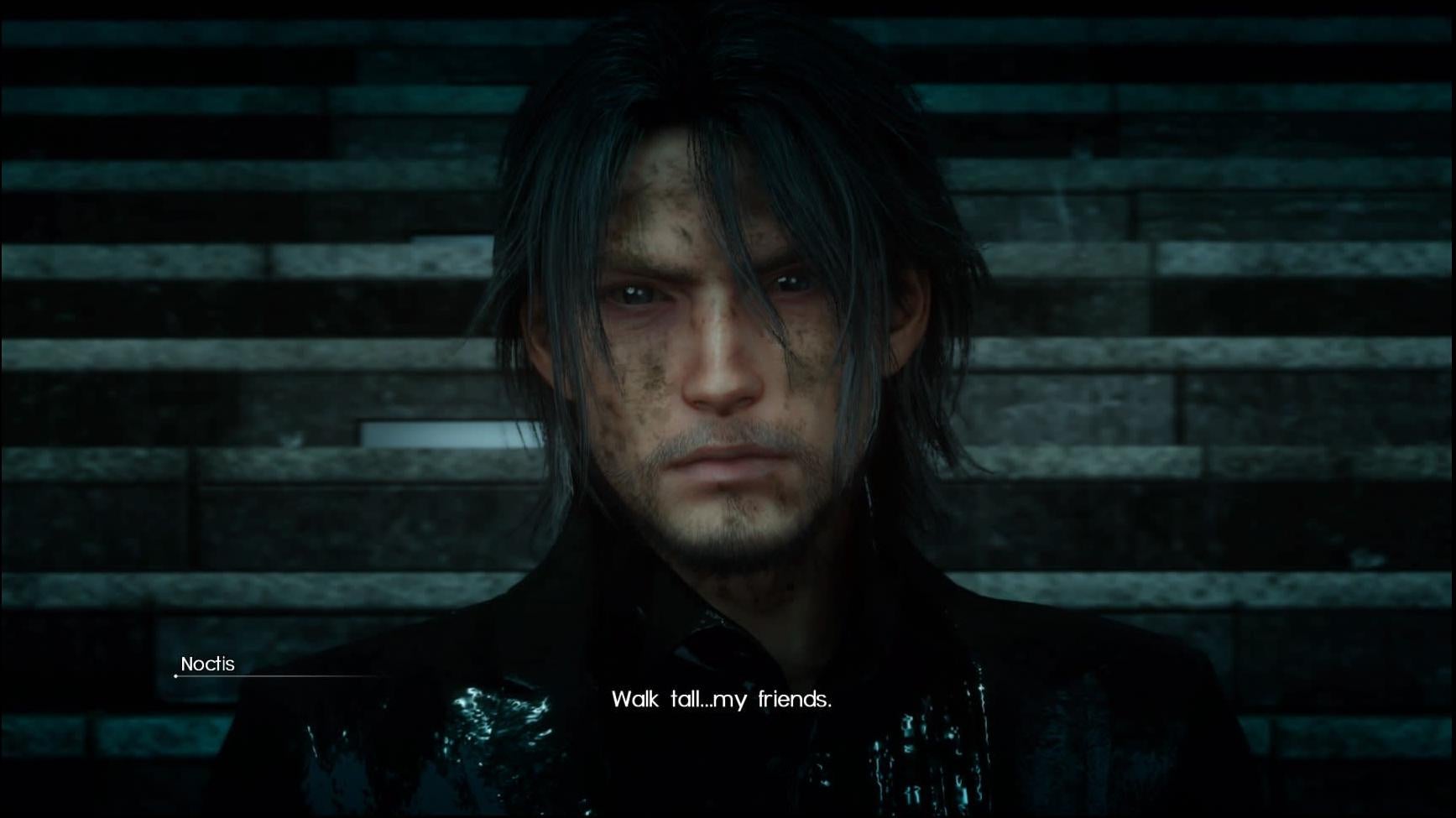 The four of you raid the citadel and eventually break through to the main fortress. Right before Noctis has to face Ardyn, he says goodbye to his companions. It’s a touching farewell, but honestly, I thought I was going to see them all after I kicked Ardyn’s arse.

Unfortunately, Noctis’s fate was sealed the moment he was born. After defeating Ardyn, Noctis uses the power of the crystal and the Ring of the Lucii as he sits on the throne. “I love you all. Luna, guys… Dad… The time we had together, I cherish,” he says. Then he calls the Kings of Lucis and orders them to come to him. They each take turns stabbing him with the last blow coming from the spirit of his father. In the afterlife, he purges Ardyn once and for all. The last image of the game is Noctis and Luna getting married as spirits. They’re dead. The End. 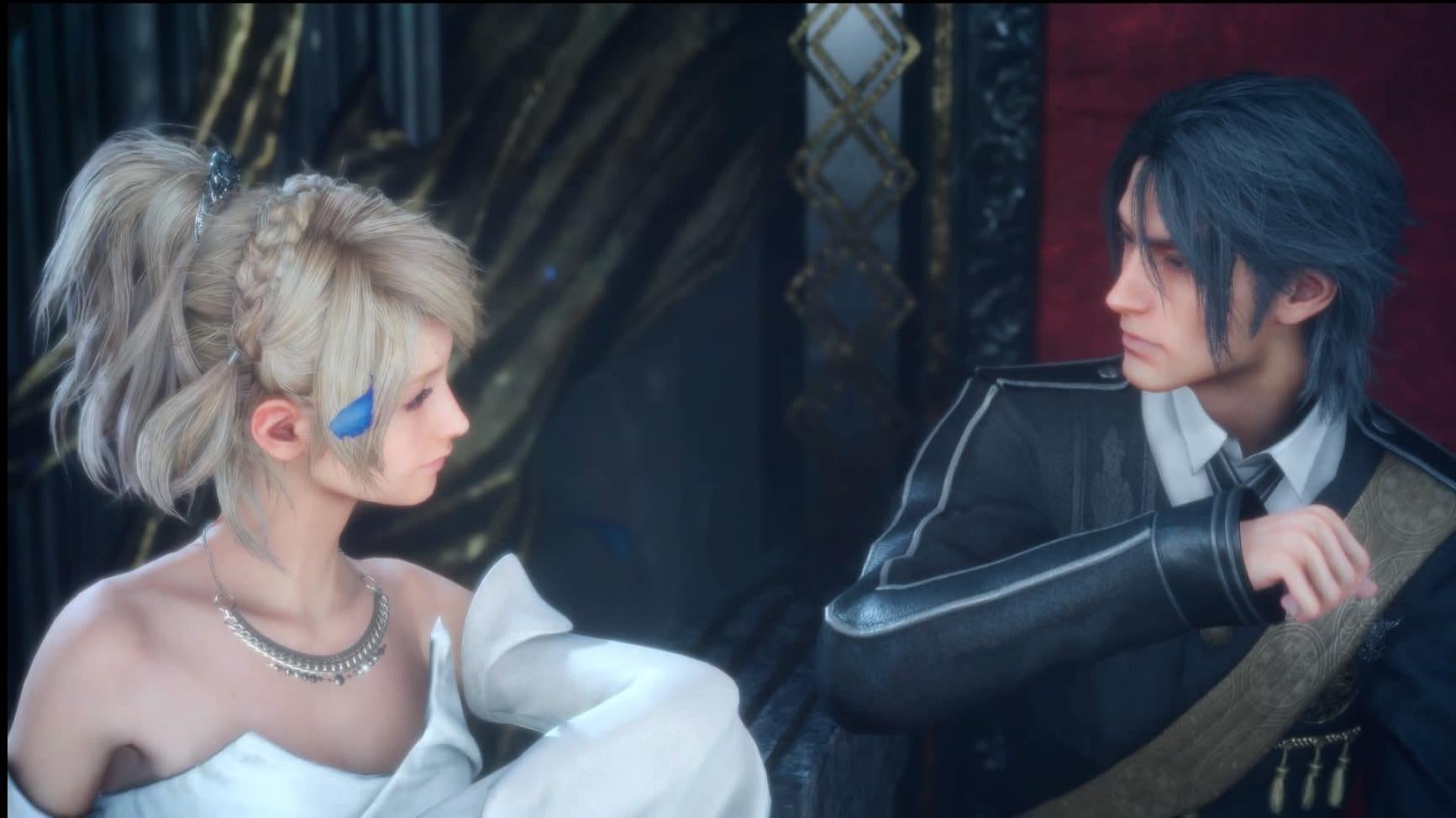 This time, I was shocked.

It felt like the entirety of the game had been recontextualised.

Final Fantasy XV isn’t so much about brotherhood as it is a young man who has to come to terms with a dark fate. His entire journey is preparation for him to make the ultimate sacrifice. This isn’t a story about escape, bringing salvation for everyone, and then riding away in the sunset. This is about a kid growing up and spending what little time he has to try to appreciate life. 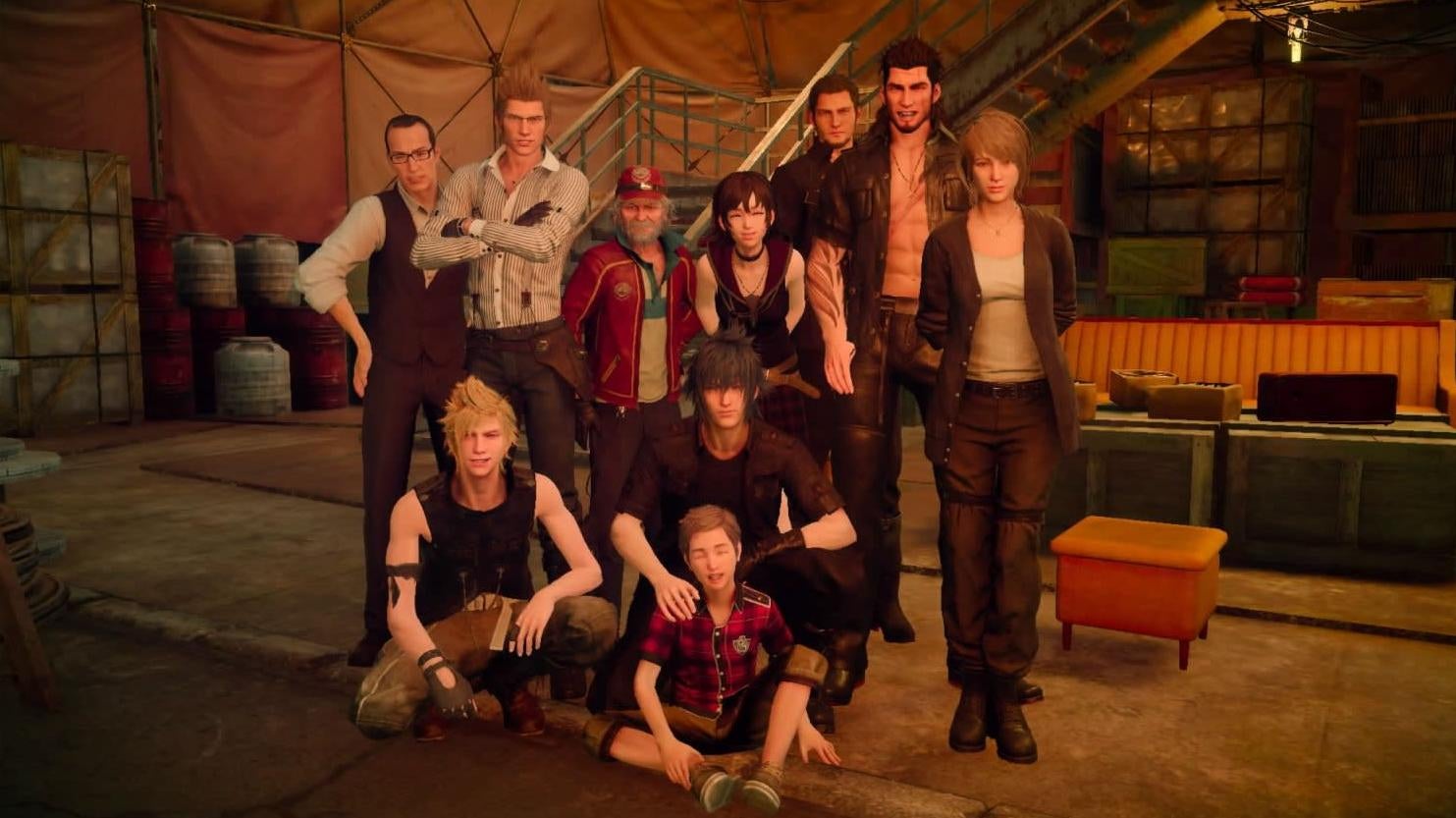 The casual air, nonchalance, and playful friendships couldn’t have been possible if Noctis knew he was going to die. The story moves along at the pace you want it to, since it’s all about getting Noctis ready to take on the mantle of the True King. But what makes Noctis a great leader isn’t that he wields his power and authority with an iron fist. It’s that he’s willing to sacrifice himself for the greater good. A True King cares mainly about how he can serve his kingdom, a lesson he learns from his friends and Lunafreya. The revelation from Bahamut that he has to die is cruel, just as cruel as what Ardyn faced all those millennia ago. It’s so cruel that we have to question what sort of beings the Astrals even are. But his father knew what his son would have to do, as did Lunafreya. This was the first Final Fantasy that’s about accepting your fate, rather than defying it. And in that acceptance, everyone finds their peace. 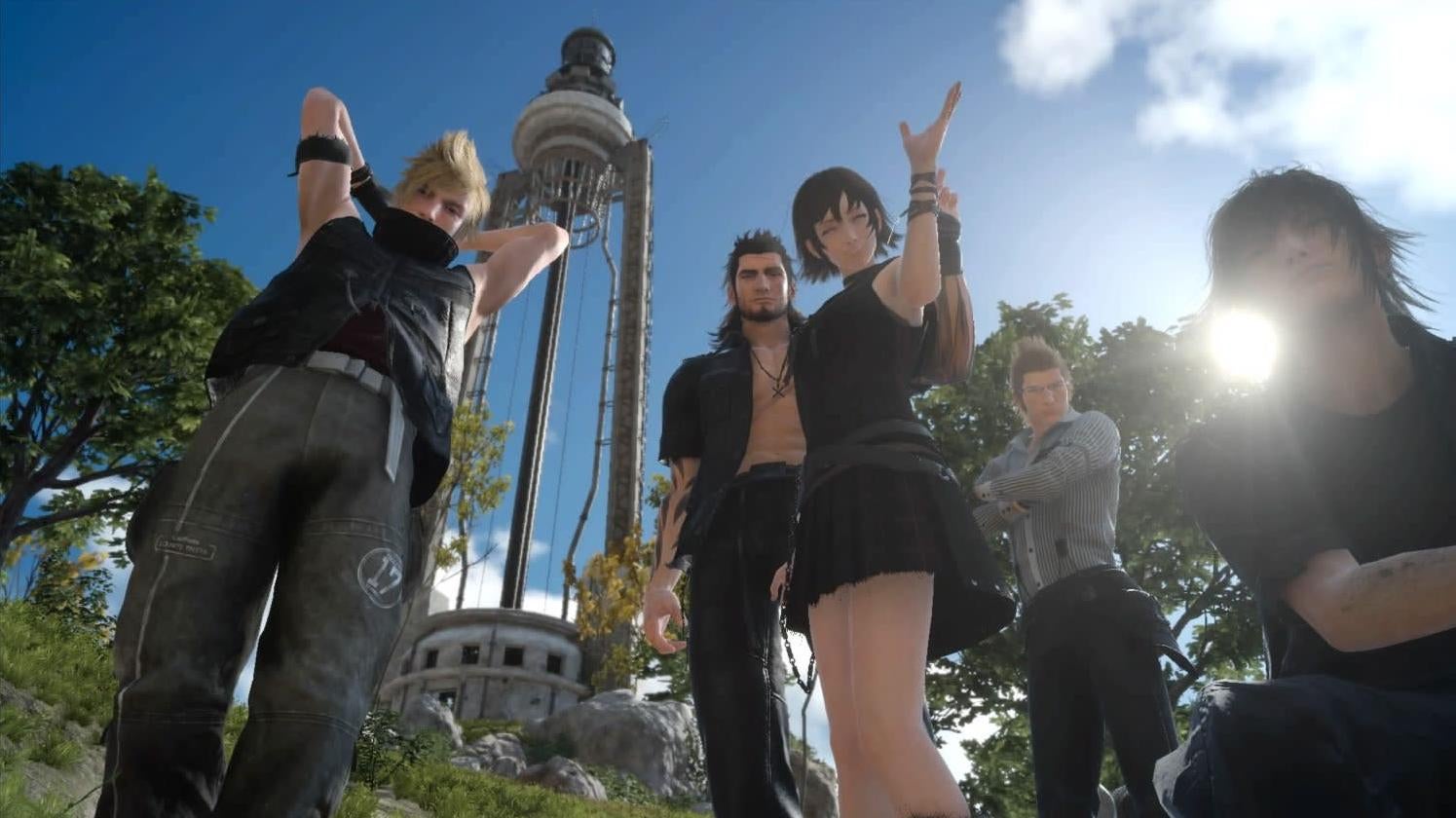 The entire game felt different, looking back. Those moments trying to hunt rare beasts, take random photos for people, and goof off in Eos with your friends suddenly became a metaphor for all our lives. Facing death, his entire youth was distilled into a single photo of the player’s choice. Like Noctis, it’s easy to let time slide by so you wake up one day and suddenly wonder: What happened to the last ten years of my life? Existence is abrupt, full of breaks that lack continuity. Friends go off on their own personal journeys and unless you take the time to invest in finding out what they did, many times, you’ll have no idea what they’ve been through. Whether it’s destiny, fate, fortune, or whatever else you might call it, the cards just don’t go your way. Ardyn became twisted by the vicissitudes of his life, which were terrible despite his noble intentions. Noctis accepted his misfortunes, finding strength in the memory of those he loved. His heroism isn’t an active one, but a passive choice.

I wouldn’t have minded if Noctis gave a big middle finger to the Astrals and found his own way of dealing with Ardyn. It’s also still possible there could be a sequel to FFXV where his companions rescue Noctis and Lunafreya from the afterlife, even though they don’t look like they want to be rescued. But it’s in the stark results of the game that we are reminded that this fantasy really was final.