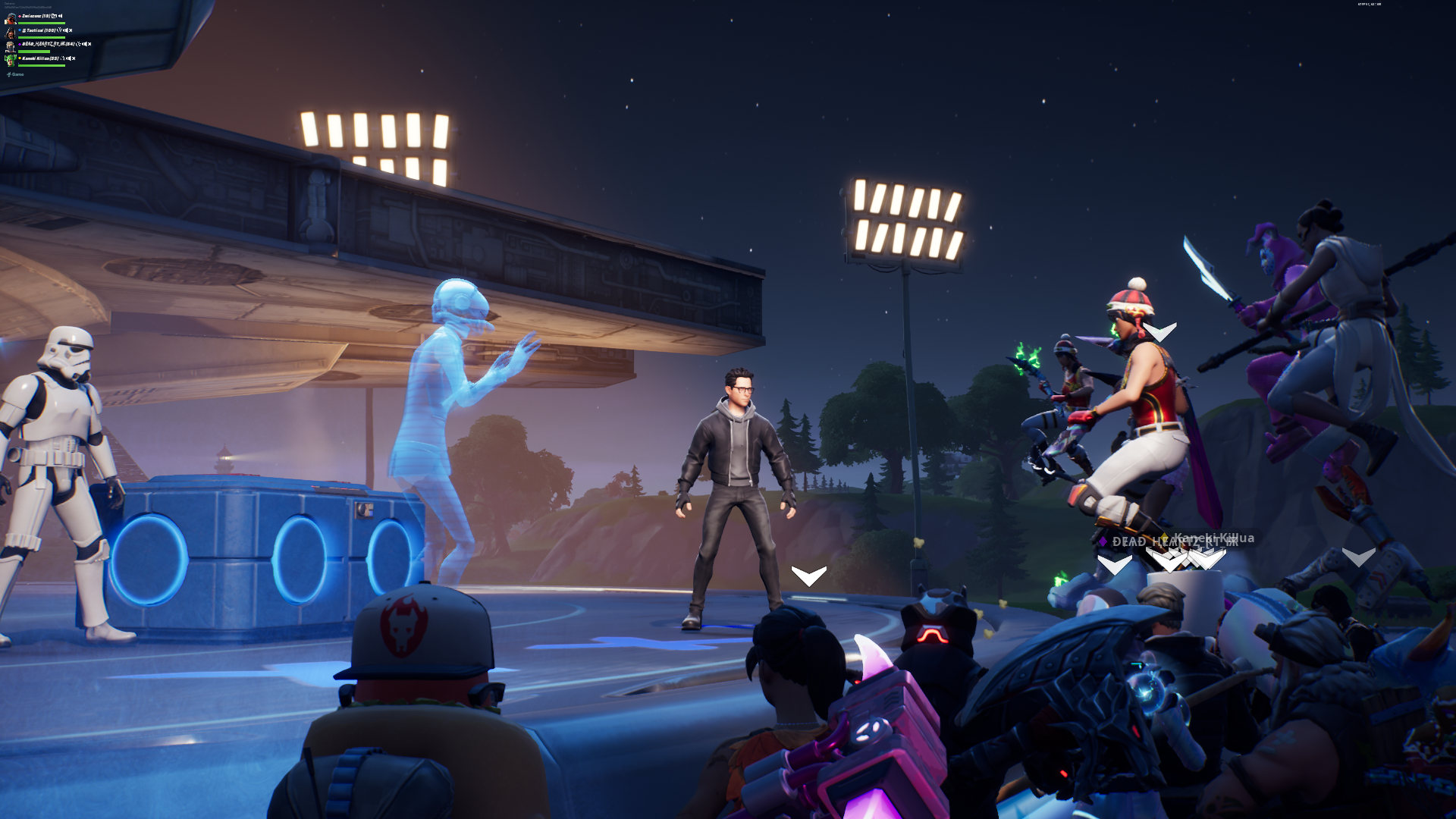 The event took place at Risky Reels, Fortnite’s drive-in. Prior to the event, Fortnite’s servers struggled under the load, with many—including myself—unable to log in to the Epic launcher or the game itself. (I ultimately managed to watch on my Switch, while my colleague Zack got in on PC.) Once I got in, I landed with the free TIE Whisper glider to Star Wars music. The event’s start was ultimately delayed to account for the issues, with the disembodied voice of Geoff Keighley letting players know.

Eventually, the Millennium Falcon appeared, pursued by TIE fighters. When it landed, Geoff Keighley appeared as a hologram, along with a Storm Trooper named FN-143 who appears to be actor Ben Schwartz. J.J. Abrams appeared in a skin modelled after his real-life appearance, saying he’d “never been thinner.” After far too much riffing, players jumped on coloured pads to presumably vote on what scene would be shown. (One of the options was a scene involving Darth Jar Jar, which was…probably not a real option.)

The winning scene involved a “Jedi mind trick” and showed Rey, Finn, and Poe entering a First Order base and killing some Storm Troopers. They were then stopped by two Troopers, and Rey used The Force to mind trick the two Troopers, allowing the group safe passage. This bit of the clip isn’t exclusive, and actually was shown earlier this month.

Following the short clip, players voted on their favourite lightsaber, and then the voice of the Emperor warned of “the day of the Sith” as the ships took off again. After that, players were given their preferred lightsaber colour and a giant duel broke out between all players. The game now has challenges with lightsabers, and the weapons can parry bullets. Before it was replaced by The Block in Season 7, Risky Reels has shown blips from Wreck-It Ralph and the winning entry of the Fortnite fan film contest. The drive-in made its return for Chapter 2, and for the last few weeks, it’s slowly been under construction in preparation for today’s event.

On the Star Wars side of things, Fortnite received some Star Wars skins, including a Storm Trooper and characters Rey and Finn. A Star Destroyer appeared on the map in early November, coinciding with the release of EA’s Star Wars Jedi: Fallen Order. Players who attended today’s event received free TIE Whisper gliders.

The Rise of Skywalker event is Chapter 2’s first in-game event since Fortnite went down following the black hole. At Thursday’s Game Awards, Epic creative director Donald Mustard reflected on how to “push the idea of what a persistent, virtual place can be.” He cited Marshmello’s in-game concert and the giant robot battle that took place shortly before the World Cup as examples of the evolution of Fortnite’s events.

In his acceptance speech for the award for Best Ongoing Game, Mustard said that “the more we’re trying to experiment” with Fortnite’s world “we’re finding more and more that our goal is to try to create a metaverse, to create a place where all IP can live together…where we can create a totally new, emergent type of media.” The Star Wars event, whose allure is shared between Star Wars fandom and the lessening novelty of an event inside a video game, is certainly an example of that.

I’ll admit I’m not a big Star Wars guy—I watched the original three movies in seventh grade to impress a boy in band class, then never paid attention to them again—but it’s always fun to see how Fortnite players act when they get together to do something other than murder each other (once they get into the game, that is.)