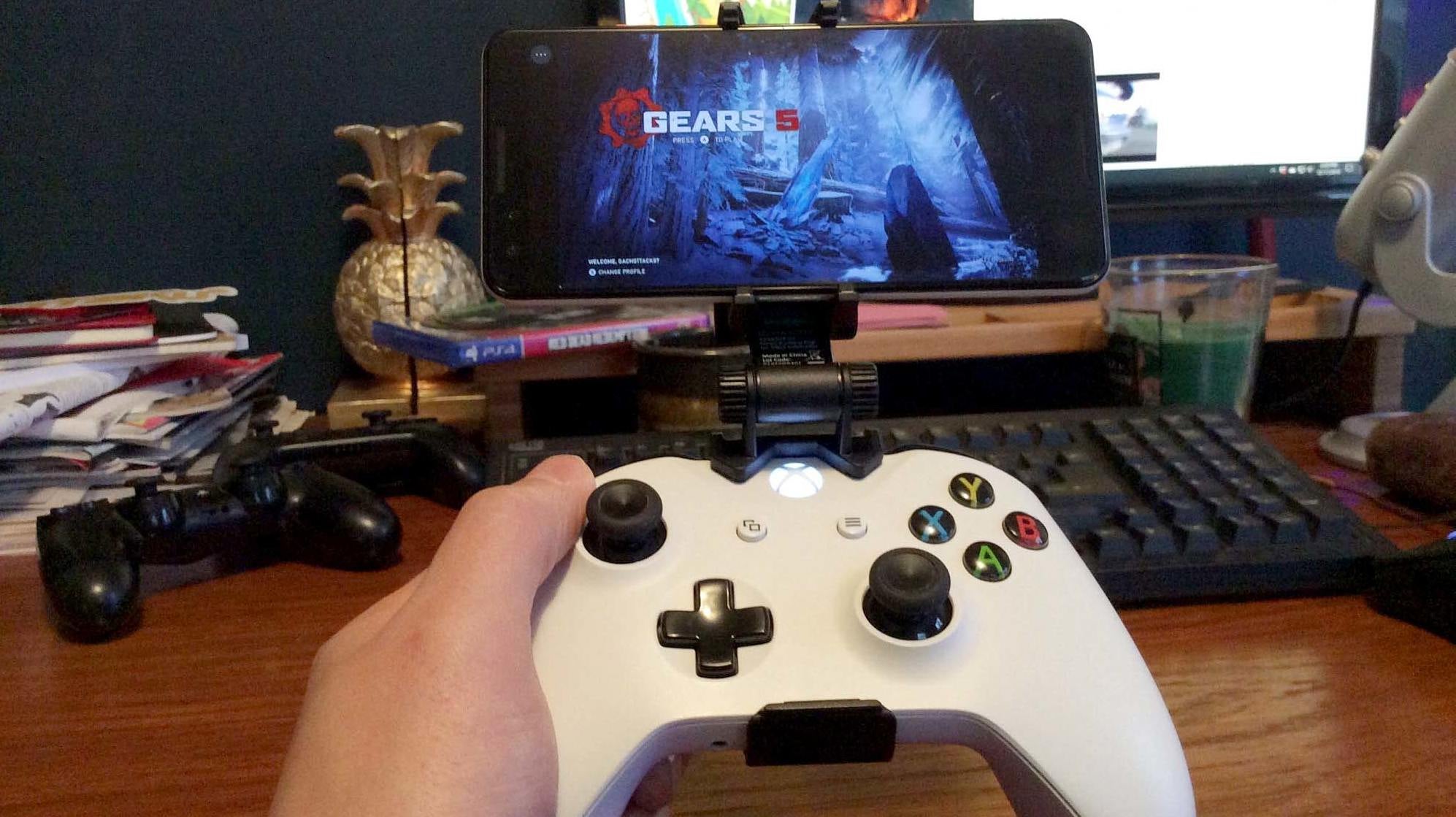 Power A’s new mobile gaming clip looks like the sort of accessory I might have bought for my Game Boy Colour back in the 90s. It’s a mess of black plastic that makes weird clicking noises and, to the untrained eye, looks like garbage. But it’s made my Xbox One controller into an excellent portable gaming device.


While it’s made by Power A, the MOGA Mobile Gaming Clip is officially licensed by Microsoft and designed specifically for people using their Xbox One controller to play games on their phones. That means it doesn’t fit Sony’s Dualshock 4, Nintendo’s Switch Pro controller, or Google’s new controller for Stadia. While it’s optimised for one particular form, the clip offers a tight, solid fit that didn’t come off my Xbox One controller no matter how violently I waved it around in the air. 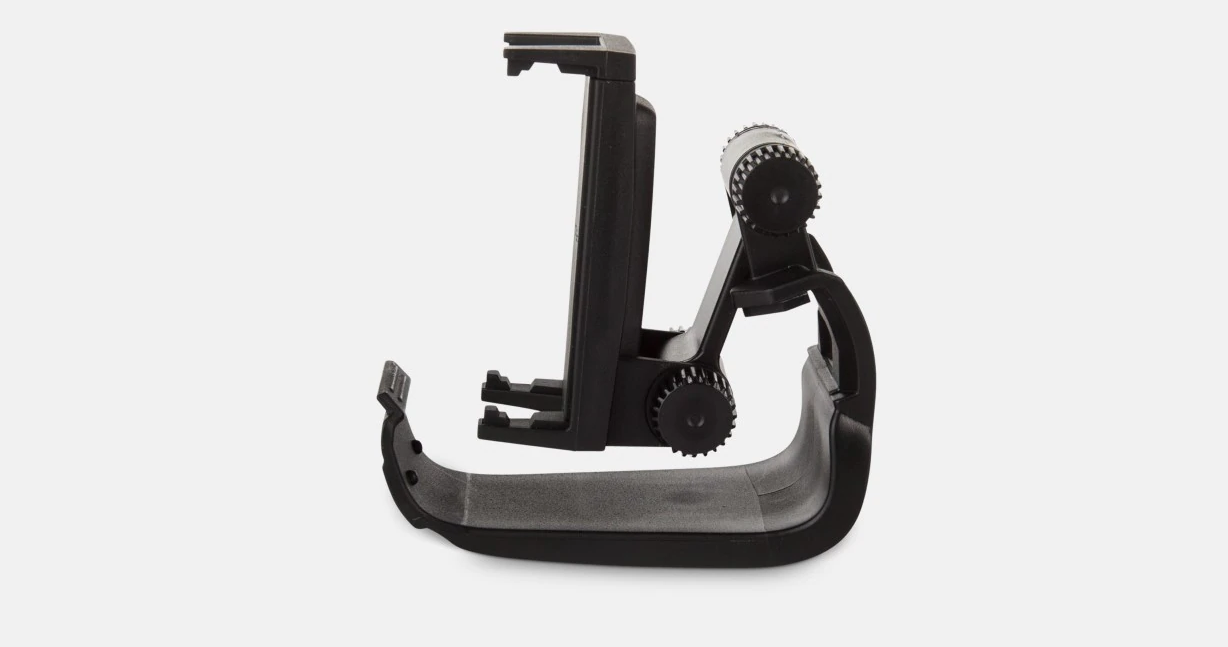 In the 24 hours since Power A sent me the clip to review, I’ve taken it on the bus, in the car, and to exotic locations like my nearest Starbucks. It feels weird pulling out my Xbox One controller in public, but I can fit the entire setup in my winter overcoat pocket whenever I get overly self-conscious (something that matters a lot to me when it comes to all my handhelds and why I will probably end up buying a Switch Lite at some point). It’s nice to finally be able to play games out in the wild using one of the best controllers ever created. Having my phone hooked over my Xbox One controller looks incredibly goofy in public, but whether playing Fortnite or streaming Halo through xCloud, games feels better when the ergonomic fit is just right. 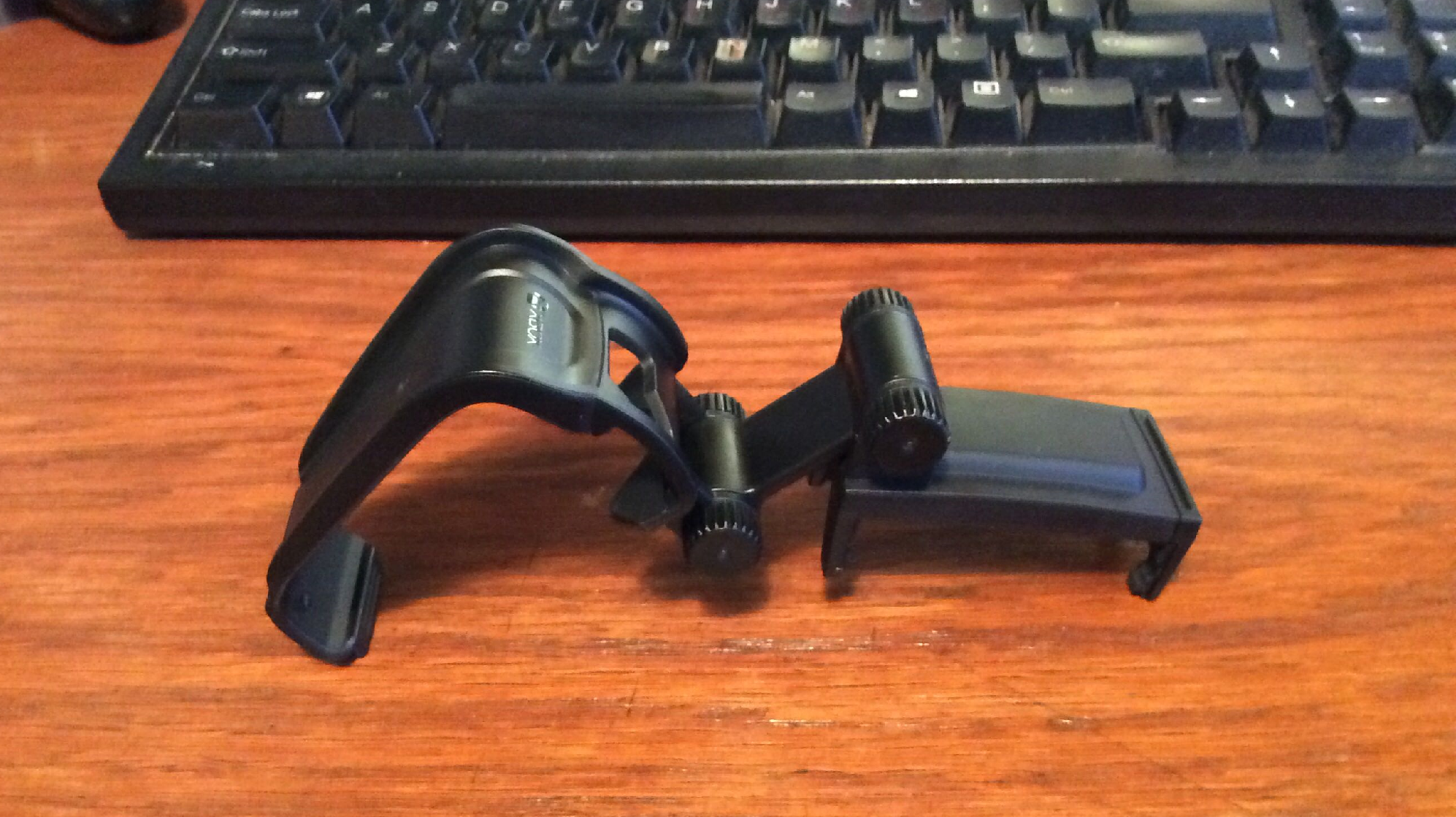 Like the mount you might have for your phone in the car, there’s not much to the MOGA clip. One end grips your controller from underneath, while the other has two small claws with spring tension that hold onto your phone. In between are two pins that can be loosened and tightened to adjust the viewing angle. Unlike other clips that only have one pivot point, this additional joint offers a little more flexibility, letting you change how far away the phone is from your controller, for instance, while still keeping it parallel.

I’ve spent the last day using it with my Google Pixel 3, which at 2.68 inches by 5.73 inches felt like a good size overall in terms of the weight it added to the controller and the distance I could hold the phone from my face. The clip’s max expansion width is 3.11 inches, so it should fit even the big boys like the Pixel 4 XL, Galaxy Note10+, and iPhone 11 Pro Max (if you take the phone case off). 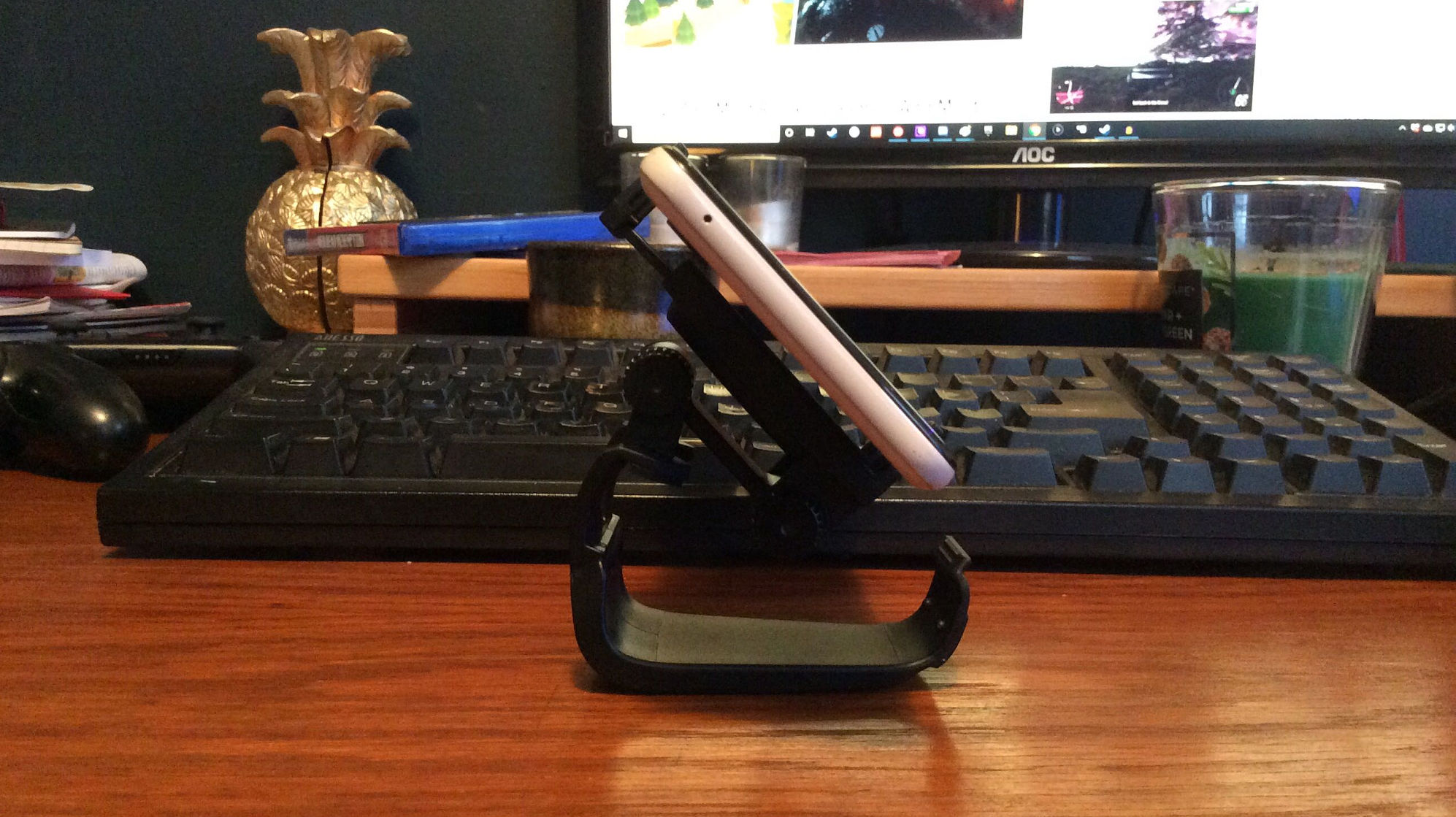 The clip wobbles a little in this position but is still sturdier than the Switch’s built-in kickstand. 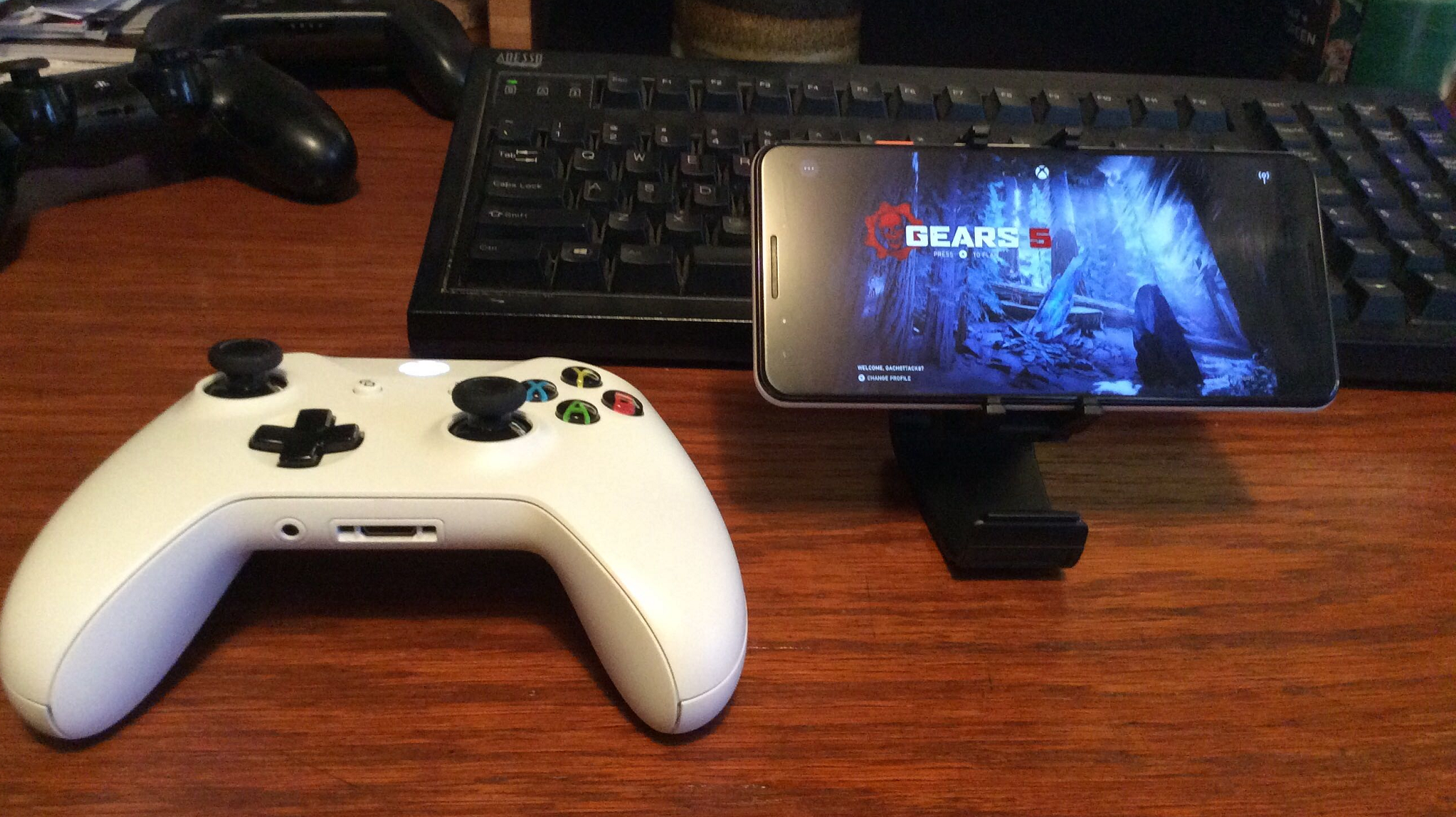 One thing that can be an issue is making sure the clip doesn’t grip the phone where a volume or power button is, but fortunately there’s the slightest of carve-outs where the clip makes contact. On my Pixel 3, I could keep the phone centered without any of the buttons getting pinched. Every part of the clip that makes contact with your phone is also rubberised to prevent scratching.

While not marketed this way, the clip can also be contorted into a make-shift kickstand. The base is big enough that I didn’t have any issues with my phone accidentally falling over when the surface it was on shook. The MOGA clip is priced at $US15 ($22), which may seem like a lot for a hunk of plastic with a few screws, or a great deal for being able to play games on your phone on an Xbox One controller. I haven’t tried any of the other clips out there at the moment. SteelSeries has one, and there are plenty of Brand X alternatives on Amazon, all of which run around $US10 ($15) or less. Those aren’t specifically designed with the Xbox One controller’s contours in mind though. In the end, an extra $US5 ($7) feels like a small price to pay for the Microsoft handheld I never knew I wanted.