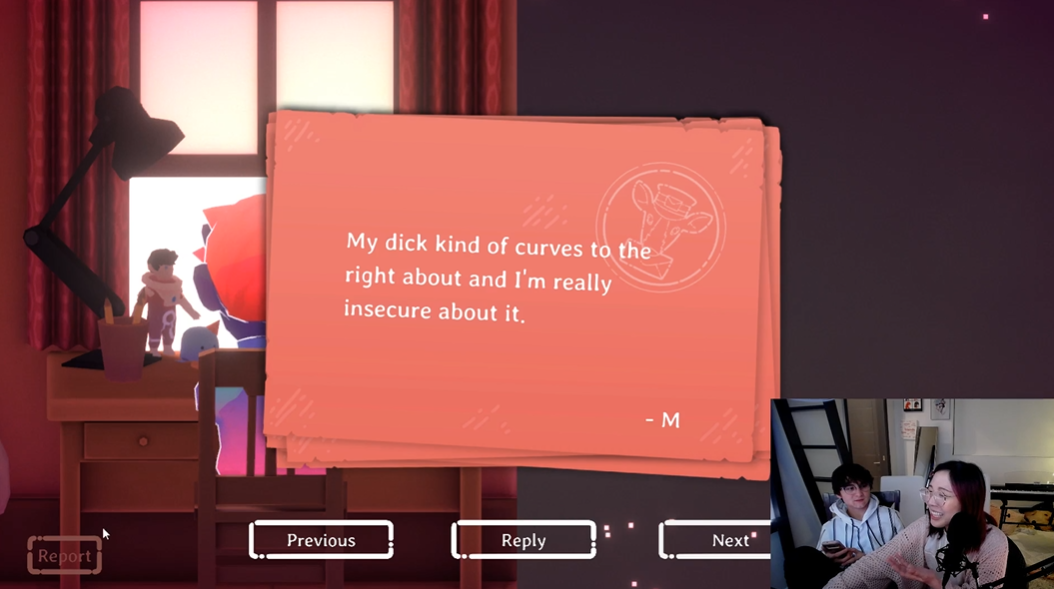 I played Kind Words, a game about anonymously sending letters expressing fears, anxieties, and other concerns and receiving kind responses from real people, for 10 minutes today. I was immediately assaulted by a barrage of unironic positivity, I came away feeling immensely better than when I started—after just 10 minutes. Such is the power of a community hell-bent on being kind. What happens, though, when Twitch streamers and their sometimes troll-y communities enter the fray?

The answer will probably not surprise you: Trolls troll. For example, earlier this week, generally wholesome streamer Lily “LilyPichu” Ki played the game on stream, which caused her audience to write letters intended to be read on stream. “Recently, my friend who is a streamer has been down lately,” read one. “Please give her some comfy words that will make her day.” Others seemed less sincere. “My dick kind of curves to the right and I’m really insecure about it,” read another.

Maybe that person was authentically sharing something deeply personal, but Ki—after getting a laugh out of the letter—nearly reported it as inappropriate before deciding to just discard it.

As far as small, relatively simple games go, Kind Words has become quite popular, with nearly 1,400 reviews on Steam, 98 per cent of which are positive. It has an established community across not just Steam, but also other platforms like Humble and an active Discord. Consistent moderation and strong norms within the community, designer and studio founder Ziba Scott believes, keep Kind Words from being overrun by trolls—even when streamers show up at the gates with their legions.

Kind Words Is Basically Wholesome Twitter With A Cute Deer

If Twitter was less of a hellscape and had lo-fi beats playing in the background whenever you scrolled through your feed, the experience of it might be a little like Kind Words.

“I’ve watched a dozen or so streams and I generally appreciate them,” Scott told Kotaku in an email. “Kind Words mostly attracts sincere players, and the rest are background noise that paid for the privilege of being dinguses on a platform that has no rewards for bad behaviour. They rarely hang around long.”

Kind Words makes no bones about its purpose. When you begin the game, it tells you that it’s a place for “real people” to discuss “real problems” and quickly adds that “this is not a place for mean jokes, bullying, or flippant responses.” It encourages players to report people who engage in that kind of behaviour. This, evidently, makes a strong first impression; I’ve never encountered any trolls while playing Kind Words. Moreover, as the game’s own players have pointed out, trolling in Kind Words isn’t all that fun. When you respond to requests in the game, you don’t get a reaction. You just send off some (hopefully) kind words in response to another person’s concerns, and that’s it. If someone receives a troll response, they can just report it and get on with their day.

“Out of well over half a million letters written, we’ve had to address just shy of 3% of that content, and most of that is off-topic—not trolling.”

That does not mean trolls don’t exist, however. Streaming incentivizes trolls to emerge from their caves precisely because they can get an immediate response—generally in the form of acknowledgement from their favourite (or least favourite) streamer. Some players also feel like streaming is at odds with one of the game’s central pillars: anonymity. Kind Words was built around the idea that players would send requests and “aeroplanes”—tiny, unprompted messages of kindness that flit across other players’ screens in the form of paper aeroplanes—sans identifying information, and only to other players of the game. Streamers unintentionally tamper with that delicate balance.

“Our Discord had a good, if somewhat intense discussion recently about the privacy implications of streaming,” said Scott. “Players can see every other players’ anonymous requests and aeroplanes in-game. But some of my players are uncomfortable having their in-game requests and aeroplanes being viewed outside of the game. They expressed concern that it felt like voyeurs peeking in who weren’t committing themselves to reading it in the same emotional context as it was intended.”

Scott does not believe, though, that it’s time to curtail streaming and other forms of sharing of Kind Words content like YouTube videos and screenshots. “I appreciate [players’ concerns], but not to the extent that I want to wage an uphill battle against sharing content that’s public within the game,” he said. “I think more good comes of it than anything. Even the streamers I’ve watched who seemed to be way out of their element playing Kind Words delighted me, because that’s where the greatest potential for attitude change is.”

Broadly, he concluded, trolls—whether clinging to streamers’ coattails or not—have caused minimal problems in Kind Words: “Out of well over half a million letters written, we’ve had to address just shy of 3% of that content, and most of that is off-topic—not trolling. We haven’t seen an individual streamer’s followers cause any significant problems.”

Scott again chalked that up to strong community norms.

“I don’t want to jinx things, but I think of Kind Words as a fancy vase with a deceptively heavy base,” he said. “It can get knocked around a lot more than people think and it will right itself. I’d estimate 80% of articles about Kind Words include some fearful comment about the future moment when the trolls arrive and ruin everything. In practice, the more obvious the troll is, the quicker the community reports them and they’re handled. The really obvious trolling never even gets seen by users.”