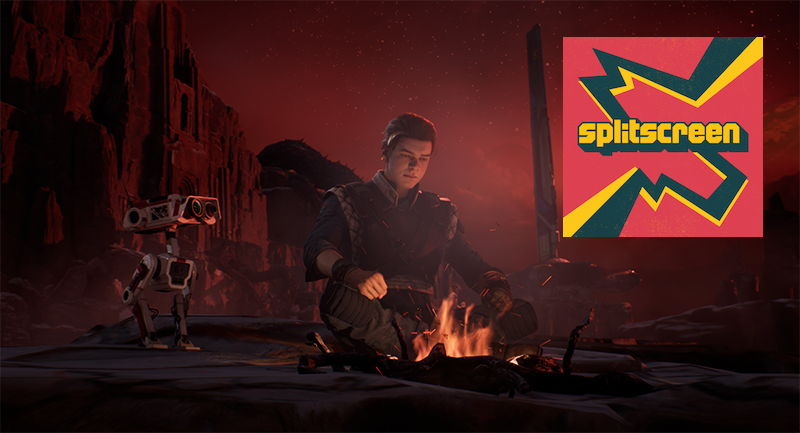 The end of Star Wars Jedi: Fallen Order totally rules, and it rules even more if you don’t know anything about it. If you have beaten this game, then you’ll enjoy this week’s episode of Kotaku Splitscreen, in which we dissect the game’s take on the Force, the Jedi Order, and also that one character who shows up at the very end.

First, we talk about other games we’re playing, such as Luigi’s Mansion 3 and Baba Is You, before we jump into the news (19:11) about the upcoming Half-Life VR game and the two Xbox consoles. Then we break for off-topic discussion of Watchmen on HBO (43:19) and close out the show with a spoiler-filled chat about Star Wars Jedi: Fallen Order (67:48).

Jason: [Star Wars Jedi: Fallen Order] has the idea of the Jedi as representations of colonialism, coming in to places to try to save people and leaving with everything even more fucked up than it already was. The interventionists of the universe! The critique of that, I thought, was really ballsy and interesting and was not something I expected to see in the latest Star Wars game, a game that actually critiqued the Jedi and was willing to say, “You know what? Maybe it’s not a good idea to go and reassemble an order of the Jedi and try to recreate what wasn’t really working so well before.” It feels like it challenged the status quo in a similar way to The Last Jedi, and so now it makes me more curious to see what Rise of the Skywalker does, and see if JJ Abrams goes back to the things he set up in The Force Awakens.

All that said, I really enjoyed it. I was really stoked about not only the themes they set up and established and explored, but also, what they’re going to do with the sequel now that they have this rag-tag group of people and they are no longer interested in reforming the Jedi Order. So what do they do? I’m very curious to see it.

Kirk: I agree, I liked all that stuff. I think that looking back on the story from the beginning—they plant the seeds for a couple of those cool elements of the story, the things that go ways I wasn’t expecting. The fact that a Nightsister joins your party, and will hopefully be a playable character in the sequel.

Maddy: Fingers crossed! That’s what I’m really hoping for, is that Merrin will be playable or the lead character in the next one. It would be so easy for them to do that. And she could have different collectible powers and it would make more sense for her to, because she has different ways of using the Force. I hope they do that.

Kirk: It would be cool. I could see them having two protagonists, because they would want to maybe keep it safe and have one just boring Jedi who has Jedi powers, because people like that. But I hope she’s playable, because right, new powers. Exploring a new place in the Force is cool.

And there are these things, like the fact that we know that Cere used the Dark Side. That is introduced really early on, and I was like, that’s interesting. That’s actually never really been a plot point—I’m sure it has in some Star Wars, but that I could think of, where a good Jedi used the Dark Side fully to fuck people up, and then was like, “I never want to do that again.” And then she reconnects with the Force, which I wasn’t fully expecting. She didn’t get killed or sacrifice herself. She didn’t turn evil. There were all these ways I was expecting her arc to go, and it didn’t go any of those ways. It was just cool, watching her—there’s the one scene when you’re infiltrating that base at the end, where you watch her through the glass, and she just wrecks dudes and is doing all this cool shit.

Maddy: Yes, and it’s like an echo of the other time when Cal is watching his other master through the glass, and it doesn’t go well. But then Cere is on the other side of the screen. I was like, “I see what you’re doing, game, and I like it. Keep it up with the mirroring of stories, because that’s Star Wars’ whole deal, is just telling the same thing over and over again.”

Kirk: I liked that. And I liked that, throughout the story, they do keep bringing up the idea that maybe reforming the Jedi Order isn’t a good idea, and maybe you’re not going to be helping these kids if you bring them all together. I thought in particular there were a lot of really cool narrative, non-combat sequences in the back third, where Cal has a vision and sees stuff. He’s walking through these vignettes of his future, if he becomes this Jedi mentor and brings all these kids together, and you see the Inquisitors find them and you see them under attack and the kids are getting killed and indoctrinated and everything’s falling apart. And the way they put that together—there’s just a lot of talented people at Respawn, man. It’s cool when I’m playing a sequence and I’m just like, “This is cool. Someone had an idea for this.”

There’s a part where you’re climbing a wall, and then it looks like you’re crawling through a war trench, and there’s these kids crouched down. Everything inverts. But Cal kind of looks like he’s crawling, while he’s climbing. And you can hear sounds of battle. I was like, this is sweet. There’s a lot of clever shit like that.

Games like this also, especially that first level, since I had to play through it twice—that first level is so bonkers polished and impressive. It’s totally the thing that everybody sees and is like, “Holy shit, look at this game!” And then the game does hit this more lower gear, and there’s more long conversations between characters that are just standing still and lip-synching, and it just feels like, ok, you spent a lot of money in the beginning, and now maybe it’s going to peter out. But the fact that it totally ramps up in the back third is surprising.

Maddy: At the end, yeah. Which is why it’s sad that some people might stop playing it in the middle, because there are these other things about the game that are tough. I know we got at least one email from somebody who was frustrated about having to walk all the way back to the ship every time. Zeffo is really big, and it is super annoying to do it every time on that planet. At least, I found it annoying. Trying to remember where the ship even is—I don’t know.

Maddy: I definitely spent an hour walking in the wrong direction, or taking the wrong elevator to a dumb place, and then having to go all the way back. There are some things that are kind of irritating in the middle of the game.

Jason: It just desperately needed a “return to ship” button.