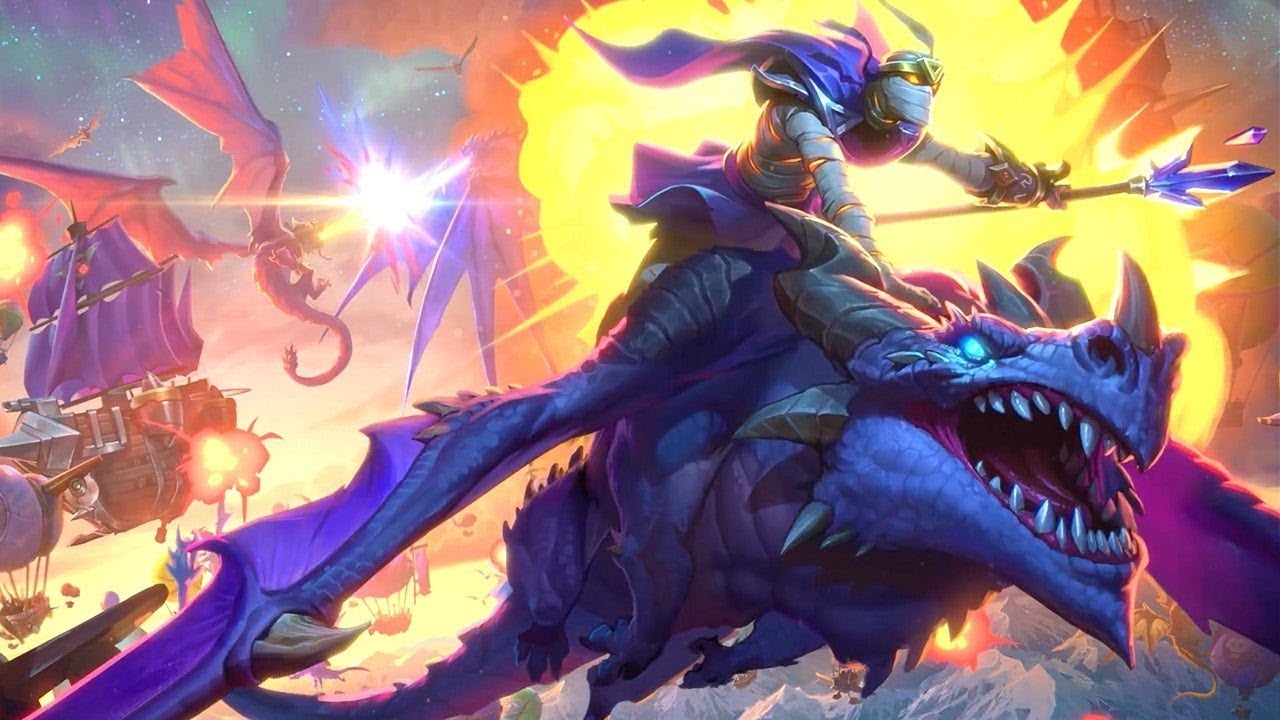 We all have games that we play to relax. They’re waiting for us when we get home, with low stakes and a casual atmosphere that invites us to unwind and forget our worries. For my mum, that’s Solitaire. For me, it’s Hearthstone. But its latest expansion has changed how I approach my long-time relaxation game. For the first time, I’m getting serious, and it’s been a rewarding change of pace.

I’m usually someone who plays action games. I grew up on a diet of online shooters like Quake, Counter-Strike and Team Fortress, which evolved into a love for Overwatch and Battlefield. Playing tense combat games is fun, and I take it pretty seriously⁠: I once spent a year with an Overwatch coach trying to improve my gameplay⁠. I’ve always needed something to balance that out. Sometimes, that can be a lengthy role-playing game. Often, it means Hearthstone.

Card games have a reputation for having steep learning curves thanks to their vast arrays of cards that need to be studied. In the worst cases, players feel locked out of competitive gameplay since they don’t have a massive collection of cards like their competitors. This is true to some extent, but the arrival of a new expansion can reset a game’s dynamics and make it easier to break in. Hearthstone’s latest expansion Descent of Dragons, released on December 10, has provided the perfect chance for me to turn a long-time casual treat into something more competitive.

I owe much of this to the new cards, which have made a variety of interesting decks possible thanks to a mechanic called “invoke.” Certain classes can add a special card to their deck called Galakrond. He’s a nasty evil dragon dude, and if you play his card, you get special abilities and minions. Other cards can “invoke” Galakrond, and playing these cards increases Galakrond’s strength.

For instance, playing Galakrond in a Shaman deck without invoking will summon 2 minions with minions with 2 health and 2 attack. That’s ok maybe, but if you invoke enough you can summon minions with 8 health and 8 attack, while giving yourself a claw attack that does 5 damage. Build you deck right, and you have a very powerful tool at your disposal. So powerful, in fact, that the early days of the expansion were dominated by Galakrond Shaman decks.

That was the meta, and I gladly played into it. I had the cards and it was easy to see the value. Not only was the deck fun to play, it also was powerful enough to slowly earn ranks in the competitive mode. I’m someone who previously enjoyed playing casual matches where rank isn’t really a concern, or diving into solo adventures with their specially-created decks and heroes. But Galakrond Shaman is fun as hell, and whetted my appetite enough that I started building other decks for online competition. I had my toes in the water. It was time to dive into the deep end.

It sounds funny to say that I’d not really taken Hearthstone deck building too seriously all these years, but that really was the case. I gave most of my custom decks a “messy” descriptor: Messy Mage, Messy Paladin. For me, deck building was a chance to play around. Now, it’s become a chance to solve a greater puzzle and engage in a much larger and more cutthroat ecosystem. This means keeping track, at least to a certain extent, of popular decks and assembling potential counters or even my own versions.

It’s a mix-and-match process. I’ve put together workable versions of certain decks on my own without paying attention to what the best possible versions are. I want to be reasonably competitive, but I also want to enjoy the process of making my own decks. Some of that is because there’s a certain stigma to “netdecking” in card games, which is when you simply look up high value decks and copy them exactly. I’ve looked online occasionally to see what players are favouring, but that’s never a perfect indication of what’s strongest.

My Galakrond Shamandeck was technically nerfed with an update that changed the statistics on certain card, but it’s enjoyable to play, and I can still make it work. So does it matter that there are Priest decks with better win rates? Should I care that “Face” Hunter is so damn popular? Should I look up a superior deck and copy it?

Maybe if I was at the highest levels, but I’m still climbing the middle rungs of the competitive ladder. I have a few things that work—the aforementioned Shaman, a “treant” Druid deck that fields tons and tons of minions, a silly but surprisingly useful Hunter deck built around combining mechs—and that’s largely enough for now. They fit within the meta, and they do alright. There’s also new things to try as time goes on too, particularly when I lose. I’m messing around with Pirate decks after facing a particularly nasty one. (I will confess that I do have a Warlock netdeck, though. Mostly to mess around with their version of Galakrond and see what the fuss is.)

Shifting your mindset on a game you love from a casual approach to a more active and hardcore mindset paints everything in a new light. The card interactions that I once looked upon as amusing curiosities, I now see as opportunities. Where I once bask in chaos, I long for control. The chaos and curiosities remain, particularly if I play Hearthstone’s auto-battler mode, but my perception of them is wildly different. Yes, it’s awesome when you or your opponent draws a card and it’s exactly the lucky chance needed to turn things around. That’s always been a thing of beauty. Yet, the idea that I might ensnare my opponent in a tightly planned web of card interactions, no luck required, sometimes felt like a distant dream. Casual play was reactive play; tricky turnarounds were best left for the esports pros I saw in tournaments or on YouTube. Now, it doesn’t seem so out of reach.

Hearthstone, like many games, is like a gem. You can admire it from one angle, deeply appreciating the cut from your preferred perspective. But twist it even a little, and a new shape comes into focus. Before, I’d saved my diehard inclinations to games like Overwatch or even for forays into speedrunning my favourite games. I can still enjoy Hearthstone or games like Final Fantasy XIV as relaxation tools, but there’s a part of me that feels more driven heading into 2020. It’s meant reassessing my favourite games and buckling down. It means tilting the gem until I see every facet.