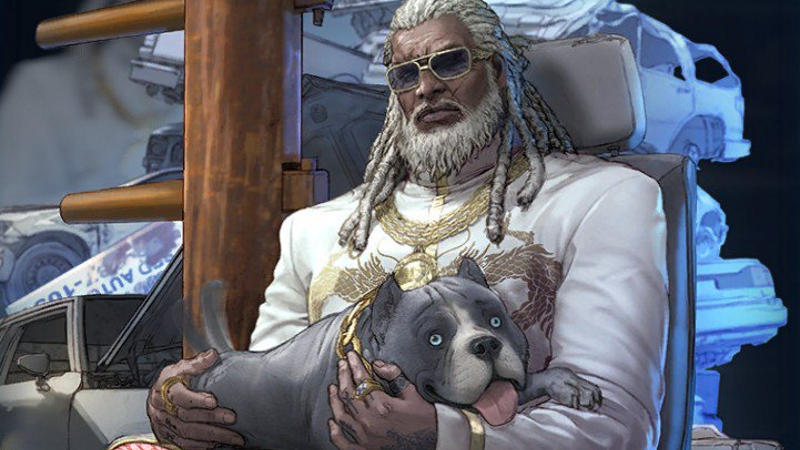 Illustration: Bandai Namco
To sign up for our daily newsletter covering the latest news, features and reviews, head HERE. For a running feed of all our stories, follow us on Twitter HERE. Or you can bookmark the Kotaku Australia homepage to visit whenever you need a news fix.

After previously being revealed at Evo back in August, Tekken 7 newcomer Leroy Smith is finally playable via an update released earlier in the week. This elderly Wing Chun master proved popular in the fighting game community before release thanks to his unique mixture of American and Chinese fashion, but now that he’s available, folks are finding a new reason to fall in love with Leroy: his pet bulldog Sugar.

First and foremost, Sugar is a good girl. And while it’s unfortunate that there aren’t any button combinations to make Leroy pet her during a match, he can do the next best thing by calling on her assistance to trip up his opponents. I assume Sugar’s abilities aren’t a tool we’re going to see used frequently in high-level play—the startup animation is quite long and leaves Leroy vulnerable—but when her tackle does land, a super-damaging follow-up combo is all but certain.

a Leroy death combo with no rage, no cane, and a little bit of sugar ???? pic.twitter.com/5gJ5bQnW5G

But Sugar is fickle, and as such, she can decide randomly to not attack when called by Leroy. I wouldn’t say this makes her a bad dog—no, she just has other priorities. Plus, they say dogs can be good judges of character, so who are we to argue with Sugar’s choice not to mow down the opponent? Maybe they have treats in their pockets? Who knows! All I’m saying is that Sugar is still a good dog and I won’t acknowledge any comments to the contrary.

this is what happens when sugar decides not to attack lol (via https://t.co/7jmPBRyPOn) pic.twitter.com/00lJuYQpU8

I was initially worried that Sugar’s involvement in these martial arts battles might constitute some form of animal cruelty, since matches often involve demonic entities giving fighters supernatural powers, as well as destructive military robots, not to mention other animals like brown bears, pandas, kangaroos, velociraptors, Bengal tigers, and more. Fortunately, she appears to be completely invulnerable to just about every attack that’s been thrown at her so far, including energy waves and even another Sugar in Leroy mirror matches.

As is often the case, the fighting game community is hard at work figuring out Leroy’s quirks. When he calls Sugar, for instance, he steps to the side and crouches, which allows him to avoid certain attacks. The startup on the assist is still very, very long, making its benefits situational at best, but this might be a good way for players to style on opponents who get too greedy. Anything that involves Sugar is great in my book.

In conclusion: Sugar is good. Sugar is pure. Sugar is a welcome respite from a terrible world run by increasingly militant corporations and CEOs who throw their children into volcanos. Thank you Sugar for reminding me what love is. Good girl.