‘Nintendo Play Station’ Prototype Will Be Auctioned Off In February

Its owner says he’s turned down million-dollar offers for it in the past, but now, the original prototype of the PlayStation—a Super Nintendo with a CD-ROM drive attached, created via a partnership between Sony and Nintendo—will be auctioned in February via Heritage Auctions, the company has said.

In 2009, a man named Terry Diebold unknowingly bought the incredibly rare prototype at auction, in a lot of abandoned property from a former Sony executive. In 2015, his son rediscovered the machine in the family attic, which caused a great stir in the game collecting, preservation, and historical communities. Since then, Diebold and his son have toured the “Nintendo Play Station” around the world to many classic gaming expos and other venues, building up its reputation as the ne plus ultra of classic gaming collectibles. Now he’s ready to let it go and pocket the cash.

“I can’t keep losing money,” Diebold told Kotaku in an email. “I’ve put a lot of work into this by travelling with it and we have made nothing on it. Every trip that we… have taken with it has cost us money out of pocket.”

Heritage, which bills itself as the “world’s largest collectibles auctioneer,” only started selling video games in January of this year. Since then, it has auctioned some games for record-obliterating prices. It’s sold sealed copies of The Legend of Zelda and Bubble Bobble for nearly $US20,000 ($29,211) each. A sealed Donkey Kong 3 nearly hit $US30,000 ($43,817). The biggest sale so far has been a copy of the original Mega Man that reached an eye-watering $US75,000 ($109,541). 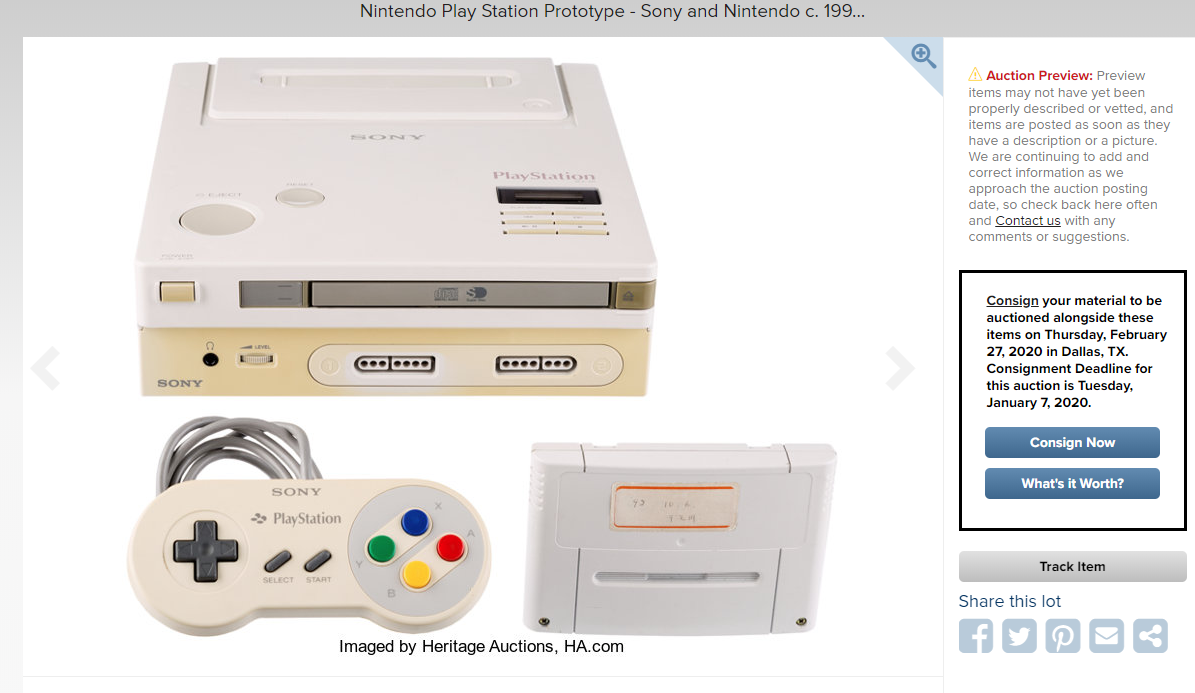 As deep-pocketed collectors from the comics and coins world begin to get into games, prices are going even higher than that. A first-print sealed copy of Super Mario Bros. sold for $US100,150 ($146,274) in February to a group of buyers that included Heritage Auctions’ chairman. In October, a man spent over $US1 ($1.5) million in a single purchase to acquire just 40 collectible games.

That’s why it’s likely that some big money will be splashed out in this auction. “We turned down 1.2 million from someone in Norway,” Diebold said. He said that after paying taxes on that amount, splitting the remainder 50-50 with his son, and paying off all his outstanding debts, he “will pretty much end up with nothing.”

Heritage Auctions said that the online auction, which will begin on February 27, will not have a reserve price. “It’s definitely going to sell, and the market will determine the value,” said Valarie McLeckie, Heritage’s director of video games. While Heritage often lists an estimated value for the items it auctions, it won’t do that in this case, McLeckie said: “In the case of this particular item, since it’s never been sold at public auction before, there’s really no way to tell.”

Diebold, meanwhile, is resigned to the fact that this auction will represent the end of his stewardship of this gaming Holy Grail. “Unless the person that buys it wants to have me involved in it from time to time I will probably never see it or hold it again,” he said.