Pipeline is a board game about buying cheap crude, pushing it through loads of pipes then selling it for cash. It’s clean, it’s stressful, and I’m still not 100% sure whether I like it or not.

It’s a Euro-style game, which means that it’s abstracted to an extent from its subject matter and interested more in mechanics than theme, which is both a blessing and a curse for Pipeline. It’s a blessing because in 2019 I am absolutely not interested in pumping oil out of the ground, but also a curse because without that thematic link—or any thematic link—it struggled to maintain my interest.

An important preface now for more serious board game types: I am not normally a fan of Euros. I tend to find them stale, and don’t get anywhere near as much satisfaction out of their sterile systems as I do more co-operative, literal experiences like roaming dungeons killing bad guys with dice. If you’re a Euro fan, I just wanted you to know going into this that we’re maybe not going to be on the same page.

But part of the board game review process on this site has been about me going on a journey from “guy who knows about video games” to “guy who now is also slowly learning about board games as I go”, and so I hope my critical thoughts on this are still useful, regardless of what types of games you like to play.

Anyway! Pipeline. It’s game where the central hook is that there’s a lot going on, a lot you can do and not much time to do it all. You have to buy oil, you have to buy pipes to squirt it through, you have to arrange those pipes like a miniature sliding tile puzzle game into an optimal pattern.

And that’s just the basics, just the stuff you need to actually get the oil flowing. Then you can start taking on contracts to produce specific types and quantities of oil, or you can pick up special powerup cards, or you can buy mechanical pumps to do the hard work for you, or buy bigger tanks so you can hold more oil.

That is a lot to do, and the game only lets you do one of those things each turn, and there aren’t many turns in a game, so once the clock starts ticking and you look across the table and see everyone else building and buying stuff, it gets pretty stressful! Pipeline is the kind of game where, because time is so limited and your options so many, that if you’re even one turn behind everyone else’s efforts, you can blink and suddenly find yourself practically out of the game.

My stress levels were magnified by these little red tokens that are taken on for not fulfilling contracts, or taking on debt to increase my operations, which at the end of the game cost you precious money, and that money is never handed out, you have to be selling oil to get more money, and you’re not always selling oil because you can only do one thing per action and sometimes you’ve gotta build instead of pump and GAH.

If you’re more immune to the stresses of this type of experience than me, the breadth of options available in Pipeline mean that as the game progresses, you can in very Euro style start building impressive engines, as your purchases and systems start rolling to generate more money which generates more money.

It’s all very elegant, because each time you play you can take a slightly different approach towards achieving the same goal, as will everyone around you, but you’ll all still be meeting somewhere at the end, selling oil and counting cash. I especially like the way that, aside from someone buying a load of pipes early on, you can’t really block or keep anyone from doing anything.

I can see how this is cool for Euro game fans, but the whole process a little too abstract for me, and I was definitely not a fan of some of Pipeline’s thematic decisions. Why is there orange and blue oil? Why can I only process a small quantity at a time? Why is the process or building oil pipelines so random, when surely you’d want to build them as economically and straightforward as possible?

Pipeline’s weirdness can’t be written off by simply saying “oh it’s a Euro”. I’ve played a number of other games in 2019, from Panamax to Teotihuacan, where despite their emphasis on similarly abstract mechanics I still felt like I was doing, albeit in a roudabout way, what the game was about. In Panamax I was getting cargo ships through the canal, and in Teotihuacan I was running an Aztec construction gang.

In Pipeline, I had no feeling at any point that I was actually involved in the production of oil. Nor is there any commentary about what the game is doing, no insight into the realities of what’s a very expensive, dangerous and politically important business. I mean, I’m not asking for a simulation here, but it really feels like the theme is draped over the game with the barest of relevance, to the point where I wonder if Pipeline might have been better served trying to base itself on a different kind of production.

Pipeline’s graphic design is gorgeous, and lets you pick up a number of the game’s key rules at a glance.

At least the whole thing looks nice. There’s very little humanity to it, but Pipeline features some of the cleanest graphic design I’ve ever seen for a Euro game, which aren’t usually as renowned for their looks as they are their depth. Beyond looking nice, the design also provides some welcome gameplay assistance as well, clearly and obviously illustrating a number of the game’s key rules right there on the board.

So Pippeline isn’t for me, I don’t think, but there’s still a lot to admire here. The process of getting oil from crude to sold is cool, and the options available to you make every turn an agonising tactical choice. I just wish, as someone who genuinely values theme, that they’d found something else to paper over the top of it than a business which doesn’t really fit the game. 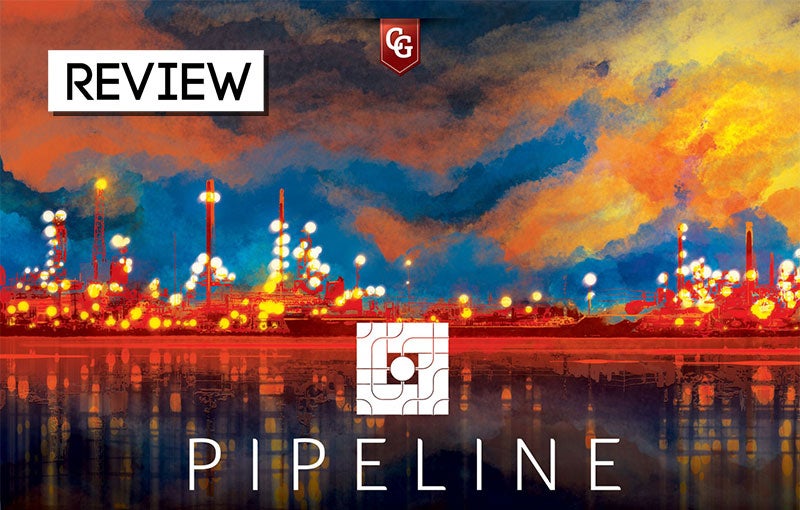