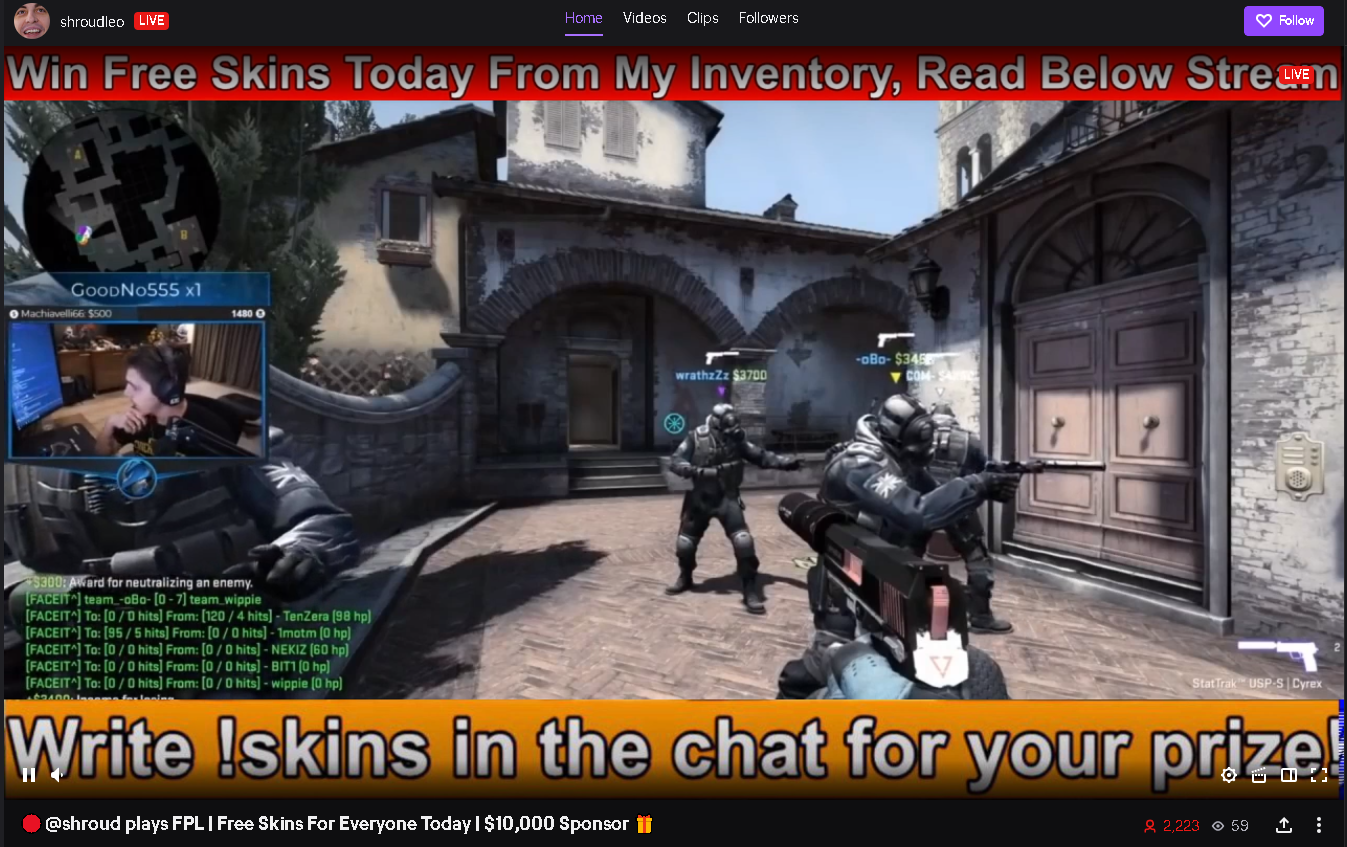 Image: <a href="https://www.reddit.com/r/Shroud/comments/e7rmju/how_does_twitch_let_something_like_this_even/">ProtoExplorer</a>
To sign up for our daily newsletter covering the latest news, features and reviews, head HERE. For a running feed of all our stories, follow us on Twitter HERE. Or you can bookmark the Kotaku Australia homepage to visit whenever you need a news fix.

Anybody can make an account on Twitch. It’s a quick, simple process that takes only a few minutes. You (a super villain, in this hypothetical scenario) might be wondering what’s to stop somebody from naming an account after a popular streamer and, say, scamming a bunch of people. Not much, it turns out.

Over the course of the past couple years, people have impersonated popular streamers across various social media platforms, but there’s been a seeming uptick in the trend on Twitch in recent weeks. Among others, channels claiming to be hosted by CSGO star Oleksandr “S1mple” Kostyliev, popular YouTuber and streamer Jared “Anomaly” Simmons, and—in the wake of his departure to Mixer—ex-Twitch megastar Michael “Shroud” Grzesiek have repeatedly popped up, seemingly faster than the Twitch banhammer can reliably smack them into oblivion.

These impostor channels’ M.O. is usually similar, to the point that many of them could be coming from the same source: They pick a name not too far removed from a popular streamer like “Shroudleo” or “Anomalyuzp,” copy their avatar and profile page, and stream old recorded footage of that streamer. They overlay these bootleg streams with red and yellow-highlighted text that promises free in-game skins as part of a $US10,000 ($14,638) giveaway.

In chat, they say that to claim your prize, you need only click a link to a sketchy website (odds are, it’s a phishing site or something of that variety). Lines out, these scammers then wait for naive marks to bite.

This would be a non-issue if not for the number of viewers these streams have been pulling in. Over the weekend, a fake Shroud stream got over 4,000 concurrent viewers and became one of the top PlayerUnknown’s Battlegrounds streams on Twitch. Earlier today, a fake Anomaly stream had more than 5,000 concurrents in Twitch’s CSGO section.

A quick look at these streams’ chats, however, reveals a series of nonsense messages and generic excitement about winning prizes moving at an almost clockwork pace—meaning that many viewers are likely bots. Still, it’s enough to propel these streams to the top of popular games’ pages for a brief time, netting scams plenty of exposure. It doesn’t help that some, like a Shroud imitator that appeared this weekend, have remained un-banned for hours.

Streamers who’ve been impersonated are not pleased. “I see my live fake profiles on Twitch scamming people everyday, wtf?” Kostyliev said on Twitter last week. “Isn’t it your responsibility to protect your own people?”

“Someone is pretending to be me, and selling skins? What? How do they have so many viewers? …It’s gotta be banned by now. No way.”

“Please Twitch ban this scammer for using my username and VOD in order to scam people and steal their money,” Simmons said on Twitter earlier today, pointing to a specific impostor account. “This is not ok.”

Twitch wound up banning the account in question, only for a new one to pop up an hour later. “OK, he has a new [account],” said Simmons in response. “I guess I am the noobo.”

Last week, Mixer viewers brought one such Twitch stream to Grzesiek’s attention while he was streaming, and he was taken aback by it all. “Someone is pretending to be me, and selling skins?” he said. “What? How do they have so many viewers? …It’s gotta be banned by now. No way.”

Ultimately, he arrived at the conclusion that, while it sucks, it’s not his mess to try and clean up.

“It’s not really my fault,” he said during the stream. “I can’t do anything about it. It’s not in my control… They’ll get banned.”

He also expressed doubt as to whether these kinds of scams actually work.

“I don’t think anyone falls for that shit,” he said. “As fucked up as it is, I’m in the mentality of, if someone truly gets scammed by a name that’s not even me, then that’s just a lesson learned. I mean, we’ve all been scammed before… Takes a couple scams to get learned.”

Some, however, evidently have fallen for these streams, even expressing belief that they were the genuine article. “Well I tuned in to your stream to see what’s up,” said one fan to Grzesiek on Twitter. “I found out that the whole ‘10,000$’ giveaway was all fake. There were bots in your chat spamming the same message over and over again, the site was fake asf because you couldn’t do anything. I thought you were better.”

Kotaku reached out to Twitch to find out if it’s doing anything to more systematically eradicate this problem, but as of publishing, it had yet to reply. For now, it seems to be employing the old-fashioned whack-a-mole approach, even with viewers’ trust and streamers’ reputations hanging in the balance.