Destiny 2’s latest season features Saint-14, a legendary Titan whom players have been eager to meet. The only catch is that they’ll have to spend a lot of time doing boring stuff before they get to learn more about him.

Season of Dawn, which went live on December 10, begins with the return of Osiris, Destiny 2’s Warlock of mystery, who enlists your help to protect his time-travelling device called the Sundial. The Red Legion, a renegade army of hulking, militarist aliens from Destiny 2’s original campaign, are trying to take control of it in order to rewrite the forces of good out of the solar system’s history. More interestingly, the remnants of Perfect Paradox, a shotgun belonging to Osiris’ friend, Saint-14, have travelled through time via the device and landed in your lap, setting in motion Season of Dawn’s main quest line: reopening the investigation into Saint-14’s disappearance.

Despite a relationship and backstory that mostly exists off-screen, Osiris and Saint-14 are two of the game’s stronger characters, and Season of Dawn feels like it will have a satisfying, if brief, narrative arc because of it. That’s in stark contrast to Season of Undying, which focused on robotic villains following a script we’d seen several times before and culminating in a boss fight that old-school Destiny-heads have been through literally dozens of times before. We’re only in Season of Dawn’s first week and Bungie will be slowly adding new breadcrumb trails to follow as the months go on, but I’m already feeling much more invested in the game because of it. Osiris’ Sundial is located in a new part of Mercury you can only fast-travel to. (Screenshot: Kotaku, Destiny 2)

That’s a good thing, too, since the rest of Season of Dawn consists of granular improvements and tedious bounty grinding. Here are a few of the changes:

The new seasonal grind is where players’ mileage will vary the most. The quests with which Osiris starts you off require you to do things like kill 50 Red Legion enemies on the Tangled Shore to collect Sundial components, or kill 75 Vex to collect their cores and fluid. Osiris’ ability to craft powerful new tech out of alien corpses is magical, but the actual act of harvesting them is not.

Season of Dawn’s main new activity is a six-player boss rush that takes place in the Sundial itself. In one portion, players need to stand on a platform while fighting off Cabal and occasionally meleeing shielded Psyons that halt their progress. In another, Vex Gate Lords drop arc charges that are used to blow up Cabal machinery. It’s a lot like Season of Opulance’s Menagerie, but with scenes of Mercury past, present, and future substituted for the Leviathan warship.

The combination of light puzzles and varied environments that take you from assuming a defensive posture to waging an all-out assault is fun, and everything moves at a good clip. None of the individual parts overstay their welcome, even after you’ve run through them five times in a row.

Unlike previous activities, the new seasonal guns don’t automatically drop after it’s complete. Instead, you choose the one you want from a pool dictated by a system of Obelisks newly activated throughout the solar system. The first one you can start levelling up is on the Tangled Shore, and adds the auto-rifle Steelfeather Repeater and sidearm Breachlight to the pool.

New Obelisks will become active as the season goes on, and players can level them up by completing Obelisk specific bounties, thereby expanding the loot pool available to them after completing a Sundial run. 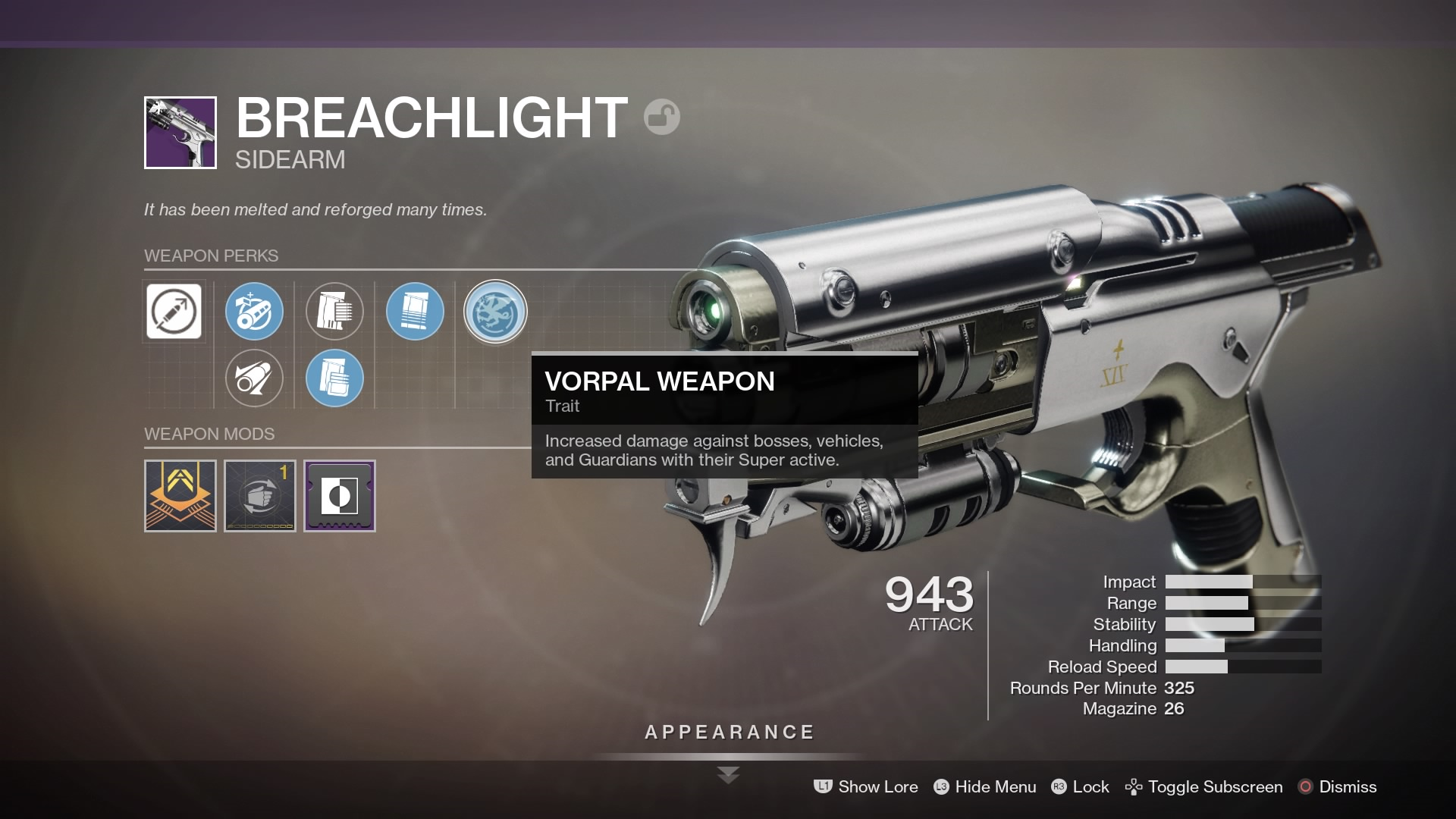 I’m already in love with my Breachlight. (Screenshot: Kotaku, Destiny 2) 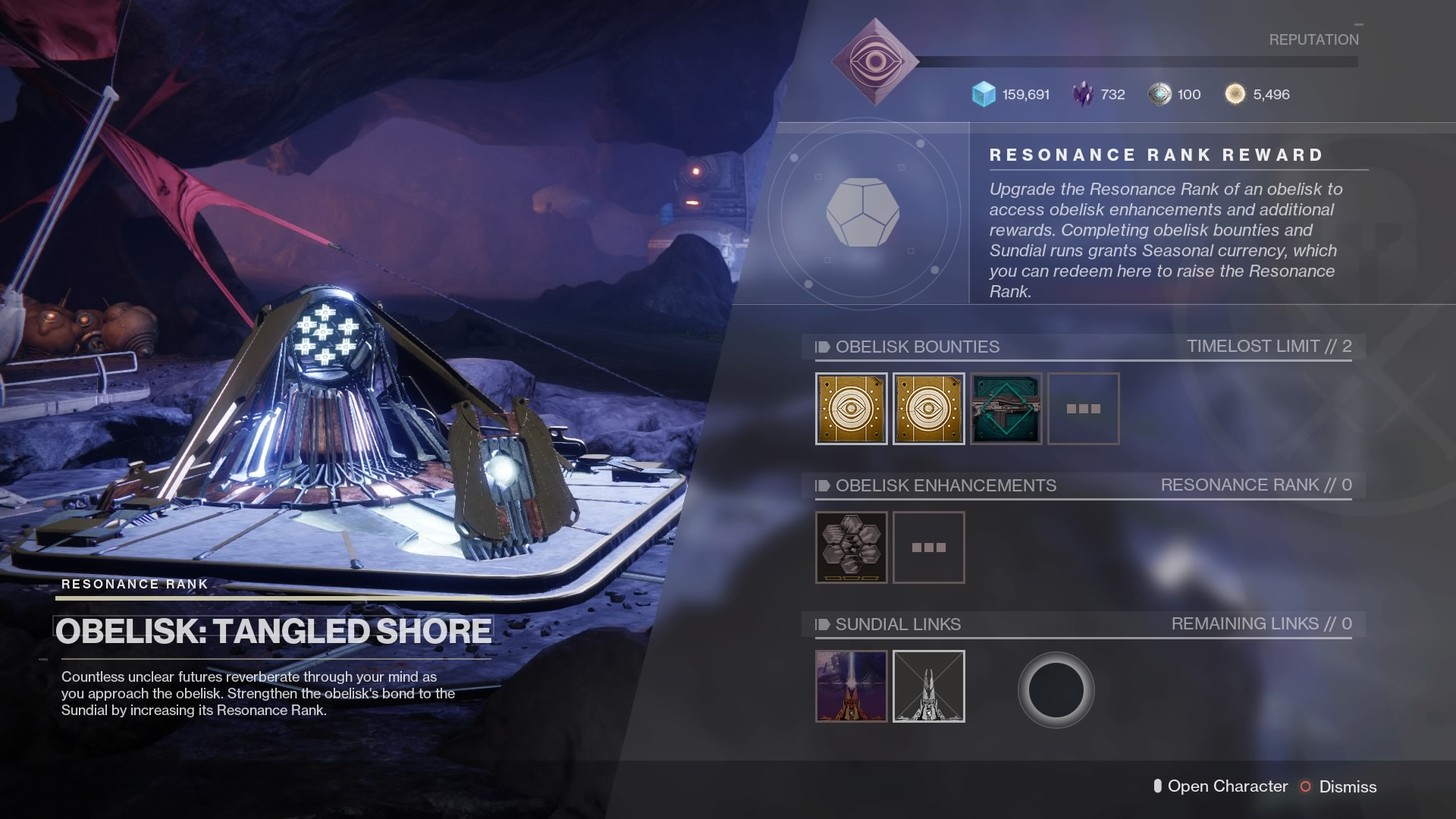 While the Sundial itself is more or less like a remix of Menagerie, and not the new raid or dungeon some players were hoping for, the way it handles loot is refreshing. For instance, I’m really in love with the Breachlight. Levelling up the Tangled Shore Obelisk as the weeks go on will unlock new alternate perks with which it can drop. Rather than being at the mercy of RNG, I can simply select it at the end of each Sundial run while I hunt for my ideal perk rolls. In addition to regular bounties, the Obelisks also have weapon frames you can grind as an alternate path toward farming the guns you want.

Levelling up Obelisks is also a great reason to return to old locations and work on planet-specific bounties while you’re there. This, in turn, helps you grind through the new season pass faster. A standard trip to the Mars Obelisk might consist of visiting Ana Bray for some local bounties, getting a few from the Obelisk itself, and finally playing through a few rounds of Escalation Protocol to complete them. In addition to raising my Obelisk rank and completing another level of the season bounty, I also might end up with some Escalation Protocol gear I missed back when it first got added to the game.

Effectively multi-tasking is one of Destiny 2’s great joys, and Season of Dawn offers a new way to do that by bringing old activities and locations back into the new grind. There’s no quick way to get in and get the most out of Destiny 2 in the latest season, but for those willing to stick around for its low-key, slow-burn world building, Season of Dawn has sanded down some of the rough edges around the new approach to quarterly updates that Shadowkeep kicked off.