I have so many fond memories of visiting them in my childhood, from playing Bubble Bobble and launching hundreds of bubbles to a World Wrestling Federation game whose title I can’t recall even though I can see it clearly in my head like it was yesterday. I went to a whole lot of arcades in the two years I lived in Korea, and still remember the ones in the subway stations, the ones that smelled of cigarettes and grilled BBQ.

The very first arcade game I recall seeing is the original Mario Brothers alongside Kung Fu. A few years later, I remember kids getting really intense about their Street Fighter II creds and people asking if anyone knew how to do Guile’s “handcuff.” I still remember feeling shocked when I first saw the graphics and brutality of Mortal Kombat. “Get over here!”

But there was one game that stuck out for me. Teenage Mutant Ninja Turtles quickly became one of my favourite arcade games because it brought one of my favourite cartoons to life. Developed by Konami in 1989, it was a side scrolling beat-em-up with nearly identical graphics to the cartoon. On top of that, you could play as all four turtles simultaneously. Fighting the Foot Clan had never been so much fun. 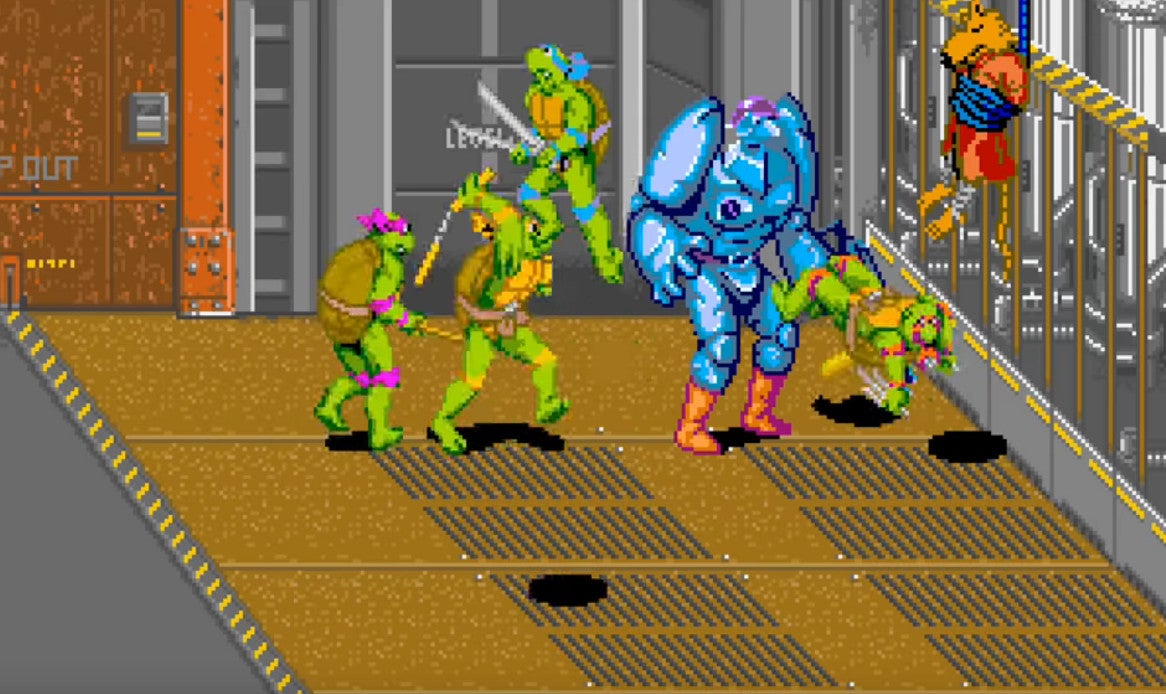 On paper, the TMNT franchise is a strange hybrid, mixing pop culture, mutated turtles training to be ninjas, and weird science fiction elements with Krang and Dimension X, all set in a contemporary Manhattan (and its sewers). What stands out most for me wasn’t the bodacious catch phrases or the stylish ninja action, as cool as both were. It was the teamwork between the four teenage brothers, trained by their rat sensei, Splinter. Often that meant overcoming internal and external strife, with each sibling bringing something to the table.

The arcade version of the game was the first to capture the spirit of that teamwork in the gameplay. From the opening screen, it was amazing seeing the theme song playing in the opening screen: “Teenage Mutant Ninja Turtles, heroes in a half-shell, turtle power!” The Turtles jumped without hesitation into a burning building to save their friend, reporter April O’ Neil. 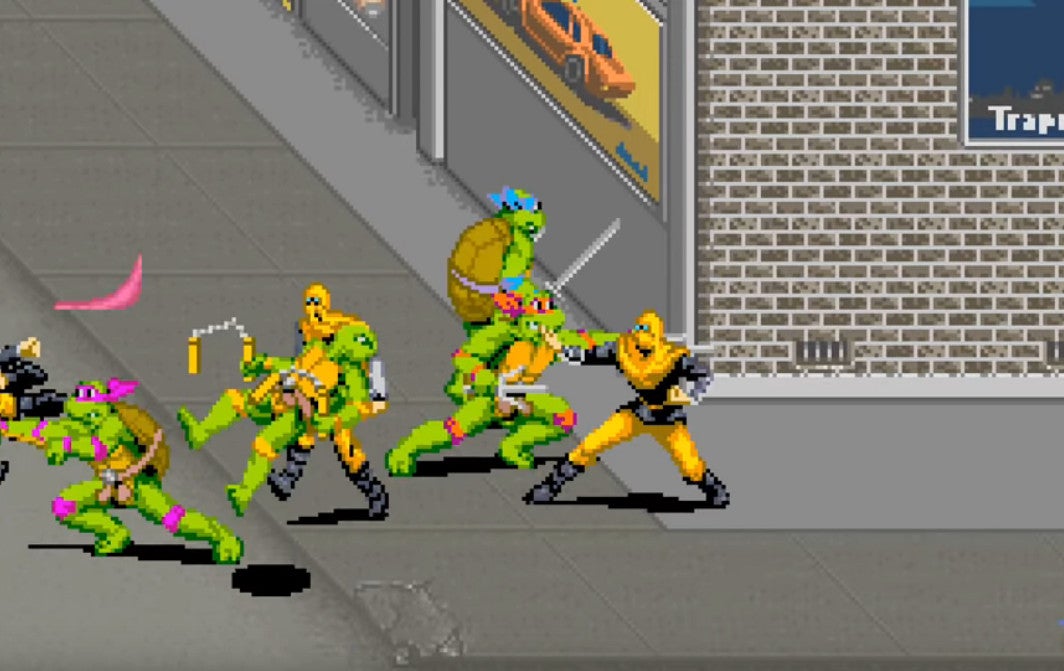 The graphics were so good, it felt like you were playing the cartoons. Seriously, the animation was incredible. Hurtling one of the Foot soldiers against the wall, only to see them flattened by the impact, was very satisfying. The action is unrelenting in this fast-paced brawler. The controls were intuitive, with just two buttons: one for attack and the other for jumping. Combining the buttons could lead to special attacks as well as aerial strikes. The Turtles were very manoeuvrable, moving like ninjas as they fought off legions of Foot Clan soldiers. The Foot Clan soldiers are colour-coded to indicate their battle style: purple for hand-to-hand combat, yellow for boomerangs, etc. The boss battles can be brutal with Bebop, Rocksteady, General Traag, and other familiar enemies from the show doing their best to ward off the Turtles. 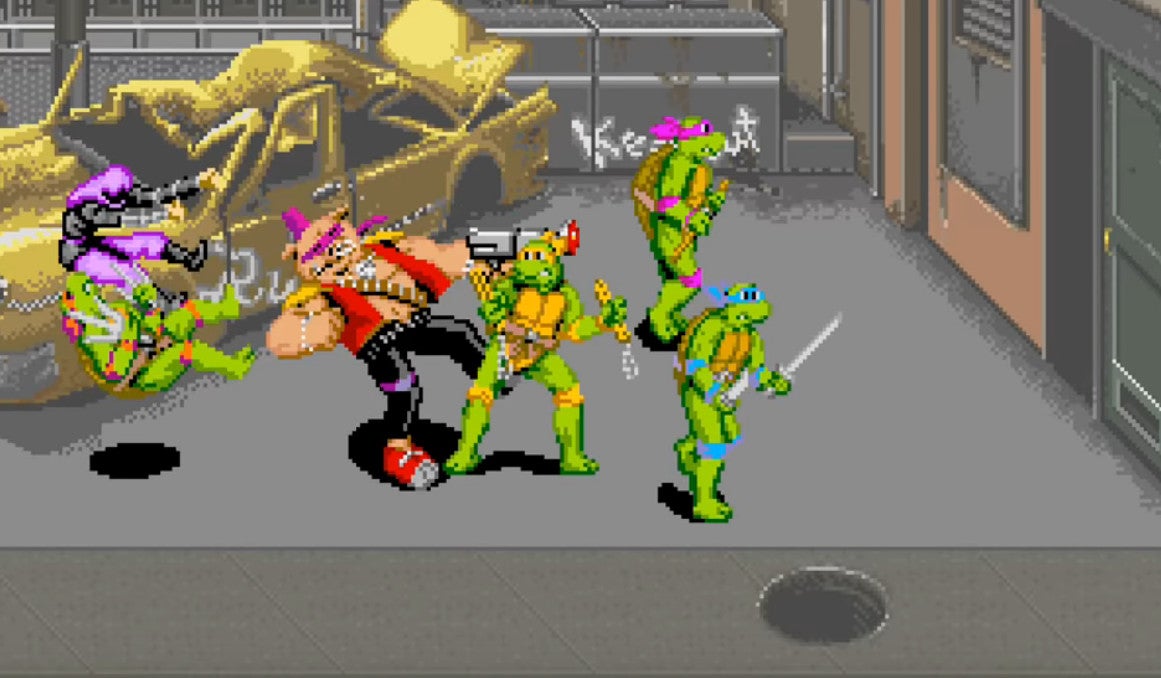 I never got to finish the game when I was younger, though I watched other kids get through huge chunks of it. That was because at most, I’d have a dollar or two to spend at the arcade. By nature of the way these games were designed to gobble up quarters, it meant I’d be lucky just to get through a few levels. As the graphics in arcades were so much better than those of consoles, visiting them always felt like I was going to a futuristic hub with portals to all these different worlds. It was a fun way of escaping parts of my own life. I think the appeal of the Turtles was they always have to stay in the shadows, unable to come out in the open, which was something I could relate to.

Recently, thanks in large part to someone I know having the arcade cabinet, I played through the game with two friends, and it was a blast. Similar to the Turtles, we coordinated our attacks, ganging up on the tougher enemies. I played as Donatello, who is slower, but has the longest reach. Leonardo is the most balanced, while Raphael is the quickest, but also the weakest. 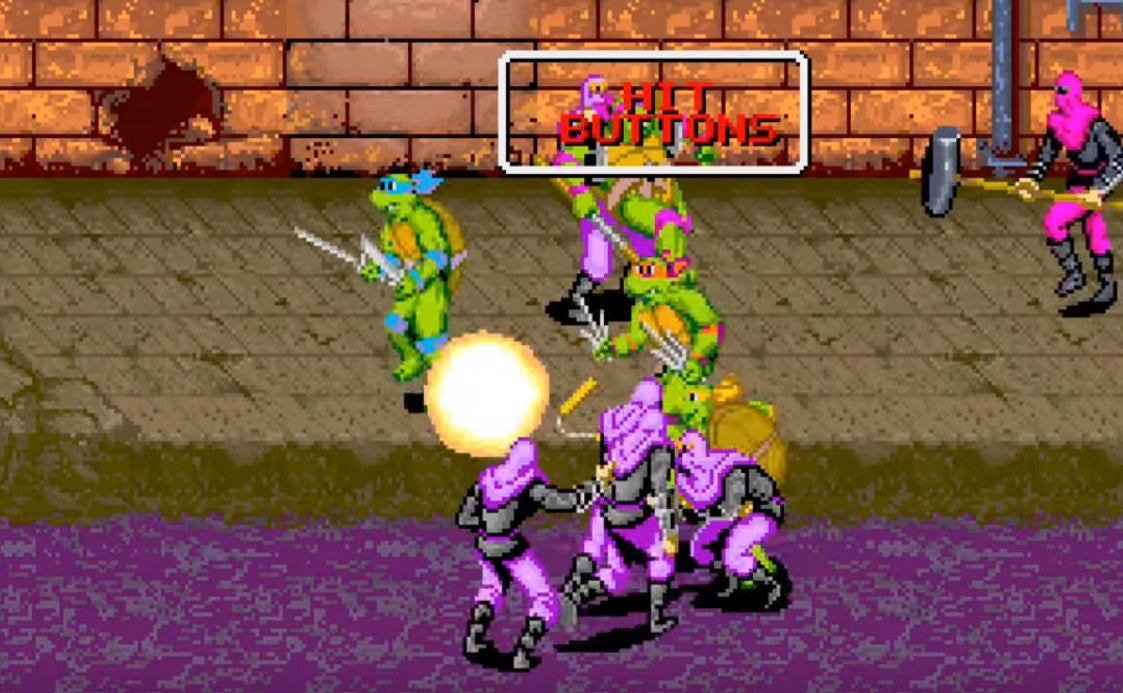 It was all the little details that really stuck out. Like how in some scenes, a Foot Clan member sticks his head out from around the corner, laughs to himself, then throws a stick of dynamite. The Turtles each have unique attack animations, and the enemies all have corresponding unique animations for getting hit by these different blows. I love how the Turtles shout “Pizza time!” when pizzas are nearby and “Cowabunga!” when you continue after a death. The music is a nice blend of the original theme song and new tracks composed for the game. 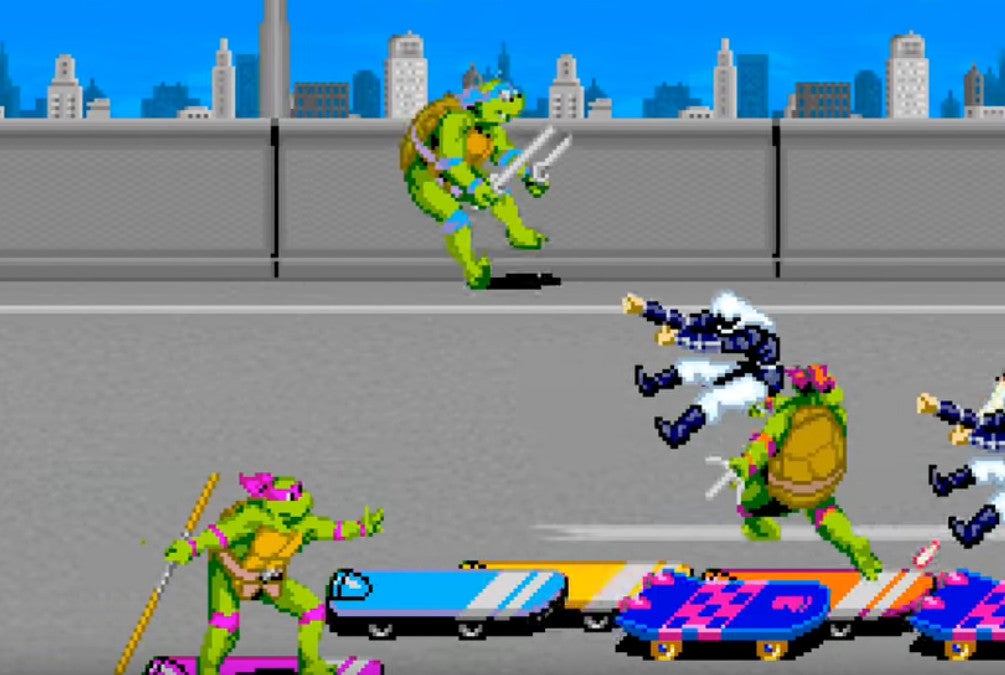 While most of the levels have you travelling by foot, about halfway through, the Turtles jump on skateboards and fight off Foot Clan soldiers on rocket skateboards of their own. I like how Bebop has a ray gun and Baxter Stockman deploys Mousers against you. Krang can’t help but boast, “I’m invincible!” while he fires laser beams from his eyes. Shredder uses his ninja skills to make clones of himself and fire lightning bolts out of his hands.

Armed this time with unlimited continues, it was great to finally get to the Technodrome and take out Krang. But it was also fun to get to re-experience the game with players next to me. We’d bark orders at each other: Take care of that soldier. Watch out for that guy with the manhole cover. That’s my pizza! Stop dropping into the sewer! 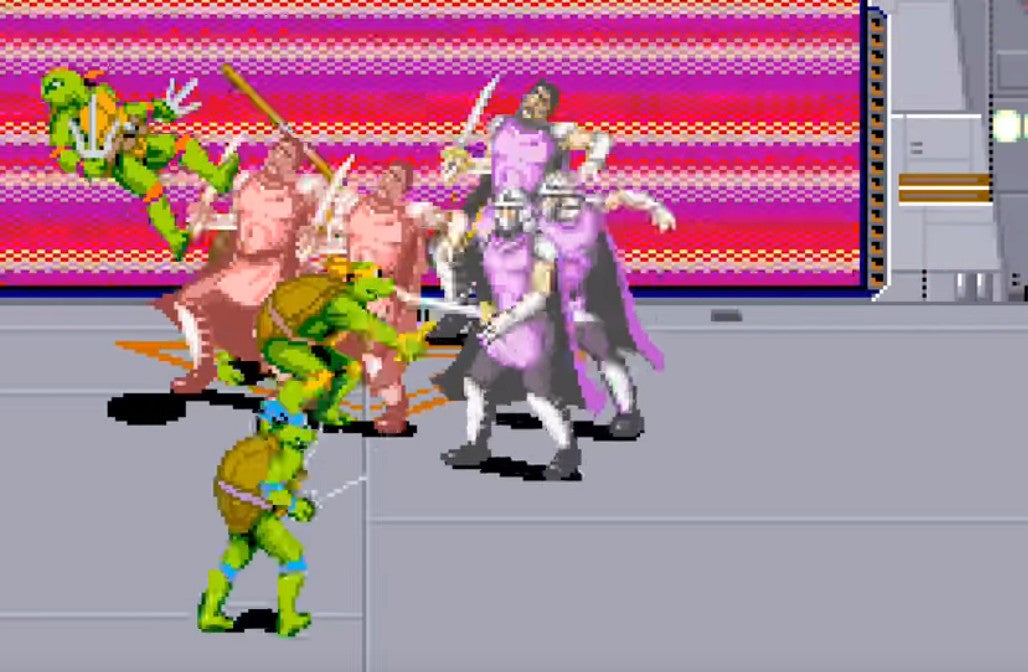 When we finished Shredder off, it felt good. Although there aren’t any Pizza Huts around me, I went with my friends to grab some deep-dish pizza right afterwards. We shared favourite arcade game memories and wished arcades hadn’t mostly gone away. Then we went back and played through TMNT again. It was rad.