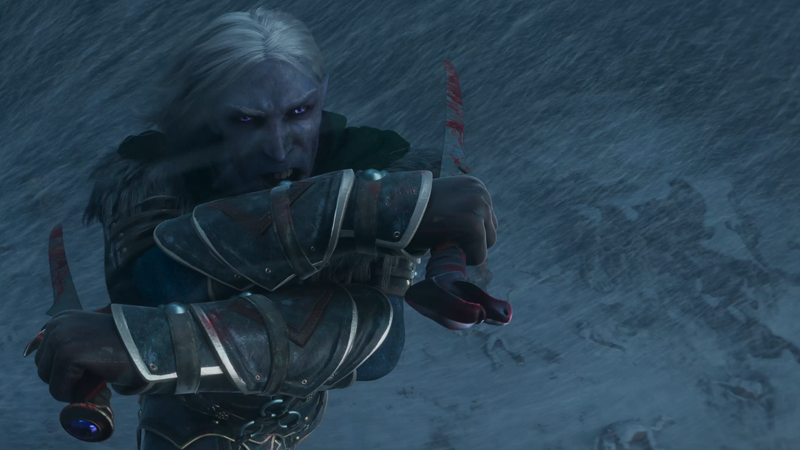 Drizzt slices his way through the frozen tundra—and he won’t be alone. (Image: Wizards of the Coast/Tuque Games)

Dungeons & Dragons has a long and storied history of video games set in the vast worlds of the Forgotten Realms. But there are few that inspire a longing fervour quite like the fans of Baldur’s Gate: Dark Alliance and its sequel. Now, after 15 years away, the series is being revived—and Gizmodo spoke to the people behind its return to find out why.

Just announced at the Game Awards, taking place right now at the Microsoft Theatre in Los Angeles, Dungeons & Dragons: Dark Alliance is being published by D&D masters Wizards of the Coast, and developed by Montreal-based Tuque Games.

A reboot of the beloved hack-and-slack cooperative RPGs developed by Snowblind Studios and Black Isle for the Playstation 2, Xbox, and Gamecube, the new Dark Alliance is similar in gameplay.

You’ll still team up with up to three other friends to fight monsters, collect loot, and navigate various locals in the hunt for more experience, gold, and gear than you can shake a kobold at. But in dropping Baldur’s Gate from the title, it will tell a brand new story with different characters, unconnected from the tale weaves across the first two games in the series.

And speaking of those different characters…as you can see in the cinematic reveal trailer above, instead of playing originally created characters this time, gamers will inhabit one of four famous figures from Forgotten Realms lore. The player characters include the legendary Drow Elf Fighter/Ranger Drizzt Do’Urden, alongside three of his allies from the Companions of the Hall: archer Cattie-Brie, Dwarven warrior Bruenor Battlehammer, or Wulfgar the Barbarian.

Although little is known about the story of Dark Alliance yet, it will transport Drizzt and his companions away from the city of Baldur’s Gate and instead to another iconic D&D local: the frigid lands of Icewind Dale.

To find out more about what fans of the Forgotten Realms lore can expect out of the new Dark Alliance, we spoke via email to Kevin Neibert, Lead Game Designer at Tuque Games ahead of the game’s reveal. Check out the interview below!

Gizmodo: Why was now the right time to return to Dark Alliance, both the name and this style of game within the D&D universe?

Kevin Neibert: Dungeons & Dragons is bigger than it has ever been. It has attracted so many new players and fans through livestreams, books, and huge references in pop culture, like with Stranger Things.

With so many new fans coming to D&D for the first time or for existing fans looking for new ways to engage with the franchise, we wanted to create something that speaks to a new generation, but also pays homage to the great D&D games of the past.

Neibert: I grew up reading R.A. Salvatore’s Drizzt novels and the character always resonated with me. During my own D&D campaigns, I always played ranger, so the ultimate ranger in Drizzt always held an appeal. When we started playing the Legend of Drizzt board game at Tuque, it really just clicked that we wanted to feature this iconic character and his legendary companions because cooperation and companionship are really at the heart of the game.

Gizmodo: What do you think it is about Drizzt that still makes him compelling after all these years?

Neibert: As a drow, Drizzt can live for a very long time, which means R.A. Salvatore has been able to create so many memorable stories with him as a main character and he’s developed a lot over the years. Combine that with a rotating cast of companions, it creates really interesting new group dynamics to explore.

Neibert: We don’t want to comment yet on which characters from the Companions of the Hall make an appearance beyond Catti-Brie, Wulfgar, and Bruenor. 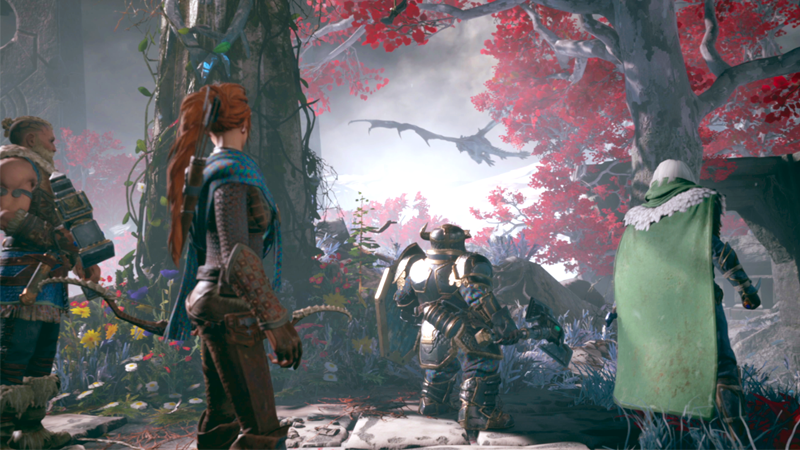 Drizzt and his companions chase after a dragon in a brief snippet of gameplay shown at the end of Dark Alliance’s trailer. (Image: Wizards of the Coast/Tuque Games)

Gizmodo: You’re also pulling the series away from Baldur’s Gate itself and into another iconic locale, Icewind Dale. Tell me about that choice and what it means for you as storytellers.

Neibert: It moves the action to a part of the Forgotten Realms that is very harsh, violent, and unforgivable. It allows us to break out of the shadow of the old games and define a new beginning for Dark Alliance.

Gizmodo: You’re drawing on familiar characters and locales here so far—what can you tell us about the quest that Drizzt and his friends will go on in the new Dark Alliance? Is it likewise inspired by what came before, or a new narrative made just for the game?

Neibert: Early on in the concept phase of the game, we brought in R.A. Salvatore to discuss potential story ideas and places we could take the characters that differ from what has come before. Obviously, we’re inspired by the 30-plus books and D&D adventures, but this quest is entirely new and unconnected to anything that exists.

Gizmodo: Invoking the name of such a beloved slice of the D&D world carries a lot of expectations, but at the same time, the loot-driven ARPG space Dark Alliance played in has evolved so much since the series came to a close. What’s it been like trying to balance living up to fans memories of the sequels while also making this new entry feel like it’s earned its 15 years away?

Neibert: Our game is a standalone, it harkens back to the original series in the way it prioritises companionship and cooperation, but we’re much more action-heavy, but we also want to capture the accessibility that Dark Alliance brought to the table. We look at the other games that have filled the void since D&D’s last ARPG and feel like it’s a good time to step back into the conversation and show why D&D has remained relevant for the past 45 years.