Destiny 2 players have spent the last week trying to crack a complex maze and earlier this morning the final pieces fell into place. Unfortunately, the reward waiting for them, an exotic weapon already publicized by Bungie, wasn’t what many had been hoping for.

It all began when Bungie dropped a mysterious new quest into the game last Tuesday called “Exploring the Corridors Of Time.” By the end of the week, thousands of players were sharing screenshots of symbols unique to their playthroughs and entering them into a massive spreadsheet in an effort to find a solution to the maze that would lead players to the end.

This morning around 4:00 a.m. they finally discovered it:

The scale of this Corridors Of Time puzzle in many ways dwarfs that of previous Destiny mysteries, including 2016’s notoriously complicated Outbreak Prime quest. Every Destiny 2 player had a potential piece of this puzzle in the form of a hexagonal grid of symbols that displayed in the Timelost Vault at the end of their particular playthrough of the Corridors of Time. As a result, programs and websites were created to collect every player’s contribution and help arrange it into a single, coherent map. 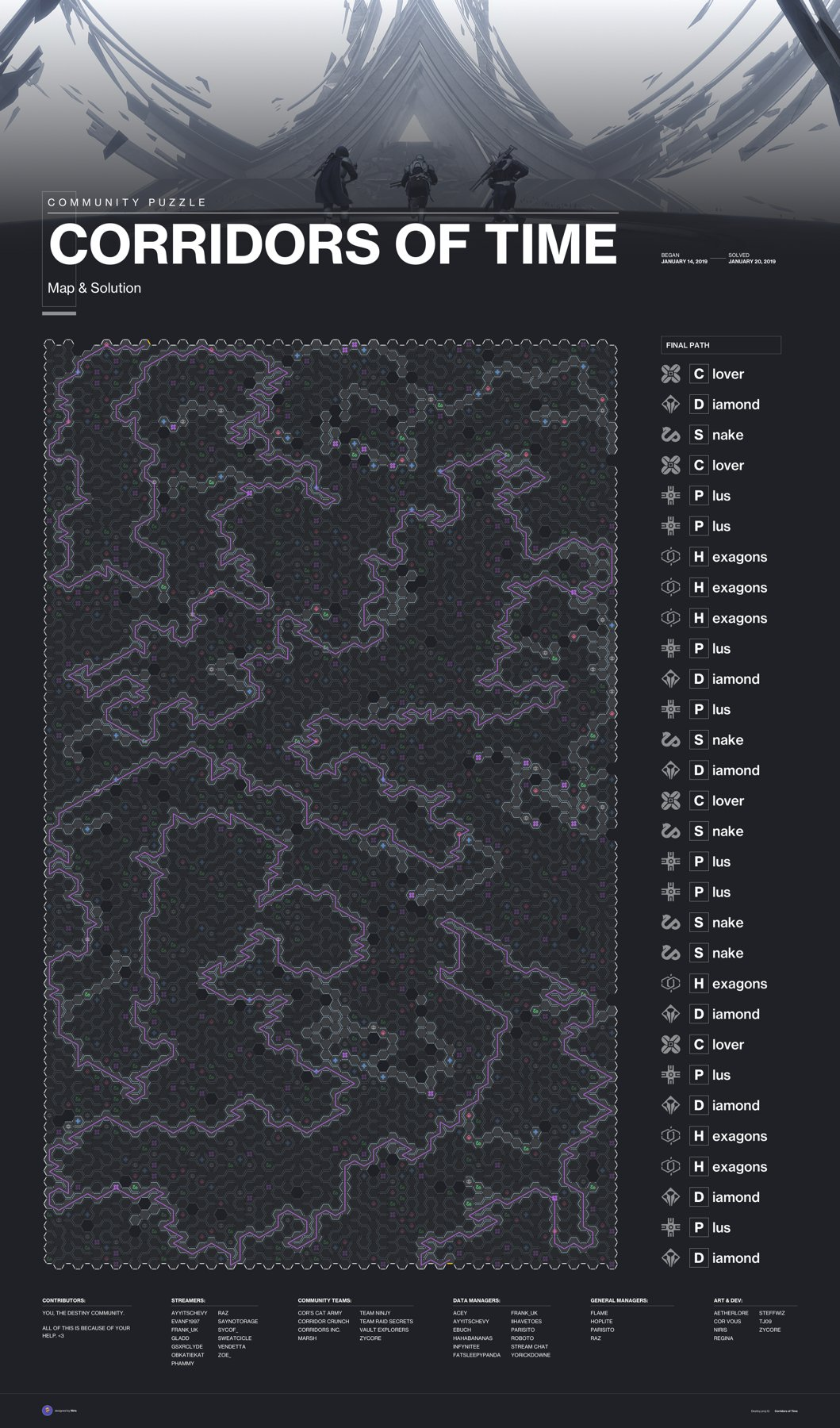 Popular Destiny 2 streamers who were helping to lead the effort barely slept and publicized bounties for specific pieces of the puzzle. While there wasn’t a ton for individual players to do in the actual game during this week-long campaign, the community-wide effort taking place across Discords, subreddits, and Twitch streams turned it into a huge event that anyone could participate in. That’s why the reward, an exotic fusion rifle called Bastion, struck many players, including myself, as underwhelming.

Once players navigate through the Corridors of Time rooms in the order of the above symbols they come to a grave. If you plan on completing the quest yourself I suggest you do so before reading on if you want to avoid spoilers.

The grave, as many had speculated, belongs to the player. When they arrive Saint-14 delivers a stirring eulogy for their guardian and they then acquire a chromatic weapon core which initiates the final leg of the quest that’s fairly straightforward if a bit tedious to complete. While the idea of using the maze’s time-travelling properties to have players confront their character’s own mortality is a great narrative twist, and the kind I’d love to see more of, the knowledge that it’s ultimately in the service of, an exotic weapon players already knew about, is a bit deflating.

Bastion was revealed in a developer livestream back on December 4, and the game’s Season of Dawn road map had it scheduled to arrive on January 28. It’s now unclear if the reward for solving the Corridors of Time puzzle when players did is simply getting the gun early or if Bungie had originally intended for the solution to the puzzle to take longer and come sometime after next week’s update. 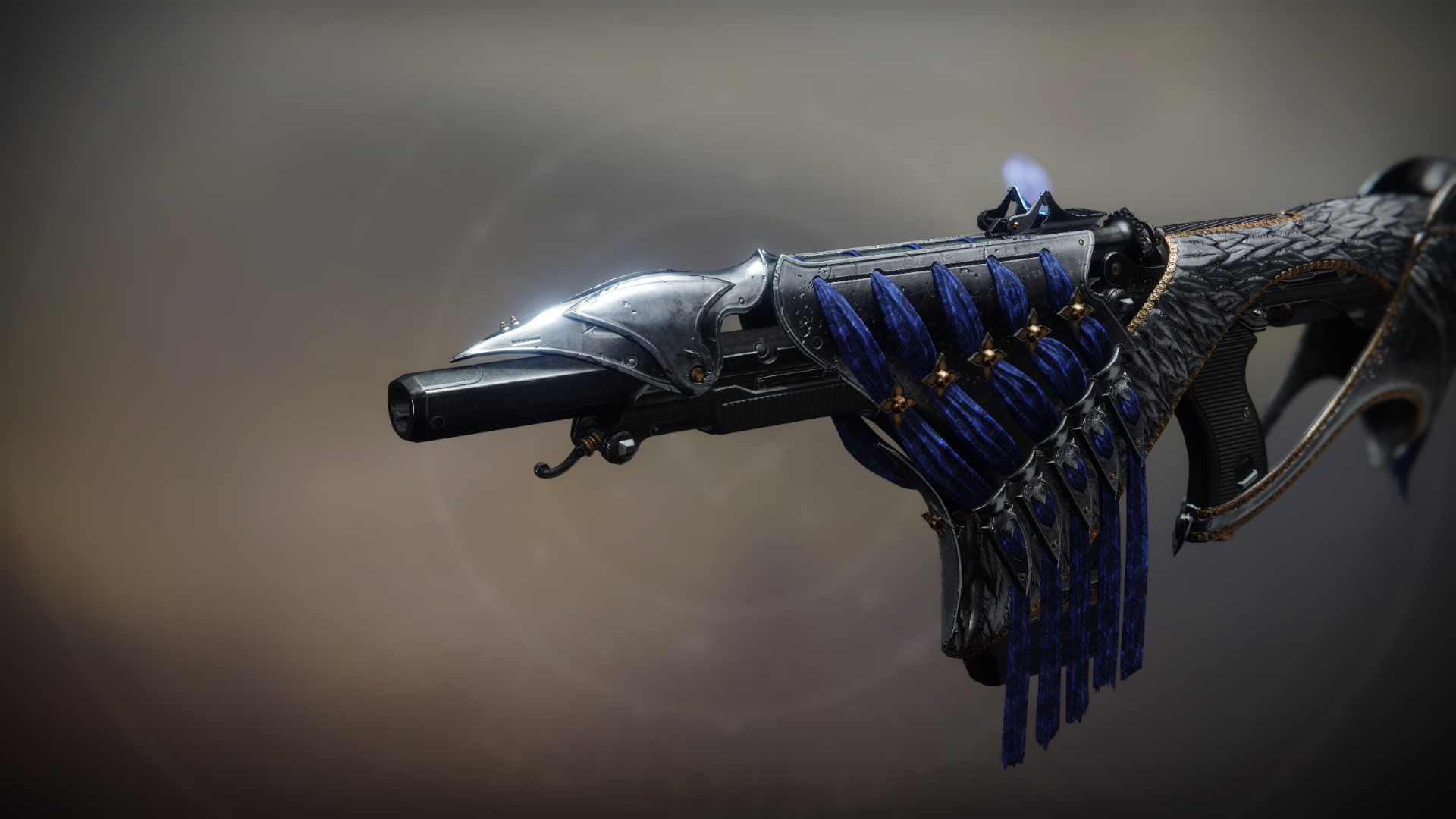 Some players were hoping the reward for completing the puzzle might be the return of another exotic weapon from the first Destiny. Others thought it might be a new exotic sword given the one that resting atop the tomb in the Timelost Vault. While Bastion doesn’t feel like an exotic worthy of the week-long community effort that went into getting it, it probably would have gone over better if players hadn’t already been expecting it later this month.

Still, that doesn’t take away from what a fun and wild ride seeing Destiny 2 players map the Corridors of Time was. In this case, the real treasure really was the friends we made along the way.