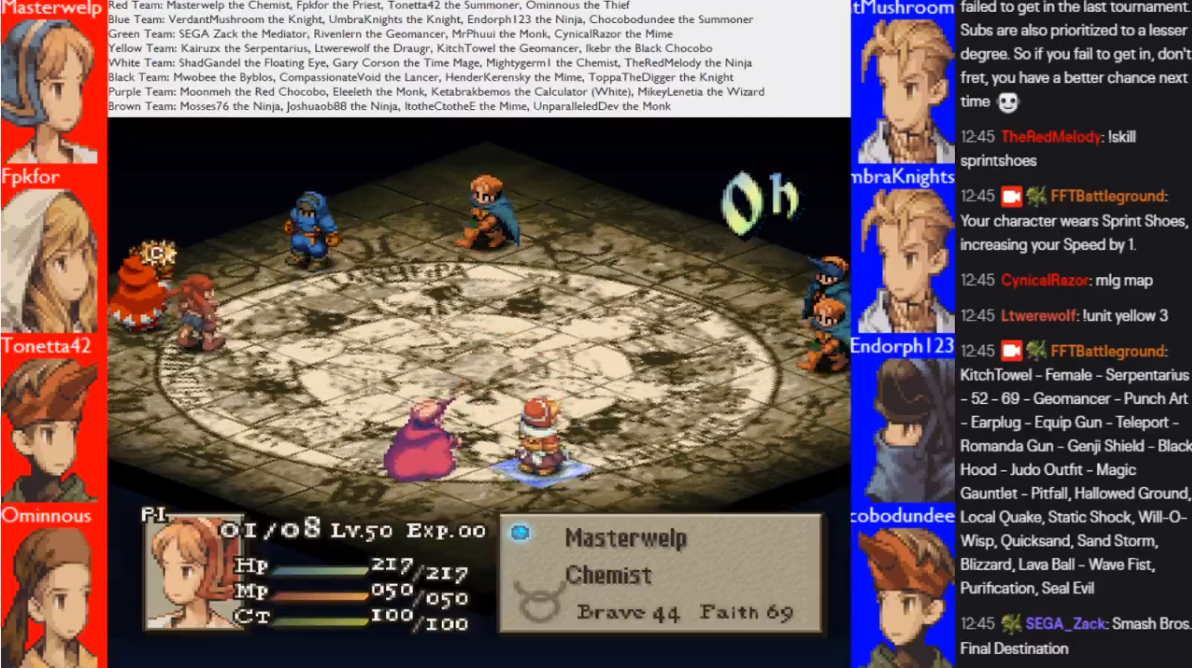 FFT Battleground is a Final Fantasy Tactics Twitch stream that lets you place bets on competing teams of randomised characters, all controlled by AI. The bets are based on fake money, which is good, because if they weren’t, there’s a non-zero chance I might have done some real damage to my bank account by now.

Spotted by PCGamesN earlier today, the program behind the Twitch stream runs mini tournaments using a modded version of the PS1 strategy game where all of the characters, skills, items, and maps are unlocked. It’s similar to Salty’s Dream Cast Casino, a 2013 program that generates endless fights out of randomised characters created using the freeware fighting game engine M.U.G.E.N. for internet viewers to gamble on. Everyone in the chat is assigned some starting GP (gold points) they can wager by typing “!bet” along with the amount, and team they’re rooting for, into the chat.

At the start, eight teams of four fighters each are generated at random, with powerful items and skills weighted so they appear less frequently. Then the teams are seeded into a bracket to duke it out until only one is left standing. They then face-off against the previous tournament’s champions, after which the entire thing starts all over again.

There’s no reward beyond bragging rights and getting to see your name climb up the leaderboard, but somehow that’s been enough, at least for me and the 150-something other people tuned into the stream at any given time. Watching FFT Battleground is like seeing a fever dream version of Final Fantasy Tactics where weirdly tinted sprites fight for their lives using busted movesets in ways that are sometimes sublime, sometimes trainwrecks.

In one match a Geomancer struck a Knight on his own team with a sword that happened to be the same element as the Knight’s armour, healing him for over 200 points and saving his life. In another, a Lancer used Jump on its opponent, only for a Mime who was also on its team to copy the same move on its turn, brutally murdering a comrade. That Mime ended up single-handedly throwing the round, a championship match no less, losing a lot of people a lot of money.

That audience participation is what makes the stream so much fun. The simple act of betting a few hundred made-up gold points instantly imbues the AI matches with tons more drama as people hang onto every devastating Holy Sword attack or unlikely status ailment, desperately hoping for matches to unfold in their favour. Through this process, teams even begin to take on mini-personalities of their own, like the green squad of a Priest, Ninja, Knight, and Lancer who seemed destined for glory only to be struck down by a series of critical hits by a Behemoth.

The stream is still in beta and the creators say they’re looking to add new features in the future. Currently, matches move a little too fast. While it means there’s always plenty of action, it’s also difficult to see exactly what’s going on. Similarly, there’s no easy way to get a good grasp of each team composition prior to the start of a new tournament. As a result, most people are betting blind or based on a few things like a squad’s job classes or win streak, rather than their overall stats and build.

Still, it’s the most fun I’ve had with Final Fantasy Tactics since the game was remade for PSP in 2007. At least until it finally gets ported to PC.