For Some X-Men, Death Still Matters

In the penultimate issue of Jonathan Hickman, Pepe Larraz, and Marte Gracia’s House of X, Charles Xavier’s grand plan to ensure that no X-Men ever truly die again is revealed. In the months since then, the concept of death has become something different for the world’s population of mutants. People carrying x-genes still face danger at every turn, even when they believe themselves to be relatively safe while living on the island nation of Krakoa.

But even when X-Men fall in battle, there are now protocols in place to bring them back to life, no matter the ridiculously devastating circumstances, because Charles Xavier”assisted by a key team of mutants with restorative powers”has devised a way to create backups of any person’s very “essence.” Strictly from a strategic point of view, this gives the X-Men a key advantage in their ongoing crusade to establish a mutant homeland. Case in point: Charles Xavier’s own resurrection after he was recently assassinated.

From a narrative perspective, the X-Men’s new failsafe strategy has also opened up the possibility for a number of characters from the series’ pastÂ to be brought back into the fold in refreshing ways. For characters like Rahne Sinclair of The New Mutants, reintroduction to the world of the living is a relatively smooth process because, chronologically speaking, she hasn’t really been away all that long. Traumatic as their deaths are, it’s possible for them at the very least pick up rather close to where they left out.

But for characters like one of the central heroes of this week’s X-Men (from Hickman, R.B. Silva, Marte Gracia, and Clayton Cowles), things are a bit more complicated. While the X-Men can give them a new life, there’s no way for them to give back all the time that’s been lost.

In Generation X #70, the X-Men Synch met his untimely end at the hands of Emma Frost’s sister Adrienne. She’d planted a number of bombs around Emma’s mutant academy in Massachusetts in order to sow chaos among the school’s mixed population of human and mutant students. Despite being a powerful mutant when physically near other mutants whose powers he can “sync” with and replicate, Synch was too far away from his fellow X-Men at the moment one of Adrienne’s bombs exploded. He died, and the character’s been largely missing from Marvel’s comics since aside from a brief reappearance during the X Necrosha event.

Following the events of House of X, though, Synch’s been counted among the resurrected mutants living on Krakoa, and in this week’s X-Men, he’s given a spot on a small, special team of heroes tapped to embark on an important recon mission.

When Wolverine failed to capture Serafina of the Children of the Vault while she was breaking back into the vault to rejoin her siblings, the rest of the X-Men deduced that only a select few of them could even hope to follow the woman inside and survive. Time flows differently within the Vault, and most of the X-Men would likely die of old age before they ever hoped to locate Serafina. Yet the nature of Wolverine (no longer going by X-23), Darwin, and Synch’s powers means the three of them can theoretically survive any environment indefinitely with little in the way of support from the outside. 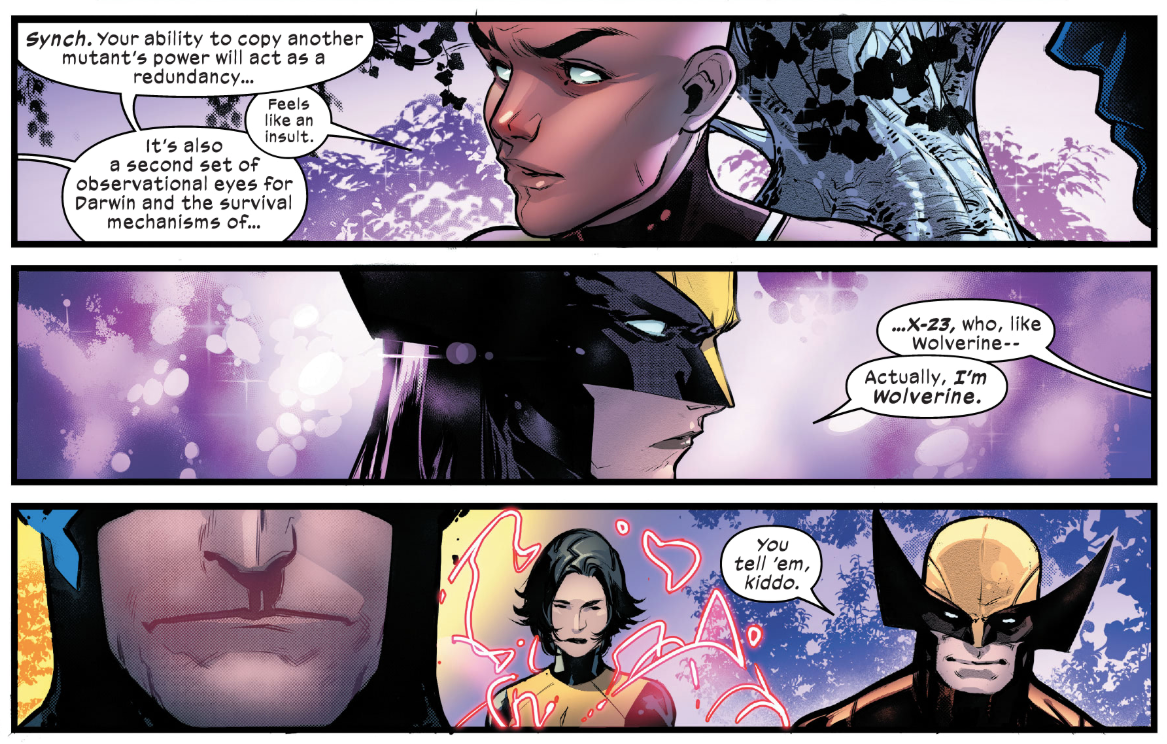 Synch, Wolverine, Cyclops, Armour, and the other Wolverine discussing the mission at hand. (Image: Marvel)

Being functionally immortal all on their own, Wolverine and Darwin have (generally) been able to live their lives normally, and as dangerous and unpleasant as their mission is, it’s the sort of thing one becomes accustomed to when one is an X-Men. For his part, Synch’s more than game to play hero as well and he’s excited to be back in the field, but a psychological profile included in this issue explains that things aren’t quite what they seem with Synch.

Though all appears to be fine with Synch physically, Dr. Cecelia Reyes’ report on the mutant details how, psychologically, he’s struggling to adjust to his new reality in the present, a place he’s got no real connection to or context for. Jean Grey treats life and death like a game of existential musical chairs, and for her and others like her resurrections are no big deal. It’s only been so long since they were dead”this being one of the reasons that characters’ deaths tend to have less emotional resonance every time they happen.

Synch hasn’t spent most of his life living and dying and living again. Thus Reyes believes what is hitting him hardest is to see the ways in which his contemporaries left him behind and have often gone on to deal with their own brushes with death that they’ve been able to overcome. Synch’s entire power set revolves around being able to do what other people do (and better). So coming back this way has to feel bittersweet”not just because it’s taken his friends this long to even try a resurrection, but because making up for all that lost time is the sort of feat that not even he could manage. 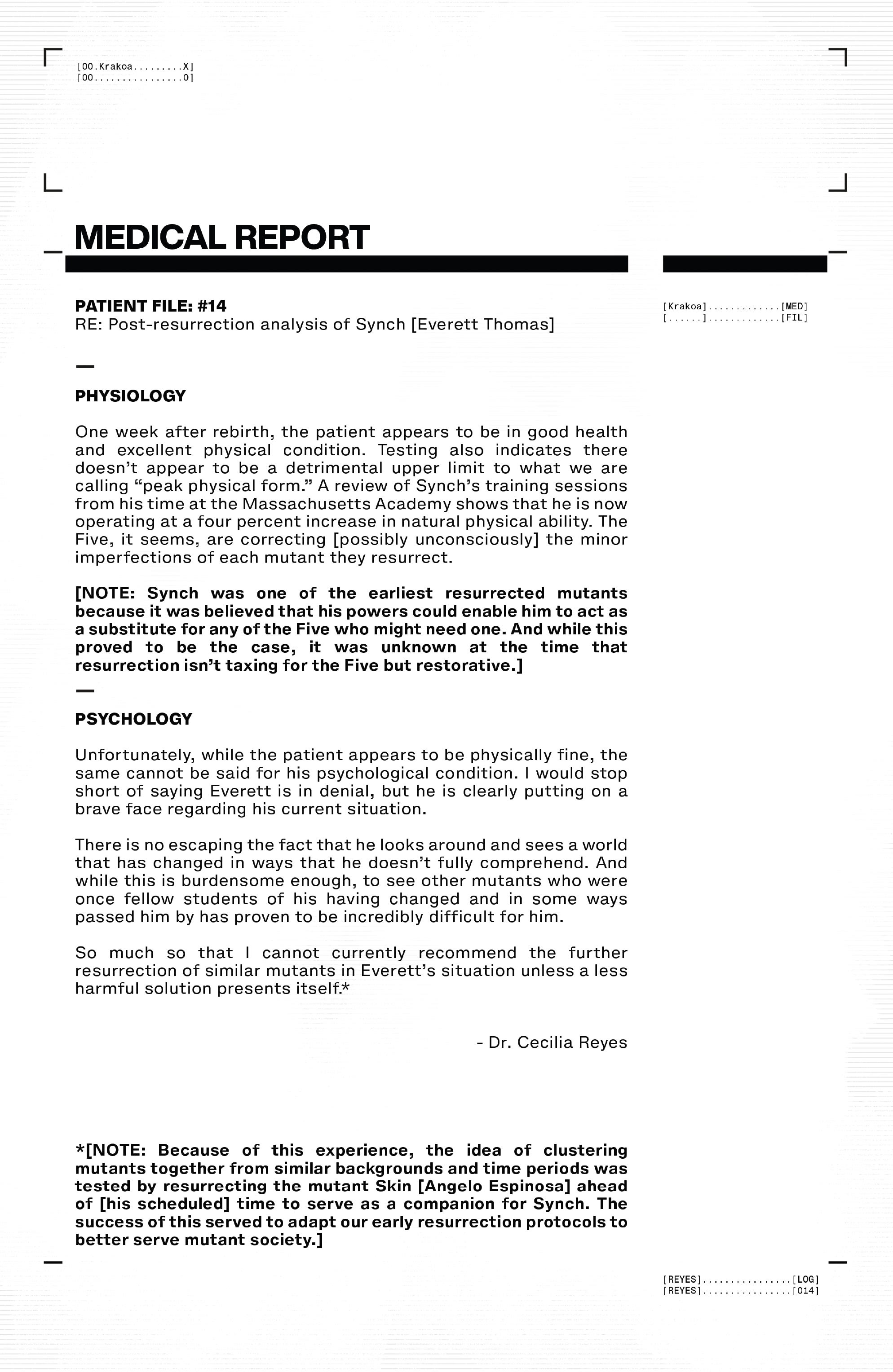 It’s the seemingly small details like this that make Dawn of X feel distinctly refreshing and fascinating. Because maybe Xavier’s vision for a shining future that’s hospitable to mutants is a dream that’s doomed to fail (or at the very least, not develop in a way that anyone sees coming). Resurrection isn’t necessarily the miracle it appears to be on the surface. People can still be left behind, or at least feel like they are. Synch might feel like he needs to play catchup and have a lifetime of experiences that put him on the same page as his X-peers, and travelling into the Vault could very well give him just that.

Whether experiences inside that strange place end up being good for him is the big question now. If you’ve been dead so long can you ever make up all the lost time?