Journey To The Savage Planet Is Fun, But Please Stop Using That Word

Journey to the Savage Planet is the first-ever game from Typhoon Studios, out now for PlayStation 4, Xbox One, and PC. It ain’t perfect, but it’s got heart. It’s a succinct and loving throwback to the Metroid Prime series that fills a pretty specific niche in a sea full of service games that want to become your part-time job. But I have to be honest, I hate seeing the word “savage” in a game about exploration. I’ll get to that in a moment.

Your character is a “pioneer” who works for Kindred Aerospace, the fourth-best space exploration company in the galaxy. It’s up to you to survey the planet and investigate a mysterious tower looming on the horizon that seems to be left over from an ancient civilisation.

That means a mix of collecting resources, platforming, shooting alien creatures like small animals and giant terrifying monsters, and old school puzzle-solving set on the kind of lush, colourful planet you might find in No Man’s Sky. But instead of offering procedurally generated points of interest, Journey to the Savage Planet encourages you to explore a densely packed world and craft upgrades you need to pass dead ends.

The experience of doing all of these things doesn’t feel as fine-tuned as it does in similar games out there. Shooting feels more in line with something from a Fallout game or The Outer Worlds. It’ll do, but it ain’t Destiny. And that’s fine. The exploration is where it’s at.

Scanning the world and looking for secrets in areas that I finally got access to because of a new upgrade is a tried and tested feedback loop. Gimme it.

Zipping around the world feels exhilarating, but the platforming was super awkward for me on console because of weird button placement. There were times when I wanted to slide, but I’d crouch instead. Repeatedly holding both the X and square buttons to do my rocket jump just”¦ didn’t feel great.

The humour is not necessarily my cup of tea, either, but if you like that Borderlands style of “lol everybody sucks, let’s laugh at “˜em” series of jokes, then get ready for a healthy serving of that.

Anyway, Journey to the Savage Planet is flawed but still fun, and this is definitely all I have to say about it. Bye.

Just kidding. I’ll be real with you. My eyes rolled right the fuck out of my head when I read the title of this game at its reveal at the 2018 Game Awards. I know I sound like a wet blanket, but just”¦ hear me out. The word savage has a long history being used to justify violent behaviour by colonizers.

That history didn’t start with Journey to the Savage Planet. This ain’t new.

Gabriel Soares wrote a dope piece for Vice Games called ““˜Civilisation’ and Strategy Games’ Progress Delusion” that I’ll link in the description if you want a good read. He points out that most strategy games are rooted in the British philosopher Herbert Spencer’s definition of evolution”the advancement from “simplicity to complexity.”

Put the dictionary down. Hands where I can see “˜em. Is the word savage inherently offensive? Technically, no. But the word “savage” has a weighty history. And look, a lot of that history is racist as fuck.

Here’s the Cliff’s Notes on how that played out in the world: In order to justify the destructive effects of colonisation, it was crucial for the United States to paint Native people as primitive savages roaming the wild:

“The tribes of Indians inhabiting this country were fierce savages”¦to leave them in possession of their country was to leave the country a wilderness.” “Chief Justice John Marshall

That kind of language was mixed into the cement that founded this country. But why do we still need to think about that now? Well, this was taken from a news segment in Maine from February of 2019:

On the flip side, there was always the heroic explorer, braving the wilds to take what was rightfully theirs”often by eliminating whatever or whoever was in the way. That was treated like a good thing.

That dishonest idea of the brave explorer got filtered into pop culture, along with bonus racist stereotypes!

Common in movies that romanticized that period of time, it even seeped into sci-fi. Brown face and all.Â

It ended up making its way into games, like 2018’s The Quiet Man, which features a Spanish-speaking gang made up of brown people called [checks notes] The Savages.

So “savage” just became shorthand for instinctively violent. Primitive. To be explored and”¦ conquered. But it’s impossible to ignore the common thread between all the people it’s been used to describe.

Back in March of 2019, Kotaku asked Typhoon Studios about the inclusion of the word “savage” in their title. They responded with:

“Our use of the word “˜savage’ is an adjective to describe this vibrant, mysterious and comedic world and is not, in any way, used as a noun directed at a group of individuals or creatures in our game. We hope players will enjoy this upbeat space adventure when we launch early next year and look forward to continuing on our path to create positive and inclusive gaming experiences for all players.”

You know what? I believe them. I don’t think they’re intentionally brushing off the history of the word. In this game, you’re not killing and herding off aliens into camps or anything. But every time the game refers to me as a “pioneer” or a “colonizer,” it’s hard for me to just vibe with this as a purely “hardy har har” harmless joke. I’m still overpowering the life on this planet in the hopes that I can scavenge enough goodies in the name of exploration and advancement.

In Kotaku‘s review of the game, Zack Zwiezen writes: “While the game makes a lot of jokes about this theme and the ending tries to hammer it home a little more, ultimately the wacky and fun atmosphere of Savage Planet distracts from the darker part of the story, which never becomes much more than a background detail.”

There are commercials for fake TV shows, toys, and corporate propaganda that telegraph how horrible the company that hired you is. Its employees are being exploited by a greedy and incompetent CEO. There are even some shots at predatory microtransactions.

I’m happy to point and laugh at capital “C” Capitalism, but when the game then laughs about destroying the mysterious ancient ruins just in case the intelligent life there poses a threat, I’m, uhh”¦ gonna feel a certain way about that.

The game just pokes at everything and says, “lol wild huh?” And then does nothing with it.

Typhoon Studios co-founder and creative director Alex Hutchinson discussed his approach for the game in an interview with Game Informer:

“For me, these days it’s not just that you have a specific idea for the game you want to make. It’s more that you have design principles that you want to maintain. We sell something that you basically buy on emotion. It’s not solving a need for you. It’s not solving an illness. And it’s not a business decision like “˜oh I need this everyday, but you made it cheaper.’ We are a pure emotional purchase. So we have to have something that has a strong flavour and is different to what’s out there and try and hit an emotional beat with people. On the design side for me, I want exploration and systemic exploration to be a feature so to enable the player as much as possible to tell their own stories and goof with the stuff that we built.”

I’m not asking for Journey to the Savage Planet to have some super poignant message at every turn, but according to Hutchinson, the game is meant to have a “tone of sort of early science-fiction of hopefulness.” But it’s worth asking whose hope it is we’re talking about.

Man, some of my favourite games are all about colonising something in one way or another. I’ll admit it. I love exploration-focused games. But like a lot of folks out there, I can have fun with a genre I love and be critical of it. Wild concept, I know.

I’m not going to die because of the title of this game or its story’s lack of conviction. Like I said, this ain’t new. I even thought the game was pretty fun!

But that “emotional purchase” Hutchinson talks about hits a little differently when history paints some of us as savages”Columbus Day is still a national holiday.

There are way bigger problems out there right now, but do me a favour, Typhoon Studios: Pick up two for your mistake. 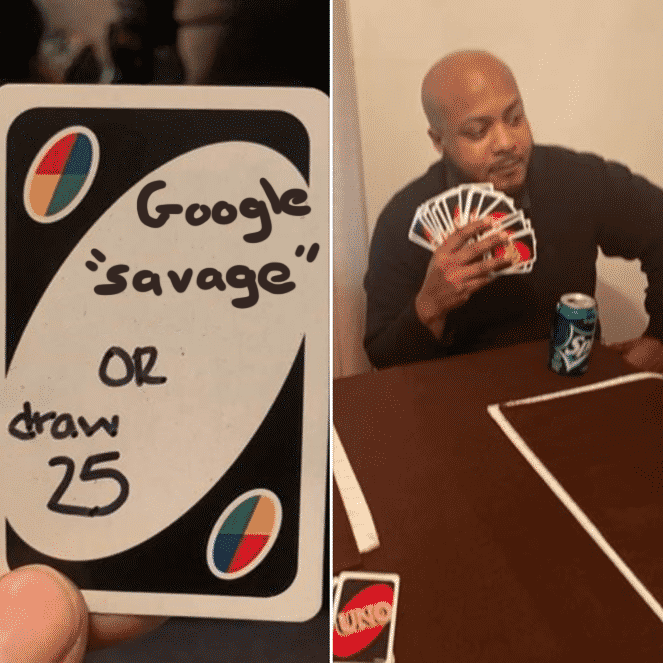