In this game, you don’t punch enemies. You slap them, complete with a comedic thwack sound. Alien birds fart carbon. You fling purple goo at giant frogs. All of this wackiness makes Journey To The Savage Planet feel less like Star Wars or Mass Effect and more like a campy retro sci-fi film that would have been riffed on. And like those films, Savage Planet sometimes feels like a bit of a mess with annoying bugs and a story that never really goes anywhere.

Journey To The Savage Planet is a game about exploration, adventure, and puzzle-solving that just so happens to include some crafting and shooting. The setup is simple. You are an explorer sent to a lush planet called AR-Y 26 by the crappy space company Kindred Aerospace. Your mission is to survey the planet and all of its creatures, plants, caves, and rivers. Kindred boasts that it is the fourth-best intergalactic exploration company, which means they don’t have a lot of money. You are sent to this strange planet with nothing but a spacesuit, a 3D printer, an AI assistant and a ship with no fuel for a return trip. Good luck!

Starting the player with basically nothing serves two purposes. It establishes that your company is greedy and incompetent, which is a running theme throughout the game. It also creates the game’s core loop. Players explore the world, collect materials like carbon, return to their ship, use the 3D printer to build a weapon, suit upgrades, new gadgets and other bits of gear, then exit and explore some more. The goal is to survey the planet, find fuel and leave. AR-Y 26 is broken into a few biomes, each made up of smaller areas. Each section of the planet contains different creatures, plant life and places to investigate. You’ll explore snowy caves filled with cute and fluffy birds, big desert areas where dangerous alien-lizards roam about and even weird floating islands made rock and mud. As you explore you will encounter weird animals and plants. This is not a peaceful process.

In the fiction of this game, no one cares about the planet or its life. The explorer you are playing is a voiceless protagonist who recklessly damages ancient artifacts, kills hundreds of innocent and docile creatures and who grabs anything that isn’t nailed down. All in the pursuit of getting paid and leaving. Kindred is clearly more invested in extracting resources from this planet than treating it with the respect it deserves. As soon as you exit your spaceship, you get a trophy called “Colonizer.” So, yeah, you aren’t a force of good. While the game makes a lot of jokes about this theme and the ending tries to hammer it home a little more, ultimately the wacky and fun atmosphere of Savage Planet distracts from the darker part of the story, which never becomes much more than a background detail.

The game doesn’t have narrative depth, but it is visually arresting and fun even if it is filled with a lot of…uh..goo…

Do you enjoy seeing goo in your video games? Hopefully, you do, because Savage Planet is overflowing with alien goo. A lot of the systems in the game involve goos of various colours. Orange goo pods are hidden around the planet. Smashing them into your face rewards you with more health and stamina. Purple goo can be collected and tossed at enemies to stick them to the ground, making it easier to shoot them. Enemies pop open when killed, blasting the area with goo.

Things get gross but in a cartoonish and colourful way. This tidal wave of neon goo also highlights how vibrant Savage Planet looks. Nearly every biome has a distinct palette of garish colours like a cover of an old sci-fi novel. Creatures are covered in pink, lime green, and purple skin. The mountains are different shades of red and yellow. It’s all so lovely and disgusting, but in a good way. Journey To The Savage Planet

They should have sent a poet and some extra paper towels.

I enjoyed this game the most when I was exploring its gorgeous goo-filled world. But not at first. The starting hours are all about getting the ability to double jump and grapple. So you start by wandering around, seeing all these cool things just out of your reach. Then you get a jetpack and a plasma grapple hook and suddenly it gets so much better. You can swing around like Spider-Man. With some practice and more upgrades, I was able to move around large portions of the planet in seconds. It felt great.

Combat doesn’t work as well as the traversal mechanics. It’s too simple. You spend most combat encounters shooting enemies without needing to strategize. Some later enemies have armour you need to pop off using acid goo, but the combat never feels as exciting as moving around. Shooting stuff becomes more enjoyable when the game sets up cool areas that mix shooting and traversal. One boss fight toward the end had me zipping around, popping enemies and zooming to different platforms in a ballet of death and goo.

Even with a day one patch, the game sometimes breaks. It turns out the worst part of this planet isn’t the giant frogs that slam you around or the weird tiger lizards that move fast. No, the worst thing you will encounter in the Savage Planet is bugs. Video game bugs. Enemies sometimes would stop moving and wouldn’t take damage. I once had a damage indicator pop up and never go away, until I restarted the game completely. I couldn’t use my scanner on one type of flying enemy. Most annoying of all, some enemy weak points wouldn’t take damage when I shot them. None of these problems are game-breaking or ruined my enjoyment of Savage Planet, but they did make the whole thing feel floppy and unfinished. If you are reading this a few months after the game came out, I hope these bugs have been squashed.

I’m a sucker for a good live-action clip in a video game and Savage Planet has a lot of them. Throughout the game, as you complete objectives and upgrade your gear, you return to your ship. Its interior is chockablock with TV screens. Each time you return, they play fake ads for various products and services. All of these ads are live-action or use live-action segments. There’s a weird kids show starring a disturbing puppet. Or my favourite, a disgusting burger joint which seems to be run by a criminal with bad hygiene. They are all amazing and I love them. Some of the live-action clips include some…odd CGI elements.

Besides watching weird videos, your home base is where a lot of the story happens in Savage Planet. You occasionally get messages from the CEO of Kindred, which paints a picture that your mission is special and not entirely legal. You also receive emails, which help expand the universe of Savage Planet and explain why someone would even take a job like this. Turns out, the Earth is screwed, and everyone is in debt.

When you die, you will spawn back at your home base. In the game’s fiction, you are just cloned and get to live again. Also, in a dark twist on video game respawning, you can find your dead body in the game world. You can even scan it or bury it. Doing so will leave a little marker, with a number indicating which death this was, so as you go back to re-explore parts of the planet, you might stumble across a marker and remember “Oh yeah, that’s when I missed a jump and plummeted to my death.”

After 12 hours of exploring, shooting, jumping and sometimes dying, I finished Savage Planet. The end feels like it comes out of nowhere as the story tries to become a lot bigger and more complex in its final hours. If you complete your mission before leaving you get a hint at what could be a sequel or maybe DLC. While I didn’t particularly like the ending, I did like when it arrived. You can easily beat Savage Planet in about 10 hours. I took longer because I got way into zipping around the planet and finding secrets. But even 12 hours feel breezy compared to games that ask for 100 hours of your time. Those can be fun, but I’m happy to get more games that I can beat in a weekend. 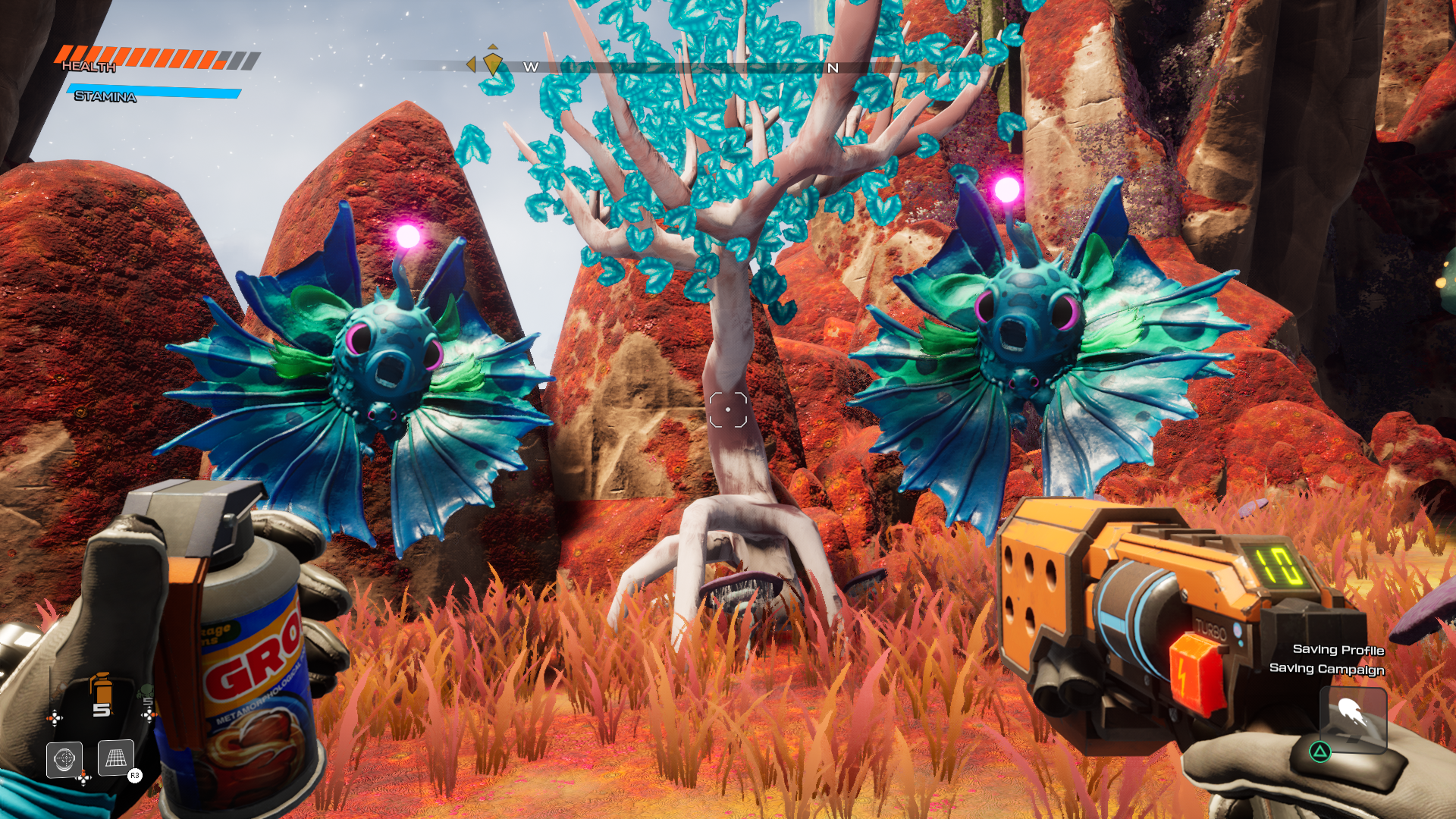 With its wacky humour and colours, shorter length and focus on adventure and exploration, Journey To The Savage Planet reminds me of the games we used to get all the time back in the PS2 era of gaming. It feels like one of those games I rented and played non-stop over the weekend, finding all the secrets and beating it in the early hours of Monday morning.

It’s unfortunate that Savage Planet suffers from some annoying bugs and I wish the story came together into something more meaningful or interesting. I still had a blast playing it. I want more games like this in 2020: Games that aren’t focused on selling a battle pass or being 200-hour epics, a game that knows it’s wacky and embraces that and lets the player have fun in the world. In 2020 I need to smile more, and Savage Planet made me feel great, even if I was covered in goo.