Luigi’s Mansion 3 Developers Explain Why Their DLC Is Multiplayer

The developers of Luigi’s Mansion 3 say they didn’t strongly consider making single player expansions for the hit Switch game, but they promise that the recently announced $US10 ($15) multiplayer add-ons will satisfy players. They’re aware that it might be a tricky sell.

“Most people buying or even thinking about a Luigi’s Mansion game just want the single-player (or Gooigi-partnered) story experience,” said the game’s creative director Bryce Holliday, whose studio Next Level Games has long partnered with Nintendo to make the multiplayer soccer Super Mario Strikers games and the most recent two Luigi’s Mansion adventures. “Schedules dictated Story Mode had to be built first. However, at NLG, we love making multiplayer games, so this DLC is full of those experiences we wanted to share.”

Nintendo surprised people last month with news of forthcoming multiplayer DLC, but it hasn’t explained much about it and only offered a tiny bit more detail in a new interview with us. The DLC will come in two parts, the first by the end of April and the second by the end of July. Each part will include three new local multiplayer mini-games for Luigi’s Mansion 3’s ScreamPark mode, and three new costumes and floors for the game’s ScareScraper ghost-hunting multiplayer mode, according to Nintendo. The costumes make Luigi look like a knight, a mummy or Elvis, and the new floors match those themes. 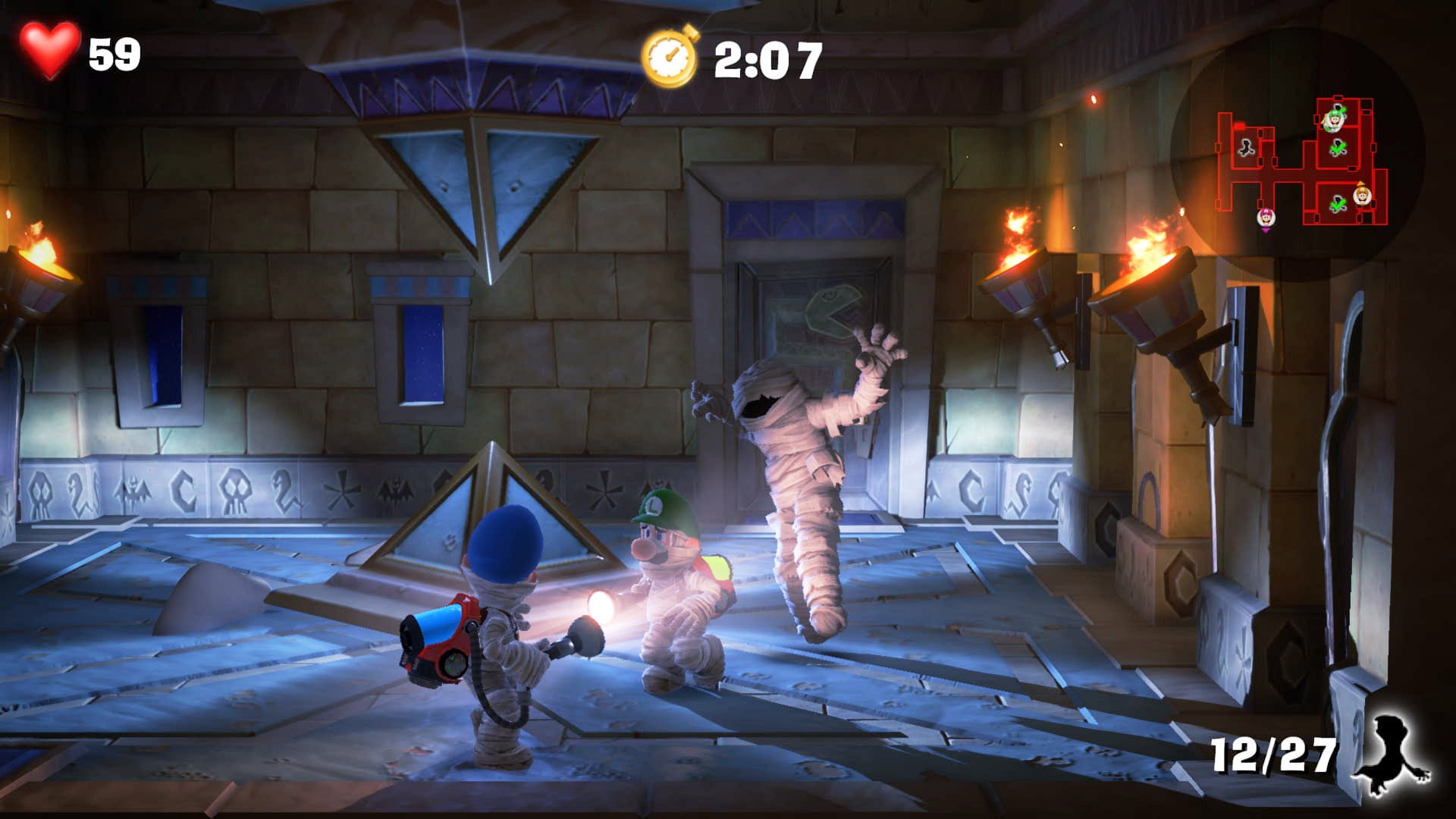 “When playing ScareScraper while equipped with an added costume, a floor that is the same as that costume will appear, and ghosts that only appear on that floor will show up,” one of the game’s producers, Yoshihito Ikebata, told Kotaku. “If you catch those ghosts, they will be added to the gallery, so I would like for players to aim for completion.”

The ScreamPark mini-games, which Nintendo has spoken about even less, expand on a mode that producer Kensuke Tanabe said wasn’t even originally supposed to be in the game. “The multiplayer ScareScraper was a mode that we had planned from the beginning, but with ScreamPark, we only had a local eight-player communications experiment at the time,” he said, recalling the early days of Luigi’s Mansion 3’s development. “However, when we had eight people playing on a Nintendo Switch system placed on a table, it really felt fun with this group of eight people huddled together and playing.” He had encouraged the team to build the mode out, but it wasn’t possible to get all their multiplayer ideas into the game before it was released last October. 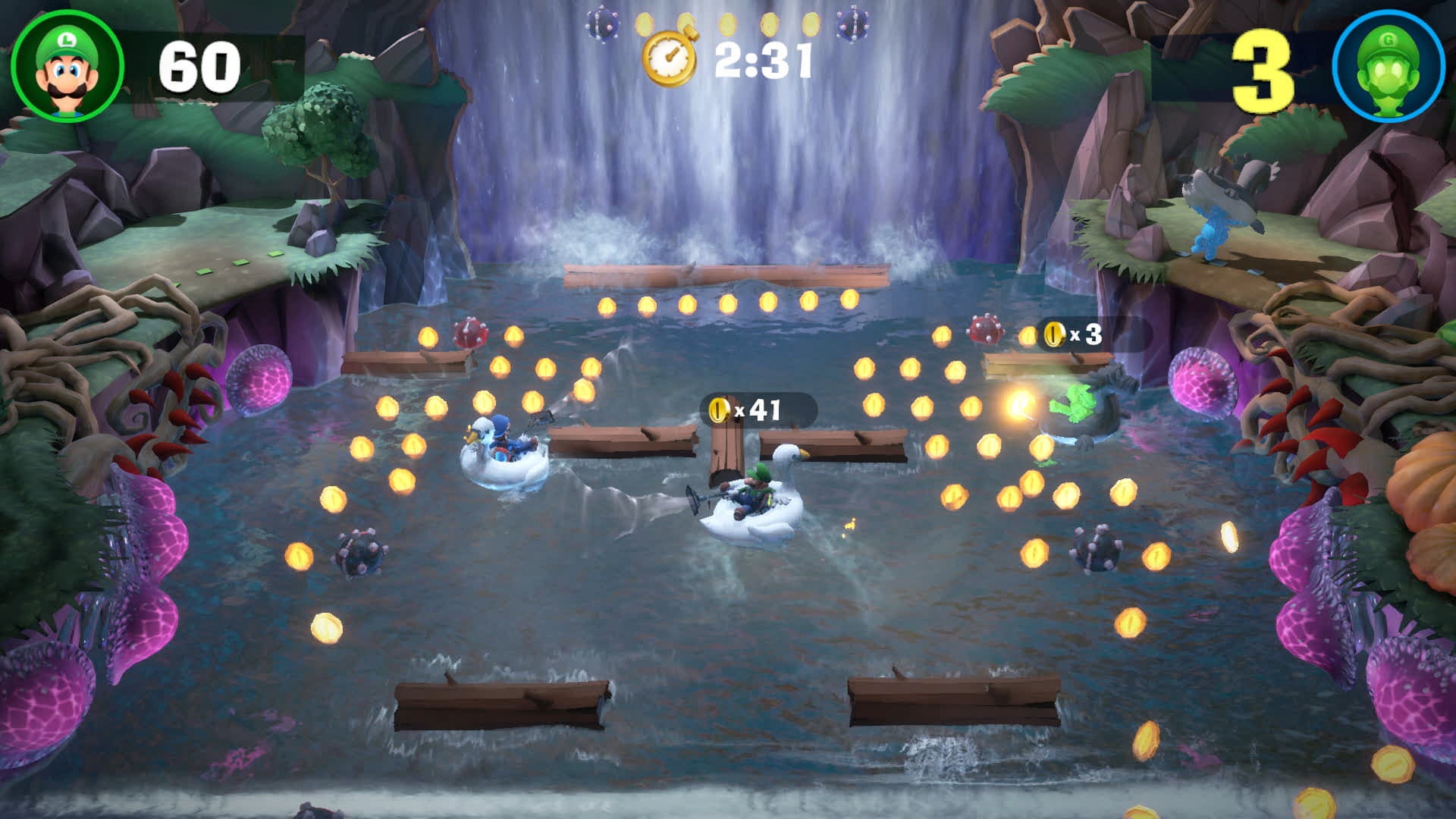 The new DLC will add multiplayer ScreamPark mini-games like this one (Screenshot: Nintendo)

All that may be well and good, but as Holliday noted, and as we suggested in the interview, multiplayer isn’t really the draw for a Luigi’s Mansion 3 game. So why not add some DLC floors for single player or even another hotel?

“I hadn’t thought of adding Single Play floors at all,” Tanabe said, noting that it might break up the flow of the game. “In Luigi’s Mansion 3, it has a solid introduction, development, twist and conclusion. Therefore, by inserting an additional floor, there would be an inconsistency with the setting and chronological order, and we would end up restarting the story in an incomplete way, which the player should have already finished. I didn’t want to do that.”

“Also, if we created a second hotel, it would take a long time to develop,” Ikebata added, “so that would be difficult.”

It sounds like solo DLC was at least considered by the main Next Level Games team making the game. “In the very beginning, there was an urge from NLG to do a single-player expansion, but it faded quickly,” Holliday said. As for the additional multiplayer content, he said the team “had a lot of multiplayer ideas that would be fun to develop and share with fans that were getting cut. Making story mode games is a difficult and slower process, development-wise, than multiplayer modes, so we ended up pushing them to DLC. Multiplayer DLC development will be a fresh break for NLG and forces some exercise of our ‘Multiplayer brains.’ An additional benefit is that the cut single-player ideas can be saved for something else in the future.”

The team nevertheless seems to recognise why players might be sceptical about this kind of addition to the game, but they encourage players to wait and see. “If you enjoyed or were simply intrigued by the multiplayer part of Luigi’s Mansion 3,” Holliday said, “you are going to find fun in this DLC.”

We didn’t just talk DLC with the Luigi’s Mansion 3 team. We’ll have more about the game’s ghosts, money, that moment with Morty and more in the coming days.