Today Nintendo announced its cloud storage program for Pokémon called Pokémon Home will have a paid and free version. The free version has a paltry max capacity of 30 Pokémon while the paid version at $US16 ($24) a year will let you store up to 6,000.

The service, set to launch in February, will make it possible for players to bring over their Pokémon from the old storage system, Pokémon Bank, into Pokémon Home and ultimately the latest Pokémon games on Switch (as long as those games support those particular Pokémon). These transfers are a one way trip though, so if you take your Growlithe from Pokémon Moon, for instance, and put it in Pokémon Sword, you won’t ever be able to transfer him back again.

Nintendo is making the service free for the first month so players can get their Pokémon houses in order, but after that they’ll need to pay $US3 ($4) a month or up to $US16 ($24) for the whole year in order to get the full benefits.

Here’s a breakdown of what’s different between the free and paid versions of Pokémon Home: 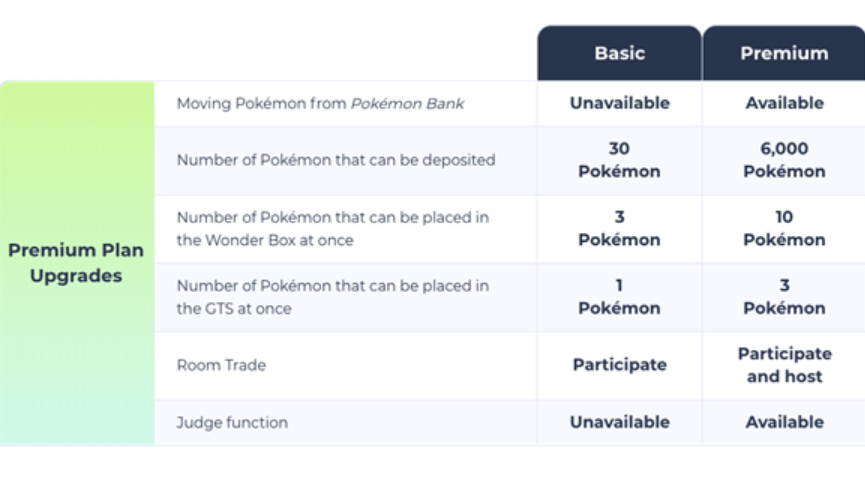 There are three ways to trade Pokémon with Home. The first are Wonder Boxes that let players trade mystery Pokémon to random strangers around the world. The second are trade rooms where up to 20 people meet in a lobby and make offers. Finally there’s the Global Trade System that lets players request specific Pokémon. Paid subscribers get better versions of each of these. Then there’s the Judge feature which discerning players will really need since it’s the only way to check on how strong a Pokémon is before making a trade.

If you really want to collect them the paid version might be a no brainer, but to put it in perspective Switch Online, which is also required to use Pokémon Sword and Shield’s online features, already costs $29.95 a year. Players who want to get the most out of the games will effectively need to pay almost twice that.

Of course for others that might seem like a small price to pay to finally bring over many of the Pokémon they’ve been patiently raising on the 3DS games to the current generation.