Some people go to Times Square on New Year’s Eve to brave the cold, watch the ball drop, maybe get seen on TV or even pop the question. Not me. I went there to play Outer Wilds. I’m pretty sure I had the best time of anyone there.

I got to Times Square at 9:29 am on New Year’s Eve, approaching from the east side of the famous crossroads of the world. I walked west, not quite all the way to Times Square proper, to go to my office. That’s right, Kotaku Towers are in Times Square.

Everyone else? They got to Times Square and just had to stand outside in the cold.

I took the elevator more than two dozen floors up to my office, thrilled to have gotten past NYPD security checkpoints with no hassle. I’d even brought a piece of unopened mail to prove that I worked in my office building. 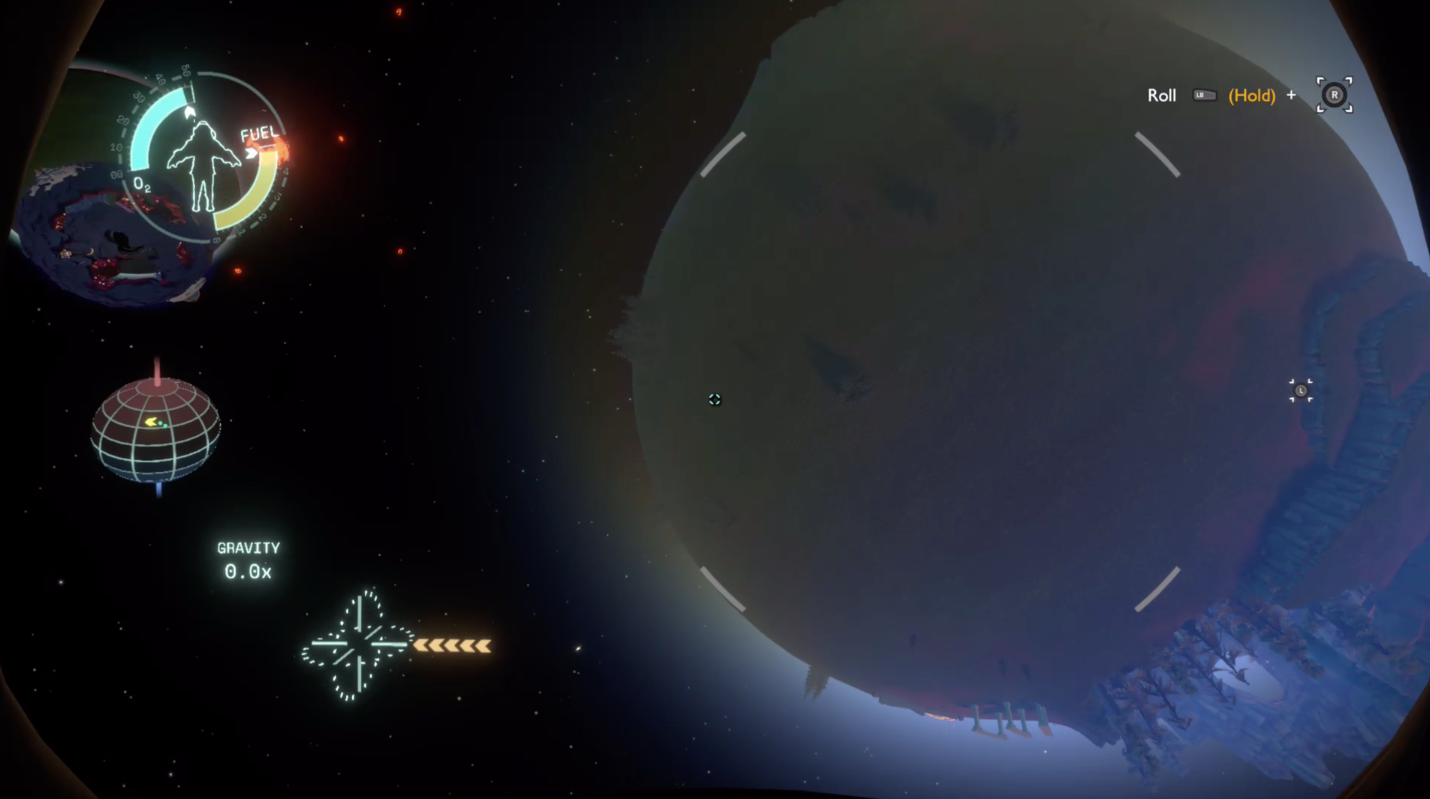 And there I settled, turning on my office Xbox One to try to plan, maybe even finish, the mystery-filled space exploration game Outer Wilds. Multiple Kotaku staffers have raved about this first-person adventure, which quietly invites the player to one nearly religious experience of discovery after another. On this day, I was going to fly my spaceship back into a treacherous, hollow planet called Dark Bramble, which is filled with hostile space fish but also purportedly contains a lost spacecraft. Flying into Dark Bramble involves reckoning with some strange behaviours of distance and volume, as the inside of the planet seems ever larger the deeper into it you fly. Yet there had to be something in there I needed, and I would find it.

Outside, down below, crowds gathered to do something less exciting.

Inside, I kept exploring Dark Bramble. Why had I just not done this at home? Why had I braved the most crowded place in the city to play this game? I’m a dad. My home is small. My kids are young, and I don’t yet play games in front of them. I had the day off. The best way for me to get some end-of-year gaming in was to head to the office, while someone else took care of the kids for the day. Trust me: it’s hard to make time to play games when you’re focused, rightfully so, on raising toddlers. 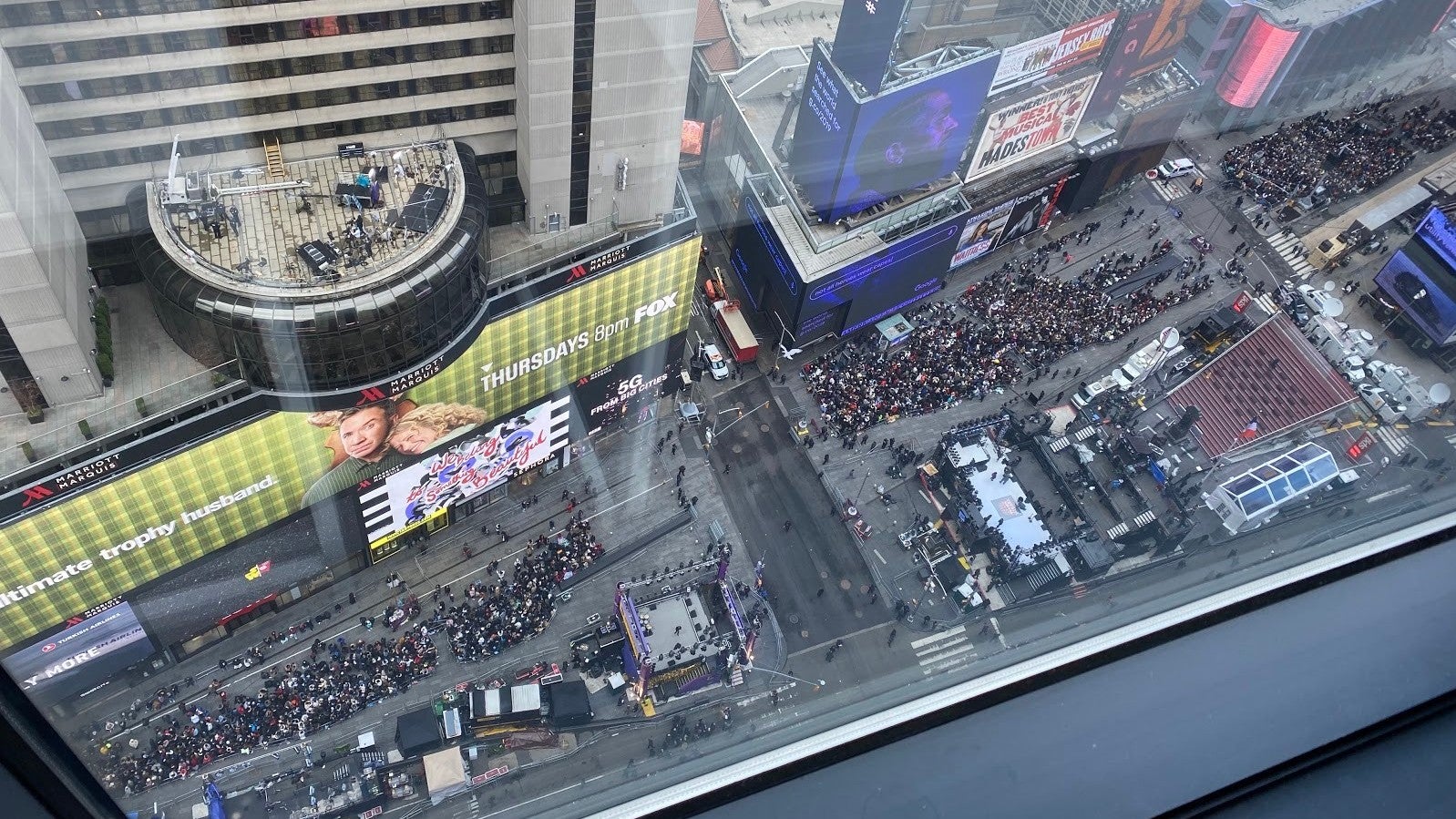 The view outside my office window at 1:30pm, as Times Square began to fill with revelers. (Photo: Kotaku)

Outside, by 1pm or so, a band—a boy band maybe?—was singing and dancing on one of the New Year’s stages. People chanted for them. “BTS?” “”DTS?” I wasn’t sure.

Inside, I couldn’t figure Dark Bramble out, and I was getting stressed. I’d had to take an hour for a work call, but I’d also put two hours into my Dark Bramble search. I began to stress. My day was slipping away.

I gingerly DM’d Kotaku managing editor Maddy Myers for a hint. She reminded me that my character in the game has a way of listening for signals. Oh right. Of course. I hadn’t used that option in the game since I was last earnestly playing several months ago. You always forget the tools available to you.

I found some incredible things in Dark Bramble. Soon, I left that area and embarked on a new mission to land on the Quantum Moon, a seemingly intangible heavenly body that regularly shifts its orbit from one planet in the game to the next.

Outside, LL Cool J ripped through some of his classic songs, warming up for a later performance.

I tried a bunch of things to reach the Quantum Moon. I even ejected myself from my ship. Got an achievement for that. Only 4% of other players had also done so. 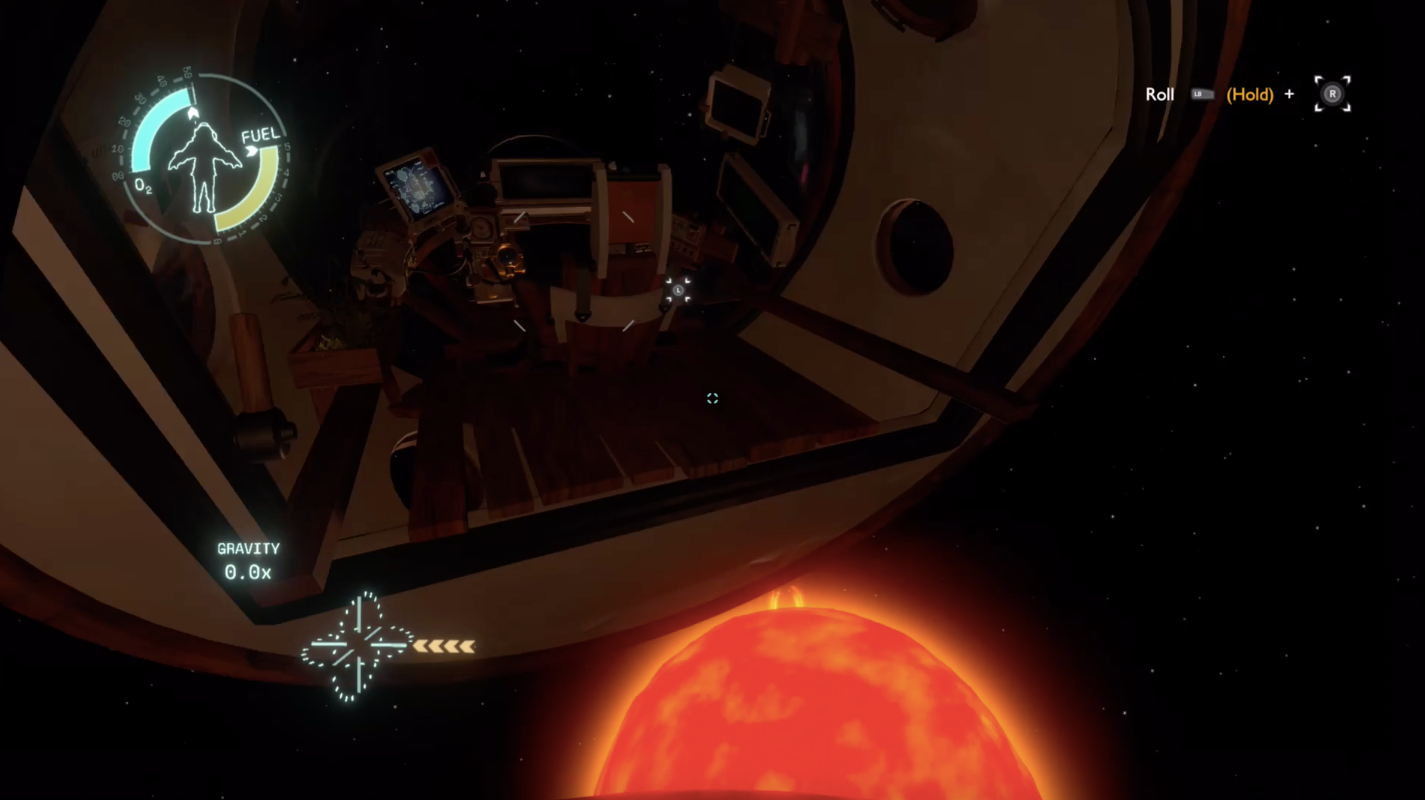 Pressing eject and then slipping out the cockpit. Not the best Outer Wilds survival strategy. (Screenshot: Kotaku)

Ejection didn’t work, nor did a lot of other things. I started panicking again. My Dark Bramble adventure had turned out well, but my time was nearly up. I’d skipped a day hanging out with my kids for just Dark Bramble? Not good enough. I needed to reach that moon!

I couldn’t bring myself to ask Maddy for another hint. That’d be embarrassing.

So I asked someone else, Kotaku podcaster Kirk Hamilton. He’d already advised me to try to reach the Quantum Moon and had resisted giving me any hints. I texted him at 3:43pm. Was he sure that the game had clearly provided good hints about how to reach that moon? “I just keep flying through it,” I told him, clearly fishing for a hint.

He texted me back with a tiny hint, but I didn’t see it. According to my phone, at 3:46pm I was texting him to tell him, “Never mind!!!” I’d figured it out. Sometimes, all your brain needs to do to solve a puzzle is to reach out for help, release the stress of being confounded, and then the solution presents itself. I landed on that Quantum Moon.

Outside, it got darker. The crowds filled the streets.

Inside, I explored the Quantum Moon some more, then checked the clock. At 4:30pm I turned off my Xbox One. I got in the elevator, where I ran into people working higher in the tower and who planned to stick around to see the ball drop. I got down to the lobby, walked out of the building and walked back east to the subway to go home.

I’d spend the rest of my New Year’s Eve at home with my wife and kids. I’d be warm. I’d be inside. I’d have the knowledge that I now knew how to land on a Quantum Moon.

The people in Times Square could only wish they’d had nearly as satisfying a day.