The fall of Ben Solo is a path littered with regrets. Luke’s fleeting impulse to cut down the darkness in his own student, the shadow of expectation born from his father, his mother, and the bloodline an entire galaxy can’t seem to escape from, let alone a young man plagued by voices in the dark. But this week’s new Star Wars comic gives us an image of Luke that would be burned into Ben’s mind far after he became Kylo Ren.

The Rise of Kylo Ren, by Charles Soule, Will Sliney, Guru-eFX, and Travis Lanham, might be only two issues into its run. But it’s already given us some fascinating additional layers to the story of that fateful night Ben thought he laid his master low, putting himself on a path toward Snoke, the Dark Side, and the mysterious Knights of the the Knights of Ren, also gives us a fascinating recontextualized look at what would become Luke and Ben’s final “battle” in The Last Jedi. 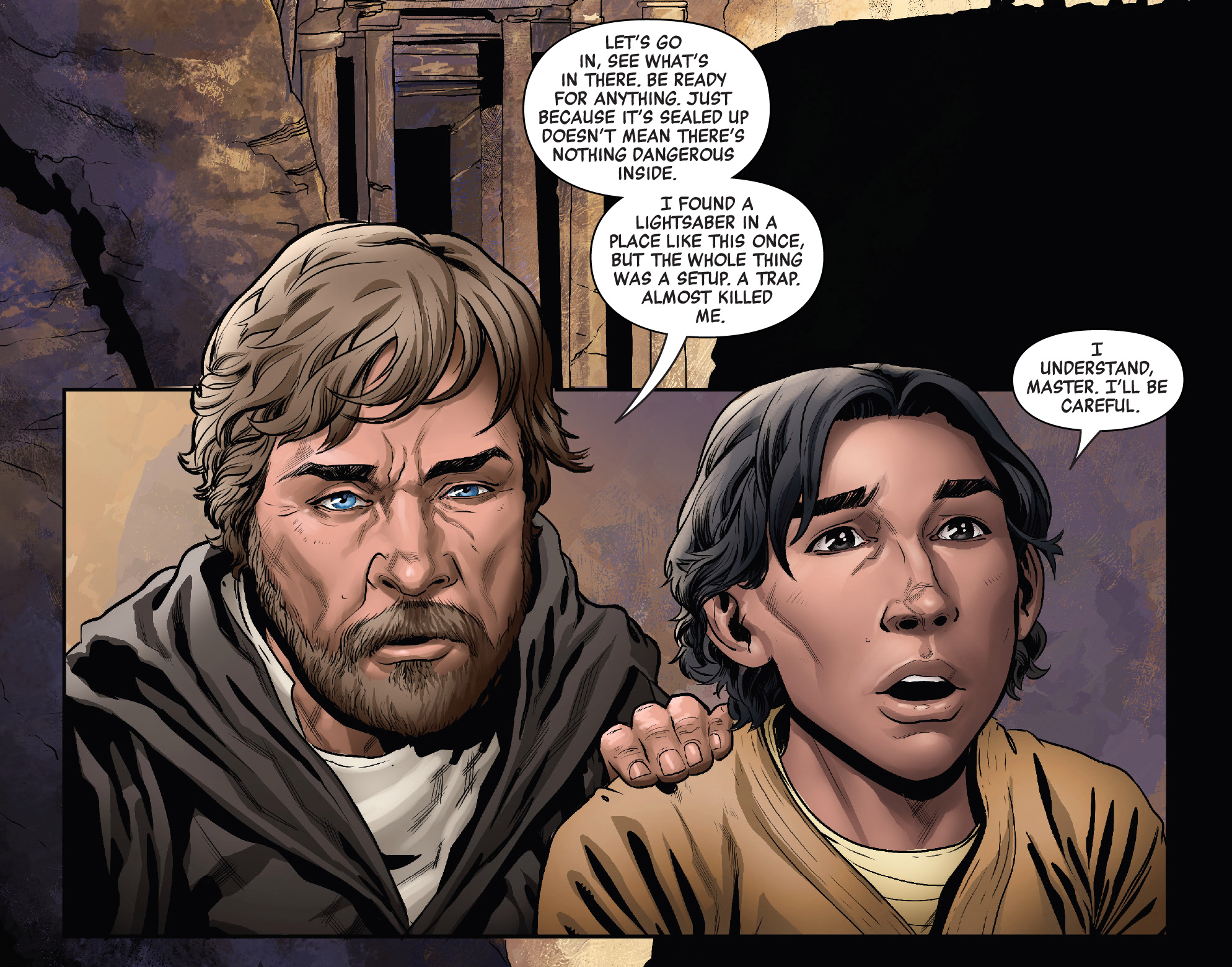 Framed by a present in which Ben has fled Luke’s burning Jedi Temple and arrived in the arms of Snoke, Rise #2 primarily flashes back to a mission he went on with both Luke and archivist Lor San Tekka while still a young boy to the planet Elphrona, far out in the Outer Rim. Home to a Jedi facility filled with artifacts and information (and some sneaky weaponry), it’s not long before Luke, Tekka, and Ben find themselves facing some similar treasure seekers, albeit with a far more sinister intent than their own for Elphrona’s trinkets.

What follows is perhaps the sort of thing fans disappointed that Luke’s final stand in The Last Jedi wasn’t all hurling AT-ATs about with the Force and kicking space-Nazi arse might regard with visceral glee. Confronting Ren and his Knights alone”as, Luke introduces himself, the last of the Jedi”while Ben and Tekka look on, Luke becomes a devastatingly elegant whirlwind of precise destruction. 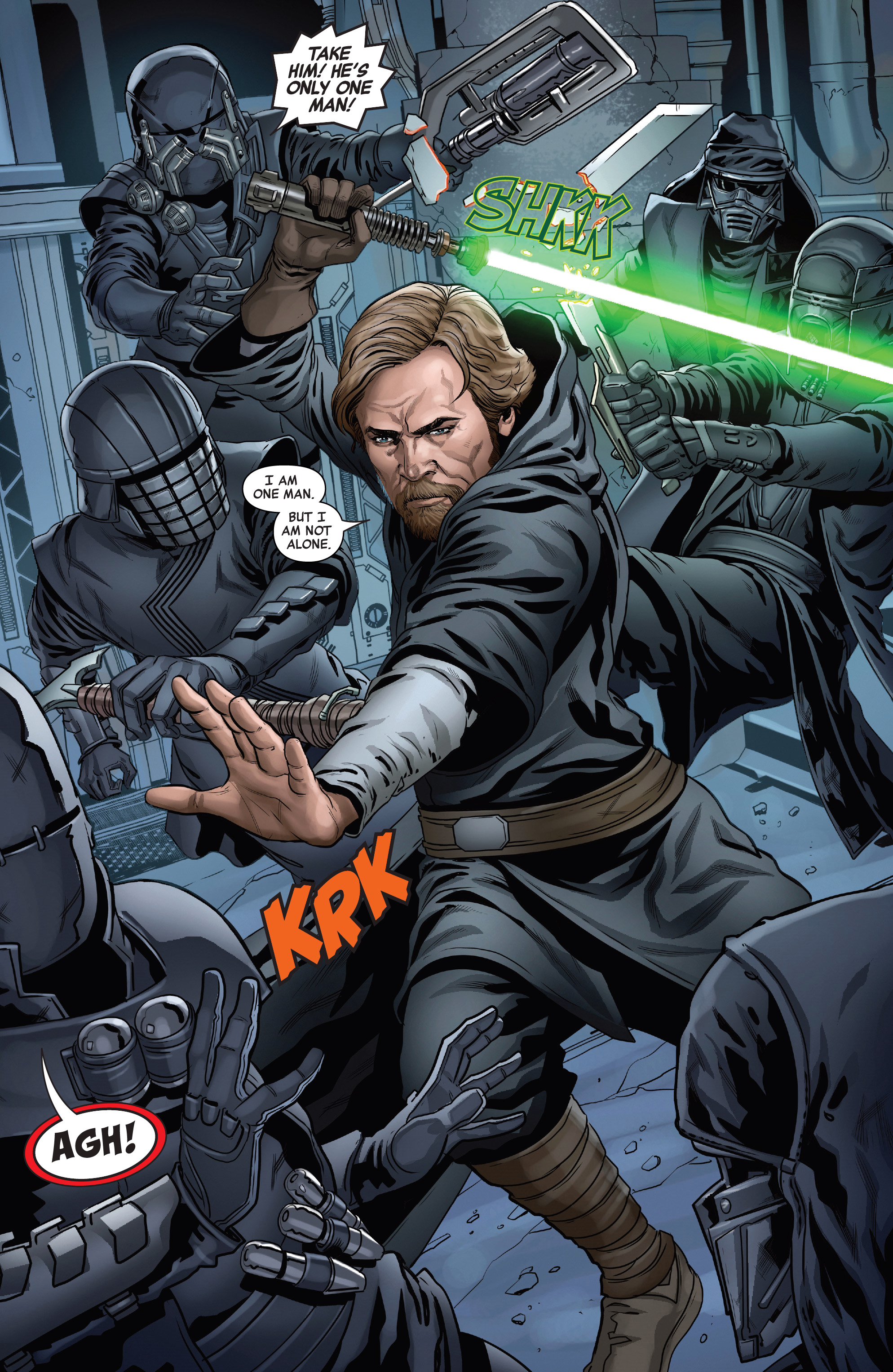 And yet, as action-packed as it is, it’s not really visceral. Powerful, yes”an exemplification of the power Ben confides to Snoke he is frustrated Luke will not let him tap into. But yet also serene and controlled. Never acting in pure violence, only seeking to disarm instead of kill, Luke dances through Knight after Knight. A blade of the light, nimble and sharp, compared to the cudgel of darkness they wield against him. In a matter of moments, the duel is over, and Luke has defeated seven men without breaking a sweat.

That this is Ben’s first encounter with the Knights and their leader is not the most formative moment for the young man in this issue, however. It’s this mythical, romanticized moment when Luke Skywalker really embodies his power, his grace, his ability as a Jedi Knight. This is the legend the galaxy speaks of in hushed tones, the legend that would come to haunt Luke’s perceived failures as much as they would Ben’s own. This is the specter he has to live up to, alongside his father, his mother, and the thousandfold generations that live in his blood as a Skywalker. 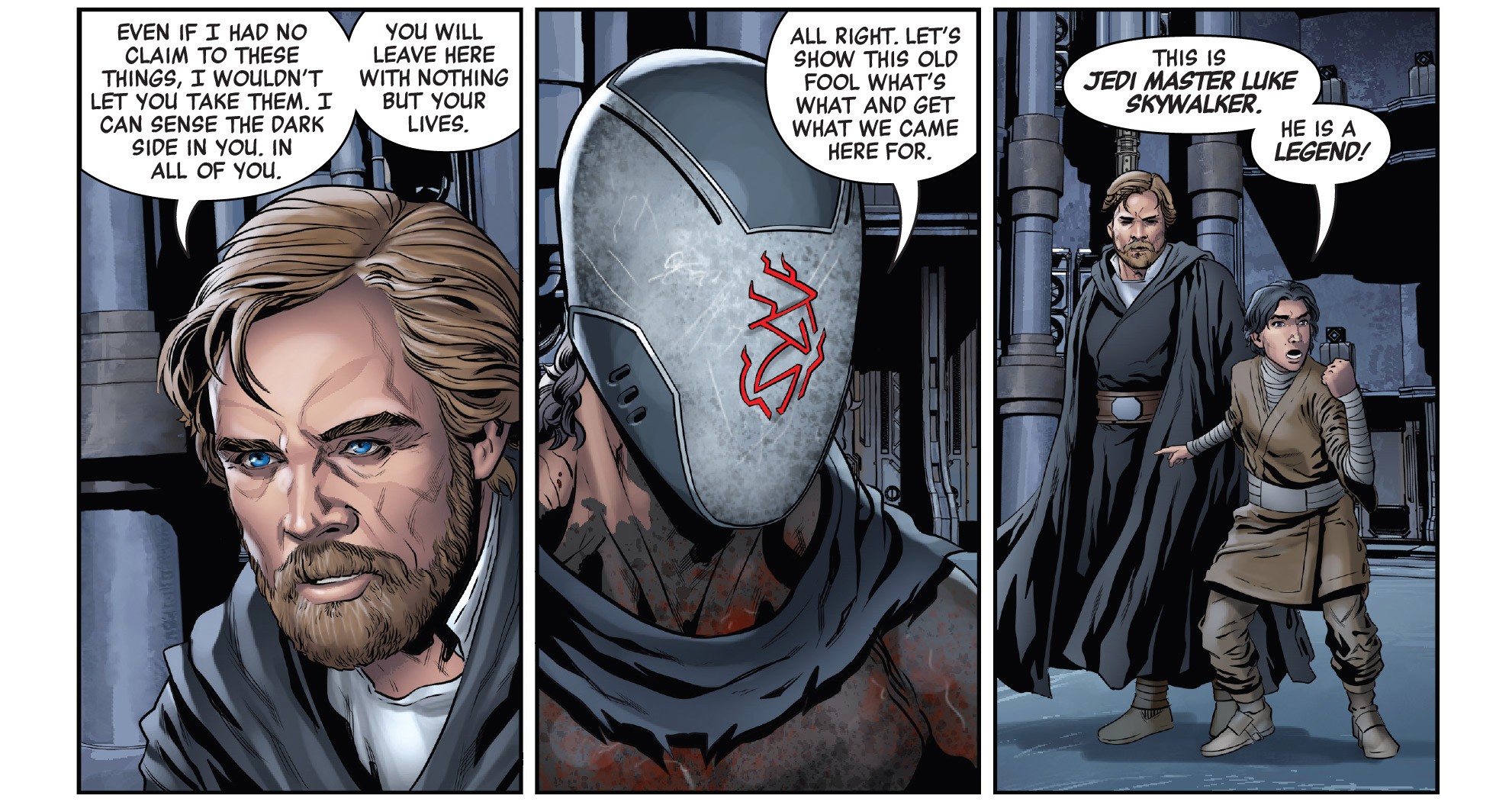 Which is why the greatest trick that Luke pulls in The Last Jedi isn’t just his grand hoodwink of astral projection. It’s that he does it dressed in these clothes that we now know are tied, very specifically, to this moment from Ben’s past.

It’s a contextualisation in hindsight, of course”Soule and his team were likely not plotting this issue in the years of The Last Jedi‘s production”but it’s a fascinating one to consider nonetheless. In front of Kylo Ren on Crait in The Last Jedi, the newly-christened Supreme Leader, stood his former master. And not just that, but looking exactly as he did when, in front of a younger Ben’s own eyes, he single-handedly laid the Knights of Ren low. The Knights Ben took his new name from, the Knights that Ben now leads.

It’s both perhaps one of the most gloriously troll-ish things Luke could do to his former apprentice”he did, after all, in Yoda and Obi-Wan, learn from the best when it came to being a cantankerous old coot”but also his deftest act of non-violence. In appearing as he does on Crait, as he did on Elphrona, Luke’s not only echoing back to a time Ben would recognise as one where he wasn’t just victorious but victorious in a manner that completely de-escalated the threat he was faced with. In visually thrusting Ben back to that memory, he’d ensure that the angry young man (remember how furious he got wanting to blast the Falcon out of the sky? Hoo boy, I bet this was that, but a dozen times more enraging) would focus his fury not on the fleeing remnants of the Resistance, but Luke and Luke alone. A ghost Ben could never harm…only be taunted by.

For all the allure The Rise of Kylo Ren represents as a definitive telling of just how Ben Solo fell from Light to Dark, so far this revelation about Luke”or reminder really, of his wisdom, his sense of humour, and indeed his mastery of the Force”is perhaps its most striking lesson. All it took was some quick thinking and a pointed sartorial choice.