The Rise Of Skywalker Is A Celebration Of Star Wars’ Old Expanded Universe, And Its Greatest Repudiation

Star Wars: The Rise of Skywalker, whether you ultimately liked it or loathed it, is a wildly messy movie. There is so much going on, so much nostalgia overload, it’s a testament to Star Wars‘ best and worst excesses. It is sound and fury, and only occasionally does it signify something, but also makes it remarkably in line with Star Wars‘ pre-Disney era, and the Expanded Universe that came before it.

If your primary relationship with Star Wars up to this point was the movies, or the tie-in media that’s developed around them since Disney purchased Lucasfilm, then yes: The Rise of Skywalker is bordering on unholy level of spacebound absurdity. Palpatine’s back, and no one’s going to tell you why beyond that.

There’s a secret planet of the Sith where all these cultists hang around cloning Snokes and presumably ironing those evil robes they all wear. Everyone’s secretly related to one another to varying degrees, or part of a destined Force doohickey, or perhaps, if they’re lucky, both. Generations of new heroes and villains are forced to deal with the dredged up messes of the heroes and villains that came before them, in a seemingly endless cycle of Light vs. Dark, Rebellion vs. Empire, Jedi vs. Sith hysteria.

Also: everyone you remember from the old stuff is here, and then some.

If you grew up reading the likes of The Crystal Star or , however, Rise‘s excessive indulgence is like, a Tuesday. Hell, it might even be even more boring than a regular Tuesday.

The Star Wars Expanded Universe, much like Star Wars in general, was a project both paradoxically dumb as hell and yet also a grand, admirable achievement in worldbuilding and adventure. For decades, in books, comics, and games, every detail about the Star Wars universe, its far-flung past and even further-flung future, was fleshed out and forced to weave a sometimes incredibly inelegant dance to make it all line up. Anything was on the table, stretching the foundations of what Star Wars could be, and what different aspects of this world meant to the people and creatives who loved it.

You’re a starfighter fan? Cool, here’s the excellent X-Wing books, laser-focused on the military and political battles of a post-original-trilogy world, spies and pilots and deadly dogfights among the stars. You like the Jedi? God, where to start.

There’s the ancient adventures of the Knights of the Old Republic, Dark Horse’s frontline examination of the prequel trilogy at war in the Republic: Clone Wars comics, Luke Skywalker’s quest to carry on his masters’ legacies in the New Jedi Order series, or even the exploits of Cade Skywalker, haunted by the destiny of his bloodline (literally, Luke’s force ghost would show up and chide him for doing space drugs) in the future of Star Wars: Legacy, which imagined a resurgent Empire over a century after the movies. 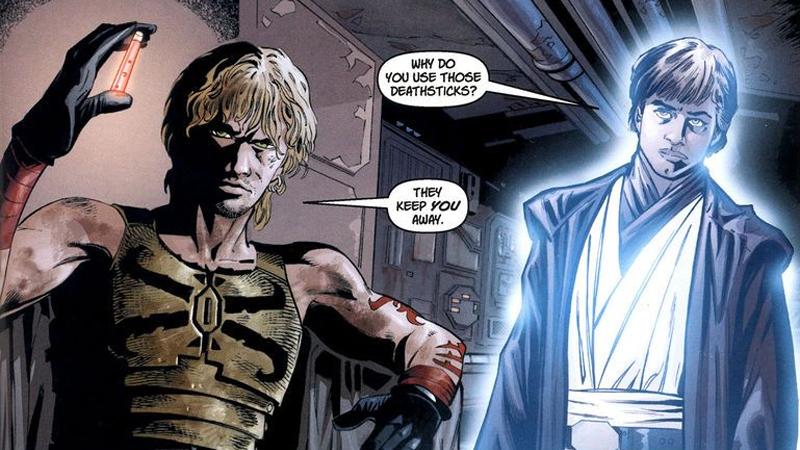 That Cade Skywalker factoid is another example of one of the Expanded Universe’s joys. The wide remit to tell almost any kind of story within the realm of the galaxy far, far away meant that what we knew as Star Wars could be both compellingly grounded and yet also frequently get weird as hell. The EU was a messy, messy thing”everything flung at an interstellar wall all at once, and what didn’t stick was often flung at the wall again anyway.

For every Grand Admiral Thrawn, there was a Yuuzhan Vong. For every Mara Jade, a Thrackan Sal-Solo. Part of the fun of growing up with the Expanded Universe was that you were never quite sure what you were going to be getting into with a new book or comic.

Was it going to give you the Star Wars story you never knew you wanted, some deep, compelling insight into the lives of these heroes and villains we knew and loved, or were you going to get Kevin J. Anderson’s Jedi Academy trilogy?

What made it work there”work being a diplomatically loose term in some regards”is that the old Expanded Universe had literally decades to establish its characters, worlds, and conflicts. It had so much time to build up and, well, expand, to bring us enough uncomfortably detailed and regularly outlandish backstory that by the time you’re deep enough into it, the fact that Emperor Palpatine has more clones than you can feasibly count or that planetkillers just pop up every five seconds just becomes background radiation that has already completely saturated your body.

“There’s a crazy Luke Skywalker clone and his name’s Luuke? Sure, got it. Chewie’s had a moon thrown at him? Aww, rough deal, least he ain’t gotta fight those spiky alien invaders from another galaxy any more though.” The absurd fannishness of it all, and the time it took to really flesh out this mania, is part of what made the Expanded Universe such an admirable feat in the first place. It was silly. It was occasionally incredible. It was often quite bad. But it was always gleefully, unabashedly Star Wars. And The Rise of Skywalker is proof that it would never have worked on screen. 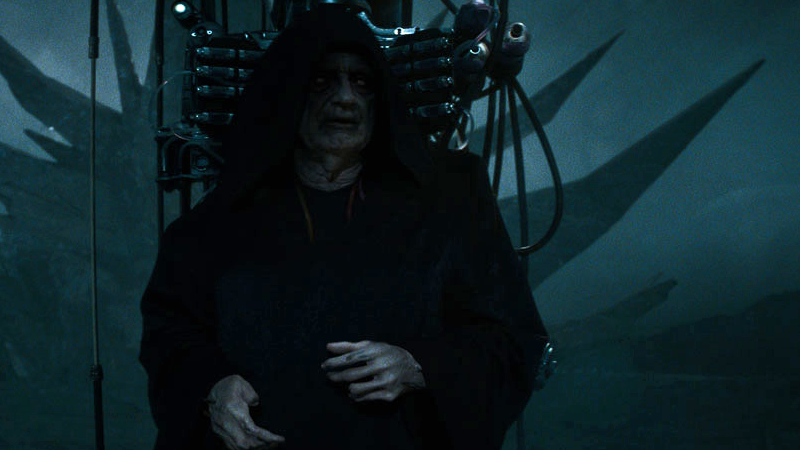 The Star Wars sequel trilogy as we know it, and the new expanded universe that has grown around it, hasn’t really had the luxury of time”it’s only existed for nearly six years at this point. The growing pains as it moved toward a movie as over-the-top nostalgic and fanservice-forward as The Rise of Skywalker meant the inevitable exposure of what would’ve been some of the weaknesses if the old Expanded Universe hadn’t been left as “legends” and had been brought to the silver screen, warts and all.

That it’s a story with so much going on that you need a library’s worth of accompanying tie-in fiction to start understanding it all is a simple ask if you’ve been following book series and comic runs for years; it’s a much tougher one to demand of a movie audience whose primary experience with the franchise would’ve been just the movies themselves. A reliance on cameos and callbacks, on familiar material to prop up the new, not giving yourself a chance to breathe between references and shout outs might work in a novel (or a series of them). But crammed into a two-hour movie that also has to try and tell its own story? It makes for an almighty, grandly-scaled mess, where great ideas have to sit mushed alongside absurd excesses.

There’s a reason Poe Dameron’s exasperated face as the words “somehow, Palpatine returned” fall out of his mouth has become a meme after Rise“the tiredness of it with the already inherent absurdity of Palpatine being back is too fun (and too ridiculous) for it not to have become one. But it’s the sort of “oh, not this shit again” kind of goofiness that the old Expanded Universe would’ve thrived on at its very best and paradoxically at its worst heights of navel-gazing nepotism”that tightrope of being completely bonkers and yet endlessly compelling. The Rise of Skywalker might feel out of lockstep with the two sequel films that came before it at times, but in its best and worst moments, it feels like a reminder of just how previously indulgent and overbearing Star Wars canon had gotten before its culling. 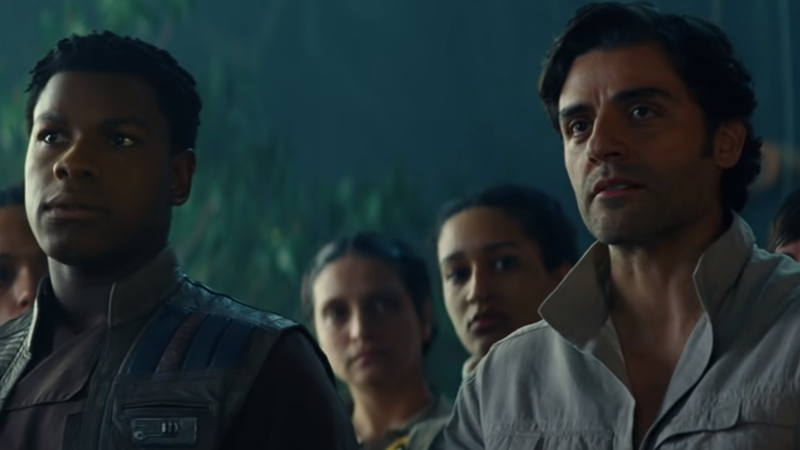 The faces of people rightfully tired of dealing with this shit again. (Image: Lucasfilm)

Years after it was first decided that the Expanded Universe had gotten too wild, too sprawling to ever be considered as the path for a Star Wars sequel film trilogy, to essentially get a culmination to that trilogy that emphasises both the EU’s most vivid pleasures while laying bare its greatest flaws is perhaps an ironic thing. But it’s also a reminder of the inevitability of this sort of franchise-based storytelling. You can pare it all down and reboot it, sure”but the longer these worlds persist, the more stories are told in them, the more intertwined and expansive they become, something as gleefully fannish to its own detriment like Rise can only be the inevitable conclusion.

It’s messy, but it’s not always a bad thing. Sometimes it’s just a reminder of how deeply, joyously silly these worlds can get”and in Star Wars‘ case, no matter how serious we can all take it at times, that it might be one of the silliest worlds of all.