The Weird But Memorable Sidequests Of Yakuza 0

I loved Yakuza movies growing up, and the Yakuza series reminds me of the best of them. I actually enjoyed films like Sympathy for the Underdog, Battles Without Honour and Humanity, and Sonatine more than their mafia-themed cousins we have here in the west. So when Luke wrote his great review of Yakuza 0, I put it on my backlog and knew I had to play it. It took me a lot longer than I’d hoped to finally get to the game, but I’ve been hooked since I started.

Yakuza 0’s story is incredible and feels like a continuation of the Yakuza films I revered. Many of the protagonists are forced into their criminal lifestyle and seek a way out. That’s why despite dwelling in the seedy underbelly of the gangster underworld, their code of honour is so important to them as it helps them cling to their humanity. 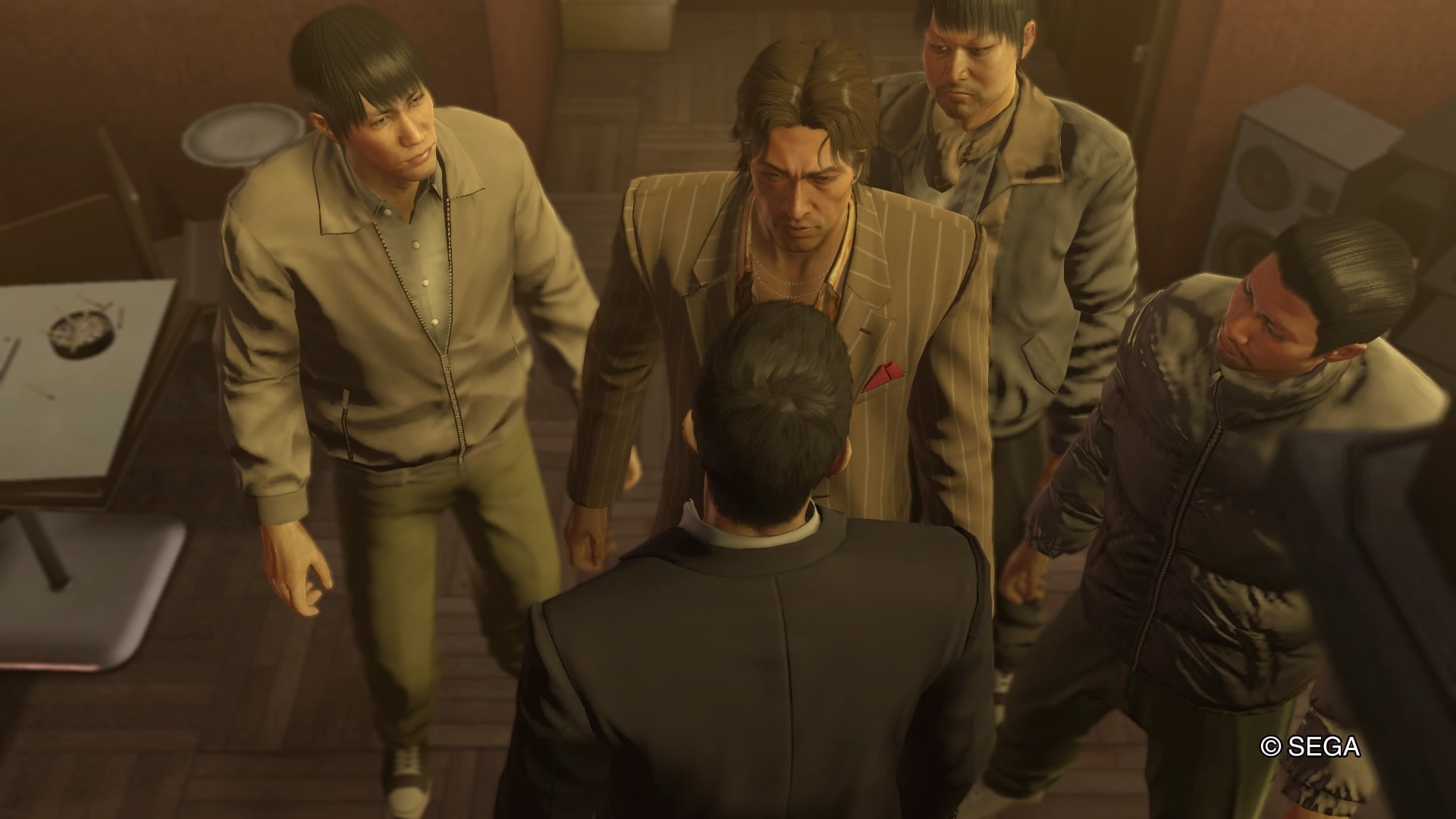 To that end, Yakuza’s dedication to its world-building is manifold and replete with details. There’s nothing that better demonstrates this than its sidequests. There are two protagonists; Kiryu’s journey opens in Kamurocho, which is based on the real life Red Light District in Tokyo, Kabukichō, while Majima’s takes place in Sōtenbori. Kamurocho is bustling with activity, and I don’t just mean the random hooligans who basically act as free cash flow every time they try to fight you. There are people struggling to make a living, find love in misplaced fantasies, and eke out a small space to call their own, even if it’s with swords and pistols.

In another sidequest, Kiryu has to help a teenage couple break free of a sordid underwear selling circuit and convince their ringleader to stop imposing her will on others. 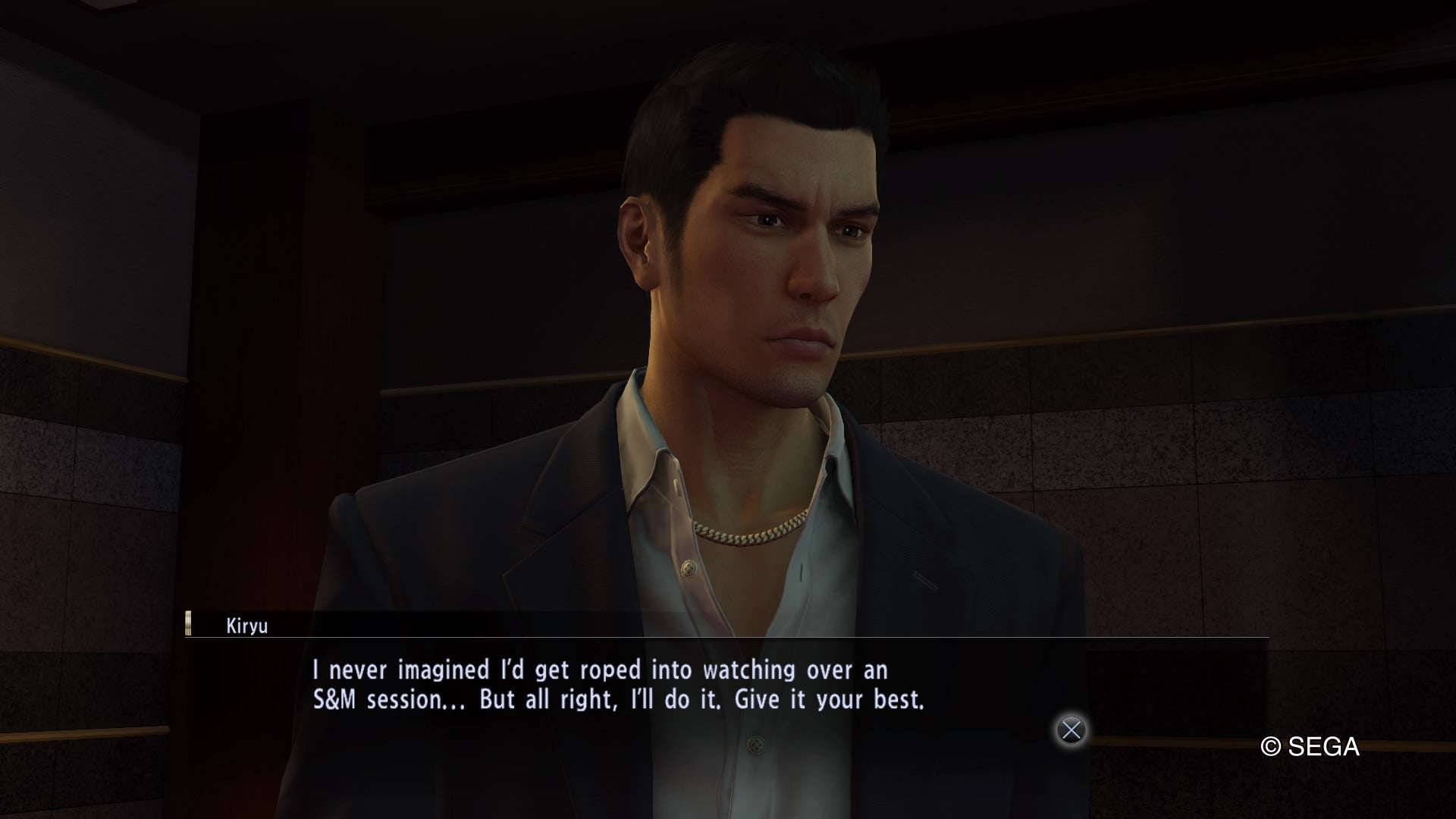 Majima’s sidequests in Sōtenbori are equally bizarre. Majima has to pretend to be someone’s boyfriend, rescue someone from a cult, and play penpals with a woman he meets in the public bathroom via graffiti before getting caught up in a fraudulent scheme. There’s also a strange guy called Mr. Libido who likes to dance passionately in his underwear. If this sounds weird and creepy, the protagonists would agree with you, as even they comment on how weirded out they are by the situations they’re thrust into. But it also highlights how committed Yakuza is to its Red Light lore. Whereas most people are seeking to exploit or take advantage of the worst of human nature, Kiryu and Majima often act like the Yakuza version of Robin Hood, running to the rescue. Their explosive fists carve out just a little dose of justice to those who’d prey on the vulnerable. 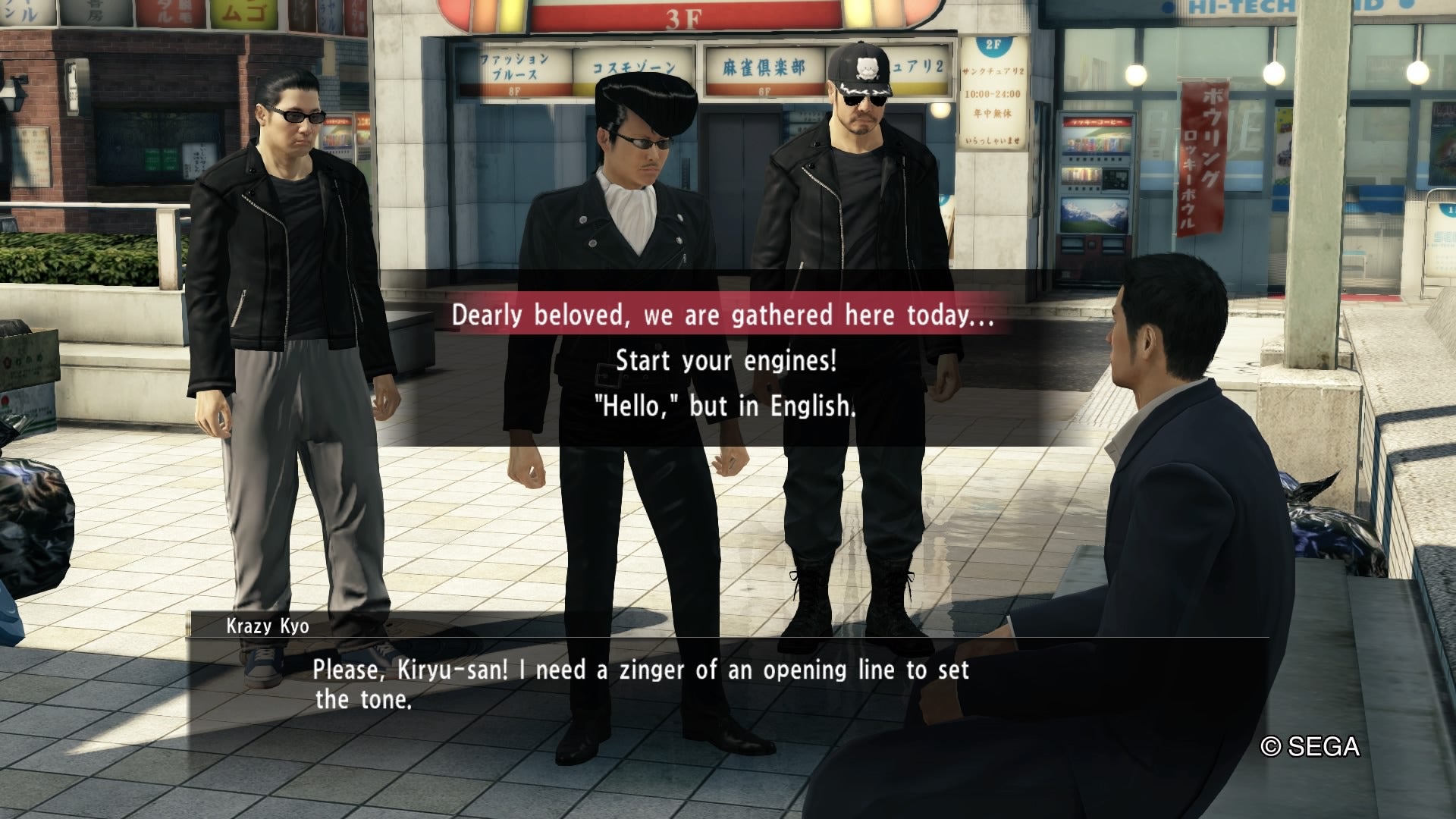 But not all the sidequests are so lurid, even if they are equally quirky. One of Kiryu’s more amusing sidequests involves a thug with a bird-like hairdo who bumps into you and can’t make up his mind whether he should be polite and apologetic, or rude and belligerent. Follow him to the Theatre Square, and you’ll spot a group of fans awaiting a popular band that do the “Yanki” style. You’ll spot the hooligan from before, whose name is Krazy Kyo. He reveals he’s part of a band that jokingly dressed up in the Yanki style then suddenly became popular due to their new personas. They have no idea how real Yankis (which are kind of like delinquent youths) act and need to get tips from Kiryu so that they don’t disappoint their fans. This essentially comes down to you acting as a Yakuza coach and teaching them how to react to their fans. Their impromptu lessons on how to more authentically represent gangsterhood are in part poking fun at musical boy bands that masquerade their “toughness,” but also show how real yankis need role models they can relate to as well. 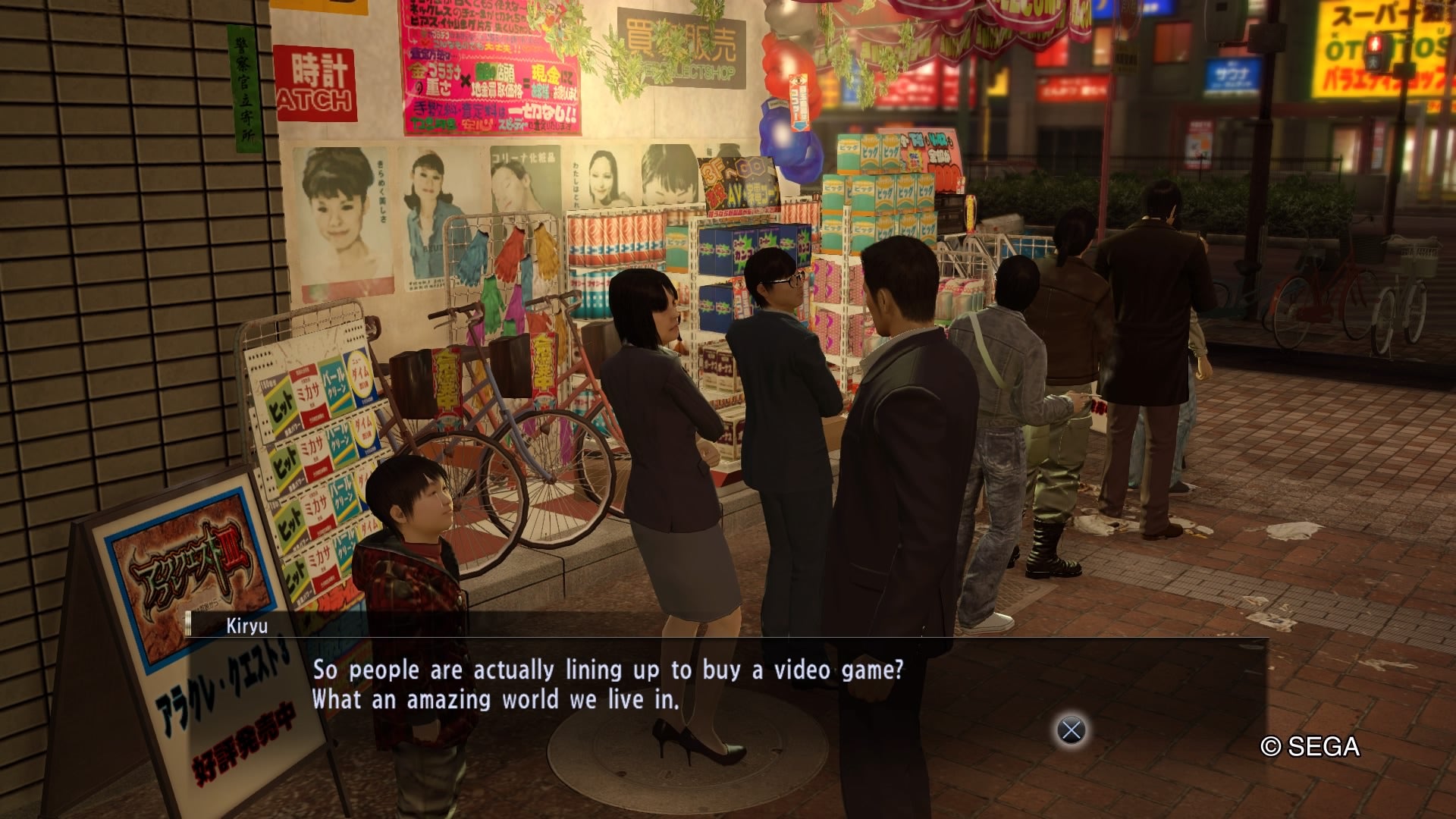 My favourite sidequest involves a kid named Akio who is waiting in a long line at a store to buy a game he’s wanted, Arakure III: Quest For The Quantum Quill. It’s sold out everywhere else, and there’s even a guy who skipped work to buy the game here. It’s an obvious nod to Dragon Quest III, which also came out in 1988, the year Yakuza 0 takes place. Akio saved up for the game and even tells you he can’t wait to read the manual on the way back home. I felt sad because that kid used to be me, eagerly reading the manuals to learn more about whatever game I bought. I hate the fact that most games no longer have physical manuals and when they do, they’re usually barebones, lacking the art, backstory, and tip sections I used to be entranced by. But Yakuza 0 is all about 80s nostalgia and lush game manuals were a big part of that for me. 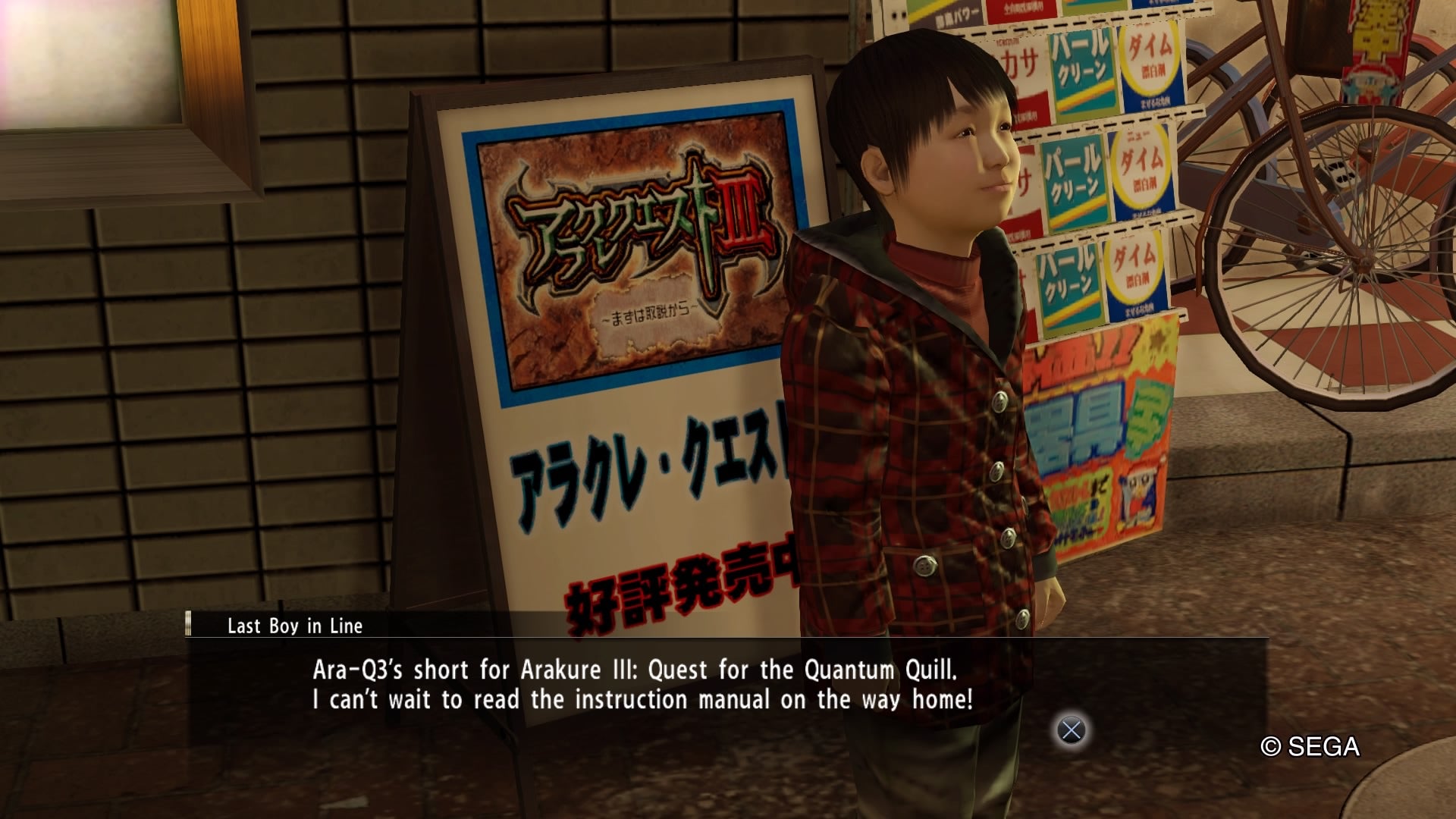 I went about my business again, gathering information on a real estate company, when I ran across Akio again. This time, he is being bullied by a high school kid who takes Arakure III from him. This pissed me off for personal reasons. While this is 80s Japan, the neon backdrop and crowded streets reminded me a lot about my own childhood living in Seoul for two years in the 80s. There was one time I had saved some money so I could buy a meal at a fast food restaurant that I’d long wanted to try. I was so excited and giddy, rushing to the restaurant. On the way, two high school kids stopped me. One punched me in the stomach and the other demanded I give him what money I had. It felt unfair and I didn’t give it to them right away. They hit me again, so I handed over the money. The one who took the money patted me on the head, asked if I was ok, before they departed. It was over within a few minutes, but all these years later, I still carry that memory with me.

In Yakuza 0, when I saw this high school student bully a young Akio, that memory suddenly came back to me. I chased the high school student down the alleyway, caught up to him, and when he gave Kiryu lip, handed him a smackdown. I won’t lie. It felt good. Unfortunately, this hooligan had been robbed by a gangster who wanted the game too (Qui Gon Jinn’s words, “There’s always a bigger fish,” came to mind). Kiryu has to hunt down the gangster, beat him up, and demand the game back. 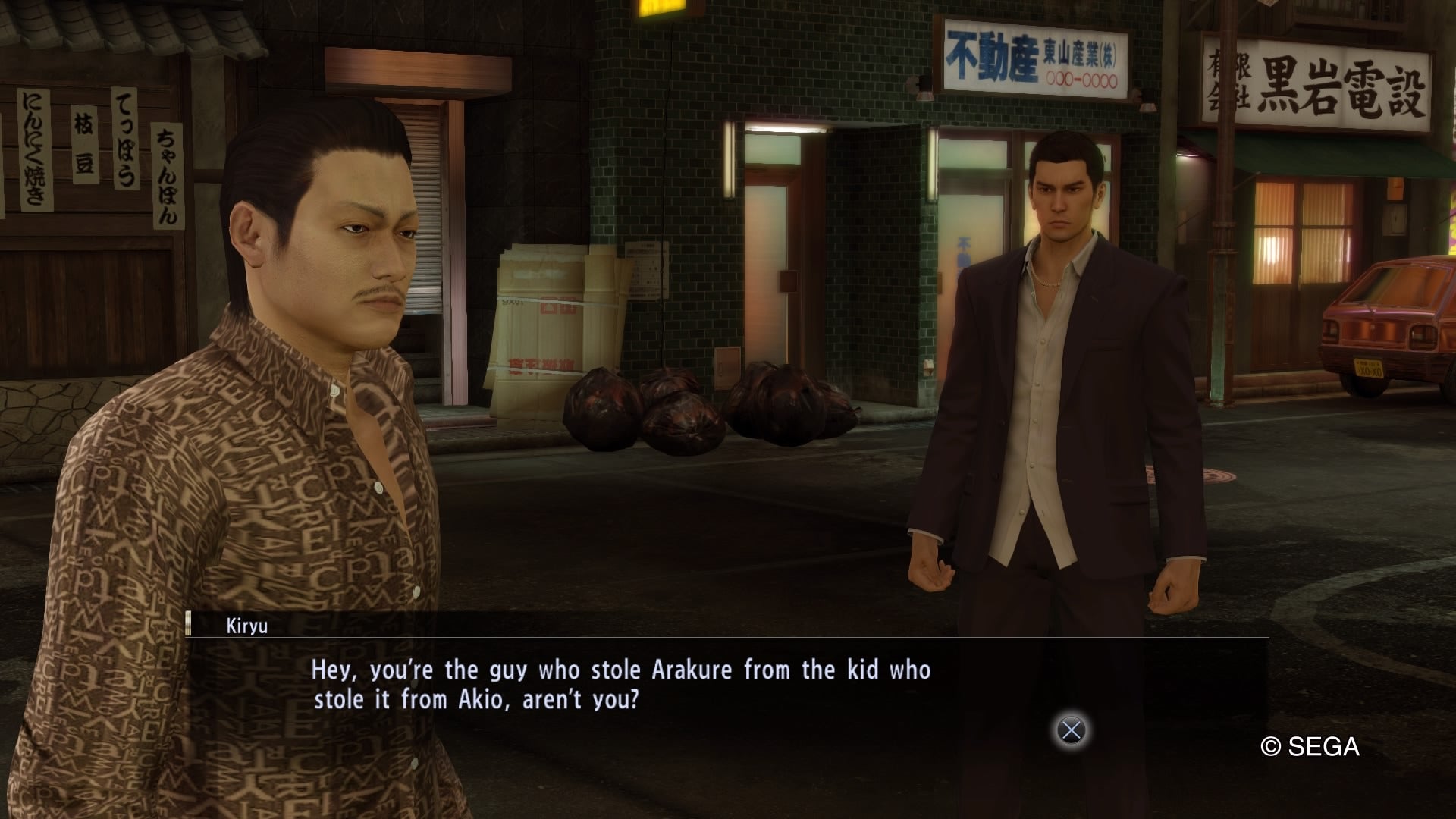 Events get more complicated after the gangster tells you that a low-level Yakuza just took the game away from him. At this point, Akio is in despair and thinks it’s too much work to get the game. But I wasn’t going to give up and neither was Kiryu.

We finally find the Yakuza thug and demand the game back. No surprise, he is defiant and even takes out a gun to defend his right to the JRPG. Because I went in unprepared, it was a harder fight than I’d anticipated. I got shot twice and had to heal myself before finishing him off. After defeating him, the Yakuza thug pleads with you for the game. He needs it for his son who eagerly wants the new RPG. To make matters more desperate, they’ve become estranged ever since his wife left him.

Kiryu responds to the negative, explaining that giving him the game is impossible because, “Long story short, you took Ara-Q3 from a wannabe punk who took it from a high school bully who took it from the last boy in line who bought it in the first place.” 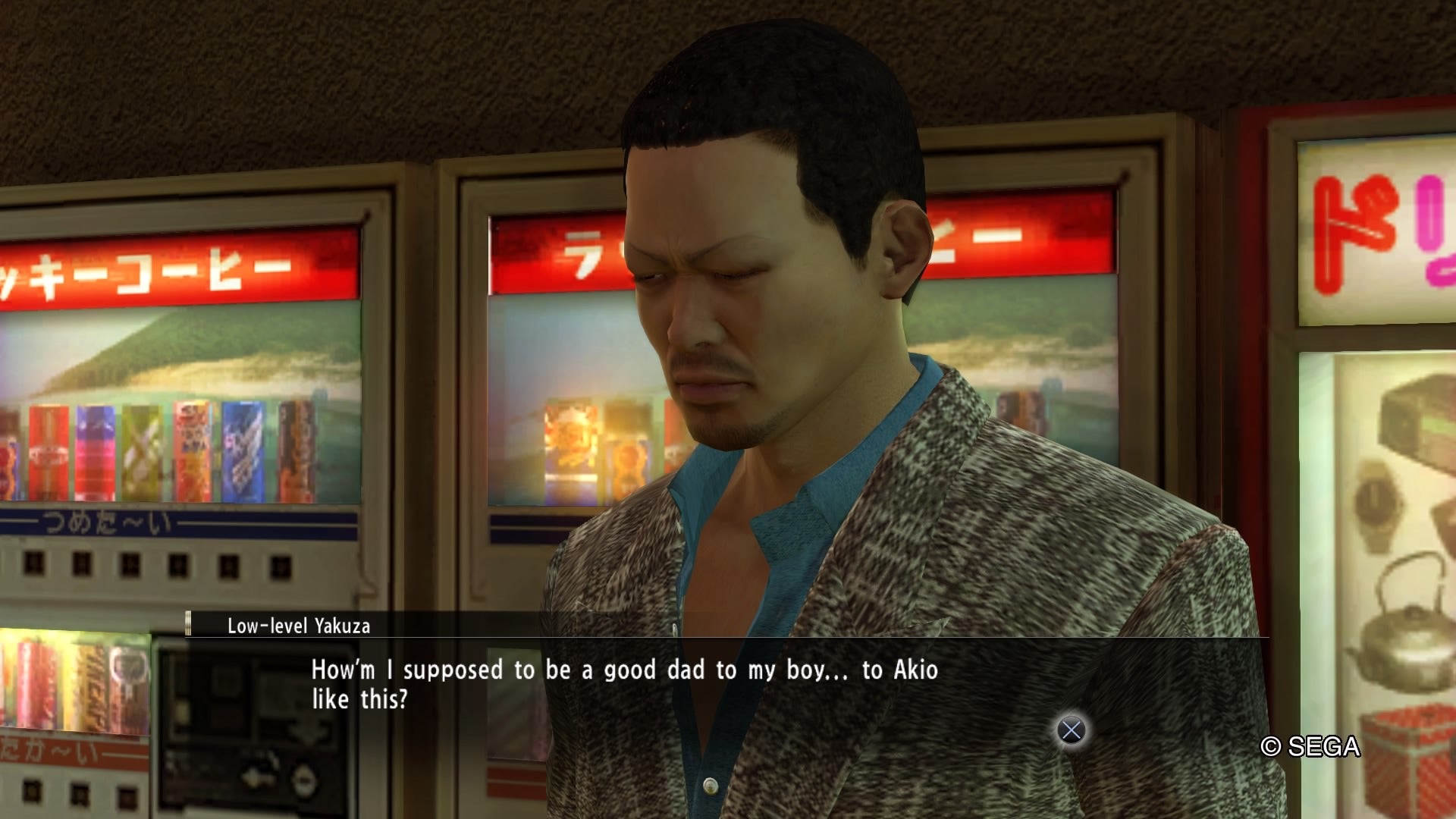 When the low-level Yakuza realises the game actually belonged to another child, he is disgusted with himself, wondering how he could be a good father when he’s stooped to such a low level. But, as Yakuza often likes to dig at the emotional strings, it turns out the son that he wants to get the game for is none other than Akio, the kid who bought the game in the first place. It’s an unexpected cycle that affected me more deeply than I thought it would. In the span of a few minutes, I went from wanting to avenge a childhood wrong to seeing how a game (Arakure III: Quest For The Quantum Quill) brought a father and son closer together to wondering if there was any way I could get my hands on Arakure III myself. 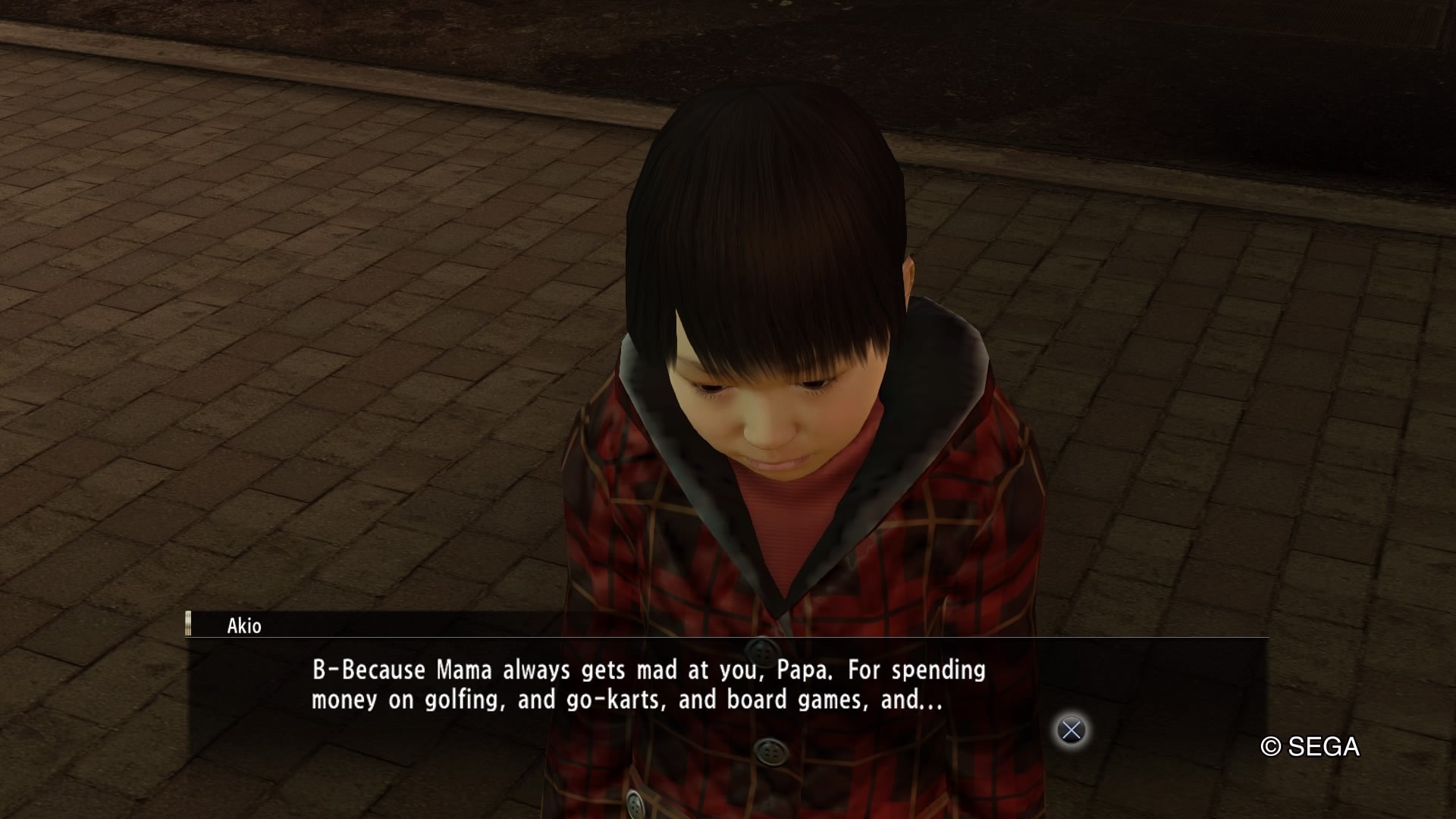 That personal depth in the sidequests is matched by the variety. After completing the sidequest, I played Space Harrier, found Scotch whiskey and expensive champagne for some homeless people who had critical information I needed, ate Korean kalbi to rejuvenate after fighting too many thugs, then helped an eccentric film director shoot a commercial as the producer was boycotting the production thanks to a dispute.

Ultimately, what I’ve enjoyed most about Yakuza 0 is that I’m not just watching a continuation of those Yakuza films I used to love. I’m getting to live them. Many of the character’s tragedies hinge on their realisation that they can have no redemption, despite executing their transgressions with as much honour as they could muster. They’re gangsters with a heart of yen, and their conflicted ethos is what makes the game so compelling.