There Was A Cancelled Ty The Tasmanian Tiger TV Show 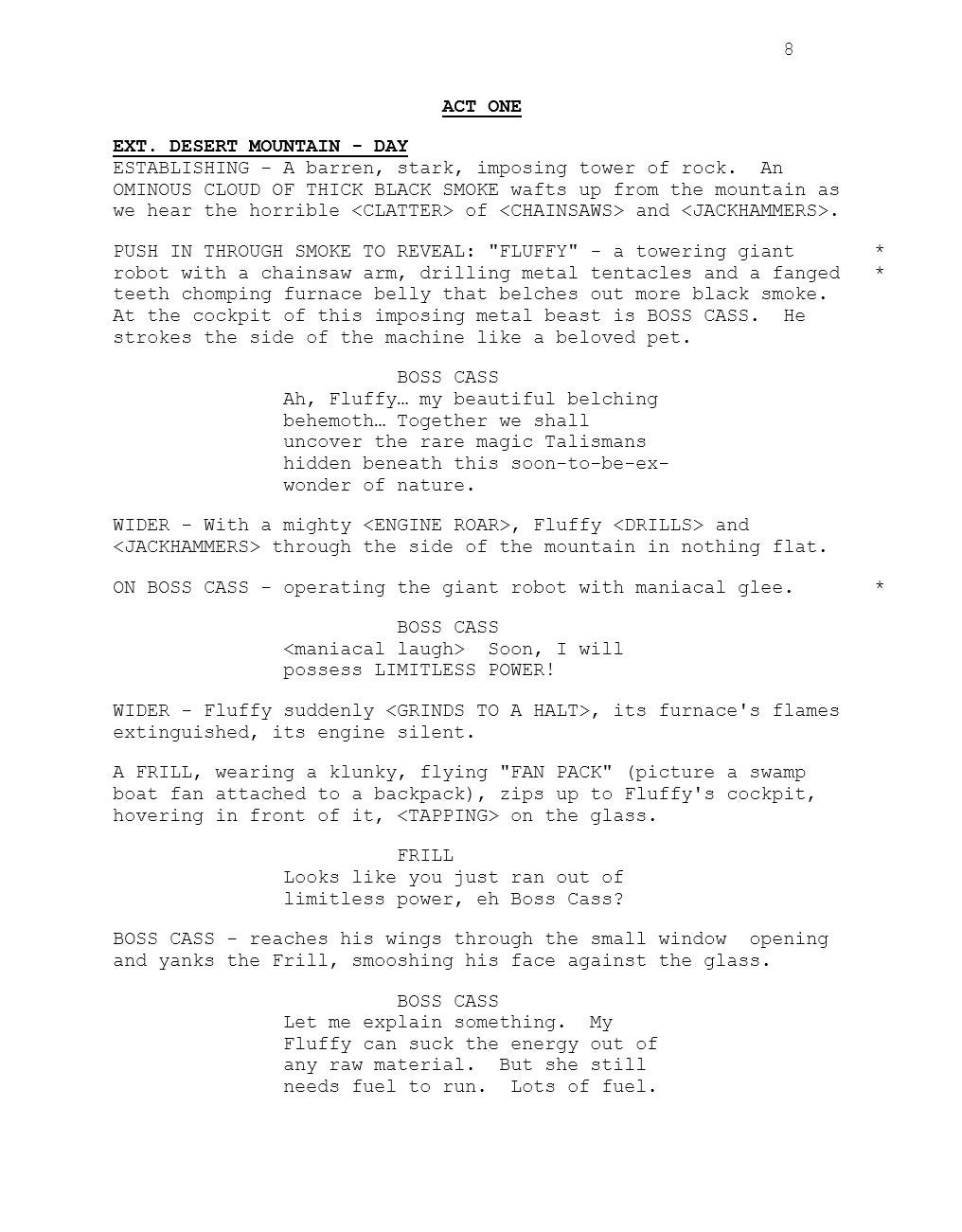 Ty The Tasmanian Tiger, for an ocker platforming game from Australia, has had a pretty good life. It was well received at launch, and the remaster had the honour of being the highest rated game on Steam for a short while.

But the story goes much further than that. The game was actually optioned for a TV series by Film Roman, the studio responsible for animating 24 seasons of The Simpsons. Two scripts were made, some of which you can see today.

Going through my old notes in preparation for a podcast tomorrow and am finding so much stuff I had forgotten about. I wrote one of the TY scripts for the TV show pitch for Film Roman with the help of ⁦@LaneRaichert⁩ pic.twitter.com/tAl2eX3nWf

I got in touch with Passfield, who told me that not only were Film Roman interested, but the pilot for the series was written by Marty Isenberg, who worked on Teenage Mutant Ninja Turtles, Ben 10, X-Men: The Animated Series, the BattleTech animated pilot, Spider-Man: The Animated Series, and a TV spin-off of The Adventures of Sam & Max: Freelance Police.

The first act of the pilot episode features the antagonist of the Ty games, Boss Cass, sitting inside a mech suit with a chainsaw. The mech, Fluffy, needs a lot of fossil fuels to run, so the evil cassowary decides to strip mine a mountain: 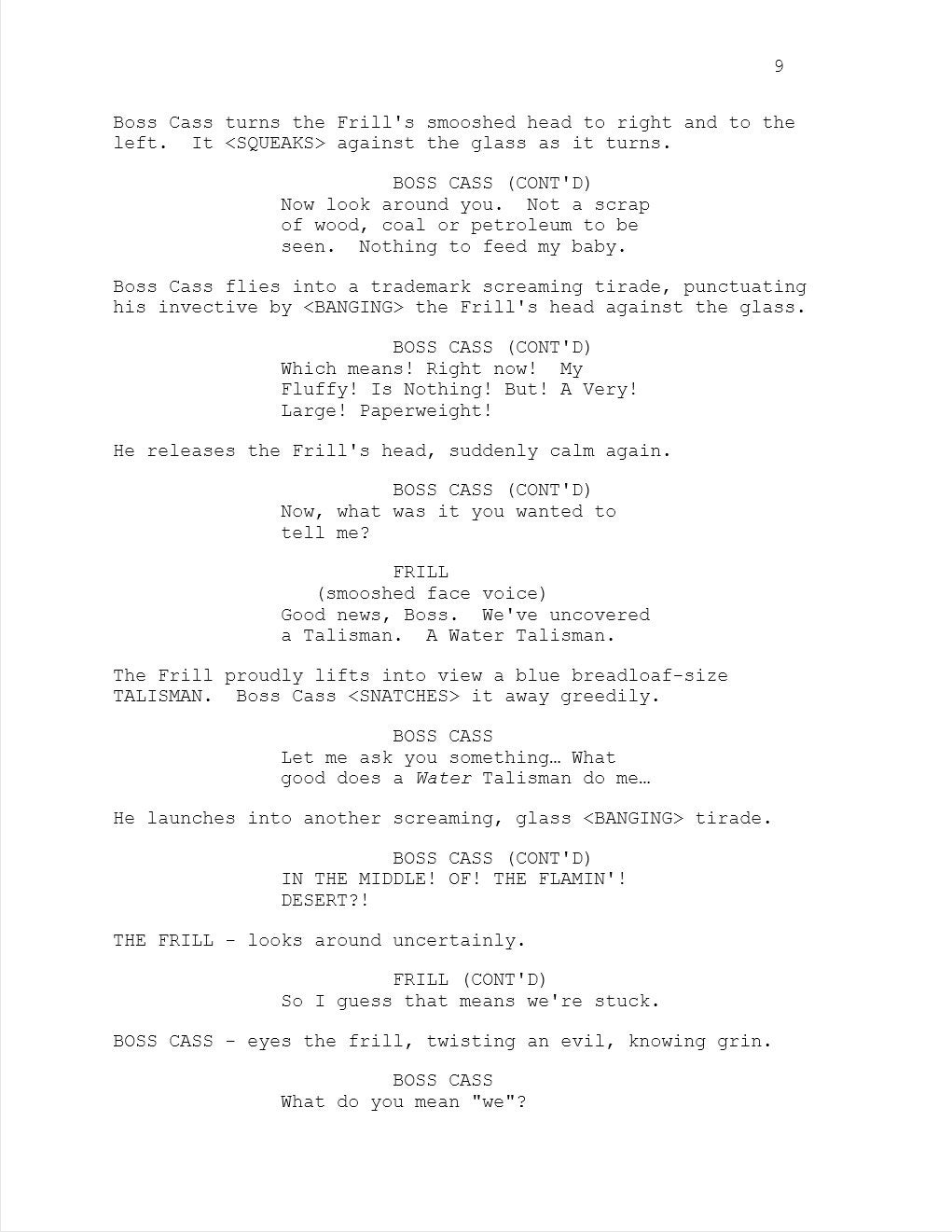 Meanwhile Ty is flying around in his Ty Wing, a vehicle that the TV bible for the series describes as a “what would happen if a B2 stealth bomber and a giant Aboriginal wood boomerang had a child”. It’s basically the way the Burramudgee Bush Rescue – that’s Ty and his offsiders Shazza and Julius, plus the supporting cast – travel throughout the series.

Another episode later in the series, written by Passfield himself, begins with “two CASS ATTACK CRAFT” and a drop ship designed by the cassowary equivalent of Dr. Robotnik. It’s an aerial dogfight, basically: 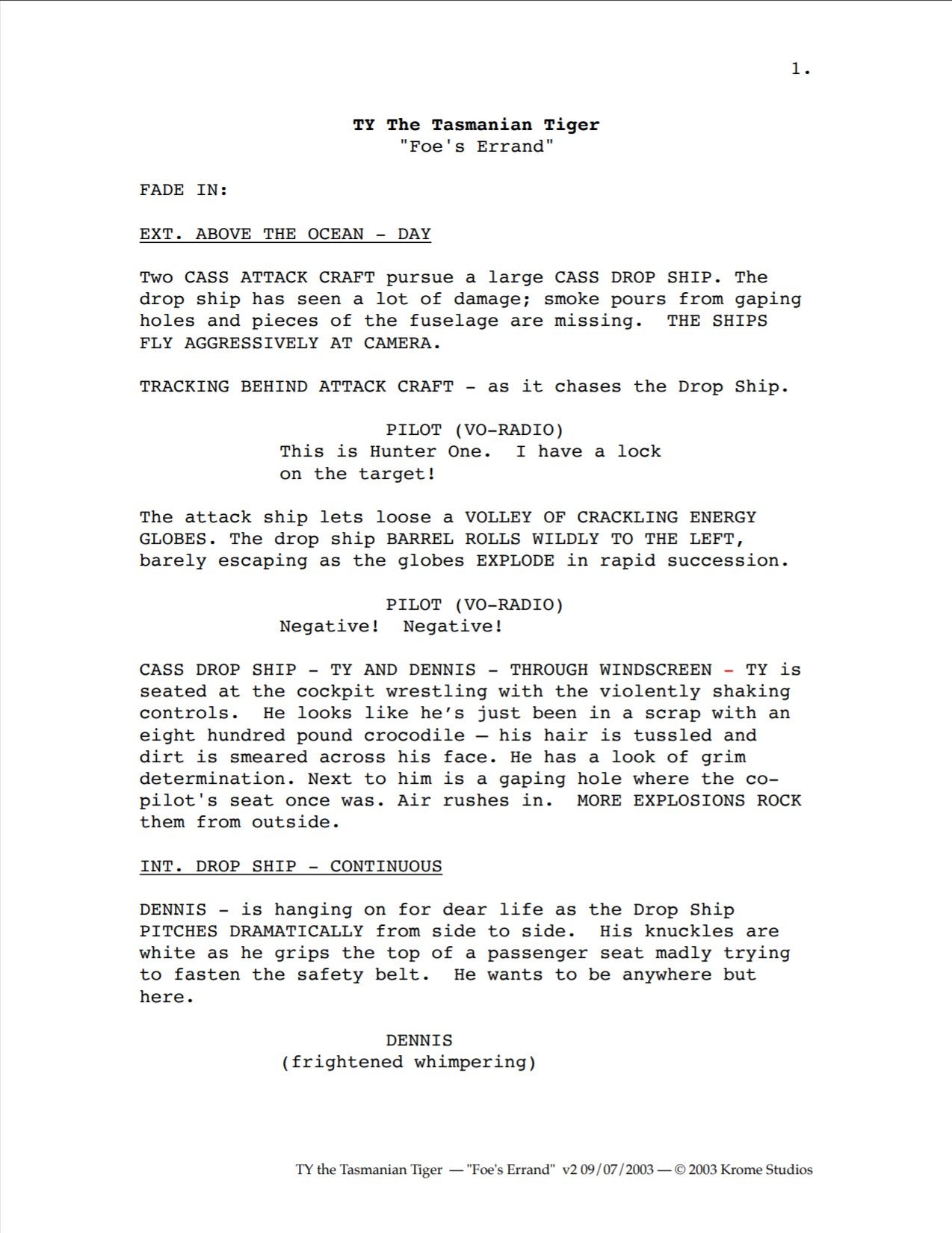 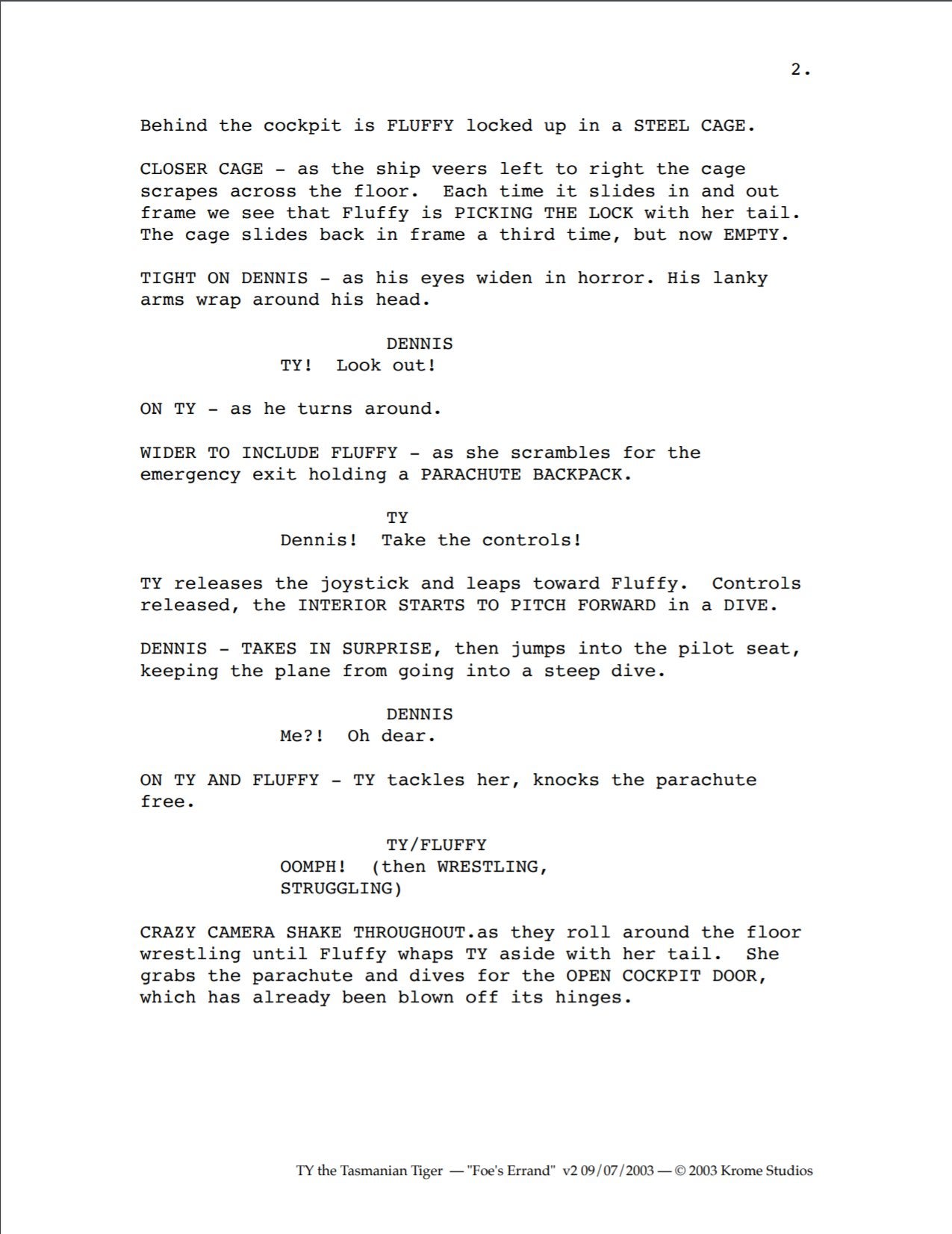 We’re also introduced to the goons for Boss Cass, which are lovingly described as “The Magpie Police”. 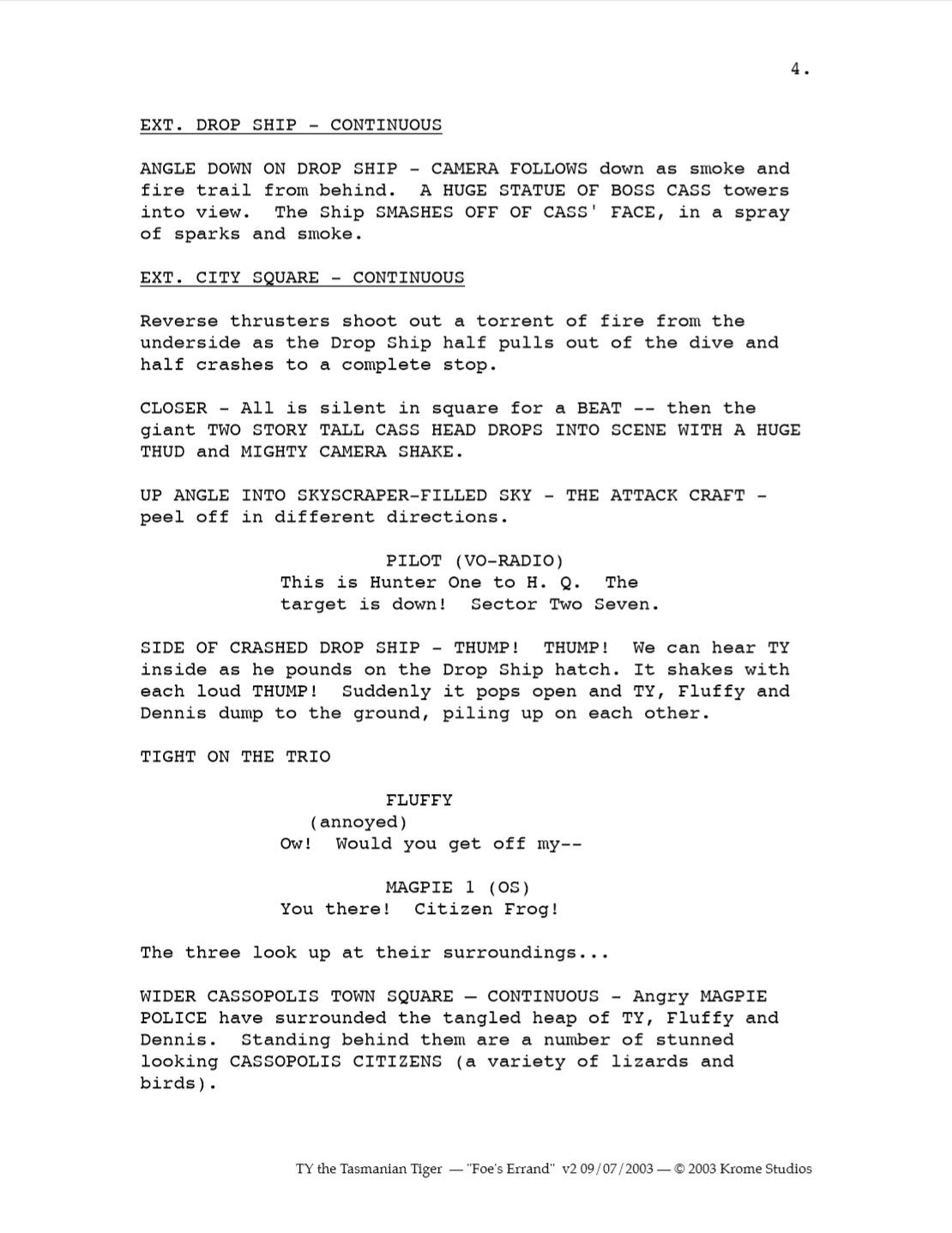 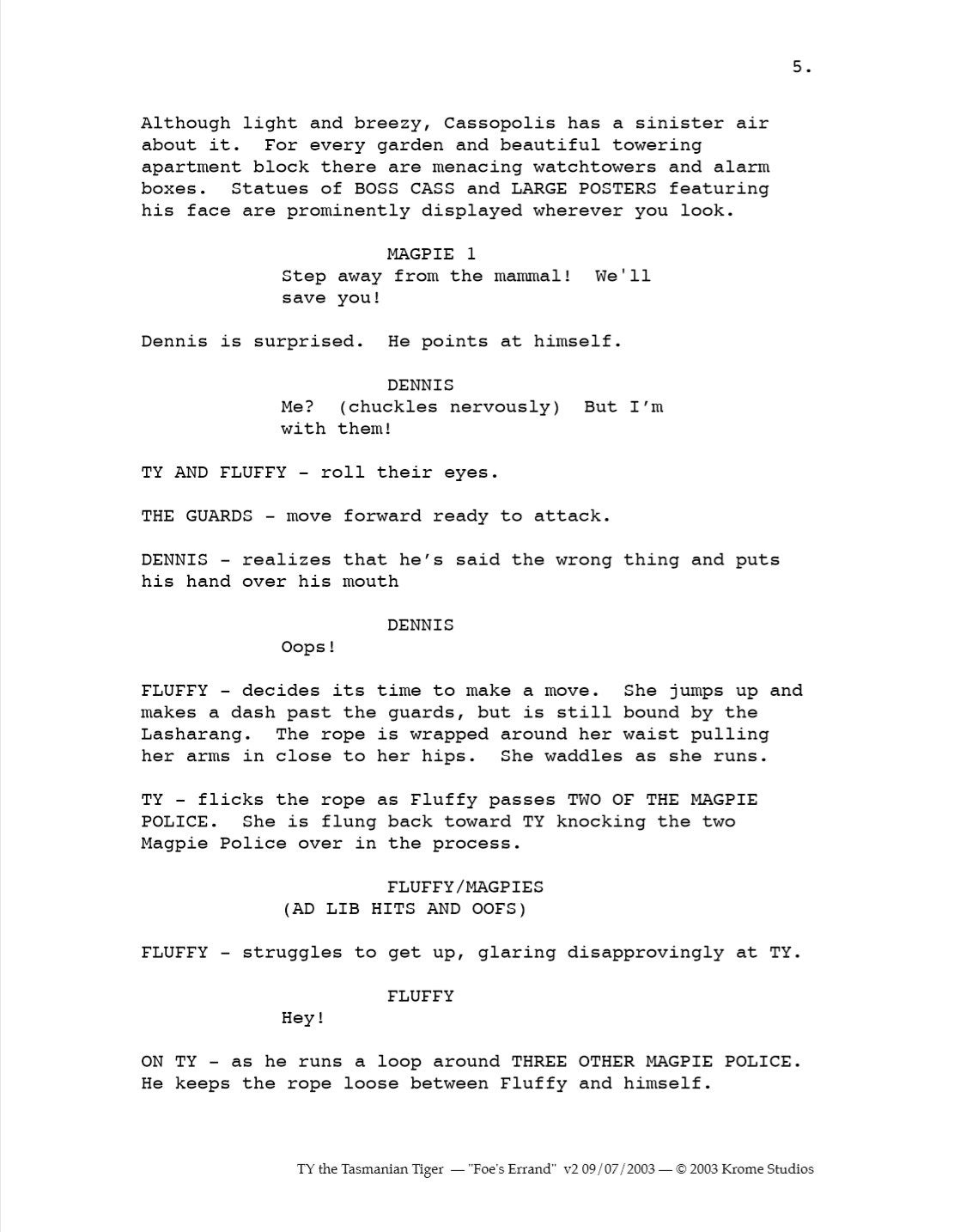 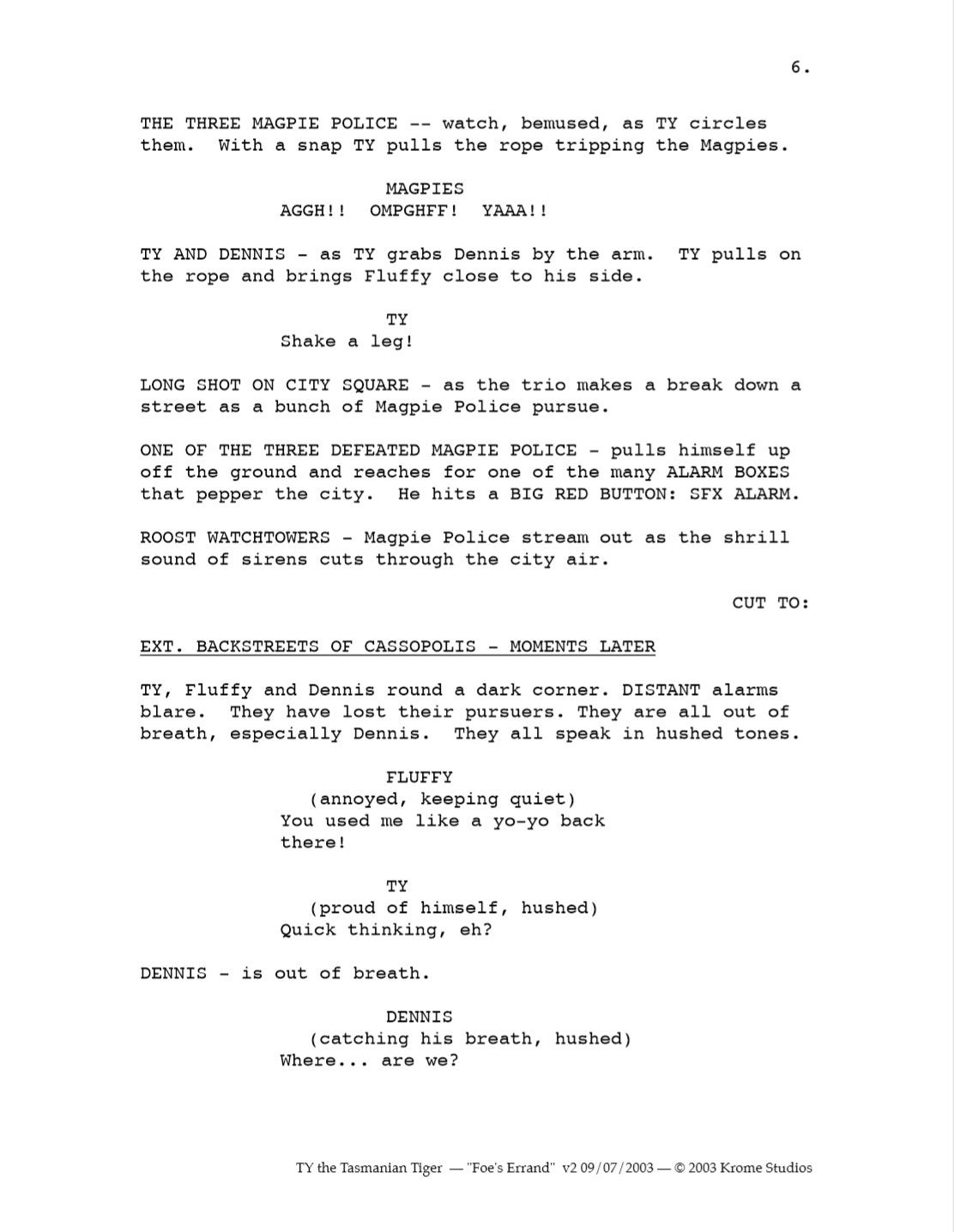 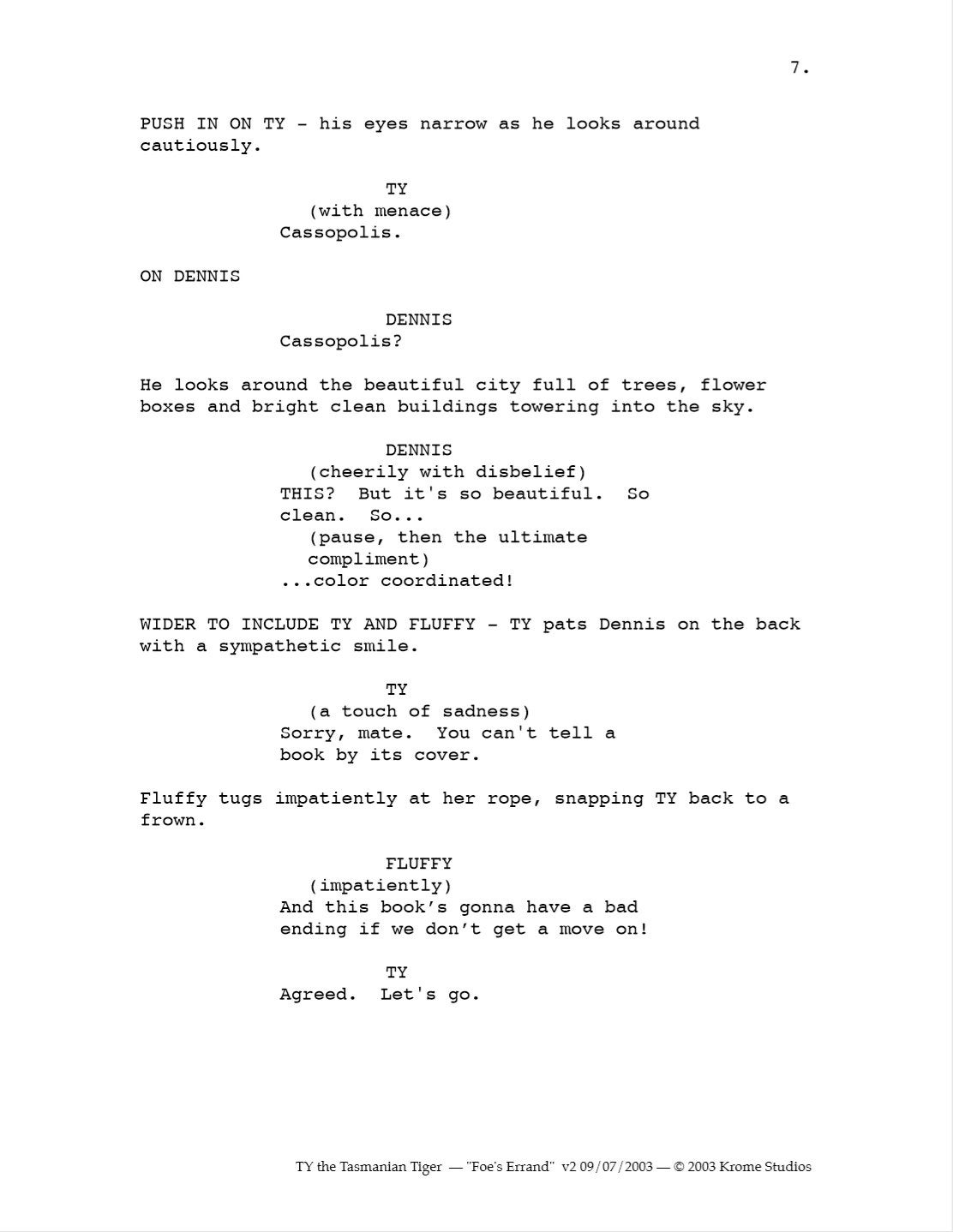 To get a pilot off the ground, the show needs the equivalent of a style guide. Ty’s series has a 21 page pitch book outlining a one line elevator pitch, what other characters will appear in the series, the general arc and roles everyone plays, what the feel and pace of the show would be like, who the franchise would target and what the general aesthetic would be like.

For instance, here’s the character descriptions for Shazza and Maurie: 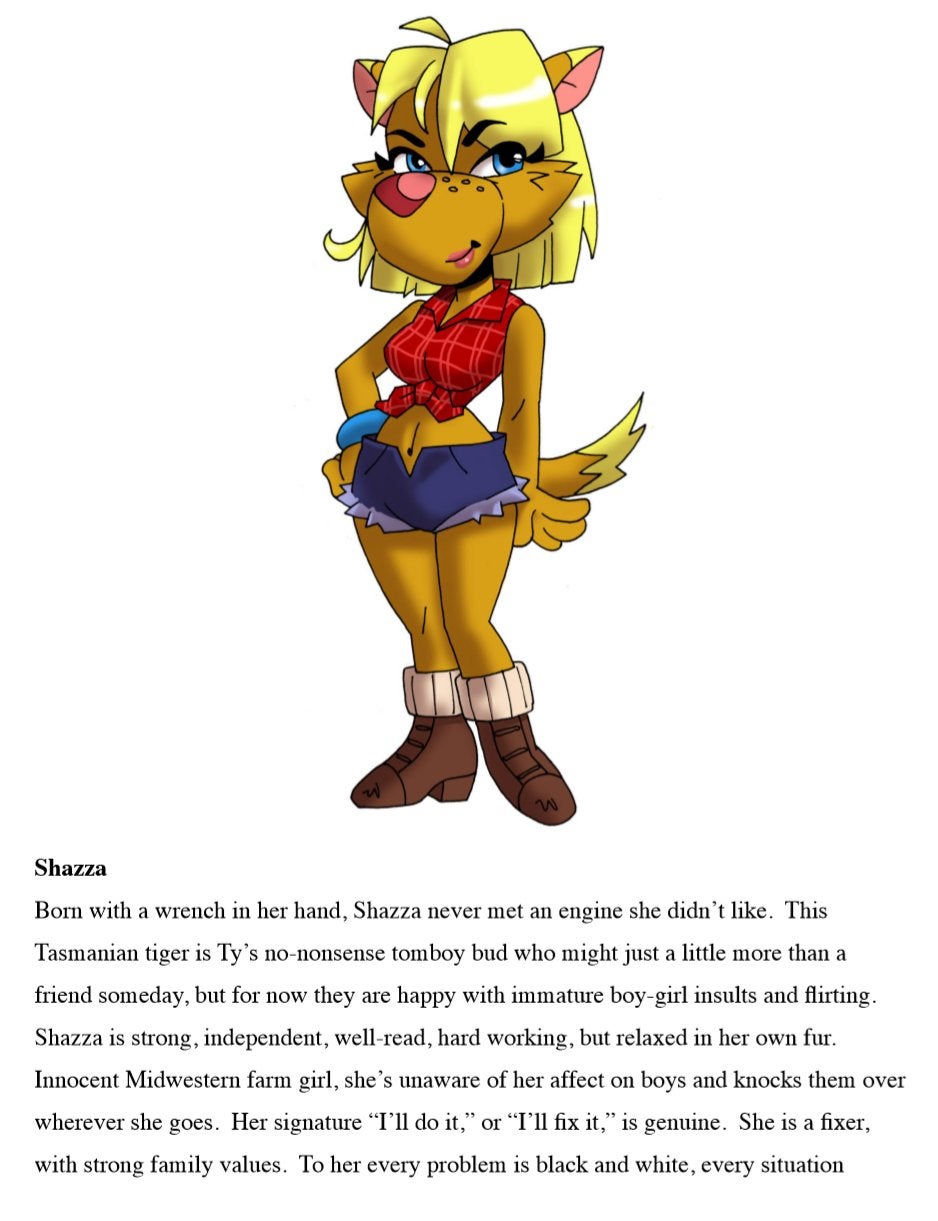 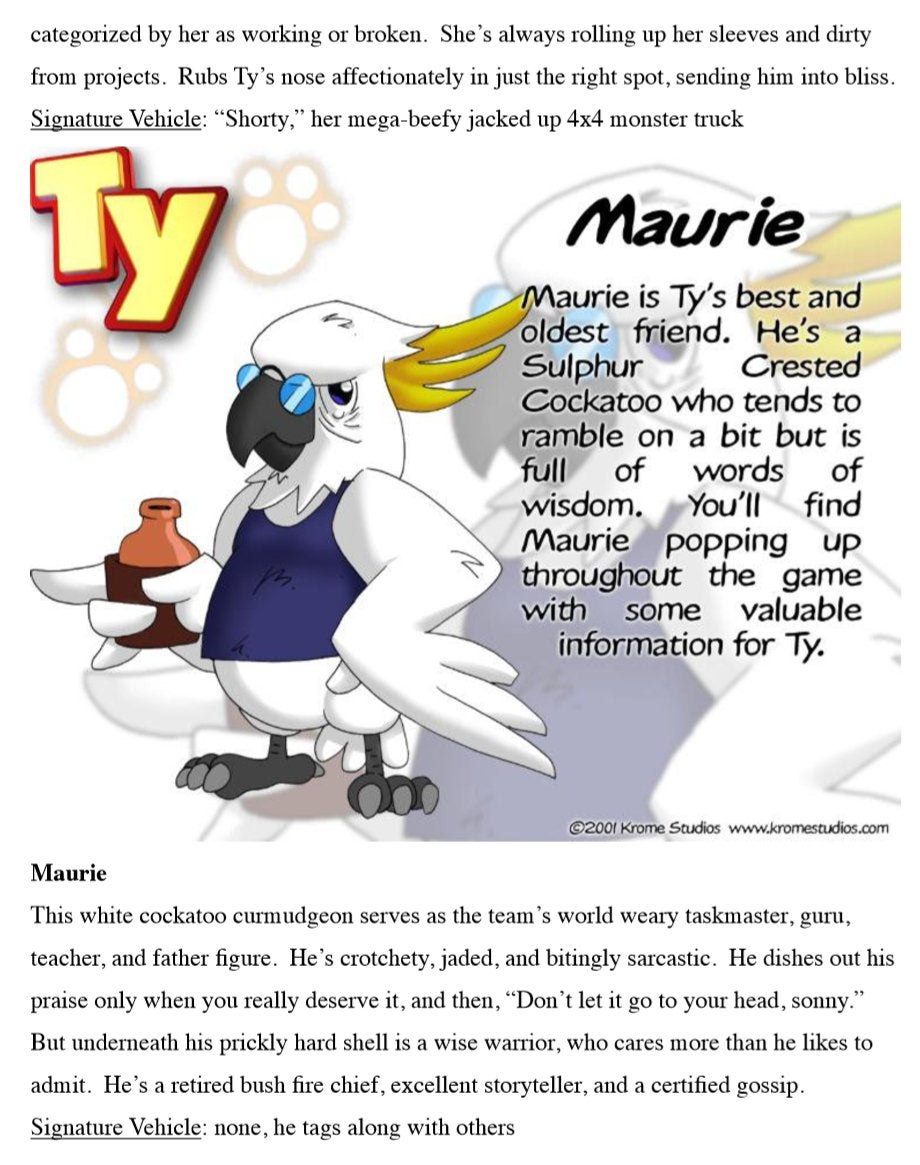 The franchise was to be aimed at 6-11 year old boys, with “positive male role models” and “positive friendship models abound”. But with the the “strong central girl characters” and “the non-threatening nature of the animal-based art design,” Krome believed the series would also appeal to girls in the same age bracket.

Here’s how the TV bible describes the franchise:

Ty the Tasmanian Tiger is pure unabashed modern myth, likable and interesting good guys vs. crazy and colourful villains — all armed and equipped with over the top vehicles and gadgetry. Though Ty and Bush rescue ﬁght to keep balance in the natural environments under their protection, they use cool high tech vehicles and adventurous mechanical inventions as their main tools. It’s as if James Bond worked for the forest service.

Their main enemy Boss Cass also uses high tech vehicles and tools, but unlike the good citizens he is trying to subject and steal from, Boss Cass could care less about preserving the natural balance of things. He’s only interested in himself.

And what the Ty universe would look like in a TV series. The Ty games always referenced the Aboriginal Dreamtime as the creation of Ty’s world, so it’s natural that the Dreamtime and the Bunyip Elders were part of the TV series, too:

Ty and his friends at Burramudgee Bush Rescue are based in a fantasy critter-only version of Australia — koalas, Tasmanian tigers, Tasmanian devils (the originals), cassowary birds, frilled lizards, giant beetles, platypuses, cockatoos, — but their adventures and troubles can take them anywhere in the world. For example, China still exists, but it’s inhabited by Pandas. A trip to the South Pole will ﬁnd villages of well dressed penguins driving about.

In addition to familiar animals that we have on our earth, Ty’s world is also home to some extra fantasy animals, mostly tied to the Dreamtime, the mystical Aboriginal plane which started the world as we know it. Specifically, the populous bilbies are friendly hopping furry animals and the Bunyip Elders, mystical Aboriginal archangels who involve themselves with critter civilisation only when the balance of nature is severely threatened.

It’s an interesting peak into what could have been. Obviously the scripts would have been developed further if the series had gone into full production, but as it was this was enough to get the series optioned,” Passfield said. I tried to contact Lane Raichert, the voice director on all three Ty the Tasmanian Tiger games and developer of the TV show, but wasn’t able to get in touch before publication.

It’s pretty normal for Hollywood scripts and options to be left on the cutting room floor – but the fact that an Australian game made it that far, and one as expressly Australian as Ty, is still incredible.