Comedian Conner O’Malley, who you might have previously seen screaming about Howard Shultz or hosting talk shows from a lake, is back with a new video game-themed parody of New York City rich-people compound Hudson Yards that’s both funny and soul crushing and has already aged me five years.

The video opens with a PS1-style loading screen followed by a live-action O’Malley running around the Manhattan development’s plaza like a video game character in an open world game furiously waving at everyone he sees to collect “Hello points.” Occasionally he talks to non-player characters (NPCs) who give him hints like one about a cool membership tier above Amazon Prime with negative shipping that only costs $US400,000 ($584,061) a year. At one point he calls his wife to wish her “happy wive’s day” to which she responds “Let’s do meal prep for the next three years, then I wanna do missionary sex.” “Michelob Ultra!” O’Malley shouts back.

This is the normal part of the video, a spiritual successor to Leonardo DiCaprio dodging obstacles and raising his high score after plunging into a dissociative state in 2000’s The Beach. At around two minutes in, O’Malley is re-rendered as a polygonal video game character who then proceeds to dance and roll around on the floor as if in a trance for the entire duration of Tool’s 2002 single Schism while a fever dream of brand iconography and inspirational quotes unfolds around him.

“No excuses, you must kill if you want to own 15 private jets,” reads one made-up quote attributed to the motivational speaker Jim Rohn. Other fake quotes are attributed to world leaders past and present, like one by Colin Powell that reads, “There are no secrets to success. We got Saddam, we found him in the hole in the ground and we won Iraq.” All of them read like an ebooks twitter bot that was gorged on American Psycho and early aughts Bush administration press briefings.

While the entire parody cleverly lampoons the sociopathic state many blockbuster games require you to enter into in order to complete their objectives, it’s also an effective distillation of the last 20 years of War on Terror hypercapitalism in which America exported both McDonald’s and drone strikes while luxuries like two-day shipping and free Kombucha at your downsizing workplace keep the peace at home. 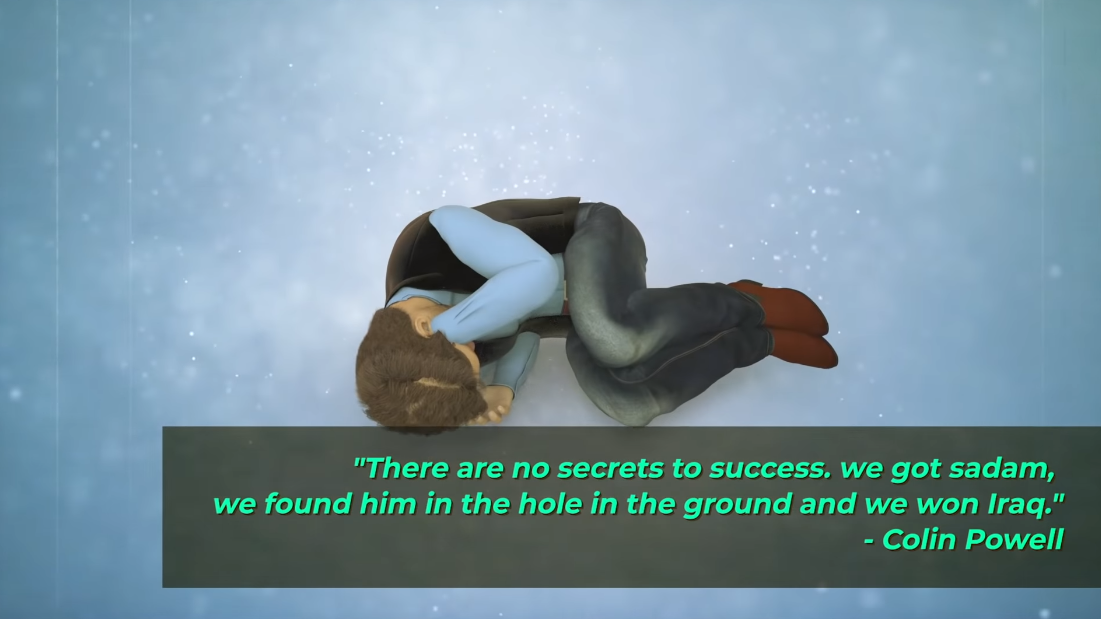 I’ve walked past the Hudson Yards plaza, whose 78-square-metre condos run almost $US2 ($3) million, several times a week for over two years now. During construction it was pure Blade Runner. The parts of it that are now finished are more reminiscent of one of those beautiful shimmering cities in the sky from a JRPG whose secret to flourishing is turning poor people into canned meat.

At its centre is “Vessel,” the walkable public sculpture designed by Thomas Heatherwick which looks like someone literally tore out New York’s beating heart, petrified it, and displayed it as a warning to ward off homeless people. Or at least this is how I feel every time I lock eyes on it while walking to catch the Megabus back to Philly. O’Malley’s video is full of that energy.

Or as one YouTube commenter summarised much more concisely: “This is what OD’ing on capitalism feels like.”