Weathering With You Is A Gorgeous, Earnest Romance That Can’t Quite Escape Your Name’s Shadow

Stop me if you’ve heard this before: A boy yearning for a better life in the big city and a girl discovering magical powers she doesn’t understand are pulled together by fate and fantasy, their shared secret in this magical ability ultimately blossoming into love. That’s the premise of Makoto Shinkai’s latest animated movie, but here’s the problem: It’s also the premise of his last one.

That movie, Your Name, sparked its own zeitgeist in 2016, not just becoming one of the biggest animated films in Japanese box office history, but an international sensation, garnering awards and praise across the world while putting Shinkai on the map as one of the medium’s most notable talents. Weathering With You then, out this month, has a lot to live up to”and while it more than gets by riffing on similar themes to Shinkai’s prior work in its own charming ways, that also means it can never quite live up to the weighty expectations (arguably impossibly weighty) born upon its shoulders. 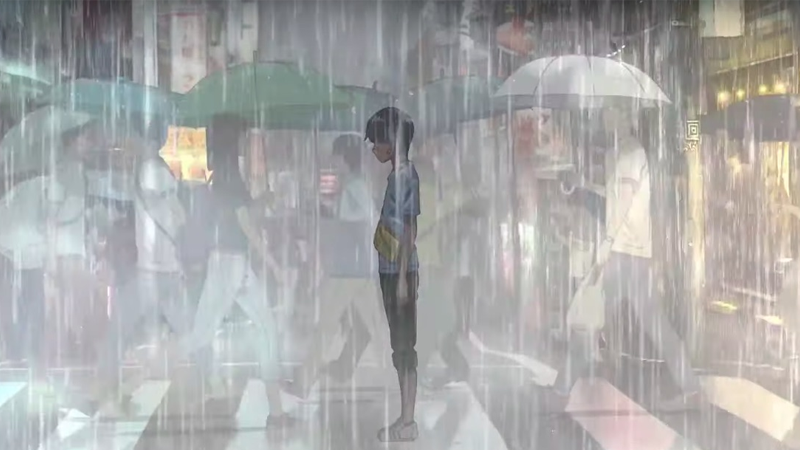 Directed and written by Shinkai, and produced by Genki Kawamura, this film, like Your Name before it, is set in contemporary Japan. After fleeing his secluded island home to start his own life in Tokyo, teenager Hodaka Morishima (Kotaro Daigo) finds his path intertwined with an orphaned young girl named Hina Amano (Nana Mori)”who, after losing her mother, developed the mysterious power to alter the weather and turn cloudy skies into sunny days.

Initially tasked with interviewing Hina for the freelance writer Hodaka’s interning for/living with, the teens turn her magical ability (in a city increasingly beset by severe downpours) into a business”before realising not only are their feelings for each other blossoming, but that Hina’s powers come at a cost.

In comparison to the time-twisting, body-swapping fantastical elements of Your Name, Hina’s weather-manipulation powers in Weathering With You are treated, like so many other elements of the film, with a fairweather simplicity. No one, Hodaka or otherwise, questions or fears Hina’s seemingly magical powers once they are revealed”the citizens of Tokyo just casually accept that the “sunshine girl” of religious folklore is something that actually exists, and little time is dedicated to explaining how or really why Hina’s powers appear in the first place.

This casual acceptance of a divine power does rob the film of a little of its fantastical mystique, but the banality with which the film treats its more esoteric ideas ultimately works in its favour. With little desire to examine the practicality of its premise, Weathering With You instead concerns itself with adopting an intimate, tight focus on Hina and Hodaka as characters, whether as individuals or, eventually, as a romantic pairing. 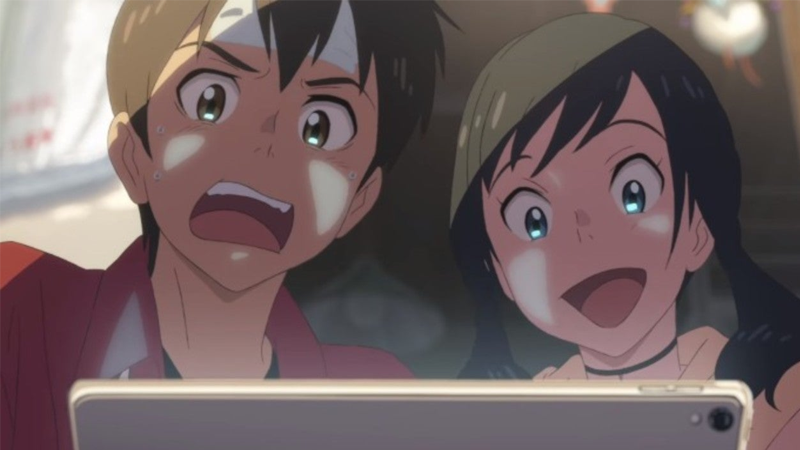 Hodaka and Hina make for a charming duo. (Image: GKids/Toho)

Coming from challenged backgrounds, both Hina and Hodaka are presented simultaneously as wise beyond their years”fending for themselves with infinitely more maturity than any of the adults around them”while also brimming with the earnest romanticism of youth, unburdened by their lots in life. Hodaka’s intense desire to live in a bustling city like Tokyo, no matter the struggles to get there (or the life he willingly leaves behind), is driven by the film’s equally earnest presentation of the city’s urban beauty.

Even in darker moments, when Hodaka brushes up against the seedier underbelly of Tokyo, his surefire optimism that everything will work out because he has made his hopes clear”whether it’s his own independence or his eventual desire to help Hina share her powers with the world”shine through, providing the film with much of its forward momentum. And while Hina herself, as the “prize” of Weathering‘s relatively straightforward romantic arc, is primarily viewed through Hodaka’s lens rather than her own, her similarly driven attitude to use her powers to literally brighten the days of the people around her beyond financially capitalising on them (as initially proposed by Hodaka) makes her a compelling foil to Hodaka, with a charismatic charm that suffuses the film’s core narrative with a breezy levity. 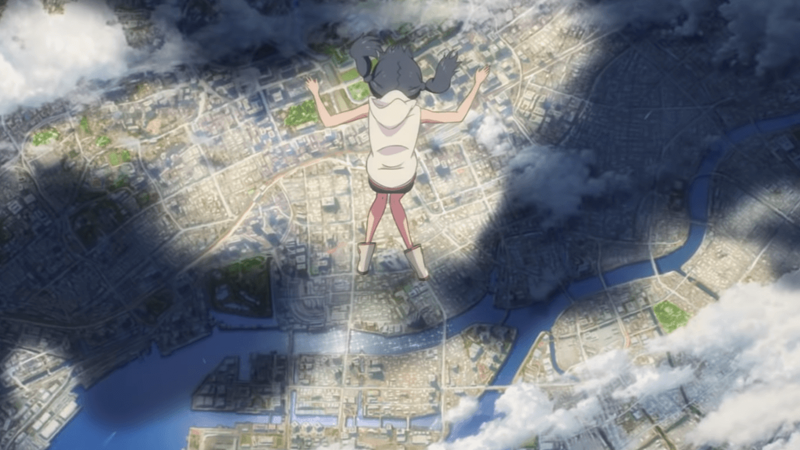 The capital-R romanticised ideals of these characters are likewise reflected in another of Weathering‘s greatest strengths, which is its sumptuous presentation of Tokyo itself. Almost a supporting character in its own right, the film’s urban setting is presented with a beauty that’s as equally breathtaking as the film’s most fantastical moments. Whether it’s in the hazy glow of the city’s bustling central prefectures at night or in the rain-soaked solace of its quieter residential areas, Shinkai’s directorial eye lingers on exquisitely-rendered establishing shots of city streets and high rise buildings, inviting you to consider the idealised beauty of Tokyo in a similar manner as its protagonists.

While the trailers might focus on the jaw-dropping scale of magical sights like Hina tumbling through the clouds above, its real love in practice is for the world below those fantastical vistas.

It is a film that is intensely concerned with the very idea of Romanticism itself, whether it is in the presentation of its setting or in the arc of its two main characters.

But the laser-focused simplicity of Weathering With You throws into stark relief its biggest flaw: that these are all very much themes and ideas Shinkai tackled in Your Name. Although it is perhaps unfair to directly place the filmÂ into the context of being Shinkai’s next project after such a monumental hit, with little itself to add to those past explorations, beyond presenting them through new characters and a different fantastical premise (one that is deliberately less of a focus than it was in Your Name, providing one less distraction), it cannot help but invite audiences aware of the director’s past works to draw comparisons and perhaps find the film a little lacking on its own merits.

If Your Name didn’t exist, Weathering With You would be an overtly simplistic, yet charming fantasy. But unfortunately for Weathering, it does and cannot help feel like, as the film’s protagonists find comfort in the familiarity of the city around them, he is likewise continuing to explore comfortably familiar thematic ground. 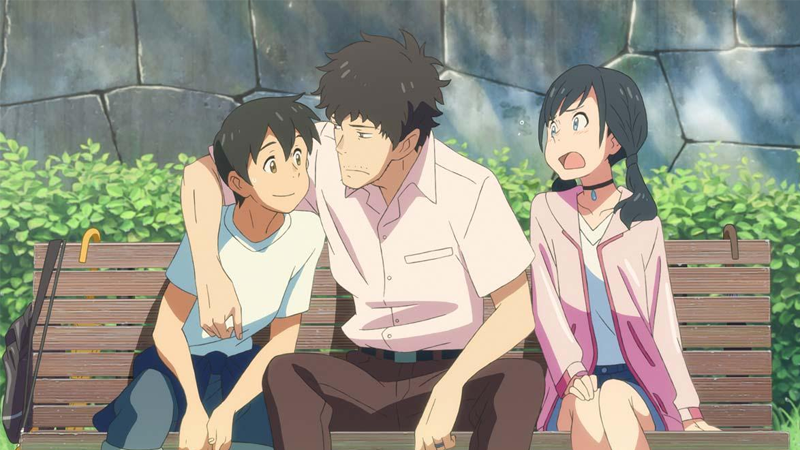 Even without that context, however, the film’s almost ruthless quest for simplicity presents another flaw, in that some of its headier ideas are left unfocused and underexplored to continue to mine Hodaka and Hina’s relationship for all its worth. The characters outside of Hodaka and Hina, like Hina’s younger brother Nagi (Sakura Kiryu), or the writer Hodaka initially moves in with when he comes to Tokyo, Suga (Shun Oguri), are presented with broad strokes, strokes primarily defined less by their own characteristics and more by their immediate relation to Hodaka and Hina’s.

And as the film builds to its climax and the stakes are raised”not just for Hodaka and Hina’s future together, but for Tokyo itself”and headier ideas enter the picture, they are left lacking either the time to be properly dealt with beyond a basic presentation or with any nuance at the expense of driving Hodaka and Hina to the inevitable conclusion of their romantic endgame. It’s unfortunate as, perhaps unsurprisingly for a film built around weather manipulation powers, Weathering begins to introduce timely commentaries on climate change and urbanisation in its later acts that would resonate far more strongly if they were not ultimately left by the wayside to keep its focus tight on its dual protagonists. 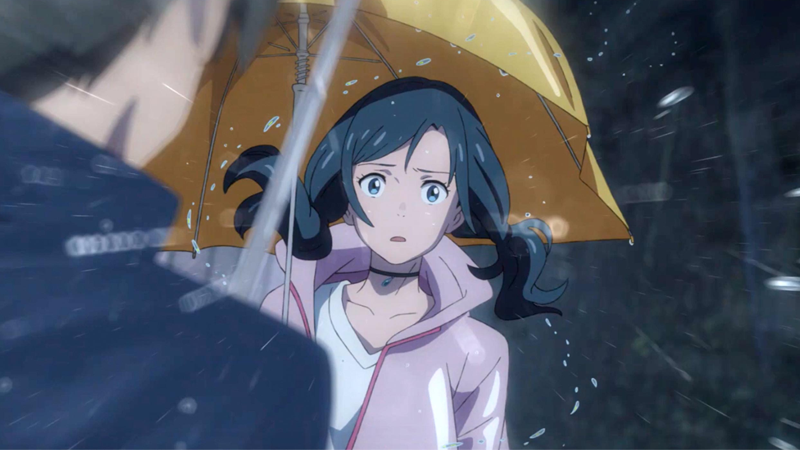 Despite the fact that it struggles to stand on its own two feet at times, there’s a lot to love in Weathering With You. From the earnestly beautiful simplicity of its protagonists’ plight to its tender, touching examination of Tokyo, it is a film that revels in intimacy”whether it’s in the appreciation of a relationship that grounds you in a period of chaos, or just the simple romance of finding a quiet life in a bustling, big city.

It is an intimacy that, for better or worse, also sums up Weathering‘s own relationship with is spiritual direct predecessor and Shinkai’s work even prior to it.

In playing with such familiar themes and scenarios as Your Name, Weathering With You feels impossible to see without the context of its place as the next film in Shinkai’s oeuvre. Its deliberately cosier scale in comparison, while appreciated, amplifies that iterative undercurrent”leaving its emotional highs to never quite manage to hit you with an impact as boldly or as vividly as its predecessor did.