No matter how much our parents might have yelled at us to go outside instead, the things we watched on television as kids can play a big role in our adult lives—as evidenced by the underlying commandments guiding this website and its regular visitors, who saw Fast and Furious as children and pledged their undying allegiance to the Toyota Supra and Honda S2000.

For me, that thing was a show called Yu-Gi-Oh. There weren’t many cars in it, but being a perpetual adolescent mega fan of the show and a car journalist, I figured I would be the best candidate to cast them. Think of this like What Car Should You Buy, but for a bunch of television characters that don’t exist.

Sure, it isn’t Fast and Furious, but we blog about that enough already. At least, that was my thinking when I first thought of writing this up.

I originally tried to pitch this blog, “What The Characters Of Yu-Gi-Oh Would Drive In The Year 2020,” back in October with “2019” in the title. It was a list I made on a particularly inspired day because I’m a perpetual 12-year-old fan of a show that I watched as a child, and I’d kept the list to myself until mentioning it to approximately three (3) of my coworkers, all of whom praised the idea. Thus, I saw its name in lights, but I had to tip toe around the subject—if I didn’t catch my bosses in the right mood, this blog might be lost forever.

I sat on the idea for months, waiting for the perfect moment. On some days, I hesitated for the keyboard to introduce it to Slack, before reeling back, deciding it wasn’t yet time. Perfection takes patience, you know.

Then came the day in mid October, when approximately zero car-related things were happening in the news and your lovely neighbourhood car website, Jalopnik, was in desperate need of some blogs. This was my moment. I brought the raving endorsement from my three (3) colleagues to my editors, knowing this would be the day. I tried to be cool about it. I needed to be cool about it.

Patrick George, who was the boss of this website at the time, took eight minutes to respond. It felt like eight hours.

I lost hope. I went back to my regular car blogging, knowing that you readers all were worse off without this blog in your lives. But that was how the universe played this one out.

But I got a new job last week, and I knew that in my dying breath at Jalopnik, I could convince one of the editors here that I was worthy of having my moment (read: annoy them enough to get them to publish this, so that I would shut up).

I tried again. There was hope in my eyes and fire in my heart. 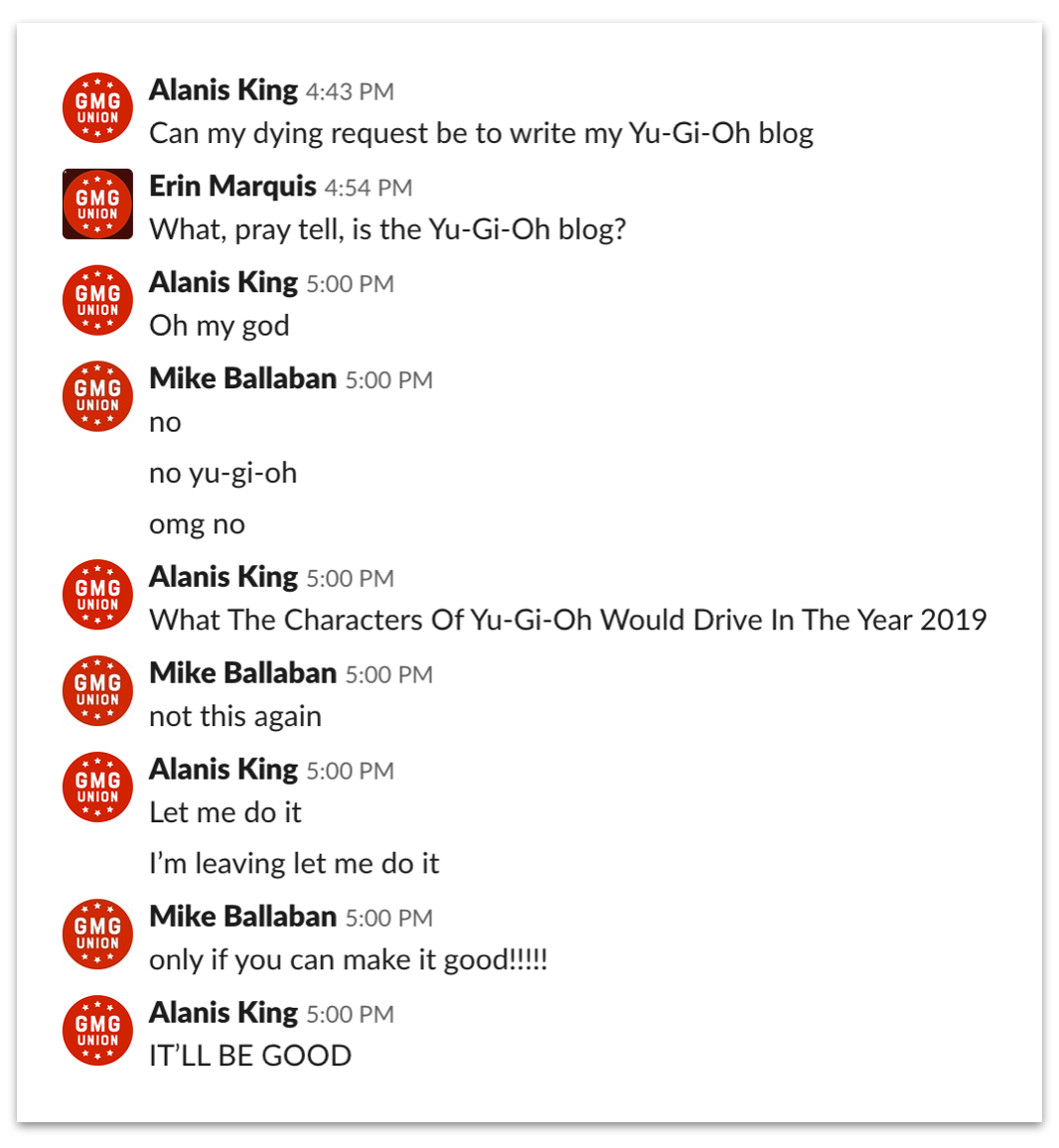 Editor’s Note: Was this blog good? It is hard to say. Mike got too busy to actually edit it, so passed it along to me, Raph, who was entertained by the prospect of The Yu-Gi-Oh Blog being published more than anything else. I edited it and here we are.

So here it is, everyone: the Yu-Gi-Oh blog. If we’re getting into nerdy specifics, we’re only going to talk about the main characters from the original Yu-Gi-Oh, because while I would love to go down a list with all of the series and character arcs, that would earn this blog a one-way trip to the trash bin.

What Is Yu-Gi-Oh, Anyway?

The original Yu-Gi-Oh series, if you didn’t know, is an anime that aired in the early 2000s in the U.S. with an English dub, based on the late-1990s manga by Kazuki Takahashi. It’s about a bunch of teens who play a card game called Duel Monsters to save the world, and was targeted toward children in America. One of the main morals of the show is friendship, and there’s also a place called the Shadow Realm, where your mind can be trapped in torment and isolation for all of eternity while your body stays alive. All of that happens if you happen to lose a card game, because card games are currency here.

It’s all very wholesome, with a healthy amount of “Well, that got dark! Is this really a show they marketed toward kids? Should my kids be watching this?”

You might wonder why a bunch of teens would want to play a card game where the punishment for losing is literal hell, and to that, I say: Great question! They started out by playing the game at school, then some people got kidnapped and their release depended on the card game. One thing led to another, and then the fate of the world was in the balance of the card game, aided by a teen billionaire who allowed the world to continue to be in jeopardy so he could sell technology related to gameplay.

Corporate greed allowing the world to burn all that. Good life lessons here!

In any case, here are the cars the characters would drive in the year 2020, based on their personalities in the English dub of the anime.

Yugi, in reality, would own the cheapest vehicle possible and share it with his grandfather, whom he lives with. But if we’re going on aesthetics here, he’d be in a Honda City.

I mean, look at it. It’s tiny and adorable, just like him.

Image: Yu-Gi-Oh!: The Dark Side of Dimensions, left,Image: Audi, right

The Pharaoh, if he were actually alive in modern times and the world didn’t revolve around card games, would probably be a lawyer or something. He’s confident, stubborn and always wants the villain to realise they’re a villain, so he’d be good at that kind of thing. He’s also always wearing somewhat-dressy shoes and Yugi’s school uniform, which looks kind of like a suit if you squint.

So, yeah, put him in a black Audi RS7. It’s sleek and fit for someone important, but not someone who wants to shout to everyone that they’re important. The Pharaoh has better things to do.

Image: Yu-Gi-Oh!: The Dark Side of Dimensions, left,Image: Ferrari

Seto Kaiba does not have time for car shopping while running a large company and still fitting in time to be properly egotistical, as demonstrated by the fact that he once paid far more than double MSRP for a new Ferrari 360, telling the salesperson to “keep the change” because he was in a hurry.

But if he did have time to shop for cars, he would own a Ferrari FXX-K, because why get a LaFerrari—the street-legal car that the track-only FXX-K is based on—when you can make a bunch of sorry people who have less money than you do work extra hours to make the FXX-K street legal? That’s great for a laugh.

I mean, let’s be real, this dude built an elevator to space rather than just going up there in a rocket from time to time. He’s all about taking unnecessary steps for the fun of it. Plus, his little brother seems to like Ferraris.

If his character arc hadn’t begun as an evil rich person who kidnaps people’s family members using his giant staff that caters to his every need, Maximillion Pegasus is a character you would have described as “fabulous.” Thus, it’s only right to put him in a Rolls-Royce Cullinan—driven by someone else, of course. He’s too good for that kind of chore.

The Cullinan and its Cullinan Diamond namesake are also good symbolism for Pegasus, as he once kept a one-of-a-kind game card deemed too powerful to be put into circulation in the show—basically, the Cullinan Diamond of the Yu-Gi-Oh world—to use for himself, in a tournament.

The only logical vehicle choice for Joey Wheeler is a graphite Honda Civic Type R, because with its angular looks and red badges, it looks like his most prized possession: the Red-Eyes Black Dragon card, which he loves to enthusiastically yell the name of while talking about Duel Monsters.

Driving a car that looks like the dragon thus gives him excuses outside of the card game to enthusiastically yell its name.

It’s hard to pinpoint what exactly makes a blue Subaru WRX STI perfect for Mai Valentine (who drives what looks to be a blue Peugeot 206 CC in the anime), but it just is. Basically, Mai is a badass and she flaunts it, as I would feel about any confident woman driving a WRX STI.

She’d probably remove the STI badges, because they clash with the blue.

Autotrader” loading=”lazy” > Image: Yu-Gi-Oh!: The Dark Side of Dimensions,Image: Autotrader

Téa Gardner is all about cute things, to the point that she uses a Duel Monsters card called “Shining Friendship.” She’s very much the type to twirl her hair and twirl around on her toes, thus the perfect match for her would be one of the cutesiest cars around: the third-generation Mazda Miata.

Tristan Taylor (doesn’t play card games, unless his life suddenly depends on it, but cheers on everyone else) and Marik Ishtar (the vessel for a villain who plays card games) are bike boys, and I will leave it at that.

Bandit King Bakura, an ancient Egyptian thief who becomes a major antagonist, would drive anything with a Hellcat engine, because he’s a thief and people love to steal those things. But, true to how Bakura gets overlooked in the anime, he won’t get his own section.

If this publishes, it’s a real feat. If you made it to the end without having any earthly idea what a “Yu-Gi-Oh” is, that’s also a real feat. After all, it is no Fast and Furious.

Congratulations, to both of us.