This past Monday morning, as I walked out my back door to go to an early dentist appointment, I stepped right over a sleeping raccoon. He woke up and growled, a low rumble like an angry dog’s. I was surprised to see him there, but I shouldn’t have been. After all, the raccoon had been in the same place the previous night. Neither of us knew that we were about to become famous on the internet.

This raccoon and I have a history. In weeks past, I have seen him hanging around, scoping my place out. Over time, he got bolder. When I arrived home this past Sunday night, I saw him huddled in the darkness, up against my back door. I thought he was a stray cat until I got closer. My back porch light detected my movement and flickered on. I froze in shock to see the raccoon, his tail between his legs, his body poised as though he was about to run off. But he didn’t run off. He just sat there. For a moment, we just stared at one another.

Then I did what anyone else would do in the year 2020: I dug out my phone, snapped a photo, and put it on my Instagram stories. I wrote a grumpy caption about how my neighbours never take their trash bags down to the bins in our driveway, which must be what attracted the raccoon. Then I walked around to the front of my building, used the other door into my apartment, and went to bed.

But the raccoon was still there the next day. After a few panicked Google searches, I convinced myself the raccoon was injured or sick, maybe even rabid. According to the internet, loud noises would scare him off. So I opened my back door and beat my hand against the screen, yelling “Hey!”

I yelled “Hey” over 30 times. The raccoon just growled in response. I got out a broom and poked him with it. More growling. I banged on the screen door over and over again. The raccoon did not budge, instead curling his body ever more tightly into a furry ball. He was trying to sleep.

I called my local chapter of Animal Control. A city employee knocked on my door ten minutes later. I told her about the raccoon. She nodded, polite and serene, while also exuding an unspoken aura of “Why on Earth did you call Animal Control over this?” She walked up to my back door and cooed gently at the raccoon, the way you’d talk to a shy child hiding behind a couch. I instantly felt like a complete arsehole. Who the fuck was I, banging on the back door and poking this poor guy with a broom? Apparently I was supposed to just talk to this raccoon like he was a damn person.

From my vantage point in the driveway, I couldn’t see exactly what she was doing, so I have no idea how she worked the following piece of magic: the Animal Control worker coaxed the raccoon into turning over a treasure he’d found. It was a small plastic bag with a single piece of bacon inside of it. I don’t even know where he was hiding this; under his body perhaps? She walked back over to me and held it up with a knowing smile. “This is why he’s here,” she said. I grumbled about how my neighbours never take their trash out.

“He’s not sick,” she went on. “He’s just sleeping. Do you really need to use the back door? Because he seems pretty comfortable.”

This was not what I expected. I thought Animal Control would make the raccoon leave. Maybe put on a pair of oven mitts and carry him into the woods? I shrugged, dumbfounded, stuttering about how I was glad the raccoon wasn’t sick. I felt a wave of shame. Who was I to tell a raccoon where he can and can’t sleep? The Animal Control employee walked back up my driveway, assuring me that the raccoon would probably leave on his own but to call her tomorrow if he didn’t. I went back inside and did the only thing I could think of:

they did tell me to call back if he's still there in 24 hours, but i'm not sure what they do then. they probably need about that much time to get him a lease to sign?

As I write this, the first tweet in that thread has over three thousand favourites. I’ve gone viral before, but usually it happens when I tell a decent joke. It’s never happened just because I described something happening in my life.

Throughout the day, strangers responded to my post with questions about the raccoon, as well as asking me if this was part of an Animal Crossing marketing stunt (as far as I know, it’s not). Every few hours, I poked my head outside to see that the raccoon was still curled up on my stoop, slumbering without a care. Around 5 pm, baffled that the raccoon hadn’t moved an inch, I updated my thread to tell the internet about the piece of bacon he’d found and my neighbours’ propensity towards leaving their garbage bags out. (I also left a note on my neighbours’ door about the situation.)

maybe this is too much detail about the raccoon (i don't care anymore, clearly) but when animal control came, they confiscated a piece of bacon from his human-like paws. all of this seems like a joke that i made up for the internet. which is why i didn't say it earlier.

I hadn’t told the internet about the bacon at first because it seemed almost fake. I mean, come on. Bacon? How internet can you get? The whole story was just the type of viral Twitter thread that would have annoyed the hell out of me if I’d seen it on my timeline. Its cuteness felt too perfect, almost manufactured.

The next day, I woke up to find the raccoon had left. But the raccoon saga has not ended for me. The day after that, my sister texted me a link to a local news story about a raccoon on someone’s back porch. At first I just assumed some reporter had seen my tweets and aggregated the story without contacting me. I felt disappointed; my email’s in my Twitter bio, after all. But that wasn’t what had happened.

Apparently, the Animal Control employee thought the whole situation was just as funny as I did, so, just like me, she took it straight to social media. She posted her own pictures of the raccoon and his hard-won bacon on Waltham Animal Control’s official Facebook page, leading a local news reporter to aggregate her post (not mine). Not long after, the reporter found my tweets and emailed me for comment. 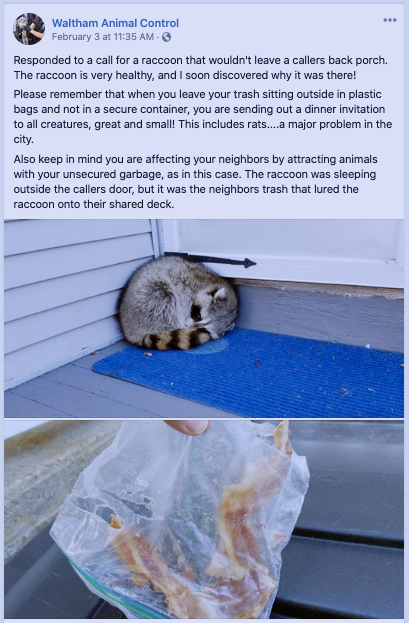 Facebook)” loading=”lazy” > At least one of us got a photo of the bacon. (Screenshot: Waltham Animal Control, Facebook)

Every time I walk out my back door, I think about the raccoon. It was a too-cute experience that seemed custom-made for social media, sure. But it was also a strange meeting that forced me to question the boundary between the wilderness and the all-too-human “safety” of my apartment. It reminded me of the many times I’ve run into deer or rabbits while out on neighbourhood walks, or the time when a coyote killed an outdoor cat at a house down the street from my childhood home. Above all, it reminded me of Untitled Goose Game, and specifically this essay on the blog Grace In The Machine called “Untitled Goose Game and the Inconvenient Natural World.”

“I take bugs outside of the house,” Grace wrote. “I don’t know where my food comes from. I have no garden, and my partner takes care of the few potted plants around our apartment. Most of my interactions with the immediate natural world are driven from a need for control and fear at the loss of that control.”

Untitled Goose Game plays on the tension and discomfort humans tend to experience at the loss of control—the reminder that we are the ones encroaching, not the animals around us. In Grace’s words:

A goose does not operate by humanity’s moral codes. The kind of harm it causes is the kind of harm that we will face by being in nature, albeit a minor form of it. Nature’s ‘harmony’ is fraught with friction. Animals both compete and co-exist, annoy and benefit. To exist with other beings is to accept this contradiction. It is moving that despite all the inconvenience and harm the goose causes, the villagers do not attack it. They take that harm as the cost of living close to the natural world. They attempt to mitigate it, to prevent the goose from entering in. But their attempts are futile, and they cannot bring themselves to end its menace. To end its life would be truly cruel.

Today, it’s snowing. My back door doesn’t look nearly as hospitable as it did earlier this week. I hope my neighbours start taking their garbage down to the bins. But I also hope that the raccoon has found a warm, safe place to sleep.