After Empire Strikes Back, Darth Vader Is Working Through The Ashes Of The Star Wars Prequels

The Star Wars comics’ relaunch this year has pulled the timeline of Marvel’s lens in the galaxy far, far away into the immediate aftermath of Empire Strikes Back. While the main Star Wars book has begun to dive into where our Rebel heroes go next in the wake of losing one of their own, Darth Vader’s relaunched series is taking the Dark Lord on a trip down memory lane.

Opening as the relaunched Star Wars series did last month in the immediate moments after his duel with Luke on Bespin, Darth Vader #1″written by Greg Pak, featuring art from Raffaele Ienco and Neeraj Menon, and lettering by Joe Caramagna”is much less interested in the specific details of what Vader does next than it is with the why. That’s mainly because the what he does next is pretty simple. Taken aback by Luke’s total rejection of taking his place at his father’s side to rule the galaxy, Vader proceeds to stalk a brooding path across the stars to find answers as to just who hid his son from him for decades.

The why of it all? Because deep down, beneath the machinery, beneath the charred flesh and damaged body, Darth Vader is Anakin Skywalker. And he’s angry, isolated, and just wants to lash out at a galaxy of perceived injustices that have followed him for all his life.

This is a conflict that begins in Darth Vader #1 internally”as, watching his son fall into the depths of Cloud City, Vader cannot help but feel the impact of all those he’s loved slip beyond his reach, out of his sense of control. In one of the issue’s starkest pages, Luke’s plummeting figure, tinged red by the cybernetics of Vader’s mask, blurs from the young, disarmed man to Shmi Skywalker, and then blurs once more to a pregnant Padmé Amidala, as Vader glares in silence, his vision becoming so clouded with anger and despair that it becomes pure, red hot rage. The failures of a father, a son, and a husband. (Image: Raffaele Ienco and Neeraj Menon, Marvel Comics)

There is already an inherent tragedy in Vader’s attempts to reach out to his son, and being so absolutely rejected that Luke seemingly falls to his own potential death rather than consider standing with his father. But inviting us to consider that he sees it as a loss akin to losing his mother and Padmé, rather than the villain of the piece attempting to corrupt his son as was initial context of Empire‘s “I am your Father” moment, amplifies that tragedy in a way that adding the context of the Star Wars prequels only really can.

It’s something Vader #1 continues to ponder, as the Dark Lord’s internal conflict becomes imminently external. Simmering with rage that the Falcon, and a very much still-alive Luke, slips out of his reach as it escapes Bespin, Vader promptly goes rogue and ditches the Executor, taking off on a quest to find the people who hid Luke away from him”the people that, in his eyes, poisoned his son’s mind so that he would willingly choose oblivion over his own father, those who made his child weak. He doesn’t really want answers though. He wants to do what Anakin always does, what the man that became Darth Vader has always been good at: lash out and destroy. Vader’s quest for catharsis immediately brings him to Tatooine and the burned-out homestead of Cliegg Lars. Amid the literal ashes of the Skywalker family’s past, Vader (accompanied by an archivist droid, Z67, clinically recalling the lives and legacies of Cliegg, Shmi, Owen, Beru, and ultimately Luke) quietly stalks what remains of the homestead, flashing back to his rage as a younger man over his failure to save his mother from Tusken Raiders. Angry then, as he is now”the memories tinted red here, once again”incapable of holding in his anguish and lashing it out at something, anything.

There’s a problem this time, as Z67 notes, blissfully unaware that the Dark Lord is Anakin Skywalker, one and the same. Back then, Anakin found someone to punish for his failure, for his anger: the Tuskens, the men, the women and children too. Right now, all that’s left is a burned-out home and some ghosts, intangible enough that not even a Sith Lord can strike at them. 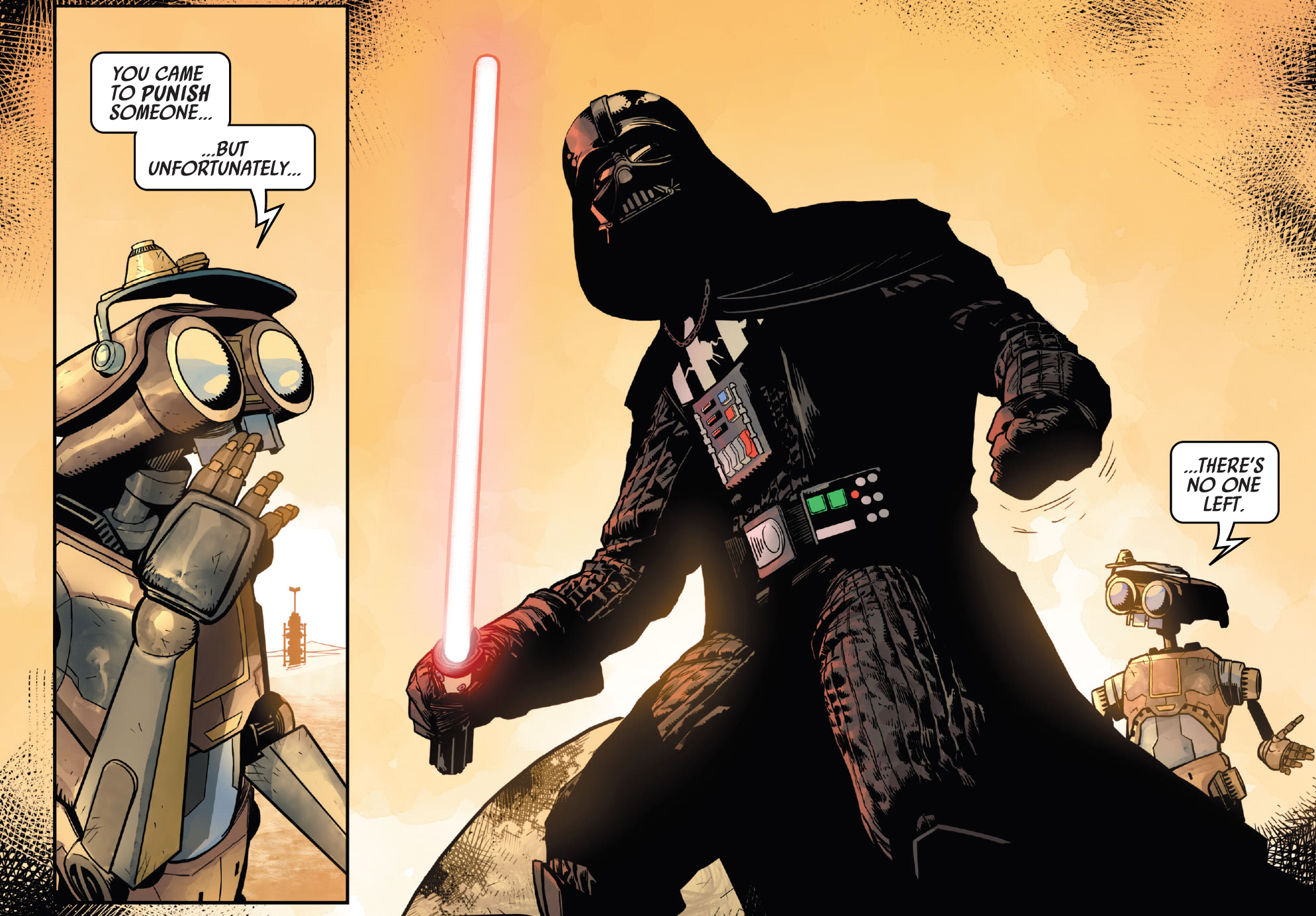 Vader ultimately gets some release”some foolish pirates, thinking they’re tracking a lone shuttle, rudely discover that its occupant has no time to even relish in the stark brutality with which he cuts them down. It’s brief, the actual moment of conflict lasting barely half a page before it’s over. It is, clearly, not enough to satiate the anger still burning deep inside Vader’s core.

His quest for answers, and a way to wrestle with a fury that has torn away at him for decades at this point, is far from over. But it’s a quest that, it seems, will strive to deeply remind us of the man behind Vader’s black mask at every turn it can. Because to remember that simple fact is vital. While he is more machine than man now, the man that Anakin Skywalker was”that Anakin Skywalker is“is still there, with years of hate and fear and baggage that that legacy brings. 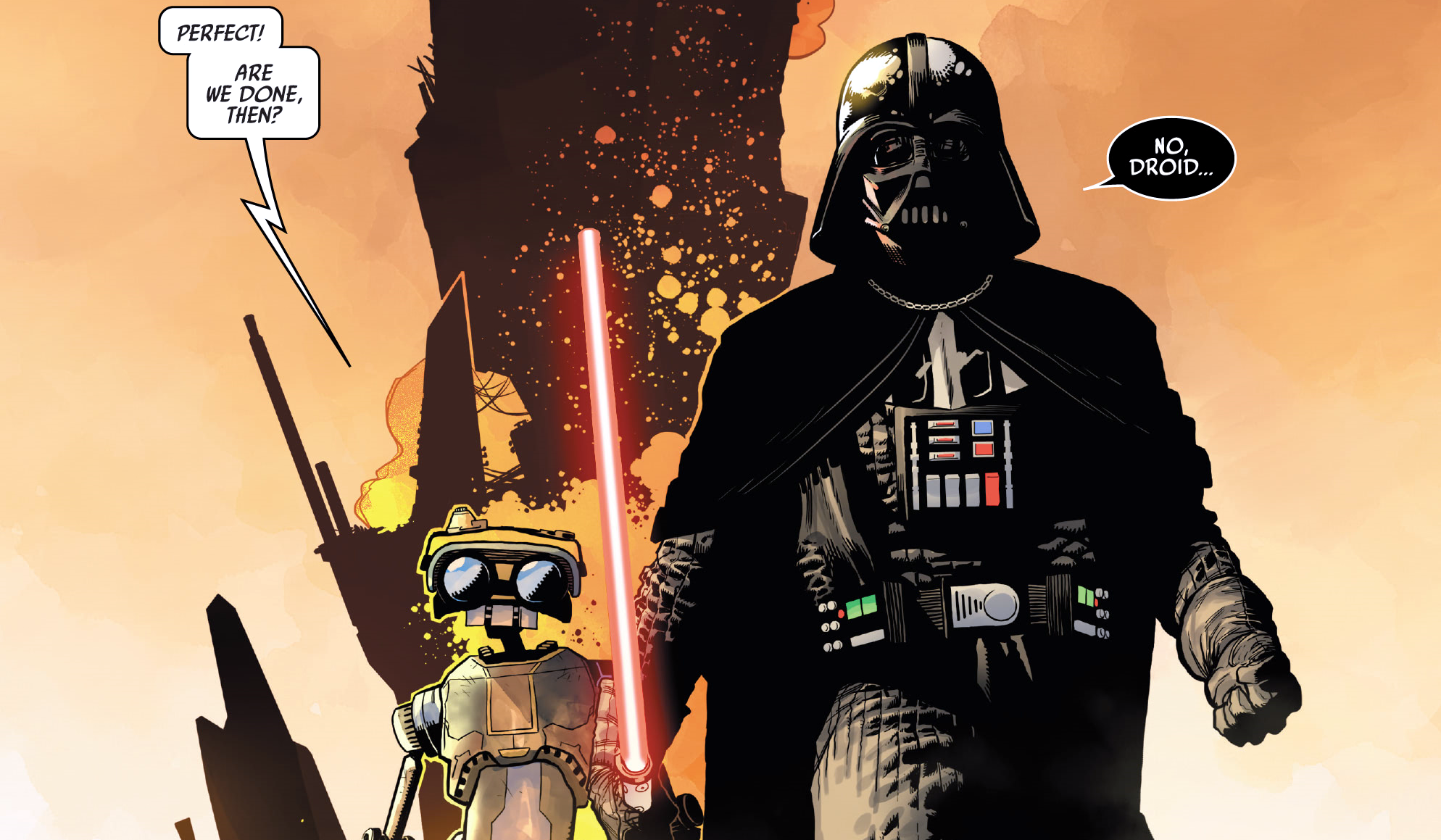 Can a man as angry as Darth Vader ever be truly done? (Image: Raffaele Ienco, Neeraj Menon, and Joe Caramagna, Marvel Comics)

Marvel’s era of Star Wars comics has been able to more deeply enmeshÂ the story of the Star Wars prequels and the original trilogy in ways that the movies simply never could, thanks to the benefit of hindsight granted by their decades apart in creation. Vader himself has proven to be a sense of pathos that the films themselves could never quite truly capture.