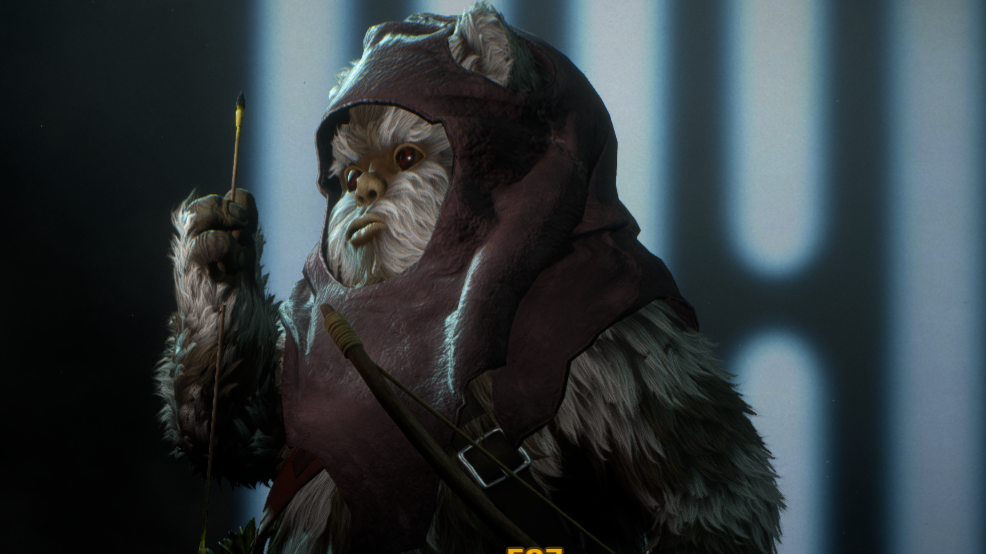 Screenshot: Kotaku
To sign up for our daily newsletter covering the latest news, features and reviews, head HERE. For a running feed of all our stories, follow us on Twitter HERE. Or you can bookmark the Kotaku Australia homepage to visit whenever you need a news fix.

Star Wars Battlefront II was limited at launch in 2017 but has expanded since to add battles from the Clone Wars and odd new hero characters. The latest update brings two new specialised units: the cunning Imperial Security Bureau agent and a small Ewok scout. Both are deadly, but the Ewok is a special kind of terrifying: small, fluffy, and a crack shot with a bow. If you’ve ever asked, “How could Stormtroopers lose to teddy bears?” this is your answer.

Battlefront II spices up combat with a variety of characters and upgraded soldiers that you can purchase with enough “battle points” during matches. Capturing an objective or taking out enemy troops earns points that grant access to everything from bombers to Darth Vader himself. While updates added missing heroes like Obi-Wan Kenobi, smaller patches and events slipped in everything from Clone Commandos to chain-gun-toting aliens from The Rise of Skywalker. Where Battlefront II initially felt stale—especially in the early days where players had to unlock these characters with currency before playing them—the game is now teeming with exciting options for different playstyles. This time around, the focus is on scouts and infiltrators. That means living out your fantasies of stabbing Imperials in the knees as a tiny Ewok Hunter.

You’d think a minuscule furball would be a fragile, risky character, but it turns out that the Ewok Hunter is damn good at taking out enemies. They sowed terror in the Ewok Hunt mode, but I never expected them to become a permanent part of the battlefield. Part of what makes them effective is how their bow and arrow works. While it’s possible to enable manual aiming to fish for headshots, the Ewok is also a badass marksman with auto-aim. You’ll miss out on hitting vital weak points while this is enabled, but it also means that players rushing around as Ewoks can strafe about and fire arrows that usually hit their target. It’s both hilarious and frankly scary if you’re on the receiving end. You’ll start out hiding in a bush or behind a barrel only to pop out and chase a group of enemies like a deadeye assassin. If they turn around, you can just blow your nifty Valiant Horn, which reduces incoming damage and buffs attack. Sure, you show up on the enemies’ radar, but let’s be honest: You’re not trapped behind enemy lines—they’re trapped there with you.

Ewoks have what I like to call the “Oddjob Advantage.” Just like how the infamously short, hat-wearing villain’s appearance in Golden Eye 007 made him hard to hit, the Ewoks’ stubby bodies and devious tactics make it possible for them to stand toe to toe with other characters. It’s the sort of thing that makes Battlefront II quirky. You can play as a rocket trooper and blow up enemy walkers, but you can also play as an Ewok or rolly-pal BB8 and cause just as much terror and trouble.

The Empire’s not completely screwed. Instead of Ewoks, the Imperial rosters expanded to include an Imperial Security Bureau agent. Ignoring the fact that their helmet looks pretty dopey, they’re a stylish and fun class. They have a scanning ability that can locate up to four enemies close by, and they can activate a skill to run around at faster speeds. It’s not quite as sneaky as playing hit and run as the Ewok Hunter, but it’s still fun. One of the coolest damn things is their alternate fire ability. Instead of blasting John Woo-style with their pistols, the ISB agent charges up a powerful blast. I shot one of these off as a last-ditch effort to destroy a Rebel scout walker and blew the thing up with an incredibly lucky shot. It was one of the coolest things I’ve done in Battlefront II. Too bad about their fashion sense, though.

When I wrote about the Rise of Skywalker update, I said that it made Battlefront II feel complete. Adding more maps from the Sequel Trilogy placed a cap on a game that didn’t really represent the entire Star Wars saga on release. After that, the last thing I expected was overpowered Ewoks and Imperial badasses. I don’t know if Battlefront II will ever feel entirely like the dream game that fans wanted, but each update brings the Star Wars charm that it sorely needed. Yub nub, commander.