Twitch’s policies around content it deems “sexual” are inconsistently applied, but body painting—creating art using one’s face and torso as the canvas—doesn’t run afoul of them. Body painting even has its own official tag on the streaming platform. That, however, has not stopped Twitch from indefinitely suspending a streamer who says she was doing everything in her power to paint within its lines.

Forkgirl, a body painter and cosplayer, lost her channel on February 13. In a Twitter DM, she told Kotaku that she was notified via an email from Twitch that told her that her channel was indefinitely suspended due to “Creating or sharing content featuring nudity,” which is against Twitch’s terms of service. Forkgirl has been publicly petitioning Twitch to reinstate her account because, as far as she can tell, she didn’t do anything wrong. On Twitter, she posted a picture of what she looked like when she received the suspension: 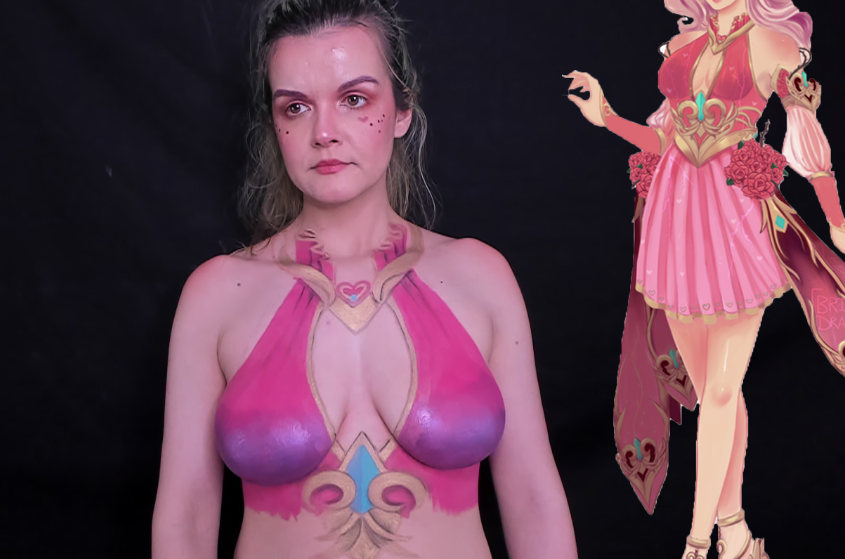 Forkgirl was painted to look like a fan-made skin of Persephone from Smite, a look similar to body paintings she’d done in the past without ending up in the confusing confines of Twitch jail. She did not have a top on, but nothing immediately rule-breaking was visible: Twitch’s terms of service explicitly allow body painting but prohibit anything the company deems to be overtly sexual, as well as exposing “male or female genitals, buttocks, or nipples.” Like other body painting streamers, Forkgirl takes extra precautions to ensure she’s not in violation of Twitch’s rules.

“I wear pasties and paint many layers of liquid latex over my chest to hide the pasties,” she told Kotaku via DM. “I also start with my camera on my face and neck only, until my chest has been painted. This fits within Twitch’s terms of service and community guidelines and is the standard for most body painters on Twitch. As an extra precaution I stream with my heater on at around 80 degrees F, to prevent my body from reacting to the cold.”

In addition, she said that she and her moderation team go out of their way to keep the stream PG-rated, forbidding mention of her body or any specific body parts. “Only compliments focusing on the art are permitted,” she said.

“The only out of the ordinary thing I can think of is that the viewership numbers were unusually high [that day], with many trolls coming in, claiming they were reporting me.”

She suspects that foul play might have led to her sudden suspension. “The only out of the ordinary thing I can think of is that the viewership numbers were unusually high [that day], with many trolls coming in, claiming they were reporting me,” she said. “I assume the suspension was caused by trolls targeting the body paint community and mass reporting my channel, which might have resulted in an automatic ban.”

Kotaku reached out to Twitch for more information about Forkgirl’s suspension, but did not receive a response as of this publishing.

While Forkgirl doesn’t know for sure that trolls got her channel suspected, it wouldn’t be the first time such a thing happened. Groups of Twitch users have decided it’s their duty to inform women—especially those who don’t play games 100 per cent of the time—that they don’t belong on the platform, despite the fact that Twitch has not been a gaming-only platform since 2016, and women’s bodies have existed since forever. Body painting, which is one of the first instances in which Twitch allowed a degree of nudity from users who were often women, has been a consistent target for these users. While complex body paintings can take tens of hours of gruelling, nonstop work, popular body painters like Sophia “Djarii” White have, in the past, been forced to contend with 50-strong swarms of irate users accusing them of breaking the rules, claiming body painting functions as a Trojan horse for low-effort sexual content, and making coordinated reports of their Twitch channels. Even though Twitch claims that human beings review reported content to determine context, mass reporting for sexual content seems to reliably lead to suspensions.

Left: a body paint piece that didn’t get Forkgirl in trouble, Right: the one that did (Image: Forkgirl)

“Twitch claims a person reviews content before a suspension is issued, and I (and many others) are very sceptical,” said Forkgirl. “The suspensions are inconsistent, mostly targeting smaller, non-partnered streamers. Twitch claims they look at context and intent when reviewing a suspension, and anyone who has ever set foot in my stream can vouch that there is nothing sexual about my channel.”

This echoes a handful of recent situations involving body painting streamers. Early last year, Twitch gave the boot to a streamer named AriaNina, who started her stream with her chest largely exposed but painted. In October of last year, the platform dropped the banhammer on a body painter who goes by the handle Intraventus, seemingly for no reason beyond the fact that she was body painting. In response, Intraventus released a tearful video expressing shock and confusion over the potential loss of her career, causing Twitch to respond to her appeal, reinstate her account, and tell her in an email that it’d made a mistake. Now Intraventus has taken up Forkgirl’s cause for fear that Twitch might have dropped the paint bucket and made a great big mess again.

“My body is not inherently sexual. I and other body painters on the platform should have the freedom to express and share artistic paintings with our communities without fearing for our accounts.”

“I do think they made the same mistake, unfortunately,” Intraventus told Kotaku in a Twitter DM. “Forkgirl is going through literally the same thing I did back in October. I was hoping that Twitch reinstating my account and apologizing for their mistake was a big win for the body painting community. It absolutely breaks my heart to see it happening again to someone else on the platform for following the same [terms of service] we all uphold.”

Forkgirl’s current suspension is indefinite because she’s been suspended twice before, albeit only for 24 hours in both cases, which were also related to body painting practices that are standard in the community. She previously tried to appeal those suspensions on the grounds that she didn’t believe they were justified, but she never heard back from Twitch. “I went through Twitch’s appeal process, but still have not received a response from my first appeal on July 17, 2019,” she said. “In my appeal, I asked for the suspensions [to] be permanently removed from my record, and for clarification on anything I could do to prevent a repeat happening.”

Twitch has not replied to her inquiries about the latest suspension, either. It’s a running theme with Twitch: The company is rarely forthcoming when suspensions are concerned, especially when smaller streamers are involved. In an attempt to try to get Twitch’s attention, Forkgirl has used her art to express her grievances with the company’s communication style by painting a now-infamous 2018 tweet in which Twitch asked users to “please watch us closely and hold us accountable” on her body. As of now, Forkgirl’s tweet of her painting has over 1,000 retweets and nearly 7,000 likes. It’s been picked up by fans, as well as pillars of the body painting community like Djarii.

Twitch, we are holding you accountable.

The Twitch body-paint community deserves the clear guidelines and communication that were promised to us. My channel has been wrongfully taken from me and I'm asking you to make this right. pic.twitter.com/4gr2eV9ayc

At this point, Forkgirl, like many other streamers, just wants more transparency from Twitch, especially after the company said during last year’s TwitchCon that it plans to begin more precisely informing streamers why they’ve been suspended. Months later, the company doesn’t seem to have followed through. Intraventus said she hasn’t observed any notable changes in what continues to feel like an automated system, even after all of Twitch’s talk at TwitchCon. “If you get enough people/trolls reporting you, their system removes you first and asks questions later,” she said, noting that abuse, harassment, and even death threats are regular problems during her streams. “My body is not inherently sexual. I and other body painters on the platform should have the freedom to express and share artistic paintings with our communities without fearing for our accounts. Every time I go live I fear that Twitch is going to wrongfully ban my account, leaving my community and myself in the dark once again.”

That’s now where Forkgirl finds herself. According to the rules, body painting is allowed, but at this point, she doesn’t think the rules are clear enough.

“The rules are very vague and leave judgement open to interpretation, which is inconsistent and unfair,” said Forkgirl. “Body paint artists on Twitch are not looking to toe any lines. We just want to be free to create our art on our platform that claims to allow and support it.”