Dragon Ball Xenoverse Gave Us The Fan-Fiction We Always Wanted

Dragon Ball Xenoverse released in North America five years ago yesterday. It’s far from the best Dragon Ball fighting game, but it had a secret weapon: the ability to create original characters. This one key feature gave fans something they’d been craving since the early days of forum art and fan-fiction, and it resulted in one of the most memorable Dragon Ball games of all time.

When it comes to 3D Dragon Ball games, the Tenkaichi Budokai series is the cream of the crop. Epitomized in 2007’s Dragon Ball Z: Budokai Tenkaichi 3, these games had intense battles where players could select nearly any character from the franchise. As the Dragon Ball series moved into the 2010s, things started to stagnate. It wasn’t enough to relive the same fights again and again. Xenoverse, which released 2015, had a solution to this problem: offer in-depth character creation and a story where players rub shoulders with their favourite heroes and villains. The plot was silly. Evil time-travellers were tampering with key moments in the Dragon Ball timeline, and the player is summoned to hop from era to era and prevent catastrophe.

Xenoverse mixed the Tenkaichi series’ fighting with additional RPG elements like levelling up skills and buying stat-altering outfits. There was a main story mode but also online competitive matches. Between fights, players could wander around a shared hub world to chat and dance and see each other’s original characters. It felt like a giant costume party for fans who had yearned for the chance to live inside their favourite anime.

Dragon Ball’s appeal is broad because the core of the story—battling against strange new foes, grasping at greater and greater degrees of power—easily functions as allegory for anyone’s personal struggles. The underlying message of Dragon Ball is that even when pushed to the brink time and time again, the good guys win. Goku’s power is augmented and elevated by his emotions. Dragon Ball media, particularly Dragon Ball Z, stresses that our emotions give us strength and that our feelings are valid enough to move mountains, whether we’re the prince of a fallen alien race or a nerdy home-schooled kid. The formula has been revised over time throughout shonen manga and anime: One Piece, My Hero Academia. Anyone can save the world. That notion is reaffirming, like if the Ugly Duckling could also fly around firing fire laser beams

Writing about Xenoverse in 2015, I outlined how the character creation allowed me to express a truth that I was grappling with as a semi-closested trans person. I felt awkward and ugly. Those feelings helped me design my character, a small pink Majin. Majin are essentially demons in the Dragon Ball universe. I felt—in no part thanks to strange glances and rude comments from strangers—a little bit like a monster in real life. It wasn’t intentional, but I used Xenoverse to reclaim that otherness for my own. Fuck yeah, I was a little monster and I was gonna save the universe. Next to any of Dragon Ball’s main characters, my character looks out of place. A little too tiny, not particularly powerful or intimidating. Xenoverse makes it possible for even a clumsy little pink blob to be as heroic as Goku.

What people get from Dragon Ball is often dependent on what they bring and their own personal life experiences. Former Kotaku writer and all-around fabulous person Gita Jackson took a closer look at this in 2018. Many fans explained that Dragon Ball provided an outlet where they learned to navigate forms of emotional intimacy. There was more to Dragon Ball than big battles. In Goku, there was a story of reconnecting with a distant heritage—one of Dragon Ball Z’s earlier revelations is that he is in fact an alien—and finding your place in the world.

Xenoverse was only the third game in the franchises’ history to have character creation. The first was Dragon Ball Online, an MMORPG that was released only in Japan, South Korea, and China. The other was Dragon Ball Z: Ultimate Tenkaichi, which had a “Hero Mode” where players could make their own avatars. It was extremely limited. Xenoverse had it all. You could be Namekian, you could be the same species as the villainous Freiza. You could also wear more outfits and play as a woman. Xenoverse allowed players to express themselves in a way that hadn’t really been done before. No game in the franchise’s history has captured the wild, freewheeling spirit of fanfiction quite like Xenoverse. Xenoverse featured a large cast of playable characters, though not quite as much as the Budokai series in its prime. Looking on YouTube reveals entire playlists where players manufactured their own “what if” scenarios. What if Goku and Vegeta fused to battle the god of destruction Beerus? What if this original character gained immense power? It doesn’t take long to find fan-made battles and self-built mythologies.

It’s fine to identify with Goku or to find inspiration watching Videl or Android 18 fight in tournaments. But the fandom dream isn’t just to project yourself onto these characters; it’s to be a part of their world. Character creation is only one part of that fantasy—the other is to actually change the world they inhabit. Xenoverse allows this through a variety of special battle conditions that can trigger alternate outcomes to iconic series moments. What if there were a version of the story where Freiza is defeated but Vegeta turns Super Saiyan? Complete some obscure side-actions, and you could find out. What’s it like to train under Piccolo? Go ask him and see for yourself. 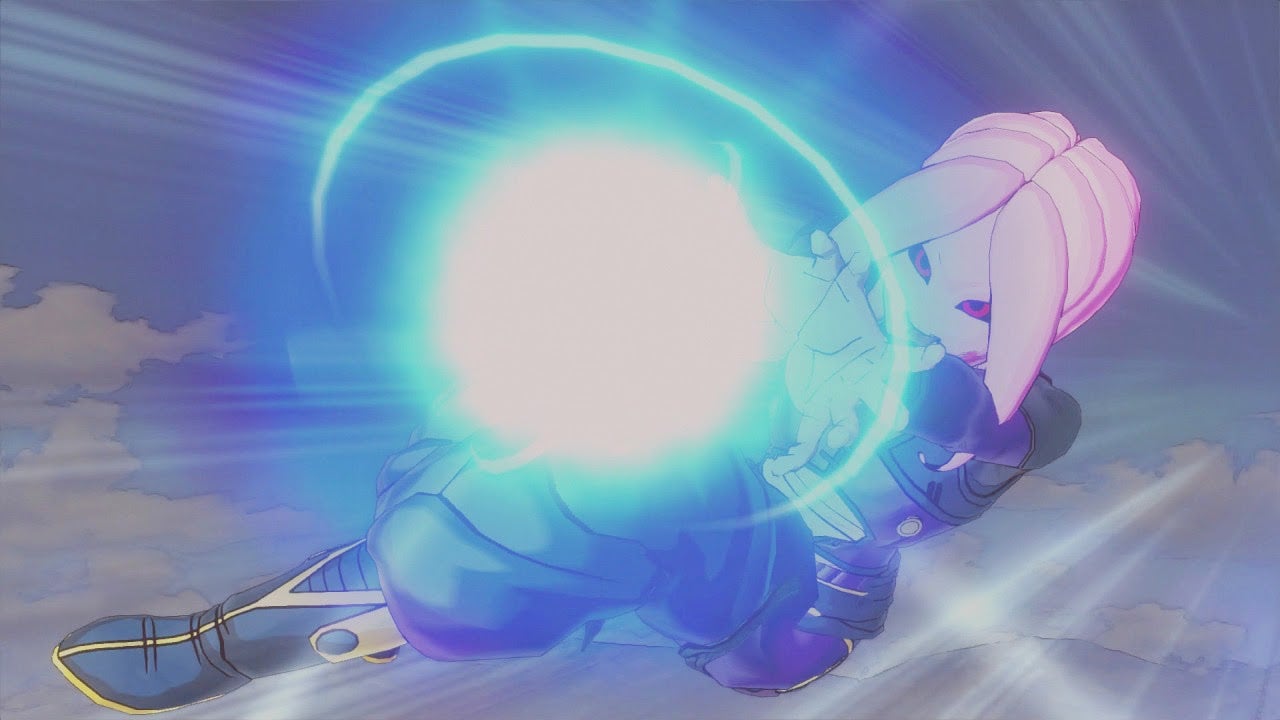 That is Xenoverse’s ultimate strength. Dragon Ball FighterZ looks more impressive and better captures the feel of the anime. The Budokai series doesn’t bog itself down with as many RPG elements. But Xenoverse, despite its grindy, frustrating systems and unstable online play, was wish fulfillment on a disc. These issues were addressed in Xenoverse 2 but that game fizzled out quickly as well, in spite of a re-release on the Nintendo Switch. Xenoverse feels quixotic in retrospect. It gave players the ability to live out their wildest dreams. It punched above its weight, but for a short time, there was a beautiful online universe full of colourful weirdos and hardcore original heroes.