Fortnite Players Divided Over Whether Streamer Cheated In Charity Tournament 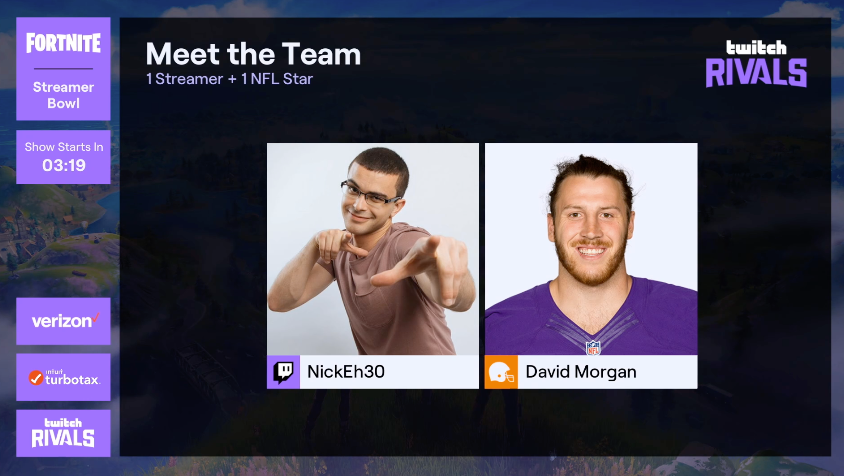 Streamer Nicholas “NickEh30” Amyoony has been accused of cheating during a Fortnite game in last week’s charity Twitch Rivals Streamer Bowl. In a clip circulating online, Nick and his duos partner, NFL player David Morgan, can be heard discussing what sounds like a plan to land in an off-limits part of the map. While some Fortnite fans see the team’s actions as outright cheating, others see it as cleverly bending the rules.

Last Thursday’s Streamer Bowl was a 15-team tournament pairing Fortnite streamers with NFL players, with players raising money for their charities of choice. Each of the tournament’s four games had rules specifying where on Fortnite’s map players could land. Players landing outside the allowed zone would get a warning for their first infraction; repeated infractions would cost players points and eventually get them removed from the tournament.

In game 3 of the tournament, players were confined to landing in four grid squares surrounding Fortnite’s Dirty Docks location. In a clip circulating on the LivestreamFails reddit, NickEh30 and Morgan, a tight end for the Minnesota Vikings, discuss where to land. It appeared they were considering landing outside the designated zone for the match, since NickEh30 said, “They’re gonna be keeping an eye out for Retail Row, but what if we stretch out a little more,” referencing a point of interest near to but outside the zone. 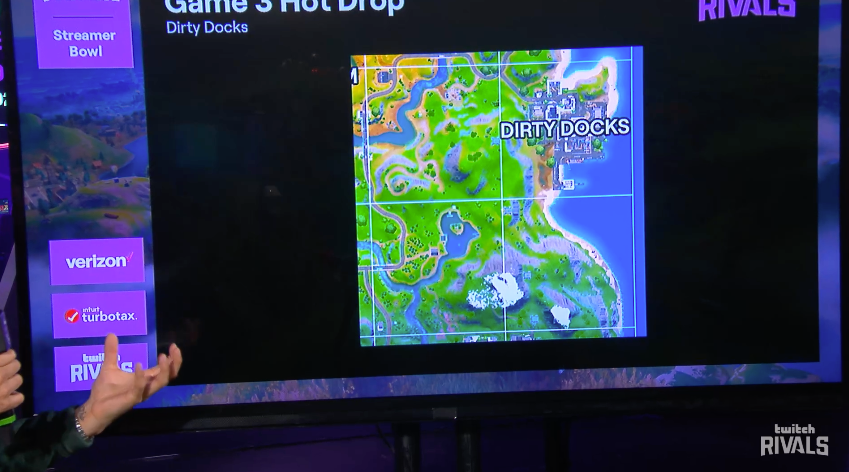 It’s difficult to hear Morgan’s voice on the stream, but NickEh30 responded to something the NFL player said with: “Cuz remember, we get a warning… It’s not a bad thing at this point.” Morgan says something else, at which point NickEh30 laughed and said “It can’t be that obvious, dude.”

In a subscriber-only video on NickEh30’s Twitch channel, Morgan is seen placing a marker at the edge of the designated zone, near the point of interest known as Frenzy Farm. NickEh30 placed his own marker right outside of the zone, saying “Right there.”

“Try not to show too much of Frenzy,” NickEh30 warned Morgan. The pair ultimately landed outside the allowed zone. After they were eliminated from the match, a tournament official spoke to them. The referee cannot be heard clearly in the video, but they appear to be discussing drops, with NickEh30 asking if they’re allowed to practice their drops for the next match, and later saying “dang.” It’s unclear whether this conversation included a warning for landing out of bounds, as specified in the rules. (Neither NickEh30 nor Twitch responded in time for publication.) 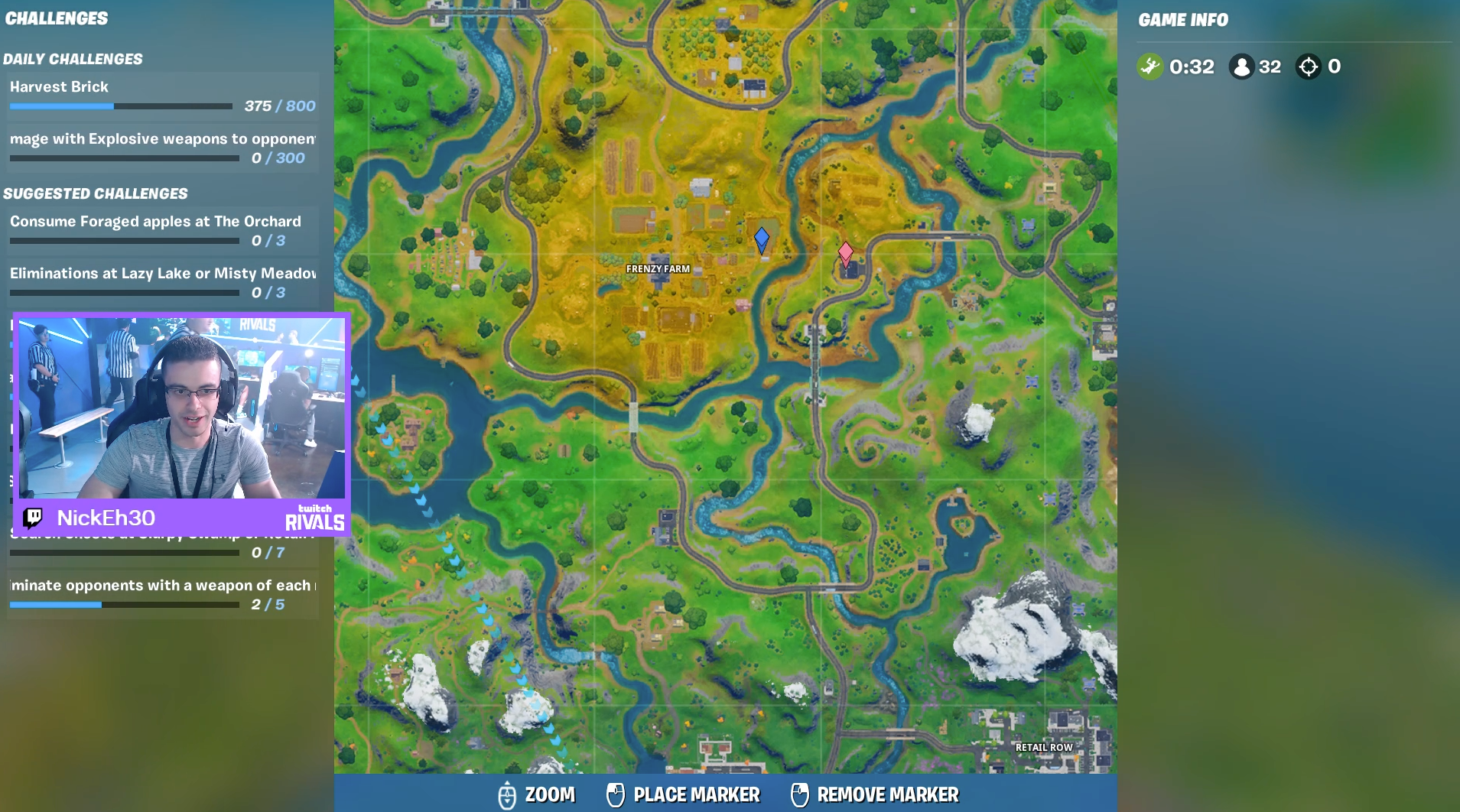 Fans of Fortnite are divided on the team’s actions. Many see it as cheating, or at least purposefully breaking the rules during a charity tournament. To some, it feels especially scummy coming from a streamer whom they feel portrays a family-friendly persona. “It’s crazy to think someone like him [NickEh30] would do this, he comes off as the nicest most family friendly content creator but he’s really just faking it,” one wrote on the LivestreamFails reddit.

“If he would cheat when there’s nothing on the line for him then what might he do when there is? This just shows his complete lack of competitive integrity,” wrote a member of the Fortnite competitive subreddit.

Others see landing outside the zone more as NickEh30 and Morgan playing to win by weighing the consequences. “That’s just optimising your chances of winning within the given rules. Don’t hate the player hate the game, etc,” one person wrote on the Fortnite competitive subreddit.

“This is no different than intentionally fouling in basketball to stop a good shot or stop time (or whatever reasons there are),” wrote someone on the LivestreamFail subreddit. “[I]f it is a number of ‘allowed’ warnings, it’s going to happen and can be expected to be abused.”

Some Fortnite fans are particularly mad that NickEh30 and Morgan eliminated popular player Chap during game 3, seeming to surprise Chap and his teammate by coming from outside the zone. “We literally died by people who broke the rules,” Chap tells his partner in a Twitch clip. “They landed outside the zone and then walked in behind us.”

Some blame NickEh30, while others point back to the lax punishment. “Obviously it sucks that Chap essentially died because of it, but that is the fault of the event organisers, not the player who is using his brain to try to win,” wrote one user on the Fortnite competitive subreddit.

Cheating, and how to punish it, is a hot topic in Fortnite. During the World Cup, players XXiF and Ronaldo were suspended from the game for two weeks for cheating. They went on to qualify for the finals, where viewers cheered XXiF’s elimination. Many Fortnite players blamed that situation on the game’s developer Epic for being too lax with its punishments. Recently, Epic clarified the rules related to players signalling each other in official tournament matches, cracking down on long-standing practices that, though they were acceptable in the competitive community, have always technically been cheating.

While Twitch, rather than Epic, set the rules and doled out punishments for the Streamer Bowl, the situation feels like one more example of Fortnite fumbling as it attempts to navigate the world of esports.