Heroes Rising Is So Incredibly Bonkers, It Might Just Break My Hero Academia

Ever since Kohei Horikoshi’s seminal shonen manga, and then Studio Bones’ incredible adaptation of it, hit the world, it feels like it’s just kept powering up, quite like its cast of rough-and-ready wannabe heroes. Now the series’ second crack at the box office continues to amp up the scale, but in doing so it might just break My Hero Academia apart in the process.

Unlike the first My Hero Academia movie, Two Heroes“which was set in the past of the anime’s then-current storyline, sandwiched between seasons two and three of the shows”Heroes Rising is set at an undisclosed future point in the series’ timeline. What that means is that, intriguingly, it takes place beyond what either the TV show (currently airing the second part of its fourth season) or Horikoshi’s ongoing Shonen Jump series (which itself is several story arcs ahead of the show) are currently dealing with.

This creates a relatively blank canvas for Heroes Rising to lay its spectacle-laden action over, but it also creates a fascinating premise just baked into every layer of the film. For fans, this is essentially a sneak peek into the heroes these high school-heroes-in-training will one day become. It’s a window into what their relationships are like with each other, how far they will go, not just in the strength of their superpowers”or “Quirks” as they’re known in My Hero‘s world”but who they will be as people and as members of a team.

The canvas this potential is painted on is a secluded community on Nabu Island. As part of an experience-gaining program with their school, U.A. High, Deku (voiced in Japanese by Daiki Yamashita and in Funimation’s English dub of the series by Justin Briner), Bakugo (Nobuhiko Okamoto/Clifford Chapin), and their friends in Class 1-A are sent to the isolated region to help its community on an agency basis, acting as Heroes for Hire when professionally-licensed heroes are otherwise out of Nabu Island’s reach. Although the island life is peaceful and idyllic”no heroes regularly hanging out means no villains, either”and far away from the ongoing drama stoked by the sinister League of Villains on the Japanese mainland, this is a shonen anime movie, so of course, disaster strikes.

A mysterious new gang of villains led by the enigmatic Nine (Yoshio Inoue/Johnny Yong Bosch) invades the island on the hunt for two youngsters, brother-and-sister duo Mahoro (Tomoyo Kurosawa/Dani Chambers) and Katsuma (Yuka Terasaki/Maxey Whitehead) Shimano, leading Class 1-A headlong into a battle that nothing in their journey so far has truly prepared them for.

Heroes Rising‘s future setting is as surprising as it is beneficial for the overall vibe the movie has. By being able to deftly put aside any of the current plotlines in either the show or the manga, the film has the freedom to deliver a familiar, yet new-feeling, version of this loveable bunch of superpowered teens fans have come to know over the past four seasons (and hundreds of chapters) of the My Hero story. It’s fanservice-y, but in an intriguing way; it’s very cute that the explosively angry loner Bakugo is now in a place where he actually knows his fellow classmates’ names and even treats them like friends, or that the icy, self-doubt-driven Todoroki (YÅ«ki Kaji/David Matranga) hasn’t just tempered the balance between his fire-and-ice-slinging Quirk, but can happily work alongside his friends as part of unit.

The things that haven’t changed about these characters, like Deku’s earnest desire to inspire and help those around him, the relentlessly cheery optimism of Uraraka (Ayane Sakura/Luci Christian), or even the paternal, rule-loving leanings of Class mum-and-dad Iida (Kaito Ishikawa/J. Michael Tatum) and Momo (Marina Inoue/Colleen Clinkenbeard), become all the more endearing, like their truest selves have emerged stronger and more defined than ever. These older and wiser iterations of our heroes-to-be also present an opportunity for when the film gets going and Nine’s gang of villains enters the scene: to deliver beautiful, bonkers superhero action on a scale unlike anything seen in the show so far. 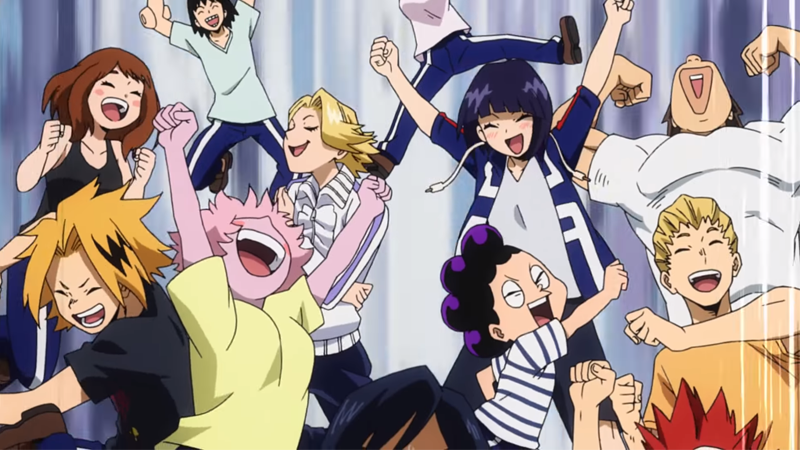 It’s not just because the stakes are raised”Nine represents a threat perhaps close to as (perhaps even just as) dangerous as the sinister All For One did in season three of the show”that the action in Heroes Rising is on another level. It’s because the film revels in using that grand action to show just how much more confident and grown these characters have become at this point in the story as much as it does the sheer spectacle of it all. And it really does get truly spectacular: By the time Heroes Rising hits its climax, the reveals and action on display as Class 1-A squares up against Nine for the final battle are just nonstop kinetic frenzy, layered with some reveals about our heroes that are as brain-poppingly audacious as the action that unfolds around them is eye-searing. It’s My Hero Academia on a level you’ve really, really never seen before, whether you only follow along with the show or are a diehard follower of the manga.

Incredible spectacle aside, what makes Heroes Rising‘s action truly shine is that it uses it celebrate just what a cohesive unit Class 1-A has become when working with each other, driving home My Hero Academia‘s potent themes about teamwork and the power of co-operation trumping any individual superpower”even the might of Deku’s legendarily inherited One For All abilities. Outside of a character level, what this means is that every individual member of the class”from the big hitters like Deku, Bakugo, Uraraka, and Todoroki, to beloved but mostly background supporting stars like Kaminari (Tasuku Hatanaka/Kyle Phillips), Mina (Eri Kitamura/Caitlin Glass), ShÅji (Masakazu Nishida/Ian Sinclair) or KÅda (Takuma Nagatsuka/Greg Ayres)”gets multiple moments to shine, whether it’s alone or as part of the wider group.

Two Heroes, often to its detriment, felt like a story centered primarily around Deku’s relationship with his heroic tutor, All Might (Kenta Miyake/Christopher Sabat), giving him the spotlight at the expense of pushing aside his friends and classmates. Heroes Rising feels like a welcoming course-correction in the opposite direction”still giving Deku a starring role (he is the lead character, after all) but better enmeshing him alongside the rest of his friends. As a whole, they stand together much more strongly than they do as individuals. 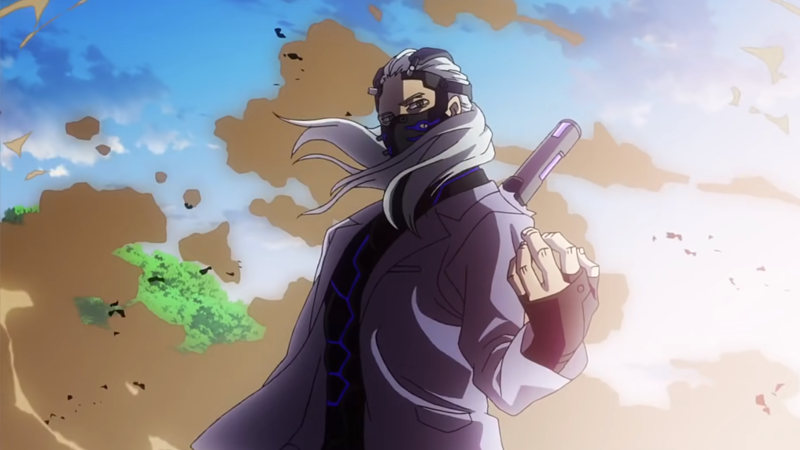 Nine represents an intriguing, horrifying new threat to not just our heroes, but all of the hero world. (Image: Toho/Funimation)

But as delightfully promising, and freeing, as this future-set premise is, it’s also Heroes Rising‘s greatest weakness, especially when it asks you to contemplate some of its earth-shattering reveals about the franchise’s most important worldbuilding. This freedom to play with its protagonist’s futures and the scale of the threats they’ll face creates a paradox that, even at its wildest, most fan-pleasing moments, threatens to undo the goodwill Heroes Rising brings to the table with its over-the-top action and insight into My Hero‘s world. Everything that happens on-screen for the stars in this movie feels extremely important in the moment; a window into the future of the powerful, heroic personas these characters will one day occupy.

But because of its nebulous place within the series’ timeline, or the lingering doubts about just how canonical the events of the film are considered to be with either the TV show or the manga (some elements of Two Heroes and now Heroes Rising have begun to creep into the latter, sowing even more confusion) can make some of its most shocking reveals simultaneously audacious and blunted. Instead of coming out of the theatre with their minds blown by what’s just unfolded, hardcore fans of the series might find themselves working each other up into a state of confusion as they try to figure out if what they just saw, as explosive as it was, will actually matter for the series as it moves forward. 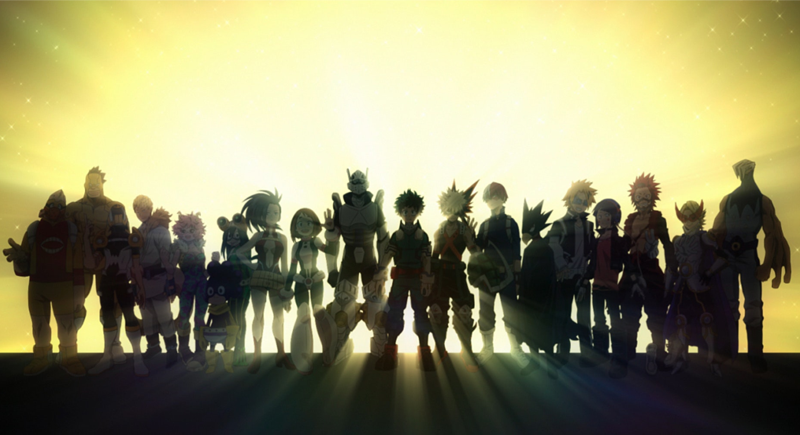 They really do go beyond this time, those crazy kids. (Image: Toho/Funimation)

My Hero fans will be talking about what Heroes Rising means for the series at large for a good while yet. Depending on where you land about some of its potentially game-changing twists, it could point to hope or disappointment for the franchise’s future. But at least fans should probably be able to agree on one thing about it wherever they sit over its grander reveals: On a primal level, it is still an absolute blast to watch these characters come into their own as heroes and unleash their powers in glorious, bonkers action time and time again.

My Hero Academia: Heroes Rising begins screening in a limited capacity in both subtitled and dubbed formats in March.