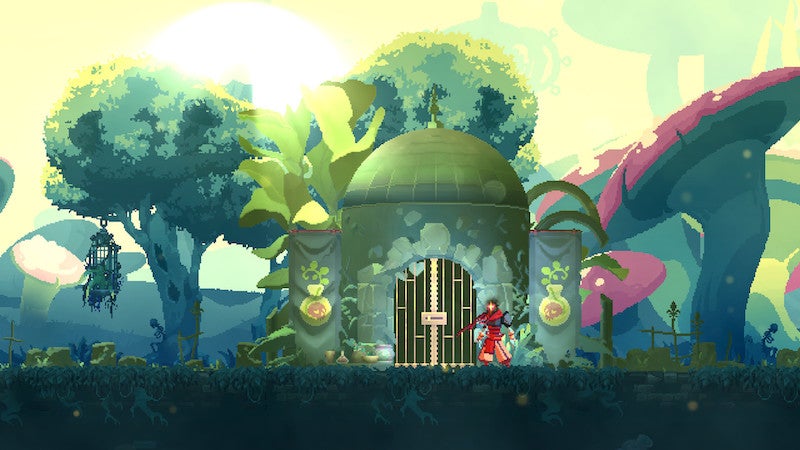 Screenshot: Motion Twin, <a href="https://store.steampowered.com/app/1204130/Dead_Cells_The_Bad_Seed/">Steam</a>
To sign up for our daily newsletter covering the latest news, features and reviews, head HERE. For a running feed of all our stories, follow us on Twitter HERE. Or you can bookmark the Kotaku Australia homepage to visit whenever you need a news fix.

Dead Cells is a satisfyingly complex roguelite with fast-paced combat, Metroid-style exploration, and gorgeously rendered medieval environments. It will also kick your arse in a thousand ways. This week, Dead Cells added yet another method of arse-kicking: Mama Tick.

Mama Tick is the boss of “Bad Seed,” the new Dead Cells DLC that’s out today for PC, PlayStation 4, Xbox One, and Nintendo Switch. For $US5 ($7), you’ll get access to two new biomes, a bunch of new weapons and powers, and one doozy of a mid-game boss.

At first glance, Mama Tick looks like a cakewalk. There’s a singular eyeball on one end of the stage, and it doesn’t really do much. But once you’ve made a dent into her health bar, she’ll do that really annoying thing video game bosses do and become a bigger, badder, meaner, tougher contender.

For the most part, Mama Tick attacks with her “arms,” two enormous, spindly scythes that can wipe your whole health metre if you’re not careful. Her most annoying move is a bullet-storm type attack in which scythes come up from the ground at a relentless pace. Thankfully, the attacks are telegraphed via exclamation points on the ground. Act fast, and you’ll be able to dodge them just fine. I’m sure there’s some sort of pattern. But, to be honest, you needn’t waste a second trying to learn it. Just watch for exclamation marks on the ground and roll around like you just unlocked the morph ball in Metroid Prime.

When it comes to dealing damage yourself, having a solid projectile-based ability is essential. That way, you can focus solely on dodging her attacks while still dealing damage. The Double Crossb-o-Matic is an excellent choice, if you can find one. But the Heavy Turret or the Sinew Slicer will do the trick, too.

Using an electric attack—like Lightning Bolt, the Palpatine Hands of Dead Cells—will electrify the water, dealing some meager yet consistent damage. The point is, as you’re making your way through the expansion’s new stages, like the Dilapidated Arboretum and the Morass of the Banished, be on the lookout for any gear that can constantly whittle down Mama Tick’s health bar.

Tactics aside, the single best thing you can do to beat Mama Tick is to get yourself a Death Orb, a rare ability that wreaks havoc on anything in its path. Death Orb, which lasts for about 10 seconds and has massive DPS, is big and slow-moving and works best on big, slow-moving targets. Exhibit A: Mama Tick.

Yes, gear in Dead Cells is randomised. You can’t really do much if the game insists on sticking you with various versions of the Infantry Grenade. But if you focus on finding stuff that allows you to keep your distance, you’ll be well-positioned for victory against Mama Tick. Plus, if you’ve completed the vanilla playthrough, you should have unlocked the ability to “refresh” shops (for a fee, of course) and get a new selection of gear to choose from. Make liberal use of that.

Defeating Mama Tick will earn you a schematic for the scythe, the first two-handed weapon in Dead Cells. It’s extremely powerful, and will help you clear out rank-and-file enemies in subsequent runs. But the scythe is slow, and, since it’s a melee weapon, requires you to get up close to your enemies.

In other words, it won’t help you one bit in your future attempts at taking down Mama Tick. Sorry!