I Tried More Weird Cereals So You Don’t Have To

The world of breakfast cereal is an ever-changing battle ground, ruled by dependable classics and littered with the broken boxes of sugar-coated newcomers. Only you, the consumer, can shape the outcome of this century-long struggle to rule “the most important meal of the day.”

One year ago that I sat down to review seven of the most intriguing cereals I could find on U.S. store shelves, and now… I’m back to do it again. Things have not gotten better, my friends. If anything they’ve gotten worse. Sour Patch Kids Cereal is still in existence. There’s now a Baby Shark cereal. I’m the only one who seems to buy Honey Nut Oh’s. I fear for the future of our society.

So here they are — seven more cereals you might consider putting in your mouth. At least this time I was smart enough to not buy “Family Size” boxes if it could be helped.

Let’s start with the best. 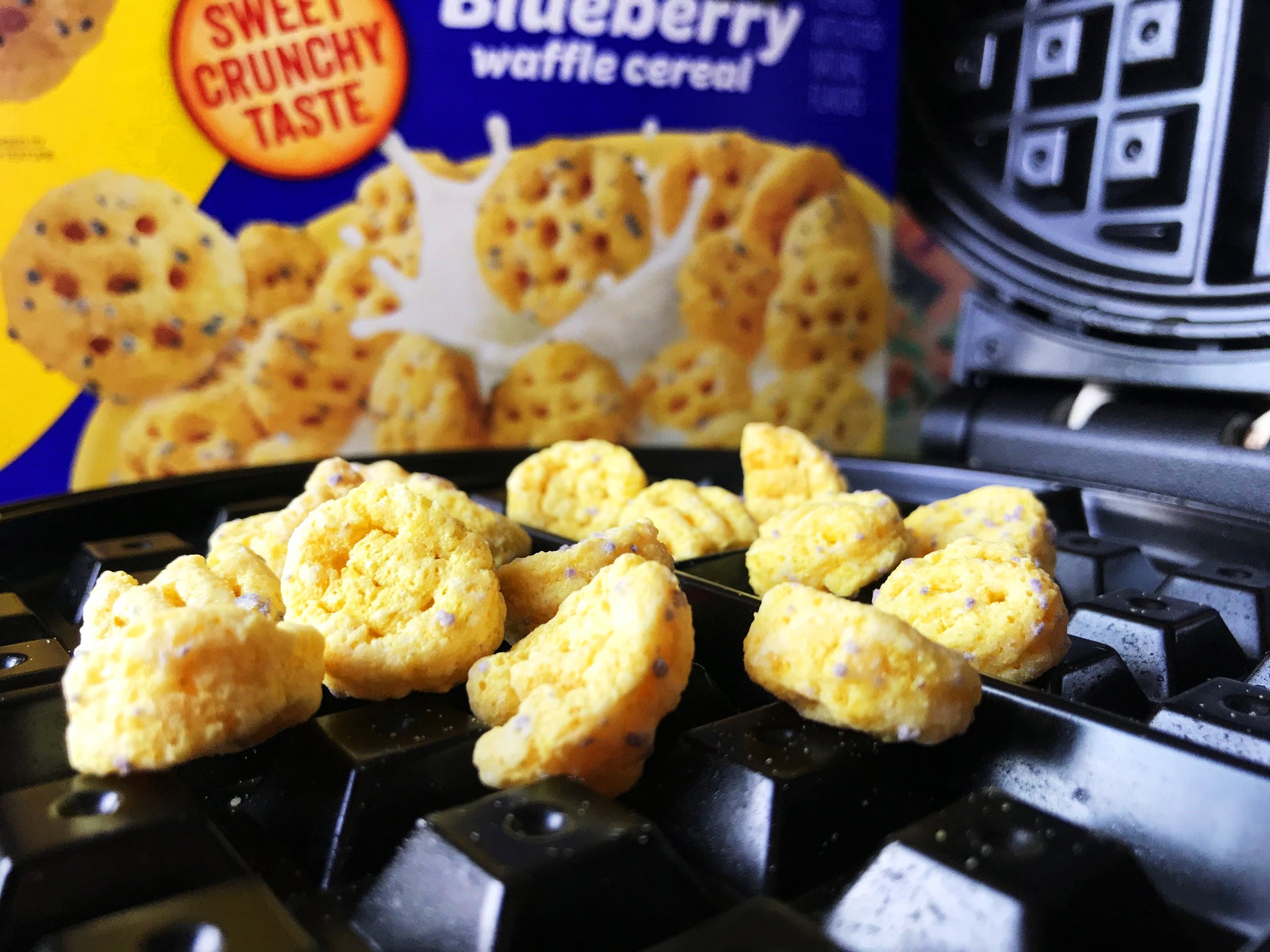 Initial Thoughts: Waffle cereal has been done before. As I stood deciding between Eggo’s two cereal flavours (Maple or Blueberry) I was almost certain I had tried something similar in the not too distant past. Obviously it hadn’t made much of an impact on me, as I couldn’t recall its name. But hey, I would be lying if I said I wasn’t already an Eggo waffle fan. After cereal, toaster waffles are my go-to breakfast food, so the combination of both could be a match made in heaven.

After Eating: The best part about Eggo Blueberry Waffle Cereal is that it doesn’t beat you over the head with its blueberry flavour. It is equal parts fruity and… waffley? This distinction makes it both a darn good cereal and a decent substitute for legitimate waffles. Eggo’s newest morning meal toes the line between sugary treat and respectable breakfast meal an adult might consume. I was thrilled that I could slurp down an entire bowl without feeling my teeth begin to rot.

Verdict: Eggo Blueberry Waffle Cereal is worth trying, assuming you don’t have normal blueberry waffles on hand. You won’t be blown away, but you’re bound to be satisfied by the amount of tiny waffles you can jam in your gullet. 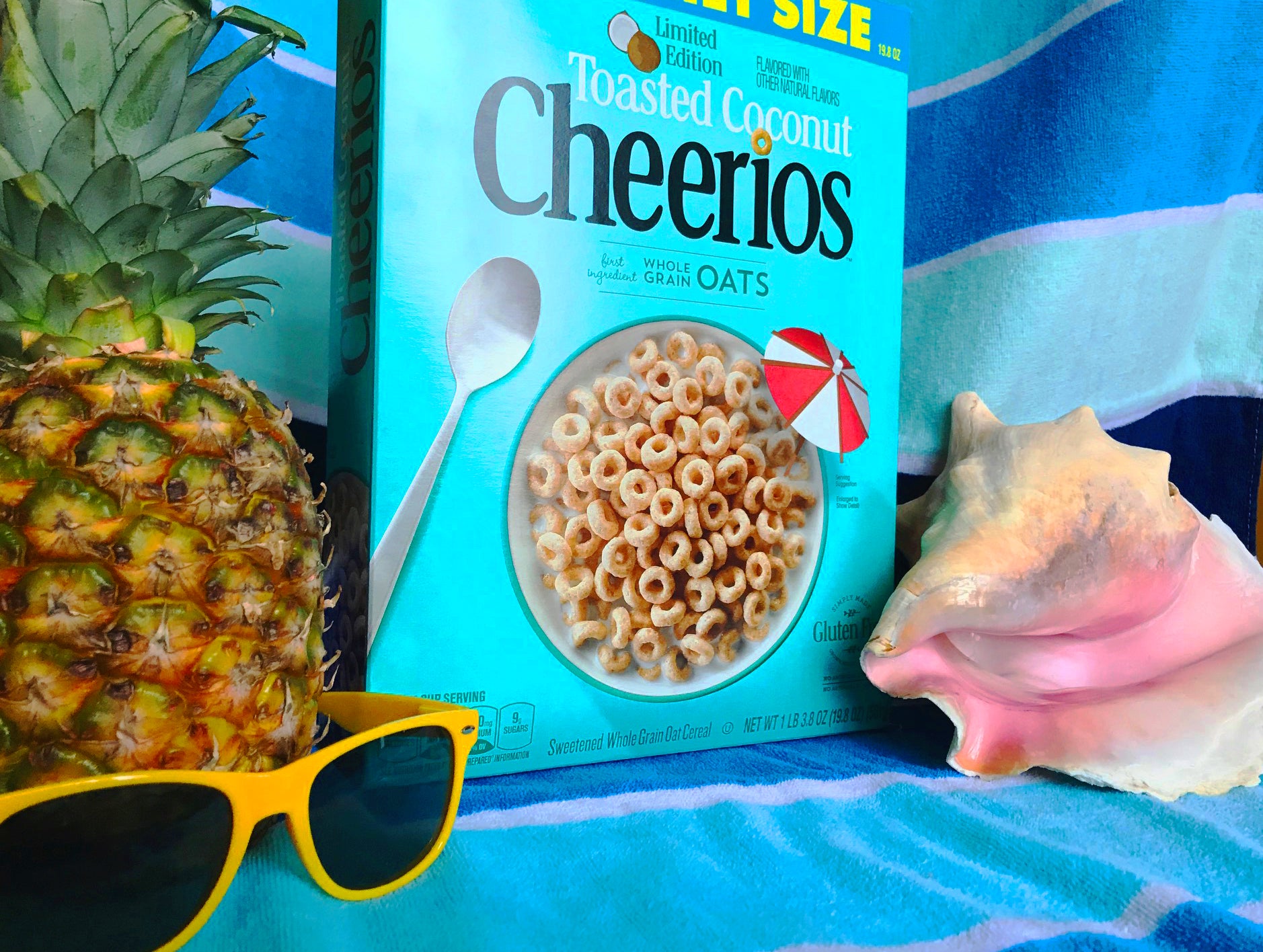 Initial Thoughts: Toasted Coconut Cheerios was the last box picked for the second round of my bold cereal review. One might think this was because Toasted Coconut just isn’t wild enough, but it’s actually because my wife wouldn’t stop recommending it. See, I don’t like coconut, but my wife does. She was adamant she would finish these Cheerios off if I didn’t. Eventually I relented, mainly because Cheerios sub-genres are usually pretty dope. Honey Nut, Apple Cinnamon, Frosted, Medley Crunch — all quality spin-offs. Could cheerios change my outlook on coconut?

After Eating: Cheerios have changed my outlook on coconut. Well, toasted coconut cereal at least. Though my initial smell test upon ripping open the bag raised some red flags, I was pleasantly surprised by the mild coconut flavoring mixed in with the classic Cheerio taste. There is, however, a twist ending to this joyful revelation. Toasted Coconut Cheerios are fantastic dry, but actually seem to lose a bit of their lustre when doused in milk. As I finally dug into a proper bowl, I couldn’t help thinking, “Hmm, this just isn’t as good.”

Verdict: Toasted Coconut Cheerios are the best dry snacking cereal on this list, and probably the best for you at that. They get the job done as a morning meal, and they’re not too coconutty for an uncultured putz like me. 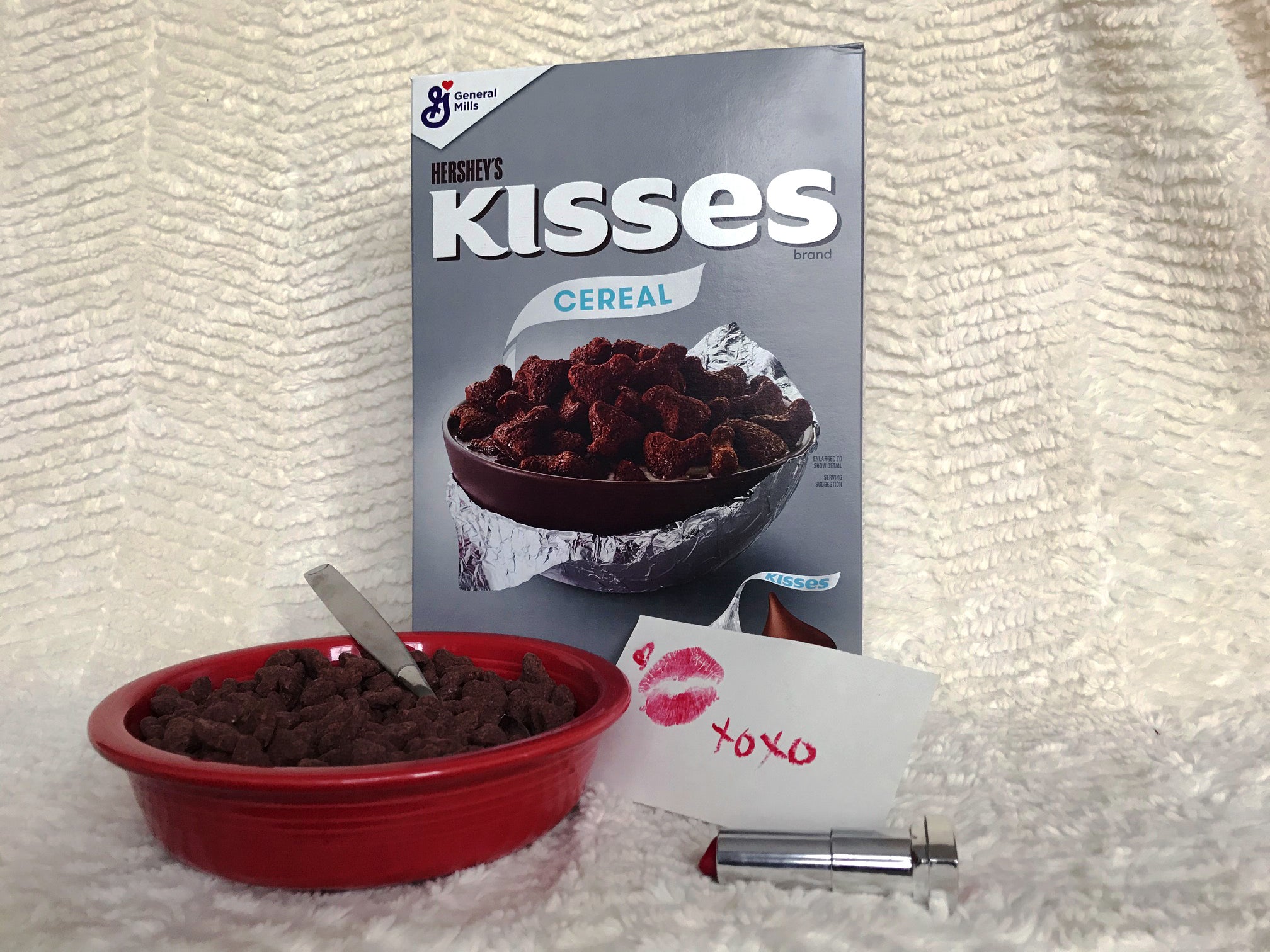 Initial Thoughts: Reese’s Puffs seems to have started the “candy for breakfast” revolution, so I guess we can hold them accountable for Kisses Cereal. And while I enjoy the occasional peanut butter-blasted puff, I’ve never been much of a chocolate fan. I mean, it’s a fine treat now and then, but I’d much rather indulge myself with fruitier flavours. Kisses Cereal appeared to be a safe, if not underwhelming, choice. It seemed nearly impossible that General Mills could mess this one up.

After Eating: If you’ve ever eaten Cocoa Puffs or Count Chocula, then you’ve essentially tasted Kisses Cereal. That being said, there is something a bit more sophisticated about Hershey’s take. Maybe it’s the slightly richer taste. Maybe it’s the fancy box without a bird or vampire hocking their sugary wares. Maybe it’s the little kiss shaped bits that definitely don’t resemble tiny mounds of poo. Whatever it is, it forced me to eat two bowls in one sitting.

Verdict: If you’re the kind of sick freak who enjoys chocolate for breakfast (or a moderately sane person who enjoys it for a snack) then you should give Kisses Cereal a go. It’s probably the best purely chocolate cereal available. 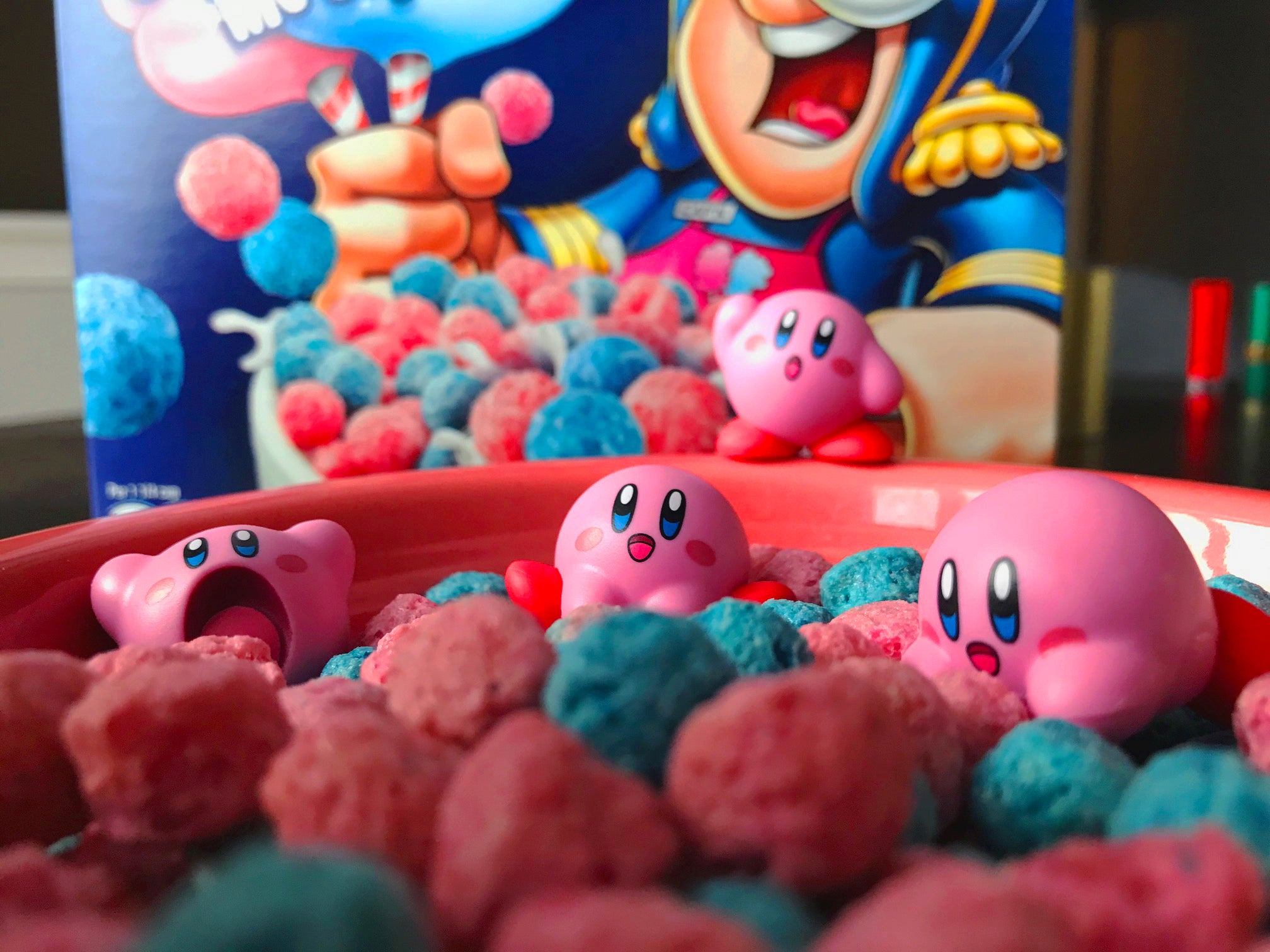 Initial Thoughts: Cap’n Crunch’s Cotton Candy Crunch cereal seems to contain an unhealthy amount of food colouring and alliteration. The Cap’n Crunch brand has been around for half a century and in that time it has released some wacky variations. Remember Deep Sea Crunch? Galactic Crunch? How about Mystery Volcano Crunch? I thought not. Since the esteemed Cap’n tends to play fast and loose with most of his newest flavours I wasn’t expecting much from

Cotton Candy Crunch. It would probably taste like heaps of sugar. I was sure my dentist would be thrilled.

After Eating: The carnival is back in town. The good news is Cotton Candy Crunch tastes exactly as one would hope, like a mouthful of crispy cotton candy pellets. Much like its Oops! All Berries brethren, this form of Cap’n Crunch is rounded, so there’s no fear of cutting your mouth. I was decently pleased with my first bowl, but found myself selecting other cereals on consequent visits to the pantry. Cotton candy is a wonderful treat now and then, but I can’t say I would want it invading my mouth every morning. It seems to be a snack best chosen in the moment.

Verdict: You could do a lot worse, but Cotton Candy Crunch is far from the best iteration of Cap’n Crunch on the market. If you’re a big fan of cotton candy it may be worth your hard-earned cash.

Initial Thoughts: Everyone loves llamas, right? No, really, I’m asking. I need to figure out why this cereal exists, and why Kellogs felt it necessary to put llamas in the title of this “special edition” cereal. There’s no denying it’s a cute name, but couldn’t they have branded it as something more universally enticing and simply introduced an adorable llama mascot? Regardless, I was intrigued by the cereal’s claim that their titular loops were topped with “glittery sparkles.” Not sprinkles, like on a cupcake — sparkles. Perhaps Llama Loops could spark joy.

After Eating: I’m sad to report I really couldn’t taste the sparkle on these bad boys. Llama Loops are essentially a pungent version of Fruit Loops with far less variety. I will say that, unlike Toasted Coconut Cheerios, Llama Loops get substantially better once milk had been applied. It’s almost more of a desert than anything, and far from part of a balanced breakfast. Though I could probably say the same about nearly every cereal on this list.

Verdict: One of the llamas on the Llama Loops box is wearing sunglasses and that is very cool. Llama Loops themselves are just fine, if not a bit overwhelming. 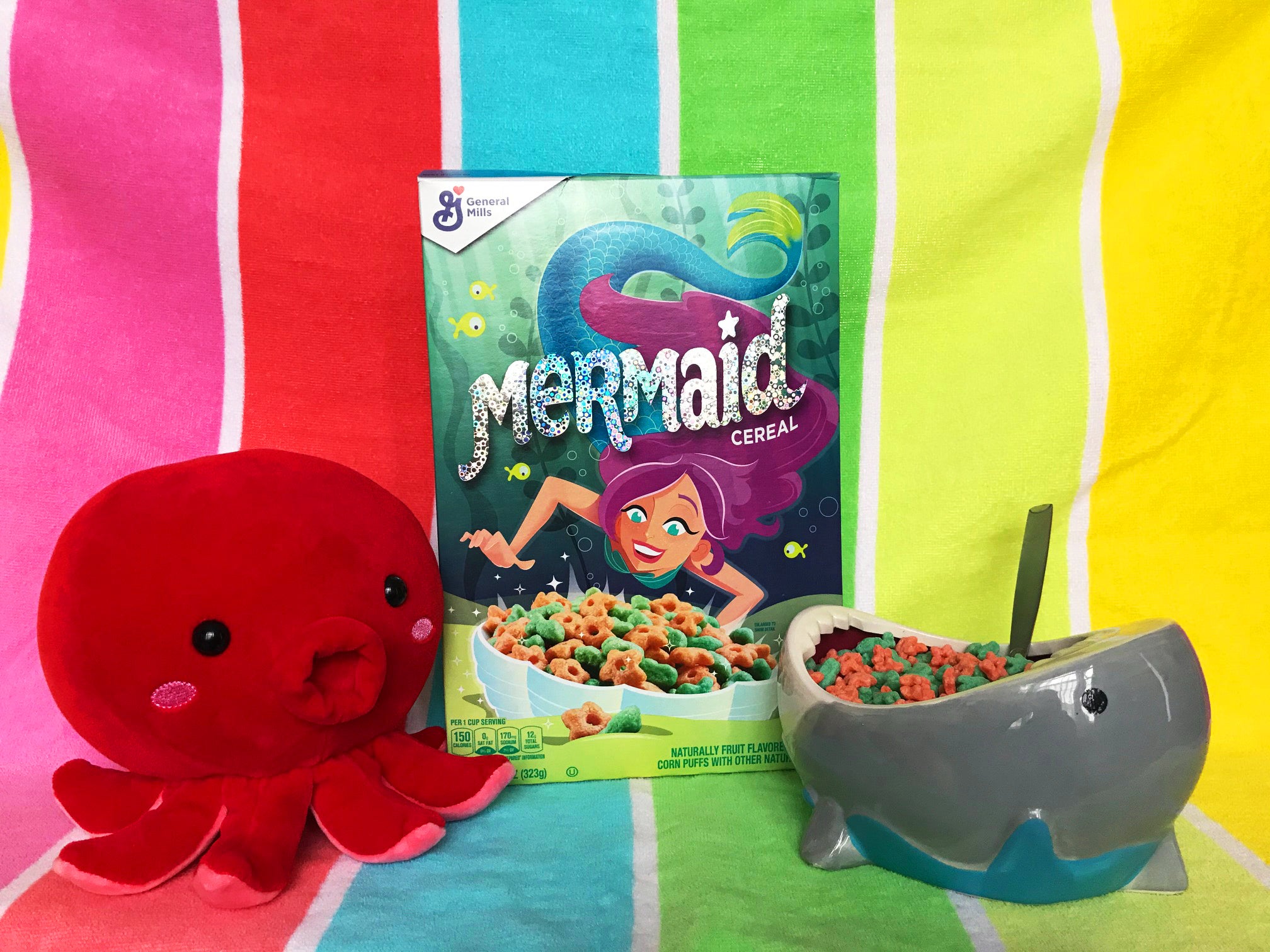 Initial Thoughts: Mermaid Cereal is easy to spot on the grocery store shelf. Its shimmering text is reminiscent of the classic children’s book The Rainbow Fish, and I’m sure that’s no coincidence. At first I was under the impression the cereal was promoting some new show or toy line, but upon closer inspection it seemed Mermaid Cereal was simply willed into existence by mermaid fans. Or maybe it was made from the bones of a mythical fish woman. The box says it contains “naturally fruit flavored sweetened corn puffs with other natural flavours,” so… you never know.

After Eating: If you’ve ever eaten Lucky Charms and complained about its abundance of marshmallows, do I have the breakfast meal for you. Like most sugary cereals targeted at children (I’m looking at you Llama Loops), I was anticipating Mermaid Cereal to go a tad over the top in the flavour department. Mermaid Cereal is worse that overwhelming — it’s boring. After eating a bowl I wasn’t even sure what “fruit flavours” I was supposed to be tasting.

Verdict: Mermaid Cereal is shockingly subdued. It’s all sparkle and no substance. General Mills should have sprung for a more outlandish underwater taste like shrimp or octopus. At least that would be interesting. 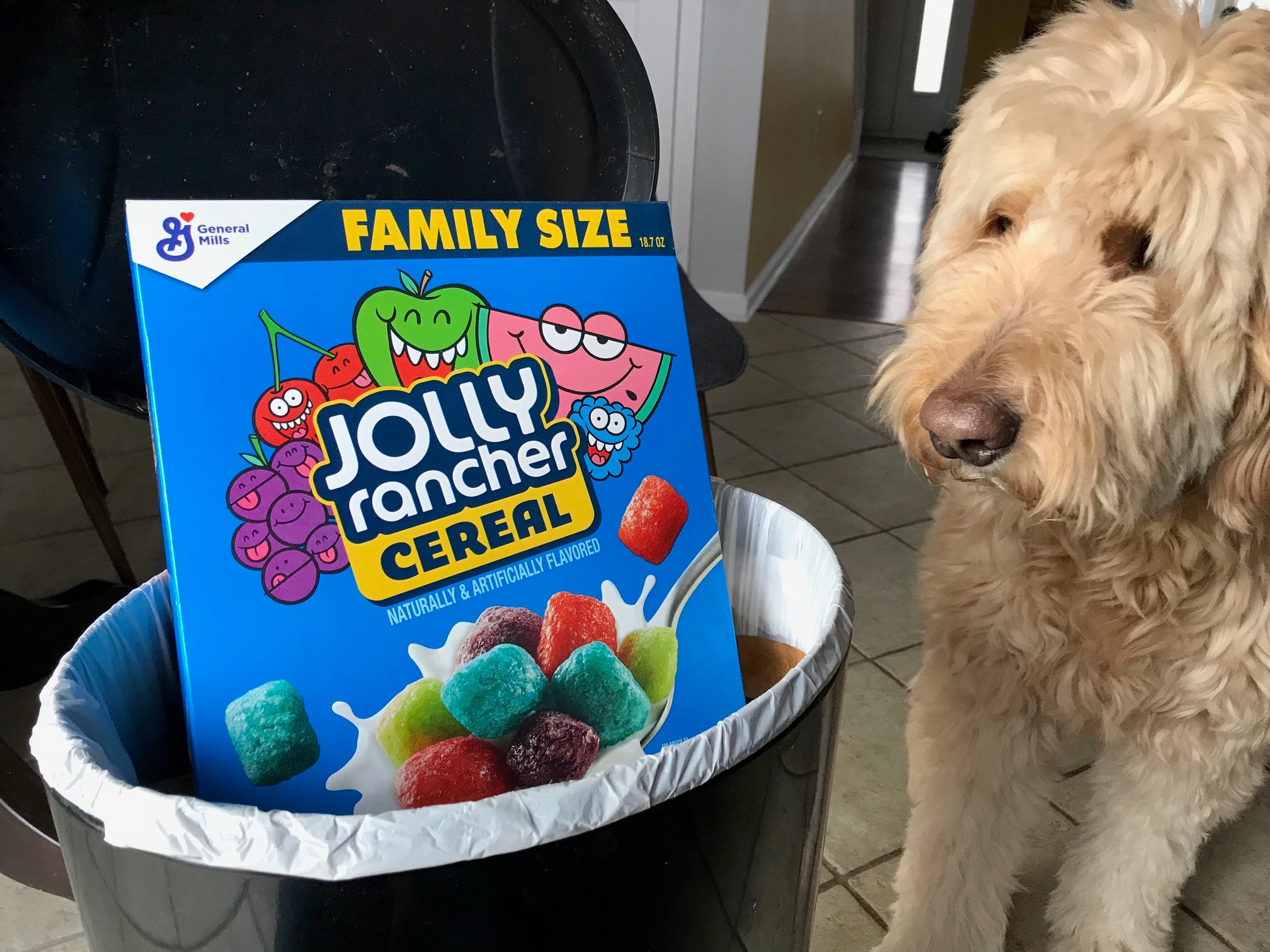 Initial Thoughts: I was aware of Jolly Rancher Cereal for a few weeks before I begrudgingly dropped it into my cart. Every time I spied it I would shutter and walk away, thinking, “Well, at least I’ll never have to try that garbage.” But then I was given the green light to write this feature and curiosity got the best of me. The back of the Jolly Rancher Cereal box reads, “We’ve got a hunch that you’ll love it a bunch…” Which is a bold statement, considering every part of my brain was screaming the exact opposite.

After Eating: Remember when I mentioned I loved fruity tastes over chocolate? This isn’t what I meant. This isn’t what I wanted! Much like Sour Patch Kids Cereal, I must applaud General Mills on their ability to make a cereal taste so similar to its source material. Each colourful nugget has been coated in a sour syrup that assaults the mouth and, this is not a joke, leaves your tongue with a uncomfortable buzzing feeling. It’s what I imagine eating a swarm of bees might be like. You know, if they fell in a vat of molten Jolly Rancher.

And thus ends the the most recent exploits of my ongoing cereal adventures. There were certainly more winners than losers this time around. Maybe things in the American cereal world aren’t as bad as they seem. Or maybe I just happened to pass over the really weird choices. Either way, hopefully I’ll see you all in 2021.