If You Like Celeste But Wish It Had More Swords, Try Scourgebringer 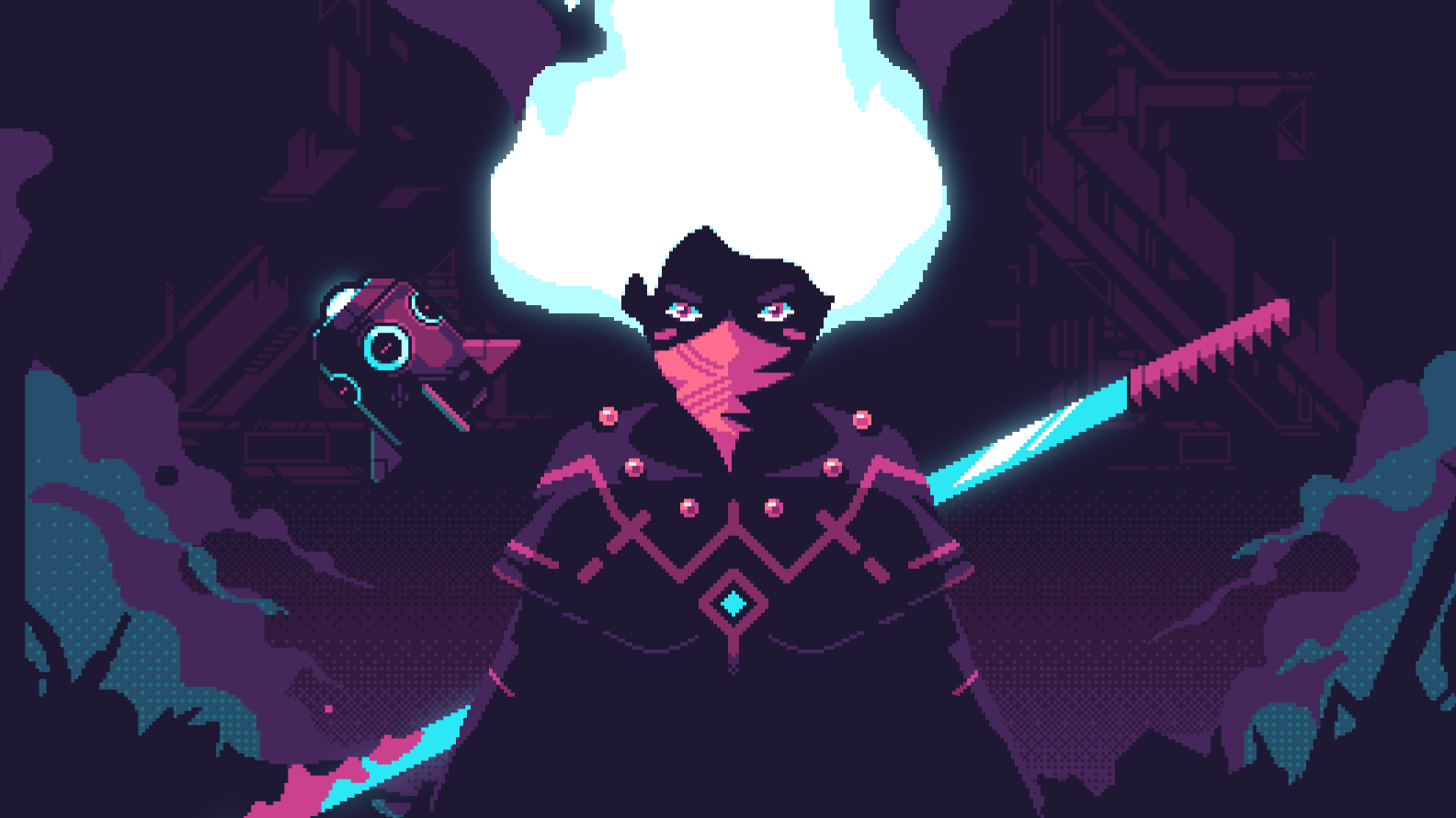 It only took about 15 minutes of zipping around in Scourgebringer for my fingers to start feeling sore. One moment, bell chimes were echoing through a peaceful room. The next, I was tearing through enemies in every direction while some heavy metal kicks up. I’ll strap ice to my knuckles if that’s what it takes to keep going because Scourgebringer is worth it.

Out yesterday in Early Access on Steam and Xbox Game Pass for PC, Scourgebringer is a roguelite that melds together platforming and combat. Your dash doubles as a forward attack and can be launched in any direction, even lifting you high up into the air if need be. Your sword slashes pull you slightly toward enemies and mitigate your descent, as if you were a tiny comet whipped into orbit around them as you pass by. It all feels a bit like an aerial ballet built around hack-’n’-slash combat; Golden Axe meets Crouching Tiger, Hidden Dragon.

You play as Kyhra, a white-maned warrior sent to unravel the mystery within a giant monolith, the previous explorers of which never returned. A tiny pixel sprite, she double-jumps, wall climbs, and is handy with a blaster when her katana won’t do the trick. Khyra feels like a kindred spirit to Celeste’s Madeline. She’s similarly floaty and agile, but her movements are all accompanied by the sharp end of a blade. I’m hardly the first to compare Scourgebringer to 2018’s excellent puzzle platformer, but it earns the resemblance.

The thing I love most about Scourgebringer is that enemies don’t hurt you when you run into them. Only colliding with their attacks will deplete your health metre, leaving you free to try to get in close, land a heavy blow to stun them, and then go to town shredding them like last year’s tax returns. A combo upgrade you get early on rewards you for chaining together different types of attacks without taking damage, and every hit restores ammunition for your gun, letting you take a step back every now and then to light the place up from afar. 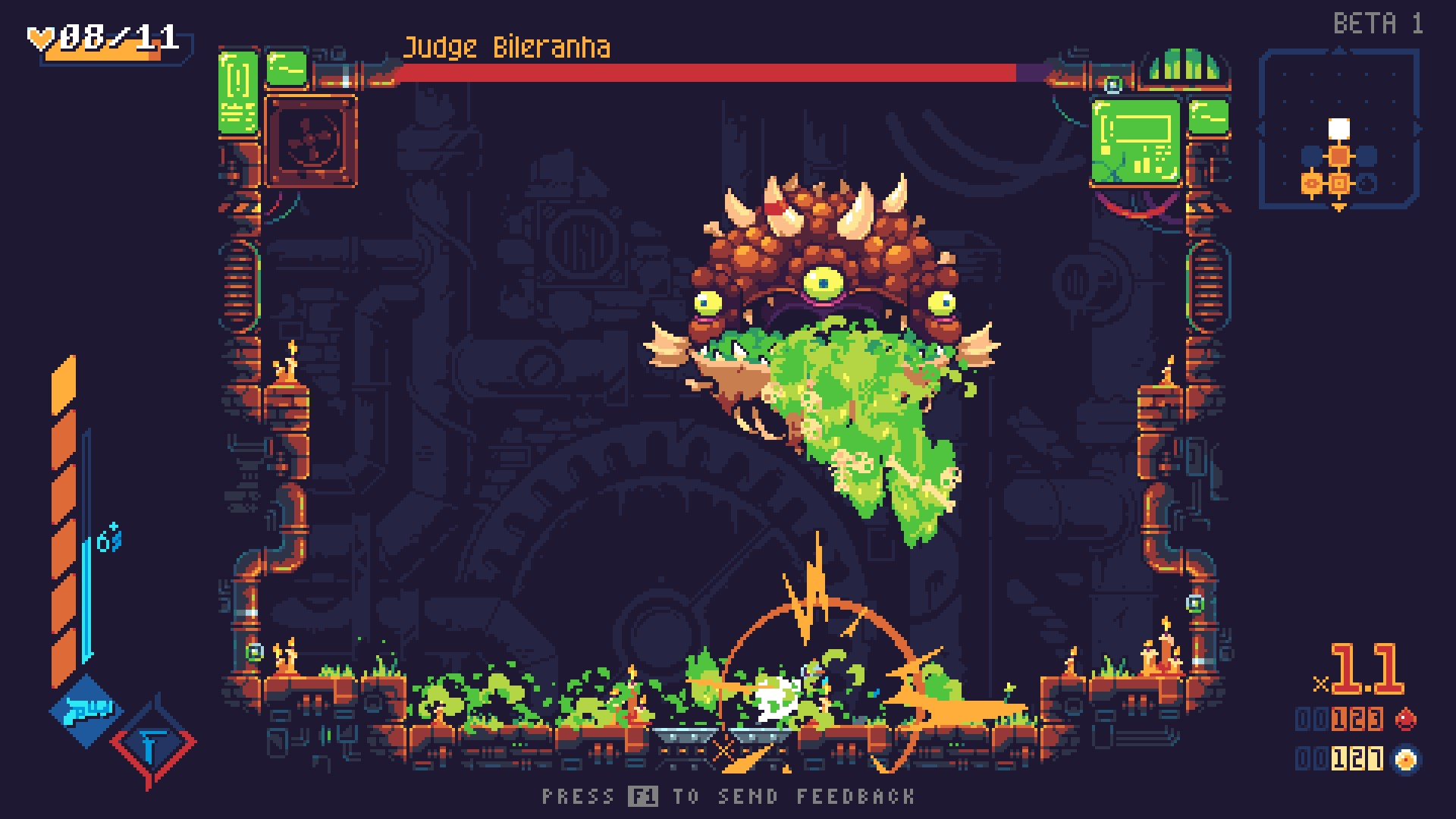 The monolith itself is composed of dozens of procedurally-generated rooms spread out across multiple floors. Each one is composed of a boss, a mini-boss, a merchant, and an altar. Enemies drop blood, which can be used to purchase extra health or better weapons. The altar lets you choose between a random set of upgrades, like longer stun times for your heavy attack or doubling the amount of blood you currently have on hand.

Once you die, you’re sent back to a magical tree buried somewhere deep within the monolith. From there, you can use the orbs you’ve earned defeating bosses to unlock parts of a skill tree. While all of your other progress is lost, these new abilities stick with you, making each subsequent expedition a bit less punishing.

In theory, at least. After two hours I’ve only managed to beat the first boss. Fortunately, Scourgebringer’s snappy controls and beautiful pixel art are just as satisfying in death as they are in life.

More twitchy roguelites that will chew you up and spit you out:

Wizard Of Legend Lets You Play As A Magical Jedi

Image: Contingent99 (Wizard of Legend) Wizard of Legend is straightforward: go in a room, unleash your awesome spells to kill everything in it, and then collect the spoils before moving onto the next. There's no armour to upgrade or stats to manage, just a ton of magic-fuelled carnage. It's all very repetitive, but the game's action feels so satisfying I haven't found myself getting bored of shredding demonic knights and giant enemy blobs with deadly combinations of ice spears and lightning blasts.

I Am Going To Play A Ton Of Hades

Hades, a new action game from Supergiant Games, released in early access last night in the new Epic Games store. It's pretty limited right now, but even with only a handful of weapons and levels it's got me extremely excited. Being trapped in Hell and dying over and over has never been so fun.

In my first game of Dead Cells, I died after about four minutes. In my most recent one, I lasted almost an hour. The time difference between those two attempts says a lot about how Dead Cells evolves as you play it, and how you evolve alongside it.