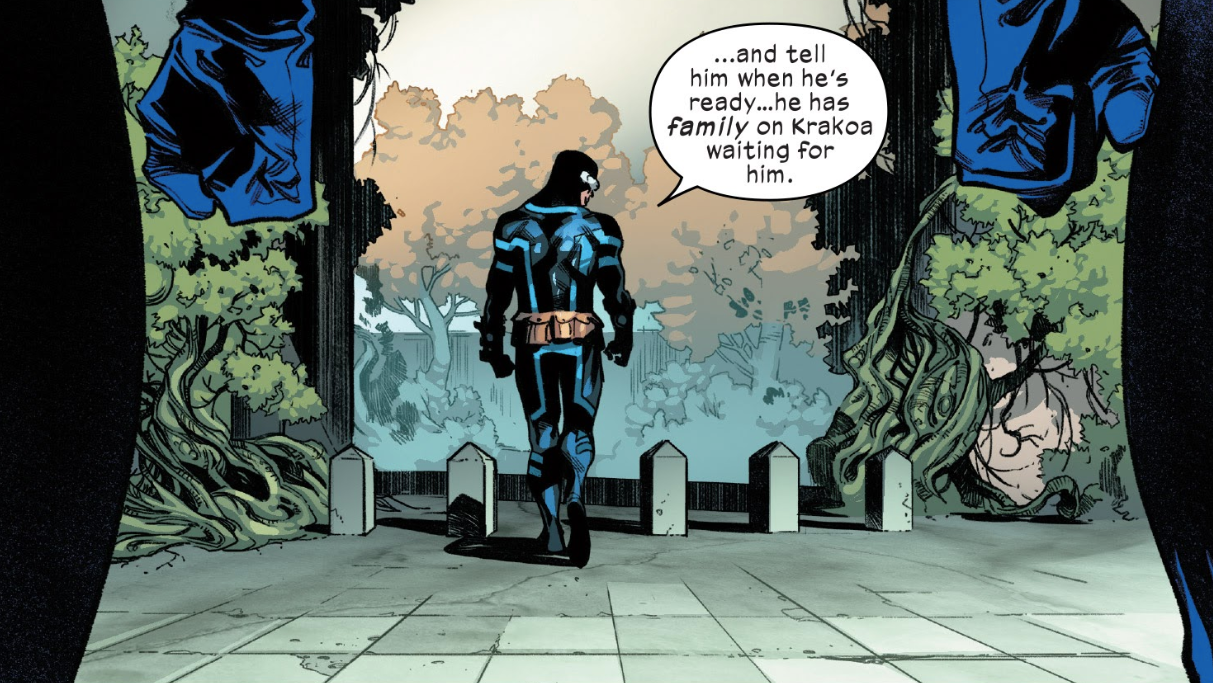 Cyclops letting the Fantastic Four know that the X-Men will be coming for Franklin. (Image: Pepe Larraz, Marte Gracia, Marvel)
To sign up for our daily newsletter covering the latest news, features and reviews, head HERE. For a running feed of all our stories, follow us on Twitter HERE. Or you can bookmark the Kotaku Australia homepage to visit whenever you need a news fix.

When the superheroic couples in Marvel’s comics end up having kids, their offspring tend have the uncanny habit of manifesting outsized, superhuman abilities that dwarf those of their parents. So powerful are these children that, generally speaking, they never hang around for too long before being flung into some distant, alternate reality’s future so that a comic’s core characters can get back to participating in plot lines that aren’t actually meant to end or change all that much.

Superpowered legacy kids are almost always more than the sum of their parents’ collective talents (see: the Grey/Summers genetic line), but in the case of Franklin Richards”son of Fantastic Four founding members Sue Storm and Reed Richards”the story is markedly more complicated and convoluted. Like his parents, Franklin’s powers were the product of cosmic radiation, but unlike Sue and Reed, Franklin was born with an X-gene, making him a mutant like Charles Xavier.

Franklin being a reality-warping mutant child with basically unlimited potential to create and destroy entire galaxies is peak comics nonsense. But it’s made all the more ridiculous by the fact that his power set has made it tricky to incorporate him into stories without the character sucking up all the oxygen in the room. However, over the past few years, Marvel’s been gradually revamping Franklin in ways big and small in order to create a path for him to become something of a more consistent presence within the larger multiverse.

For the bulk of his life, following his first appearance in Stan Lee and Jack Kirby’s Fantastic Four Annual #6 back in 1968, Franklin functioned as a kind of living MacGuffin (in the narrative sense). His impressive psionic powers made him the target of villains like the alien Annihilus and Onslaught, a psychic fusion of Professor X and Magneto, and Modulus, a being Franklin willed into existence in order to give his heroic parents more of a reason to pay attention to him. Though Franklin’s parents made a habit of never willingly involving him in their hero work at his grew older, whenever he found himself pulled into the mess of things, he was always able to emerge victorious alongside Marvel’s other heroes.

But all of that changed during the buildup to 2015’s Secret Wars event in which parallel Earths from different realities began smashing into one another. As it became increasingly clear that the multiversal incursions were not going to let up”and if left unchecked, they would lead to the end of the multiverse”Reed Richards devised a number of potential plans to save his world, one of which involved Franklin. The child’s ability to create entirely new universes simply by thinking about them had previously been framed as a kind of foreshadowing to the kinds of even more formidable, godlike powers he’d one day grow into, but in that moment, Reed saw his son as viable means of ensuring their universe’s future. If Franklin could will a new universe into existence, then everyone might just have been able to simply hop into it, escaping the incursions’ destruction. 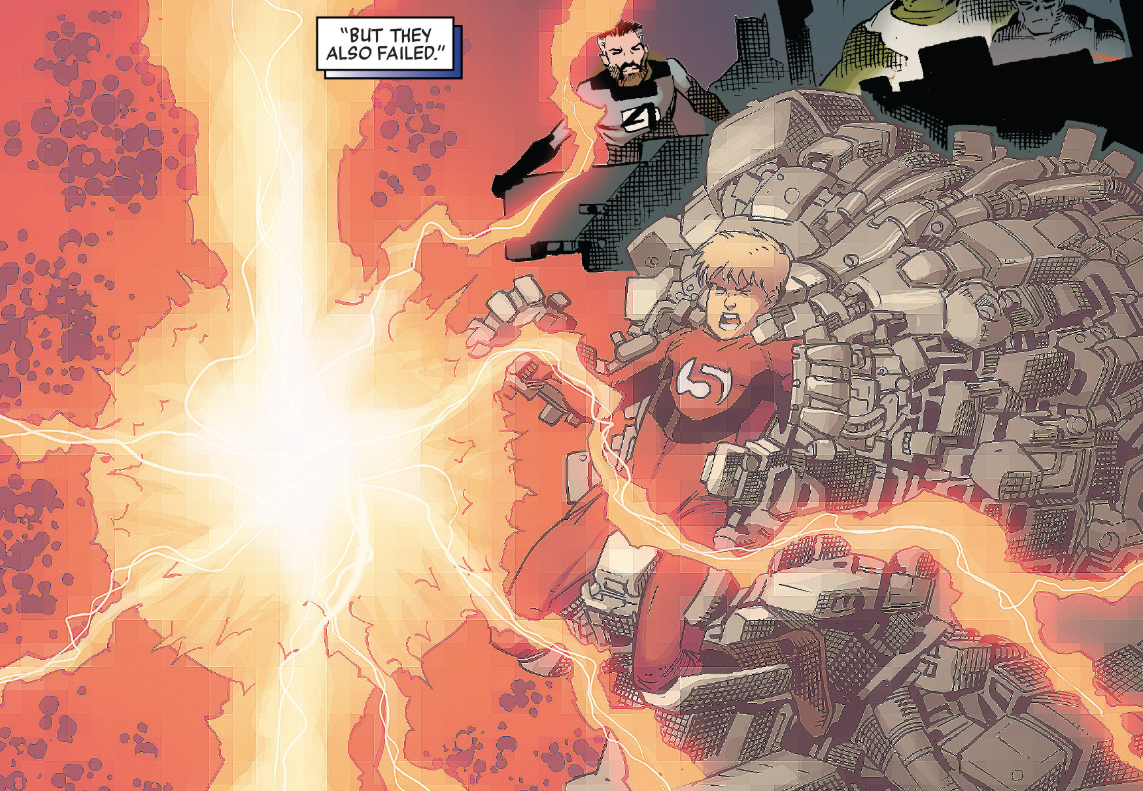 Though Reed’s eventually able to devise a plan that’s meant to ensure the survival of a sliver of the universe’s population, a freak accident leads to everyone dying”including Franklin”save for Reed himself, Black Panther, Namor, the Maker, Peter Parker, and Miles Morales. Together, the six heroes ultimately figure out a way to save their reality, and Secret Wars closes out with the Richards family reunited and readying themselves for a mission to create the new multiverse and their plan is similar to the Franklin-centric one Reed initially thought of.

Franklin might not have had the steam to save the multiverse from total destruction, but his talent for creating new cosmos made him the perfect candidate to populate the whole of reality with new, fantastic worlds that, if left to their own devices, would go on to flourish and fill with life. For a time, Franklin found new purpose alongside his family and friends as they created new universes and travelled into them to make sure that things were running smoothly before moving on to create the next. Before long, though, that particular aspect of Franklin’s abilities began to wane, which prompted the entropy-obsessed Griever at the End of All Things to make a move on the boy and his allies and destroy all of the good work they’d done to restore reality to relative normalcy. 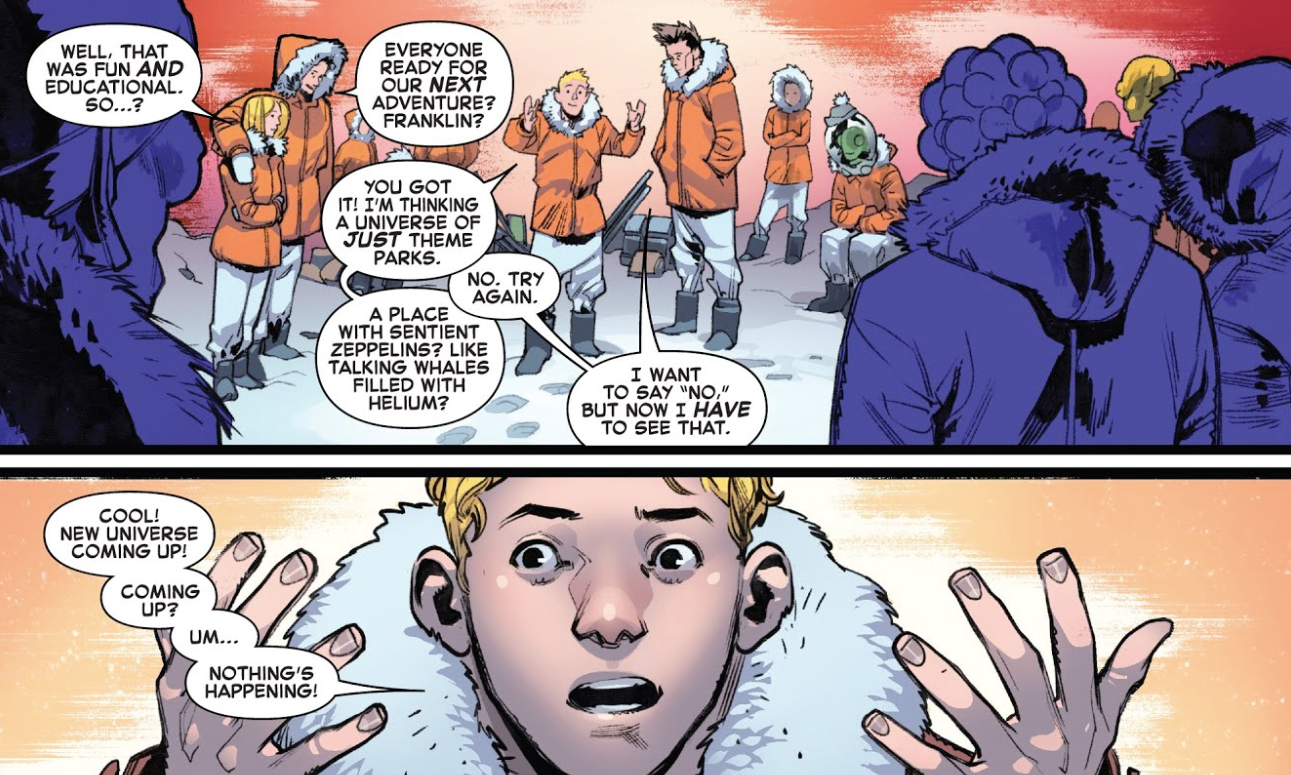 The way that Marvel’s gone back and forth between Franklin being essentially its most powerful character, capable of doing anything, and then just another superpowered kid with hero parents has often made it seem as if the publisher doesn’t really have much of an idea what to do with him. But the most recent ding on Franklin’s powers has paved the way for Jonathan Hickman’s Dawn of X to dig into some of the more unexplored elements of his existence.

Even though Franklin’s most often been depicted as a member of the Fantastic family and their Future Foundation, he’s always been a mutant. And so the mutants’ newfound ascendence on Earth has created the perfect opportunity for Xavier and the X-Men to step up and offer him a home with them. Unlike X-affiliated powerhouses like the Scarlet Witch and Jean Grey whose actions have so often led to the world fearing and hating mutants, Franklin’s always been presented as an avatar of positive creation. As a mutant born to (cosmically-empowered) humans, Franklin embodies Xavier’s classic vision of a world in which the two species could come together to live in a harmony that would drastically advance society as a whole. Reed might be content to let his son live out a normal life in which he doesn’t play god on a regular basis, but from the X-Men’s perspective, the time’s come for mutants like Franklin to lean into their full power with the express intent of ensuring that mutants are never endangered again. Which is precisely why Cyclops alluded to his plans to recruit Franklin way back in House of X #1. 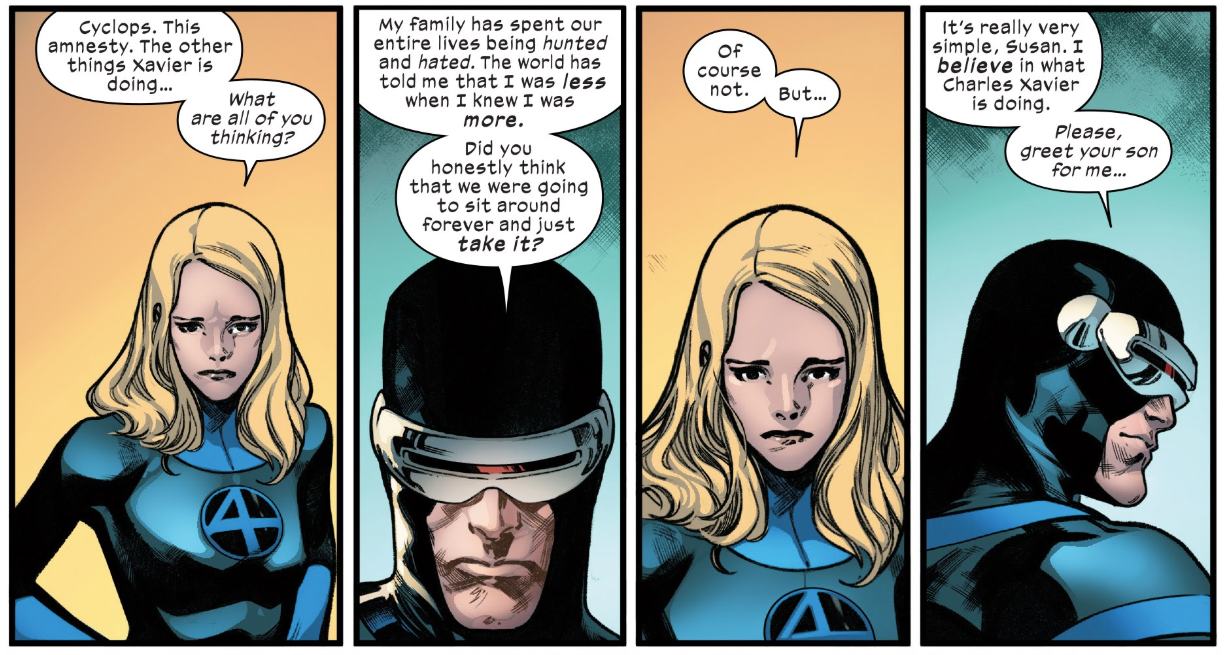 Perhaps even more than the Fantastic Four, the X-Men have decades of experience helping young people”with more unimaginable power than any one person should have”to learn how to channel their energies in constructive, heroic ways (with varying degrees of success). With their most recent plan to save their kind well underway and generally successful so far, it makes sense the X-Men set their sights on Franklin in the way that’s about to unfold in the pages of Chip Zdarsky and Terry Dodson’s X-Men/Fantastic Four that’s set to begin this week.

Just what they mean to do with Franklin is any one’s guess, especially considering what a strange and different direction the mutants have been going in as of late. It’s guaranteed, though, that when Xavier and co. come to make Franklin their offer, the Fantastic Four are going be none too pleased about it, and more than ready to fight.