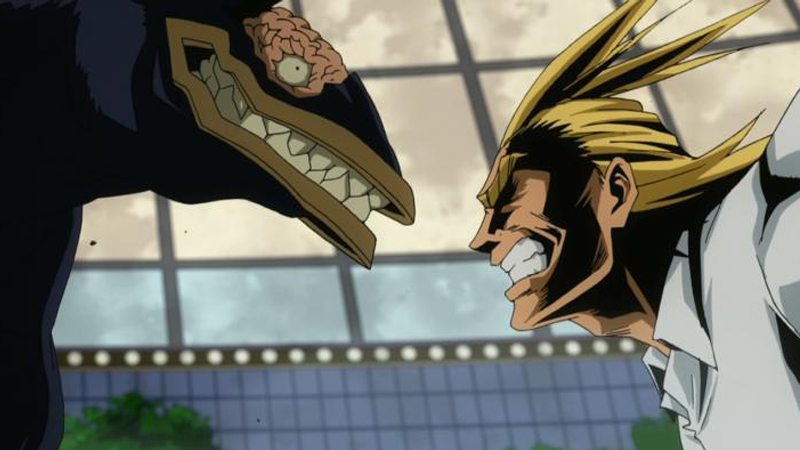 Even in the zany world of superheroic antics, the real world and the fictional interweave in myriad ways, whether it’s to comment on the society in which we live or to ground its fantastical highs in a sense of realism. Sometimes, however, it can go… well, a bit wrong.

My Hero Academia is riding high as one of Shonen Jump‘s most popular series, as well as its Western cinematic adaptation. The current arc of Kohei Horikoshi’s smash-hit manga has seen its heroes track down a villainous scientist named Daruma Ujiko.

He’s the creator of a race of genetically-modified golems called Nomu, made by transforming a human host into a being that artificially carries multiple “Quirks” (My Hero‘s term for superpower”the vast majority of powered beings in its universe are born with only a single Quirk), which serve as the primary villain organisation’s army. The Nomu have been one of My Hero Academia‘s longest-running threats, but their true creator has been a recent addition to the manga’s story.

What changed with the recent release of My Hero‘s 259th chapter last week, however, was that Ujiko’s name was revealed to be a psuedonym: the scientist’s real identity was Maruta Shiga, which lead to a backlash that will actually see Ujiko’s name changed for a third time when the chapter is collected in its paperback release. The reason is the word “Maruta””which, in Japanese, simply means “log””is a term used to refer to the experiments of a covert biological warfare research and development detachment of the Imperial Japanese Army in World War II, Unit 731.

Based out of the Pingfang district in the city of Harbin, Manchuria (the puppet state occupied by the Empire of Japan throughout the war after it invaded in 1932), a secretive project conducted by Unit 731 experimented on captured human test subjects through chemical research, vivisection, and the testing of traditional and biological weaponry.

The research was codenamed by various operatives at 731 as “Murata,” as staff at the facility”disguised as a lumber mill”would refer in code to test candidates as “logs” to avoid suspicion as to the complex’s true nature. Given Ujiko’s role in My Hero as an ethically-compromised geneticist, the connotation between his experimentation on the Nomu and the actual atrocities committed by Unit 731″after the war, it was estimated that up to half a million people lost their lives at the complex”lead to a fierce backlash from readers.

As Polygon reports, Shonen Jump issued a statement this morning from its editorial department, announcing a decision to alter Ujiko’s name in future printings of the chapter after discussing with Horikoshi himself:

“With regard to the character of Shiga Maruta, who was revealed in issue 10 of Shonen Jump (published 2/3), it has come to our attention that many find the name to reminiscent of “˜past historical events’,” Jump‘s statement reads (translated for GizmodoÂ by a Japanese-speaking coworker). “In naming the character, the author and editorial department had no such intention. However, so as not to associate the work with an unrelated history, having consulted the author, it has been decided to change the name in future publication.”

Horikoshi himself also took to Twitter today shortly after Jump‘s statement to release one of his own acknowledging the concerns:

“With regard to the reveal of Shiga Maruta’s character in the latest Jump, it seems many had the impression it related to historical events,” Horikoshi’s statement reads. “That was not my intention when naming the character. We’re taking your comments and will replace the name in the future.”