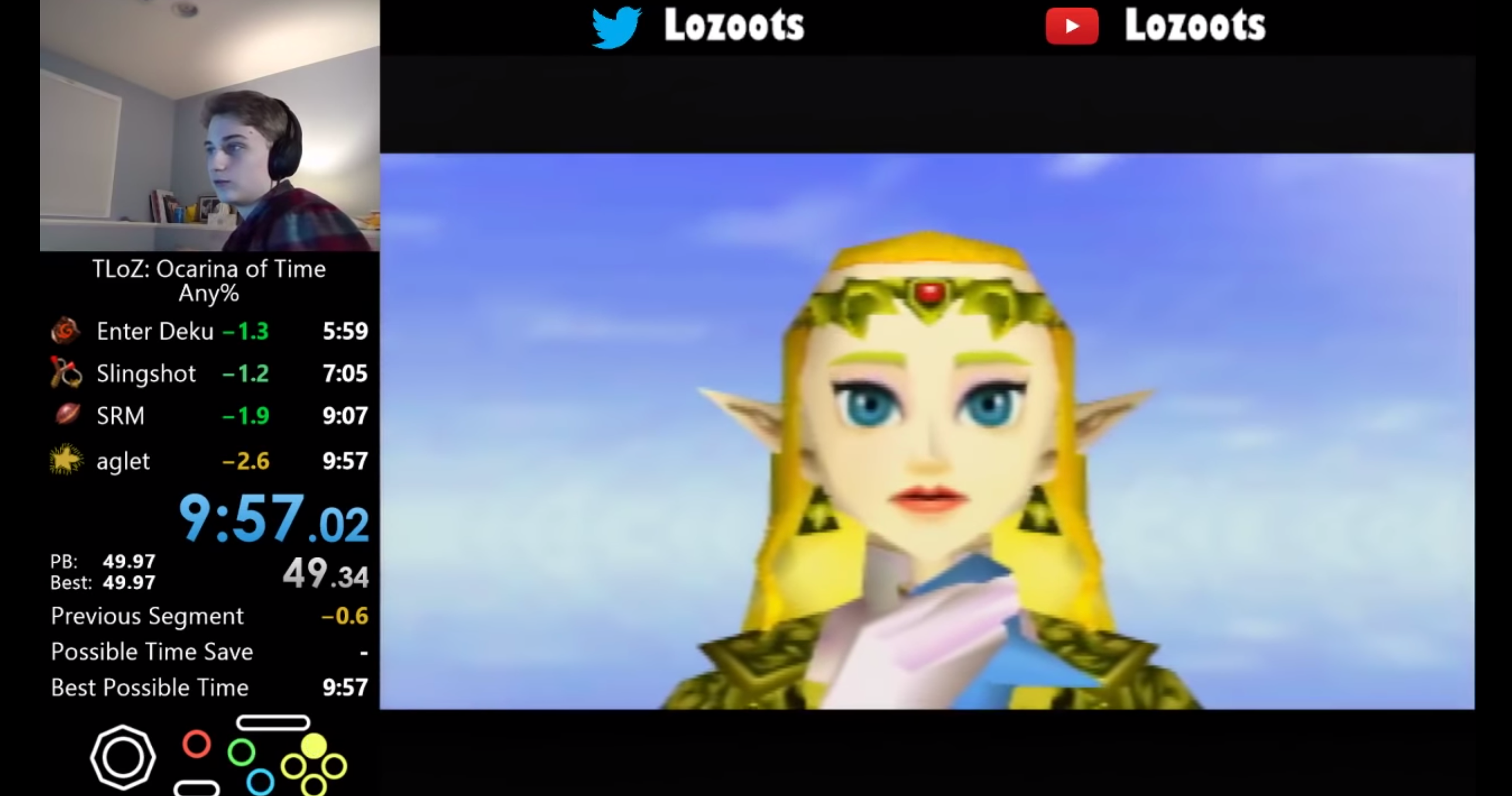 If you were a Zelda fan in 1998, you probably took your sweet time playing The Legend of Zelda: Ocarina of Time. Exploring the world could easily take days, and if you were like me or other unfortunate souls, you got lost in the now-infamous Water Temple. Speedrunners have whittled that wandering down over the years, and recently their runs have hit a new milestone: completing the game in under ten minutes.

Last month, we reported on developments in the Any % speedrun category for Ocarina of Time. Any % runs focus on completing a game as fast as possible using whatever means are available in the game. In Ocarina Any % runs, that means speed-generating “superslides” and performing tricks to leave the Kokiri Forest early. In some cases, it means taking advantage of glitches to warp around the game world. Records were shattered last month when a new warp was discovered. It allowed runners to leap right into the game’s credits. Since pretty much all tricks are on the table for Any % speedruns, that discovery led to a dramatic shift for Ocarina as a speedgame.

In the time since then, speedrunners have optimised their performance even more and found a different route through the game, incorporating an entirely different warp, to push the time under ten minutes. Two days ago, speedrunner Lozoots achieved a time of 9:59. He subsequently lowered that to the current world record: nine minutes and fifty-six seconds.

It’s all possible thanks to a trick called SRM, or “Stale Reference Manipulation.” This broad term refers to a set of glitches that allow players to overwrite the game’s memory values to affect actors and items within the game world. This makes it possible to perform “arbitrary code execution,” a process through which players can perform seemingly random actions that allow them to execute modified code. That’s the layman’s explanation; if you’re really looking for the details, you should check out this breakdown from Ocarina of Time speedrunner Fig. Using SRM tricks can lead to a variety of effects. In The Legend of Zelda: Majora’s Mask, it led to the discovery of a long sought trick: the ability to warp to the endgame segments on the moon. In other cases, using SRM is more playful. For instance, it’s possible to summon in unseen entities such as an enemy version of Star Fox 64’s arwing space fighter that was used to test enemy AI.

Ocarina speedrunners initially used arbitrary code execution to warp into the game’s credits, but a newly discovered warp adjusts the route. Runners can now warp into ending cutscenes. The run’s timer ends once the warp is completed. By using optimal movement and execution throughout the game’s early segments—the Kokiri Forest and Deku Tree—players can collect the necessary items to perform the actions for the code to execute. Older speedruns warped to Ganon’s Castle and fought the final boss.

The development of Ocarina of Time speedruns over the years has been astounding to see. In 2014, Narcissa Wright achieved a time of 18:10. By 2015, that time was defeated. Discovery of new glitches lowered the record further. This included the use of a glitch called “Get Item Manipulation,” which allowed runners to grab a bottle earlier than before. The item was essential for warping to Ganon’s Castle. Last year, the game finally achieved a time under 17 minutes. That process took nearly four years of runs and developments. SRM’s discovery completely changed the game, leading to times slightly under 13 minutes when it was first used. It remains to be seen if other categories will allow the use of arbitrary code execution. That will be determined by a community vote.

For speedrunners, there’s no such thing as a perfect run. From time to time, it seems that a game is as optimised as it could ever be, but there are always new tricks discovered or intense efforts by runners that invariably push times lower. Hitting times under ten minutes is a milestone, but in some ways, it’s also another day at the office. Ocarina of Time will get faster still. That could be this week in small increments, it could be in a few years with astounding new tricks. But it will happen thanks to the tireless efforts of skilled players.