One Punch Man Is About The Plight Of Being Too Powerful 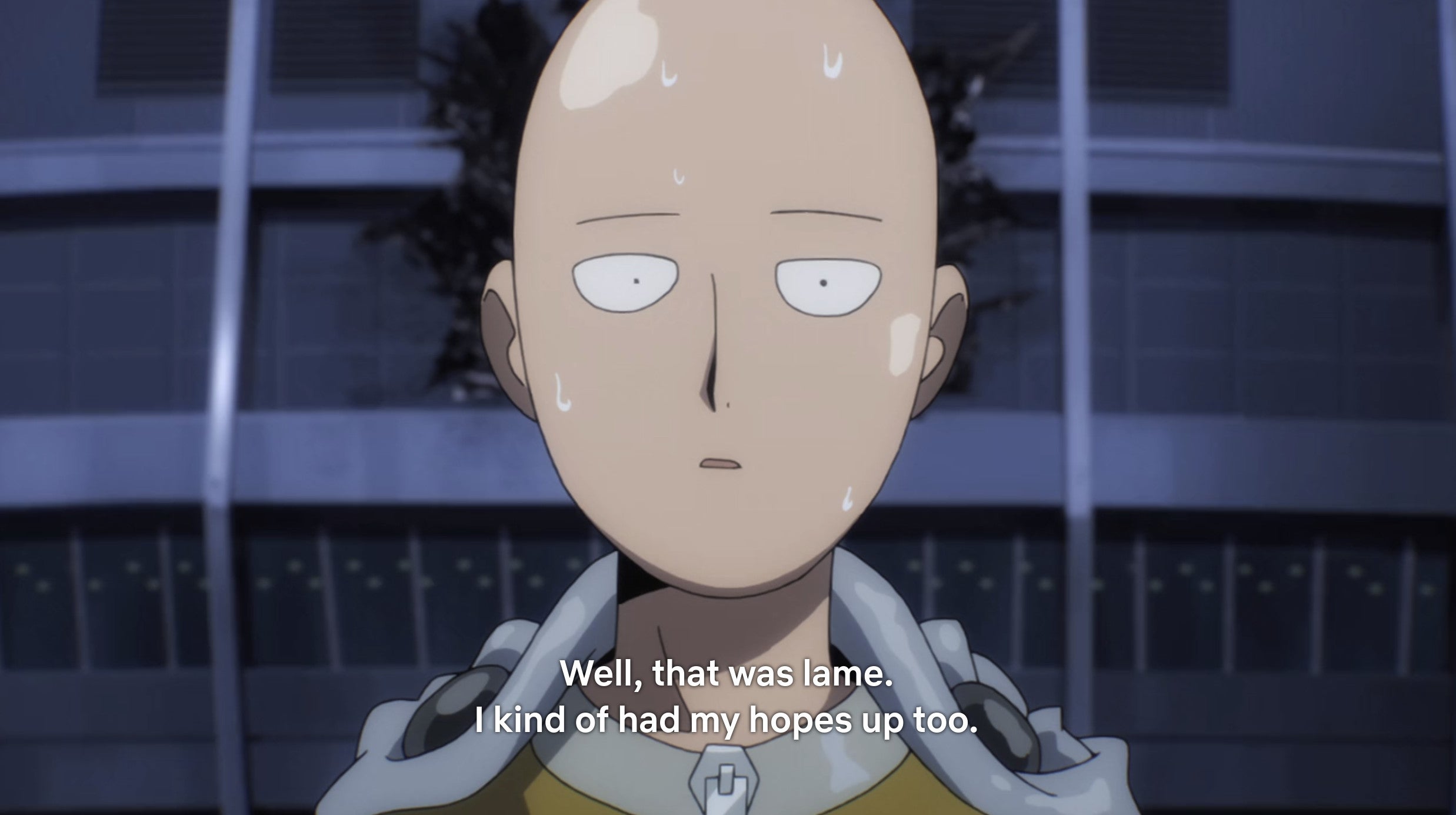 What’s it like to be the strongest person on the planet? If you answered that it’d be a boring depressing state of existential dread, then you’d empathise with the hero of One Punch Man.

One Punch Man is a superhero anime based on the Manga of the same name that combines action, comedy, and satire while spoofing many of the tropes endemic in the genre. The concept seems ingeniously simple. The hero, Saitama, is so strong he can defeat any opponent with one punch. Unfortunately, he’s become dissatisfied, as there’s nobody left to challenge him.

Most superhero stories have their characters gain their motivation through a personal tragedy. Take Bruce Wayne, who avenges his parent’s death by becoming Batman. One Punch Man doesn’t have that one defining moment. Even his origin story is lacklustre, as he didn’t gain his special power through mutations, genetics, or even wealth. He did it through a regimen of physical training that seems disappointingly commonplace. In line with his humble apotheosis, he doesn’t look the part of a superhero either, appearing more like an anime Lex Luthor than Superman. His baldness even becomes used in a gag as a group of thugs called Paradisers all have shaven heads and people mistake Saitama for one of them. 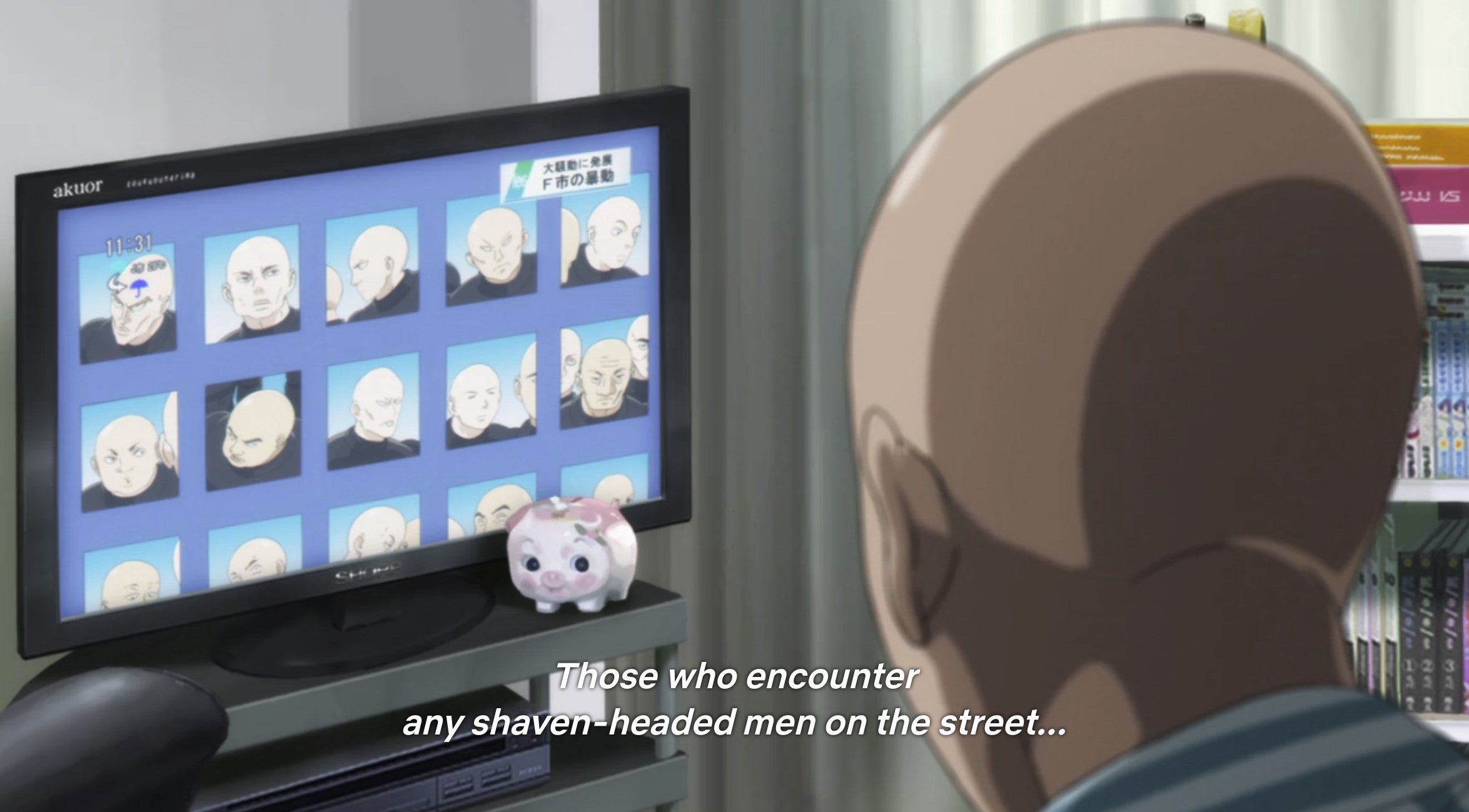 Saitama’s interests are hilariously banal. He’s more interested in making it in time for a market sale than he is in beating a diabolical villain. He does possess a general sense of right and wrong, so anyone who messes with the city he lives in gets a beating. But there’s no overbearing obsession or archvillain that pushes him to become stronger.

Villain monologues abound with each episode as they draw on anime tropes. Every nefarious being feels like they’re a victim, seeking justice by punishing a world that has wronged them. Before they drone on too long, Saitama shuts them up. He has no time for foreplay and wants to get to the fight itself, hoping someone will give him a worthy match. It always ends in disappointment with that titular one punch being enough to defeat the foe no matter how gargantuan or nasty they appear. The bigger they are, the more chunks of flesh and blood they become. 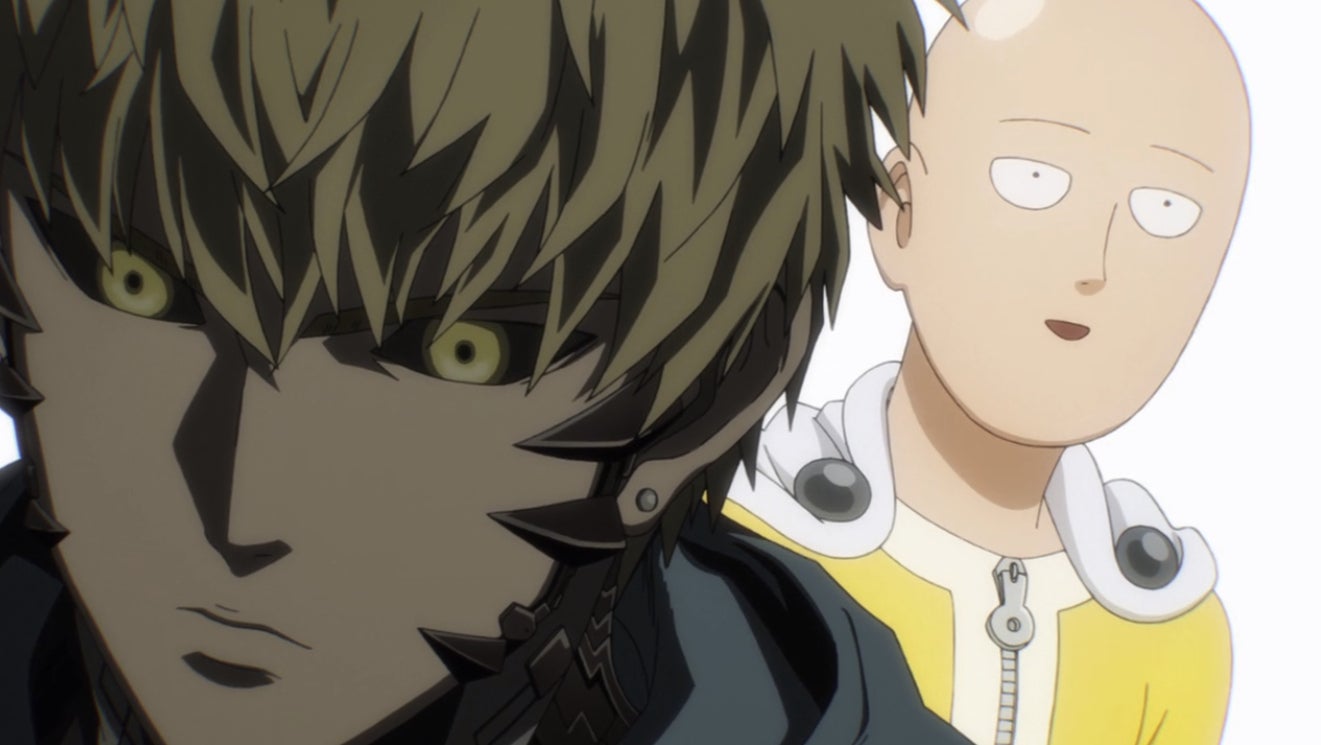 There isn’t much in terms of a character arcs. Saitama starts the first episode as an overpowered hero and ends the first season twelve episodes later, still unmatched and more powerful than ever. Saitama does gain a cyborg disciple called Genos who, through his internal thoughts, contextualizes Saitama’s awesome feats. That’s important because Saitama makes battles look so easy that people doubt it was difficult to begin with. Only through Genos’ narration do we gain confirmation that what Saitama just pulled off was remarkable.

Despite the lack of an arc, the show is still compelling. That’s because rather than the usual helplessness and angst humans face against overpowering alien forces, the ease with which Saitama destroys his enemies feels cathartic. Even though One Punch Man lacks dramatic tension, apart from the other heroes who usually take a bad beating until Saitama arrives, there’s no feeling like seeing an arrogant and disdainful super villain suddenly whimper in the face of overwhelming firepower, then beg to surrender (those who don’t get smart to their situation explode into pieces). It’s escapism at its most absurdly delightful. 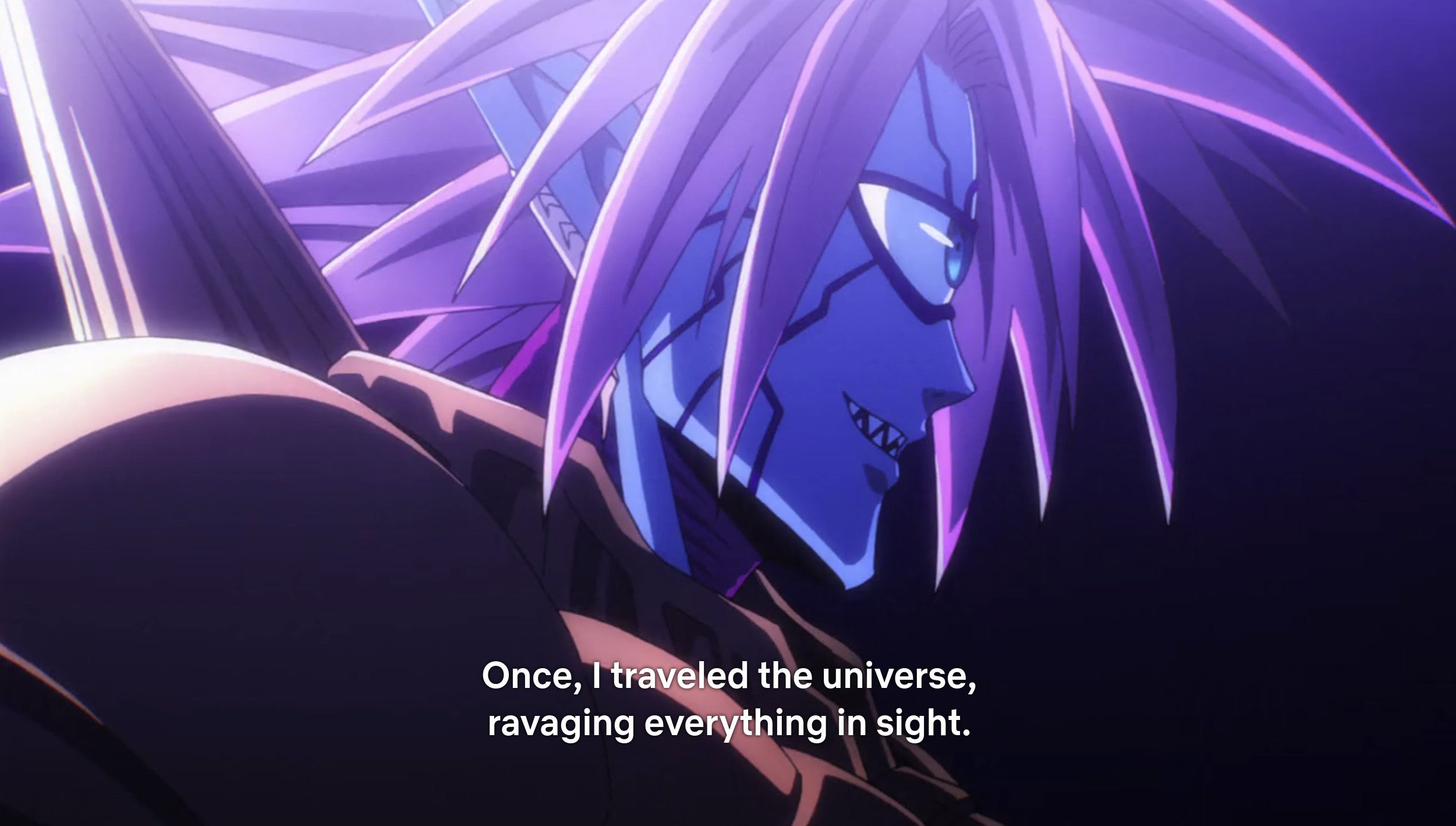 The closest Saitama comes to an actual competition is at the end of the season where he faces the “Dominator of the Universe.” Boros is a kind of Thanos and has destroyed one of the major city’s on the planet in his opening volley. He tells Saitama how he became too powerful and is tormented by an “utter, all-encompassing boredom.” In essence, he’s Saitama’s one-eyed reflection.

He’s come to Earth because a seer told him there existed a “being who could rekindle” his passion for battle on the planet. “Give stimulation to my existence,” he pleads with Saitama. 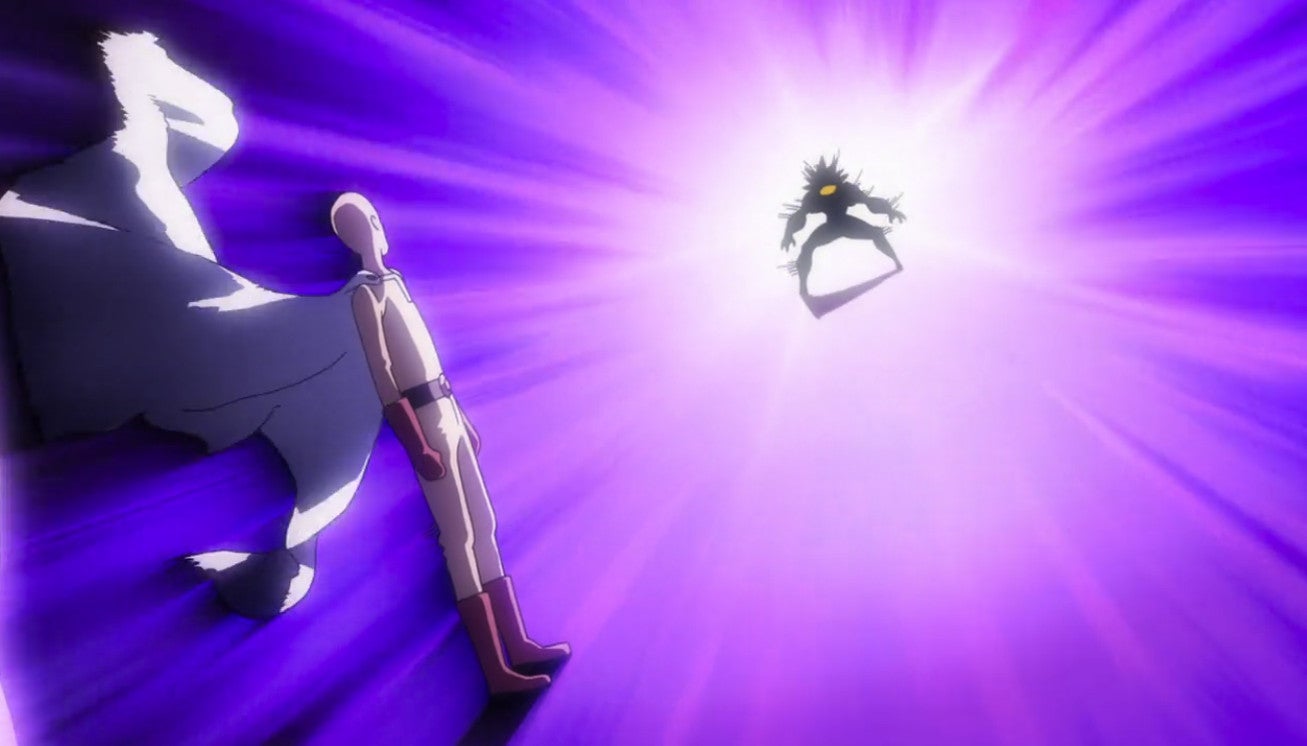 Saitama punches him once, destroying his armour. But miraculously, Boros survives the punch, which is a first for the season. Boros undergoes a Hulk-like mutation as his power is unleashed. What’s so humorous about these scenes is that the villain is drawn in super detail, every muscle and vein carefully composed, while Saitama looks like a quick sketch with the bare details of his egg-shaped head and yellow uniform on screen. The art reflects the dichotomy of their effort. The dominator’s punches are so hard, one of them flings Saitama all the way to the moon. Saitama is delighted and rushes back to Earth.

Boros’ final attack is a “Collapsing Star Roaring Canon” that’s a psychedelic blast of unbelievable energy. Not to be outdone, Saitama responds with the “Serious Series: Serious Punch” that’s so serious, the clouds across the planet part like the Red Sea. Boros is defeated, but he dies content that he had a good fight. 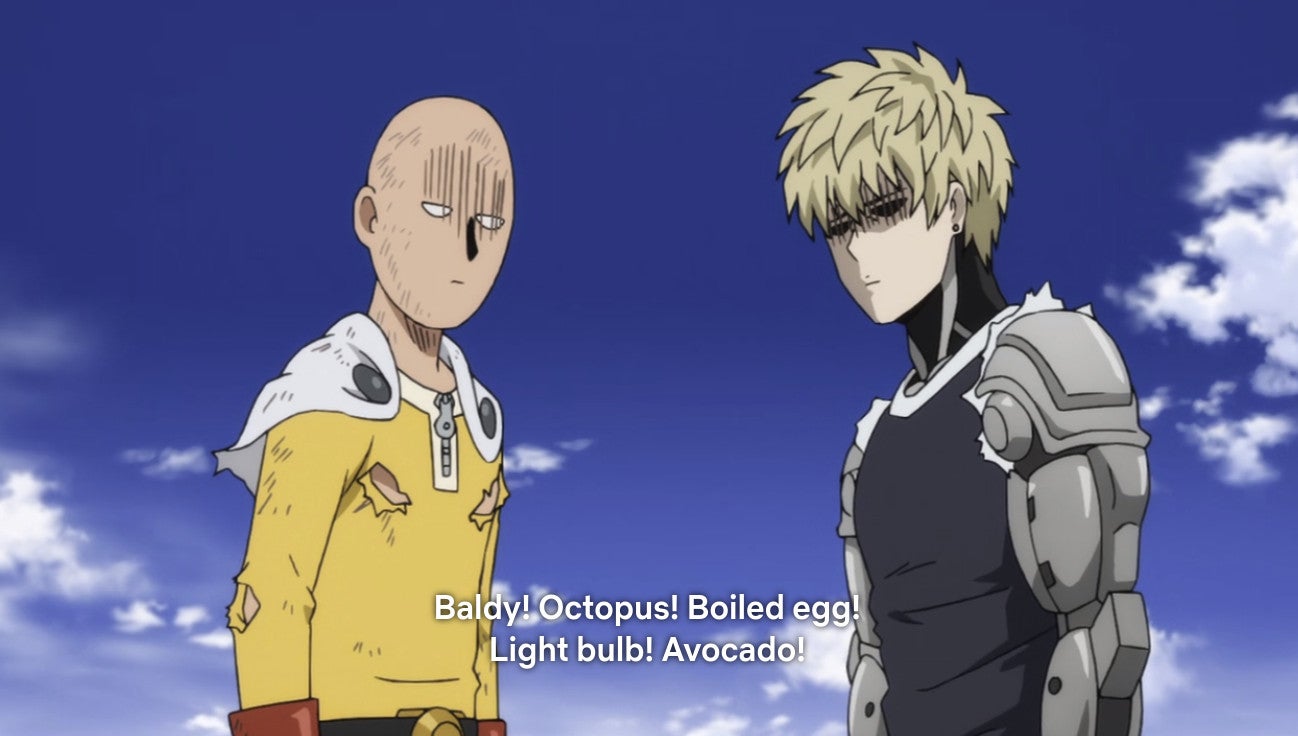 There are deeper questions One Punch Man posits about a culture obsessed with superheroes. How do creators keep on upping the stakes and make it interesting for fans who’ve already seen it all? Is there a point where it all starts to feel recycled? The anime also makes a wry commentary on the politics of social image, self-promotion, and public perception, as the superheroes manage their publicity. Despite being the most powerful person on Earth and continually saving the planet, Saitama rarely gets credit and is often faced with criticism and accusations of cheating.

One Punch Man’s existential crisis is easily our own. The anime excels because it embraces the absurdity of the genre and revels in destroying tropes with every fist. Reversing the expectations of the genre, we pray Saitama can finally find someone to defeat him, and in that act, find salvation from the tedium that threatens to crush his, and our, existence.