Pikachu beating himself up. (Image: Netflix)
To sign up for our daily newsletter covering the latest news, features and reviews, head HERE. For a running feed of all our stories, follow us on Twitter HERE. Or you can bookmark the Kotaku Australia homepage to visit whenever you need a news fix.

Pokémon: Mewtwo Strikes Back—Evolution is a remake in the truest sense of the word. If you’ve seen the animated film from 1998, Evolution’s story of a vengeful Mewtwo seeking to assert its dominance over humanity and naturally born Pokémon will ring familiar, as it more or less recreates every scene from the original shot for shot.

Like Detective Pikachu, Evolution relies heavily on nostalgia in order to sell you on these drastically re-imagined visions of the Pokémon universe. But where Detective Pikachu presented a realistic world in which flesh and blood people walked alongside pocket monsters, Evolution exists in a somewhat more uncanny space that’s closer to the 2D animated series.

Evolution’s style gives the movie a number of different opportunities to revisit classic scenes in ways that, technically speaking, are more visually complex and reflective of how CGI animation’s advanced since the late ‘90s. But because the two film’s stories are effectively carbon copies, it’s difficult not to compare them to one another and see how, despite all of its fancy new moves, Evolution can’t hold a candle to the first Mewtwo Strikes Back.

In both Mewtwo Strikes Back and Evolution, Ash Ketchum, his friends, and a variety of other Pokémon trainers are all thrust into a fight for their lives after they all receive mysterious hologram messages inviting them to participate in an exclusive battling contest on the distant New Island. Though the trainers all initially assume that the invitations came from an extravagant Pokémon trainer looking to have a little fun, what they don’t know is that they’re actually from Mewtwo—who, years previously, first emerged from the birthing tank where he was genetically engineered by the mad scientist Dr. Fuji and Giovanni, the head of Team Rocket.

Compared to more recent Pokémon movies set in other regions, Mewtwo Strikes Back (and Evolution by extension) featured a relatively simple, straightforward story that served as one of the first major glimpses of the wider world beyond Kanto that the Pokémon anime had only begun to hint at back in the ‘90s.

Rather than trying to wow audiences with big action set pieces, the movie instead went the existential route as it chronicled Mewtwo’s struggle to understand his place in the world as a cloned Pokémon, a concept that further complicated the franchise’s already questionable premise about a world in which children enslave monsters and force them to fight under the pretense of building friendships.

Physically powerful as Mewtwo is portrayed in Mewtwo Strikes Back, it’s the Pokémon’s seemingly human intellect and his ability to reflect on the circumstances of his life that made him such a compelling, fascinating villain when he was first introduced. Unlike most other Pokémon who go through life seldom questioning their societal roles, the nature of his existence is essentially all Mewtwo can think about—specifically the fact that he’s cloned from the DNA of Mew, one of the first Pokémon from whom all other species descended.

Mewtwo Strikes Back was able to convey Mewtwo’s undeniable otherworldliness simply by giving the Pokémon far more screen time than it ever enjoyed in the animated series, which allowed you to take in the full scale of his sizeable psychic powers.

In both the anime and the series, there was nothing quite like seeing Mewtwo lording over a terrifying secret island layer where he commanded an army of fellow cloned Pokémon. But because the movie’s animation style was so in line with the series’, you could easily read it as being set in that familiar world, which had the overall effect of making things feel more grand and fantastical. Mewtwo Strikes Back’s fighting scenes particularly shined because, while they rang true to the anime series in an aesthetic sense, the combination of the movie’s dynamic “camera” movements coupled with 2D animation tricks made everything just feel slick and fast-paced.

Evolution, by comparison, is an entirely CGI movie, and while it does a solid job of recreating various scenes, there’s something about its hyper-crisp visuals that feels decidedly cold and uncannily inorganic. While Evolution doesn’t try to convince you that it’s taking place in the real world, the whole of the movie feels as if it was put together with real-world physics in mind that clash with its cartoonish character models.

As Ash and Pikachu rush into battle, the wind blowing through their hair and fur is impressive, but something about it is amiss. While the movement feels “real,” at the same time, you’re staring at character designs with impossible proportions running around in environments that you could easily see as being small, hyper-detailed dioramas.

In scenes like when the trainers all convene in a Pokémon centre near New Island—which feels as if it were plucked out of a game like Pokemon Let’s Go Pikachu—this isn’t so much of an issue. But by the time everyone meets Mewtwo for the confrontation he’s planned, everything from the lighting to the action itself feels just short of the intended mark. 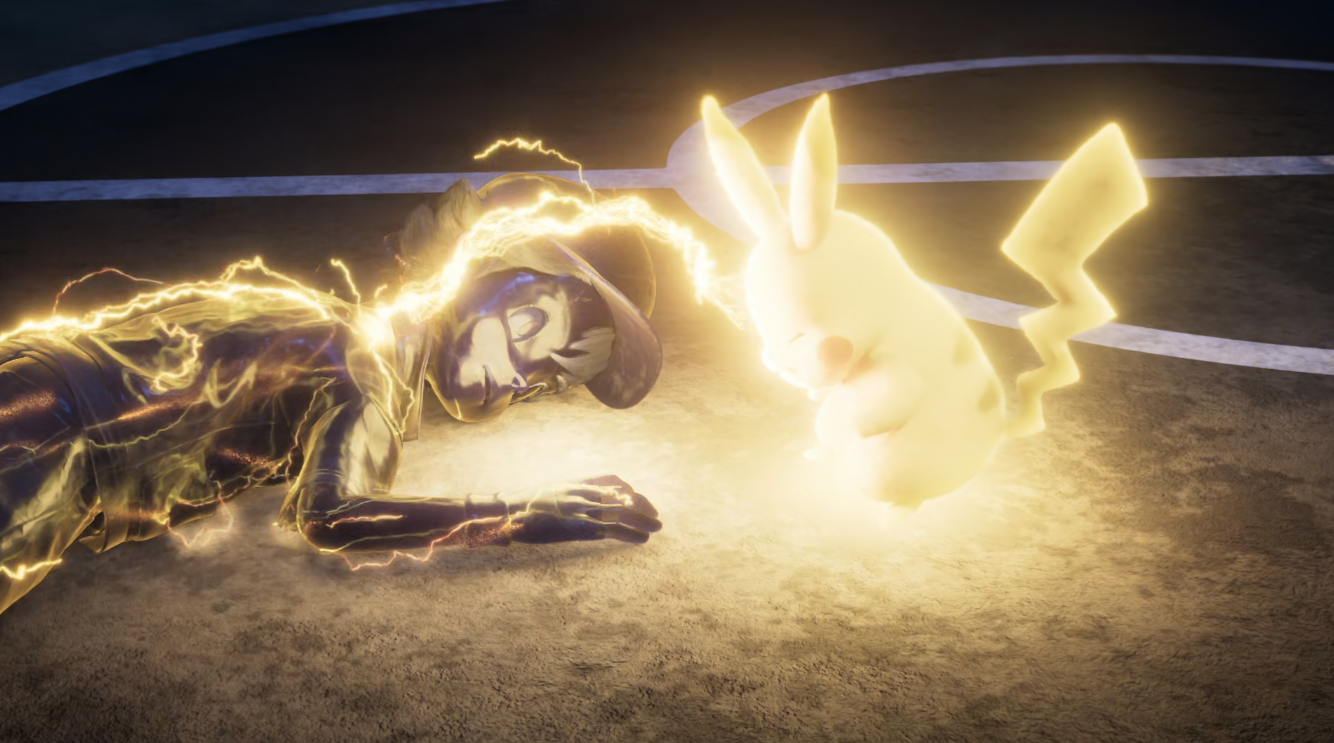 Pikachu attempting to revive Ash by shocking him. (Image: Netflix)

The added physical depth to Evolution’s style has the unintended consequence of making the movie’s action feel hollow and somewhat lifeless because there’s simply more information for your eye to perceive in any given shot. When Mewtwo channels his psychic powers into balls of concussive energy, or when Mew uses its own energy to create force fields, they’re rendered as translucent spheres that take up physical space, but here, they’re these shiny, jiggling bubbles that don’t make you think “oh, these Pokémon are about to fight.”

Pokémon being flung through the air in the midst of battle move somewhat more slowly so that you can take in more of what’s going on around them, but this also strangely makes the models feel more like action figures being waved around by an invisible hand.

Like Mewtwo Strikes Back, Evolution culminates in a tragic moment in which Ash unwittingly sacrifices himself to end the fighting between the organic and cloned Pokémon, and it seems as if the young boy is fated to die as all of his friends and Pokémon tearfully look on. The Pokémon’s tears are what brings Ash back to life, but because Evolution never really manages to make it feel as if there’s a heart beating beneath its glossy visuals, his revival scene is far from moving—which, to be fair, was also somewhat true for people who weren’t children when they first saw Mewtwo Strikes Back.

This isn’t to say that there’s nothing redeeming about Evolution. Even though the movie’s visuals might not always be stellar, it’ll still be a potent shot of nostalgia for those who loved the original. It also speaks to the fact that the Pokémon Company is willing to play around with new approaches to storytelling as the Pokémon franchise continues to chug along. Let’s just hope that going forward, the company keeps in mind that there’s more to bringing good stories to life than simply splashing a new coat of paint on old classics.