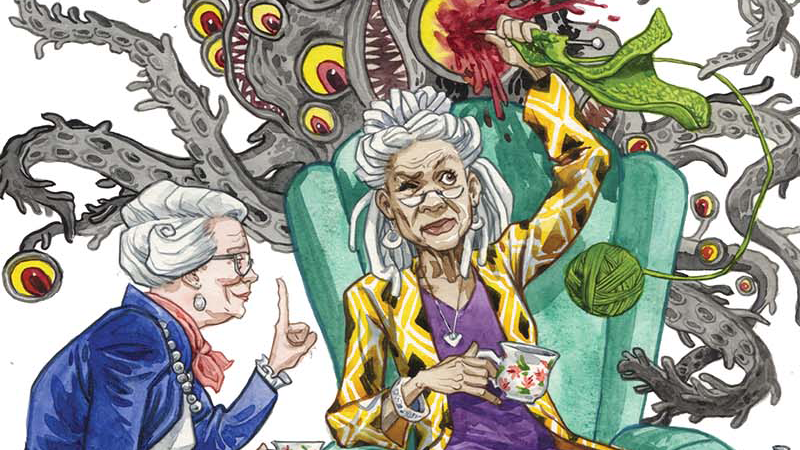 Knitting’s all fun and games until someone loses an eye. (Image: Jill Thompson, Ahoy Comics)

I mean, you gotta have something to do between knitting and baking. Why not fight eldritch horrors?

We’ve got a first look inside Ahoy Comics’ latest supernatural series, Ash & Thorn, where the saviour of the day isn’t some muscle-bound superhero or a scantily-clad femme fatale but instead, a little old lady named Lottie Thorn.

Penned by Mariah McCourt and with art by Soo Lee and Pippa Bowland, Ash & Thorn follows Lottie as she’s confronted with the revelation that she is part of a fated mystical lineage, and she alone can stop the oncoming apocalypse. Well, at least with a little help from fellow mystic Lady Peruvia Ashlington-Voss, who takes on Lottie’s tutelage in the way of monster fighting mania.

“Ash & Thorn is the kind of series I’ve always wanted to write; little old ladies, horrible monsters, mystical baking, and trope subverting!” McCourt told Gizmodo over email, exclusively. “Lottie Thorn is, without a doubt, a character in honour of all the older women I’ve been lucky enough to know. Both of my grandmothers were big influences on me. My art teacher, Myril Adler, taught up until she passed away at 95 and her studio was a safe, creative place, where I learned so much about art and storytelling. My mum (but don’t tell her I said she’s older!), who deserves to see herself in stories. The characters I grew up admiring, Miss Marple, Granny Weatherwax, the Golden Girls. Little old ladies are often overlooked and I think that’s 1) a huge mistake, and 2), an opportunity for this story to show them as the heroes most of us know they already are.” 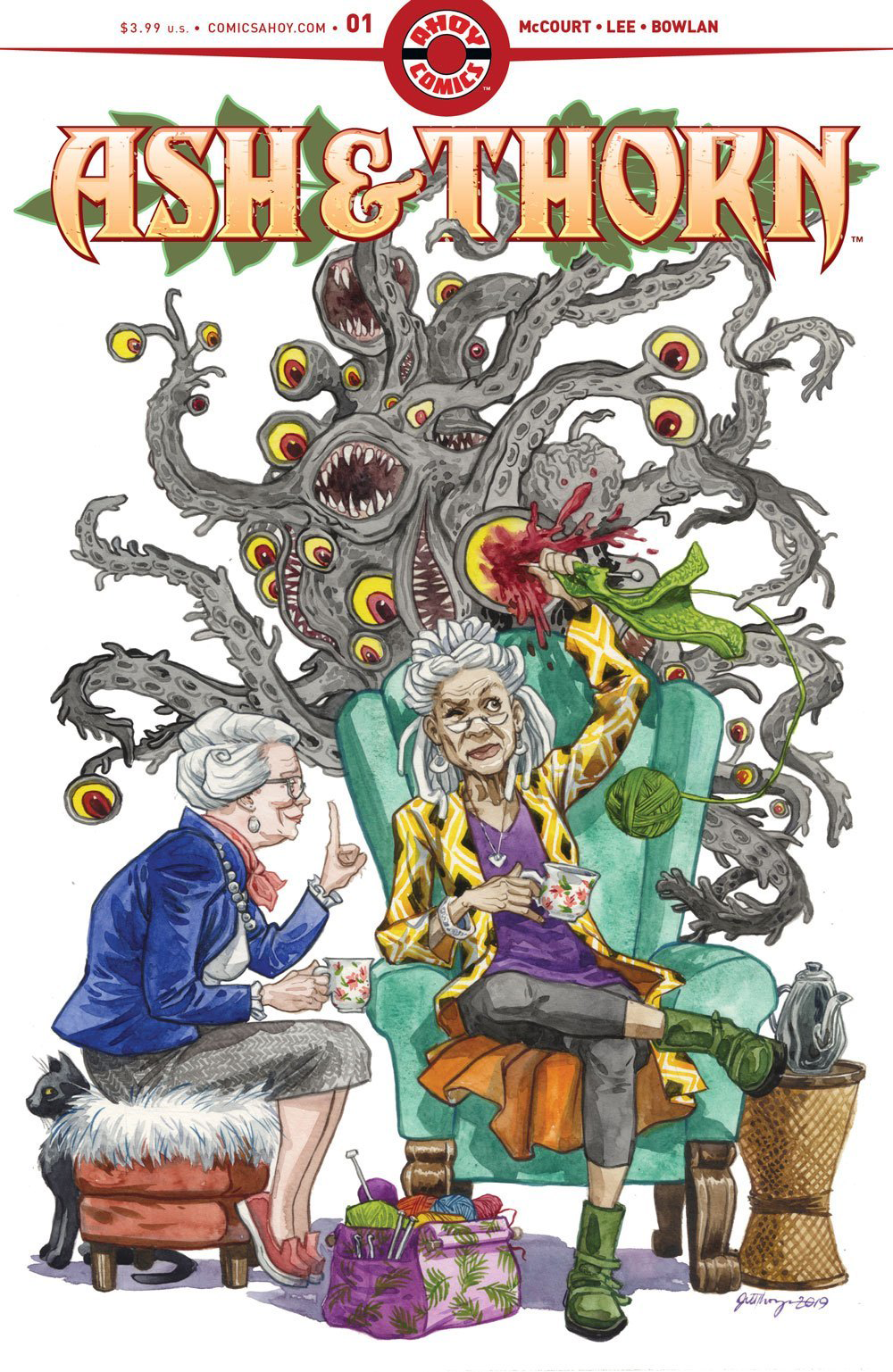 McCourt sees Ash & Thorn as a humorous series, but one whose humour is not rooted in mocking its elderly heroes. “This series is an homage to all the people and stories I’ve loved, a kind of Golden Girls meets Buffy by way of Stranger Things in tone,” McCourt added. “We’re not making fun of ageing or being older, we’re poking fun at the classic tropes of ‘The Chosen One’ and ‘Last Girl Standing’ and asking, what if young, nubile heroes aren’t available? What if a big bad has to contend with an older, wiser, out-of-fucks-to-give older woman?”

But that’s not to say that Lottie and Peruvia’s adventures will be all fun and games (and baked sweet treats). After all, there is an apocalypse to contend with.

“While the series is funny it’s also very much a horror tale and it gets very weird and visceral as it goes along,” McCourt noted. “The end of the world might be absurd, but it’s also terrifying, and there are choices each character has to make that have major consequences. Not everyone is going to make it, and even if they do, they won’t be able to look at the world or themselves the same way again.”

You can check out a look inside the first issue below, which shows off Lee and Bowland’s work on bringing Lottie and Peruvia’s dark comedy adventure to life. 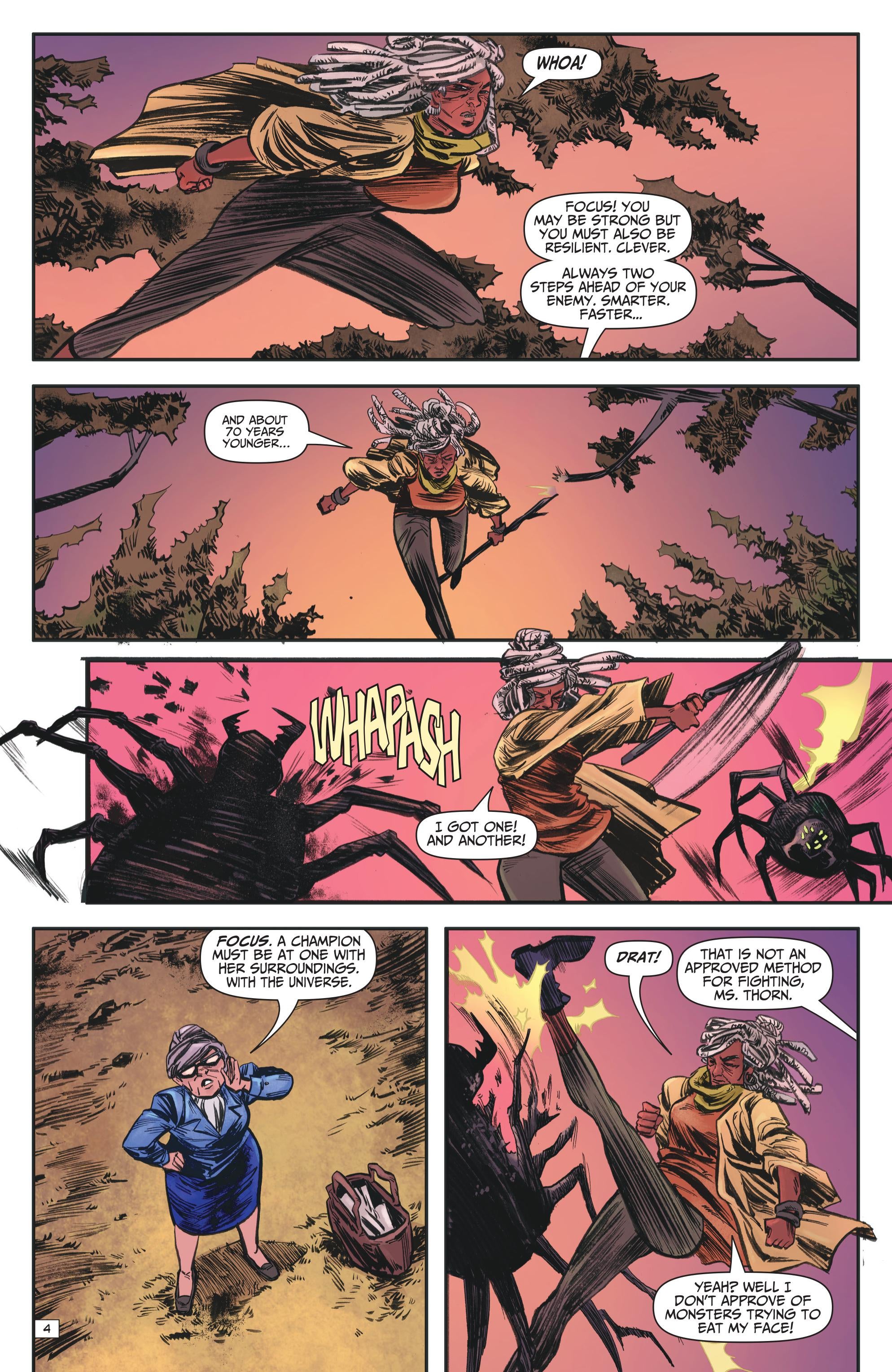 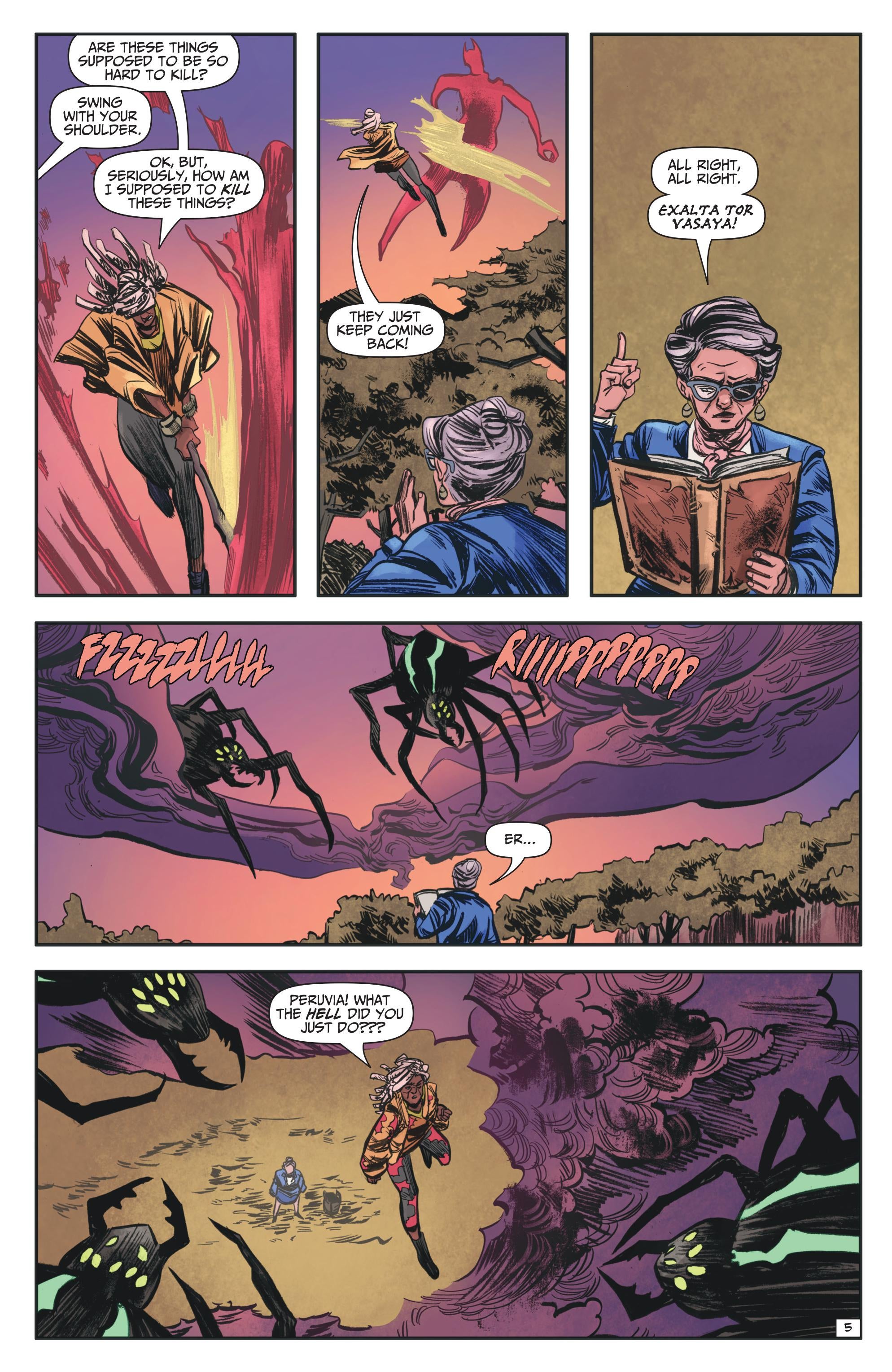 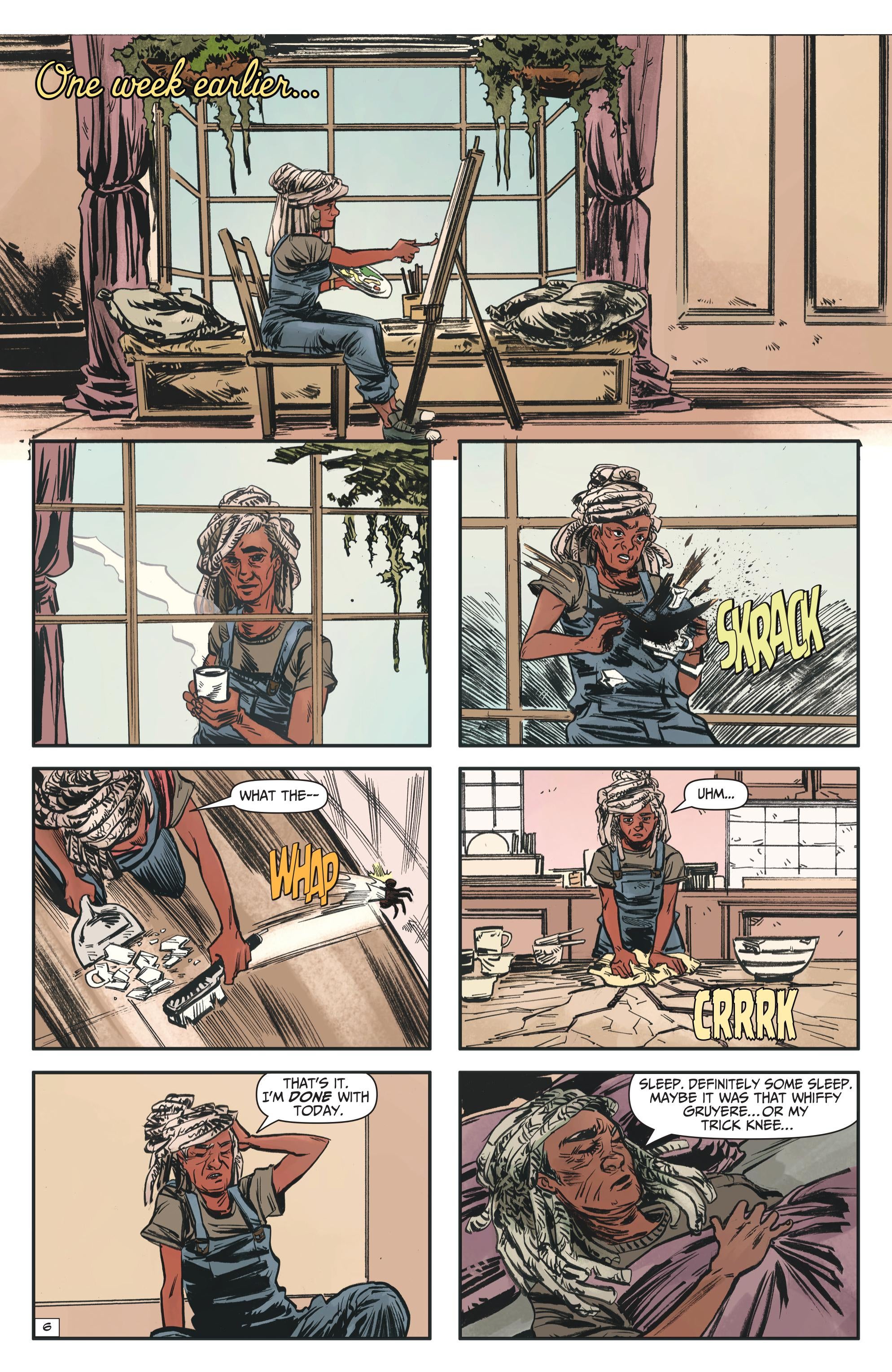 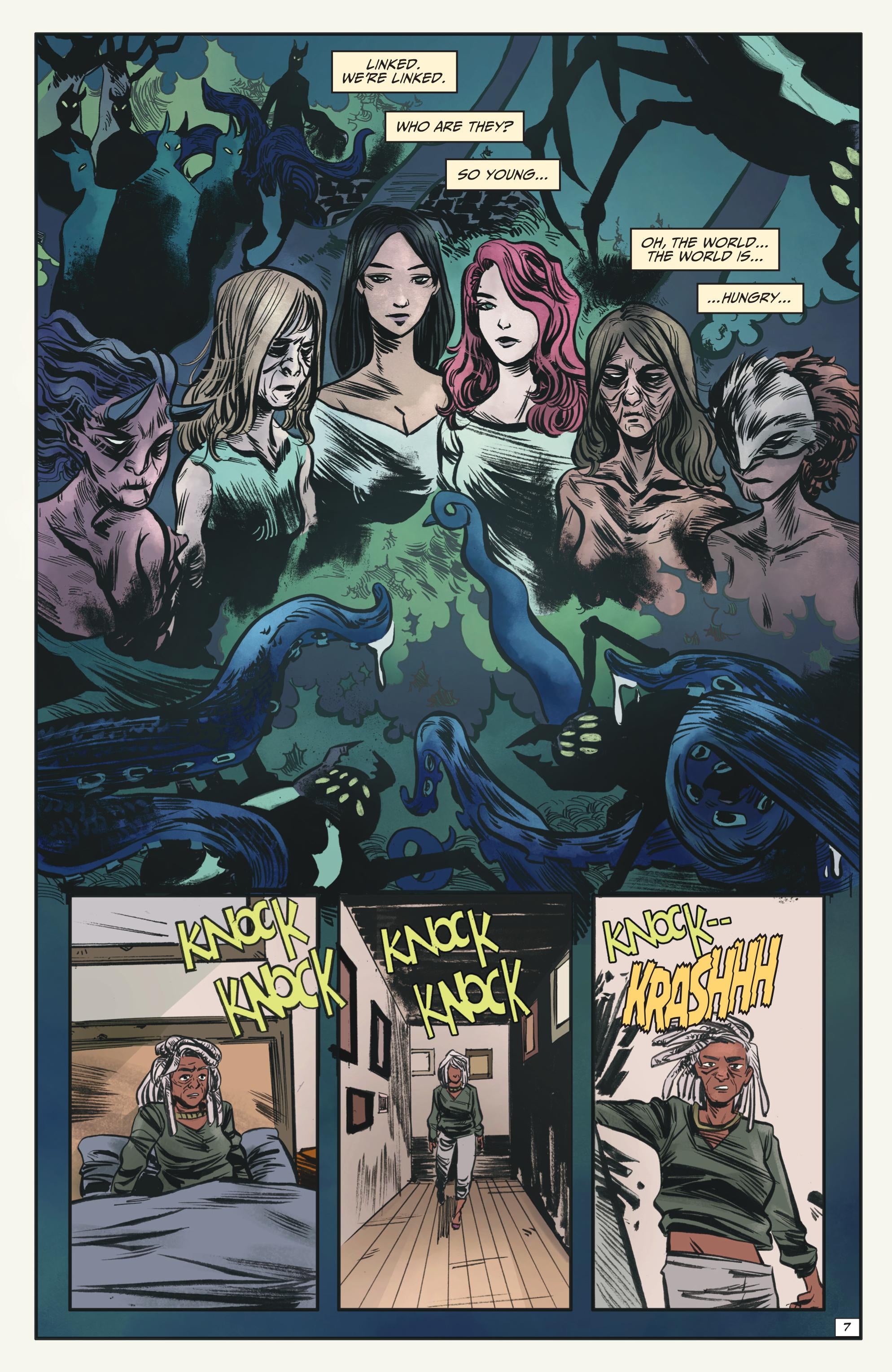 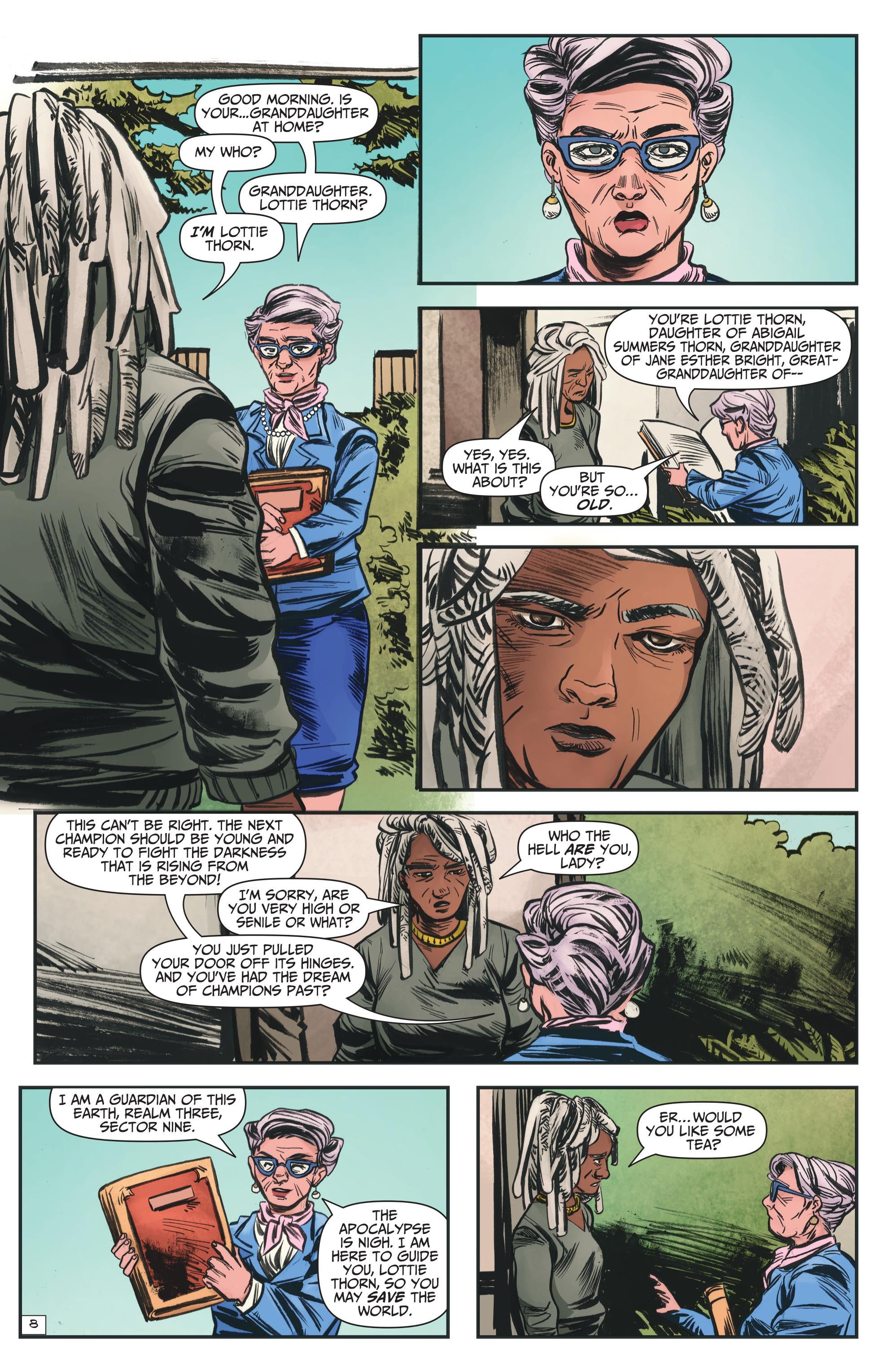 “Soo Lee and Pippa Bowland have done an incredible job with balancing the horror and humour in this series so that every scene, whether it’s a battle with creepies or stress baking, is engaging and evocative,” McCourt concluded. “Jill Thompson’s covers are so perfect I have to pinch myself, no one can paint a gross monster getting skewered by a knitting needle with such effortless playfulness. We’ve got a logo by Todd Klein, edits by Sarah Litt, and Ahoy is the perfect place for such a strange little tale. We’ve got a lot more stories planned because where there’s one apocalypse, well, there are probably more. And while Lottie and Peruvia are older, we can always learn and grow, whether it’s a new battle strategy or a new pie recipe.”